Mara Haseltine is a geotherapy eco sci-artist — a mouthful I know, but she is both a scientist and an artist, combining the disciplines — and an environmental activist, from New York. Presently self-isolating in Cambridge, MA.

She has been recreating renderings of microscopic plankton and cells into large 3-D art pieces for a while. You may have even seen them. With a team of scientists and engineers, she’s currently working on a viable reef restoration project, which is what caught my attention, besides her glowing things…

So diverse and fascinating is the work that I had to have her explain it to me.

“All of my work addresses the link between our cultural and biological evolution,” she begins.  “Now more than ever with the current pandemic affecting our species, our relationship with the natural world has come into sharp focus. Without a cultural shift in which humanity creates a symbiotic relationship with the natural world, we will be the cause of a mass extinction event.” 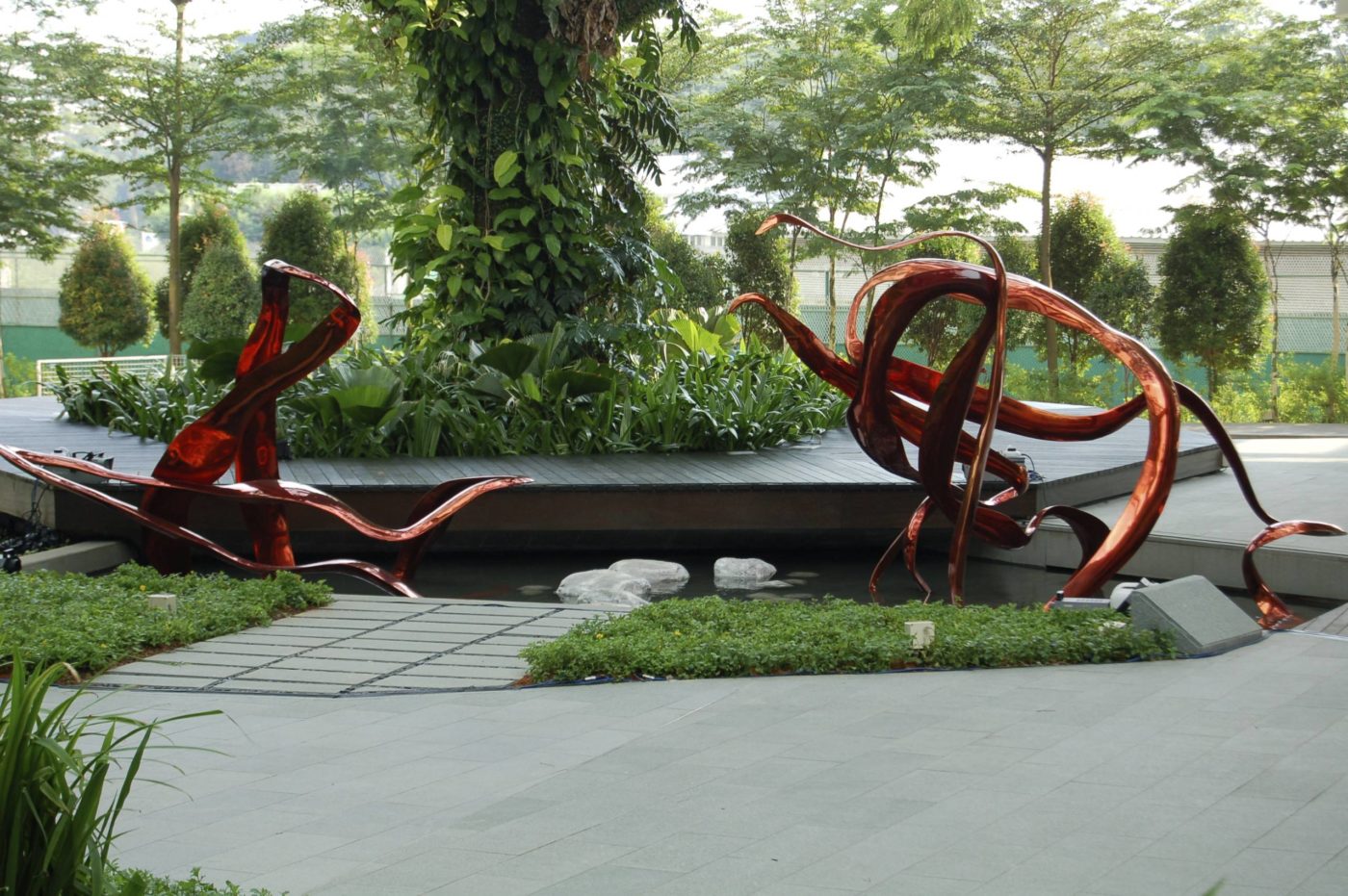 A 2006 Installation, SARS Inhibited at Singapore’s biotech mecca, Biopolis. Pretty topical, as it’s the same shape as the active cleft of COVID-19

How do you bring about this cultural shift?  “My technique is to use art to inspire and create awareness. Art has the power to influence real change because of its ability to evoke human emotion more than scientific facts or statistics can. I make the invisible visible, frequently using microscopic forms and enlarging these forms to megascopic proportions.

“These unseen shapes on a cellular, molecular, and sub-molecular level connect the delicate web of all life in our shared biosphere. As a sculptor, I am amazed by their exquisite shapes which often seem to defy gravity, and how form follows function and function follows form. I’m working on a series entitled Blue Prints to Save the Planet — the idea is to create optimistic alternatives to traditional building and manufacturing practices in the face of climate change.”

Art, she says, is a fantastic way to highlight these practices. Her first project for this series is called the Rococo Cocco Reef, an underwater sculpture that will double as a habitat for fish and coral.

“The muse for the Rococo Cocco Reef is unicellular plankton called a coccolithophore. Coccolithophores play a crucial role in balancing the atmosphere.  When alive, coccolithophores create large “blooms” which produce copious amounts of life-giving oxygen. After they die, their skeletons, which are composed of calcium carbonate, sink to the ocean floor and sequester carbon dioxide.

“It’s these skeletons that I based my design on. I will be combining two sustainable reef restoration techniques to create this work, both of which do not use concrete — It is a little-known fact the manufacturing of concrete is a major contributor to the depletion of our ozone layer.  The first is called Biorock, developed by the German architect Wolf Hilbertz, which is a method of applying light volts of electricity to accrete calcium carbonate on metal structures. Calcium carbonate is the same material that shells, coral skeletons, and many plankton skeletons are made of. The base will be an abundant coral garden made with a novel reef material, Oceanite from IntelliReefs. It’s a matrix of minerals developed specifically for diverse coral growth and integration with local eco-systems.

“What I really find elegant about the Rococo Cocco Project is that the reef sculpture itself will actually be made of calcium carbonate! Biorock has the added benefit of boosting the immune system of the life forms that grow with its light field of electricity, which is an excellent advantage in the age of climate change.  The second method is a combination of minerals that create a porous building material which utilizes nanotechnology and promotes the growth of corals that have improved resistance to the stressors of climate change.”

Our interview took place at a safe social distancing of about 3000 miles. 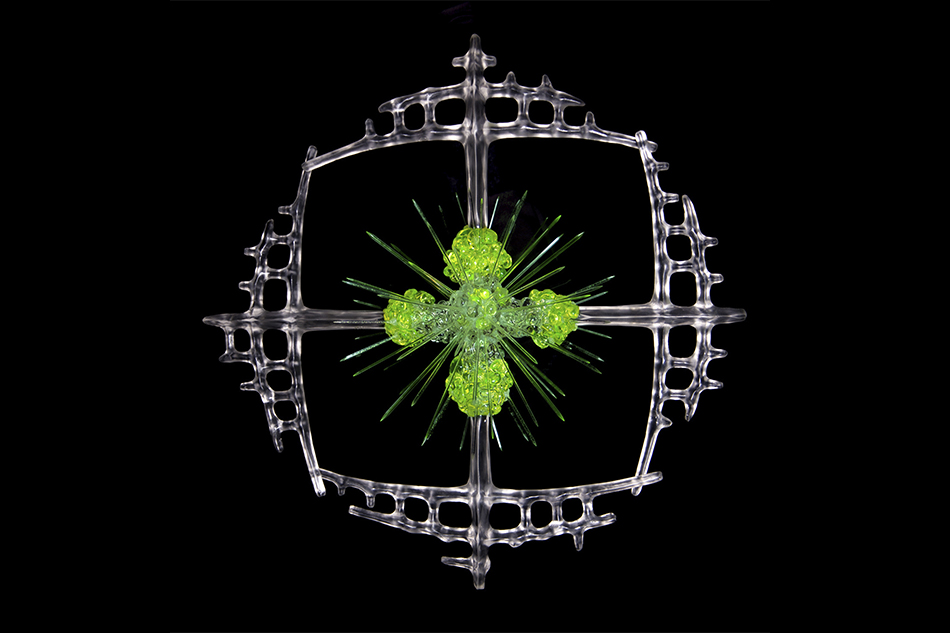 Cast lead crystal and uranium infused hand blown glass of a Lithoptera, single-celled plankton, as it is seen under the microscope (30 x 30 x 15cm)

When did you start photographing microscopic things and making them into large form 3-D art pieces for everyone to experience?

In 2003, when I was working with The Human Genome Project. I developed this concept of creating a garden in the shape of an animal cell, and so I looked at the proteins and the ribbon diagrams of the proteins which show their energy curve, and I thought how can I make this? It seemed so complicated to make it by hand. I contacted Michael Rees who was my mentor in college and one of the first artists to start using digital technology to make their art. Now there’s a lot of rapid prototyping in art, but at that point, it was basically only used in car manufacturing, so I got the data from the protein data bank, then fed it into the computer, then it was digitally output by a company that works with cars in the military, actually.

Your colors are incredible and you use hand blown glass?

We infuse glass with uranium sometimes so that it glows under a black light. Uranium glass was first developed in Philadelphia. I like the idea of making things with uranium. The uranium is very toxic, but it becomes contained in the glass so it becomes nontoxic. I mean, I made some goblets out of it that you can drink out of. 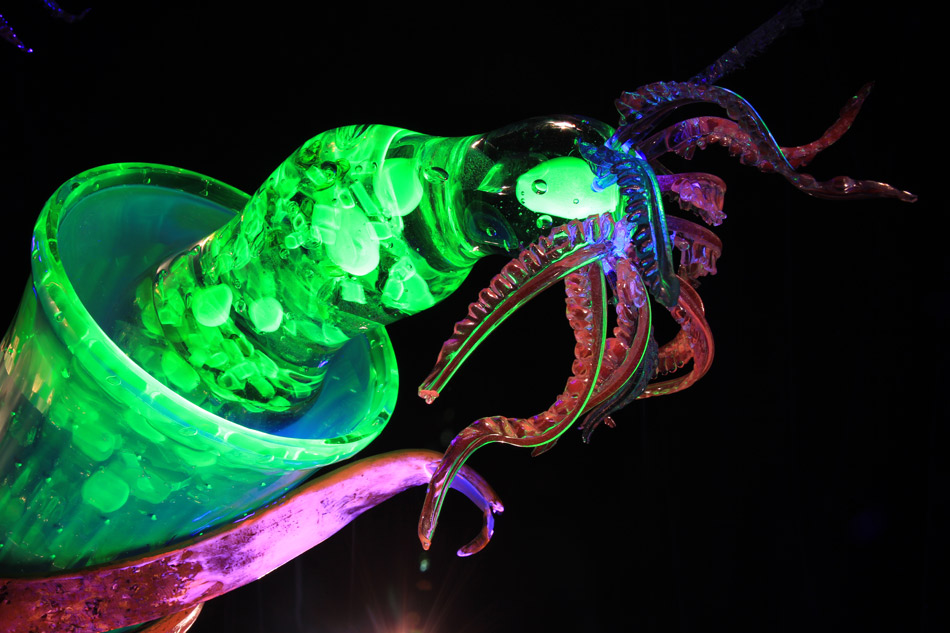 I like it because it glows, but also it’s a metaphor for how toxic our oceans are becoming. I did a big series on microplastics and plankton because when I was looking into the microscope onboard Tara Expeditions in Chile, I wasn’t just seeing plankton, I saw microplastics mixed with the plankton. In all of my work, I try to anthropomorphize or humanize the microscopic so that people can relate to it because I think things so small seem unrelatable, but they actually affect our everyday lives.

Tell us about the Rococo Cocco Reef Project.

We’re just starting to look for spots in the oceans now.  I just made this video. It’s sort of a pitch of the reef.

I want my reef to be totally sustainable and be an example of how you could build and practice this concept of geotherapy. It would also be a great way to build up coastal reef systems that have succumbed to erosion, as it would attenuate waves. We had a preliminary launch last year and I’m working with a woman who works with The United Nations, she’s scoping out sites for us, and we’re building a team of scientific advisors, explorers and fabricators to make it, so it’s very exciting.

Where are you hoping to establish the reef?

What are your micro-portraits of coral on Cape Cod?

They are from a specimen I was really attracted to. Coral is endangered, but these grow like dandelions under the water, in clusters, and they’re considered the least endangered. Some of them have these microscopic symbiotic algae called zooxanthellae, photosynthetic symbiotic algae that live in coral’s soft tissues and some other marine animals, and some of them do not — those just grow and eat plankton. The first sign of bleaching in tropical corals is when the zooxanthellae leave the soft tissue, the corals turn white.

They’re so beautiful as they have a translucency like glass. 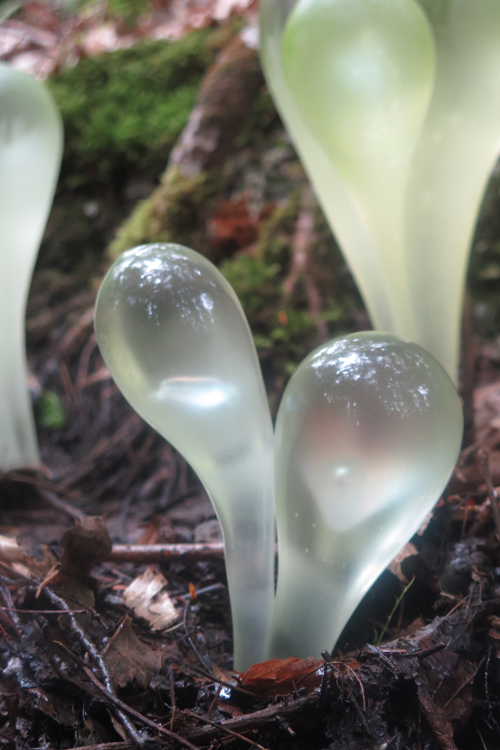 The fine infused glass depicts kami, the spirit in nature in the Shinto religion

The glowing globes in some of your artwork, what do they signify?

My Mom grew up in a Russian Jewish community in post-war Tokyo, a community that doesn’t even exist anymore. She was western-looking but culturally Japanese. There’s this notion of kami in the Japanese Shinto religion that believes all forest creatures and water and rocks are imbued with this spirit life, so that was more of my abstract work. In that it’s not exactly figurative, it’s embodying the forces of nature, so I wanted to enhance nature with these glass objects.  When I was exhibiting in Harlem NY, I wanted people who were just walking in off the streets to visualize nature and see the kami for themselves.

What are you creating with your mom’s belongings?

I was so grief-stricken with my mother’s demise I decided to make some work about her. It’s a personal project but I hope the pieces will be abstract enough to show in an exhibition. I haven’t done this kind of work with microplastics before. She has all these Japanese antiques and kimonos and my grandfather was in the pearl business so I’m going to focus on pearls, which I’m very interested in as they’re also from the ocean.

Which other mediums do you work in?

I love glass, I love bronze, I love photography. I would describe myself as a photographer and a sculptor, but I’m a multimedia sculptor, so I use everything.

I have two main modes of working. One is supposed to be biodegradable and fade into nature, like The Rococo Cocco Reef, and become embedded in nature, and the other is fine art, like lava land, meant to be preserved, almost toxic, made for a museum. 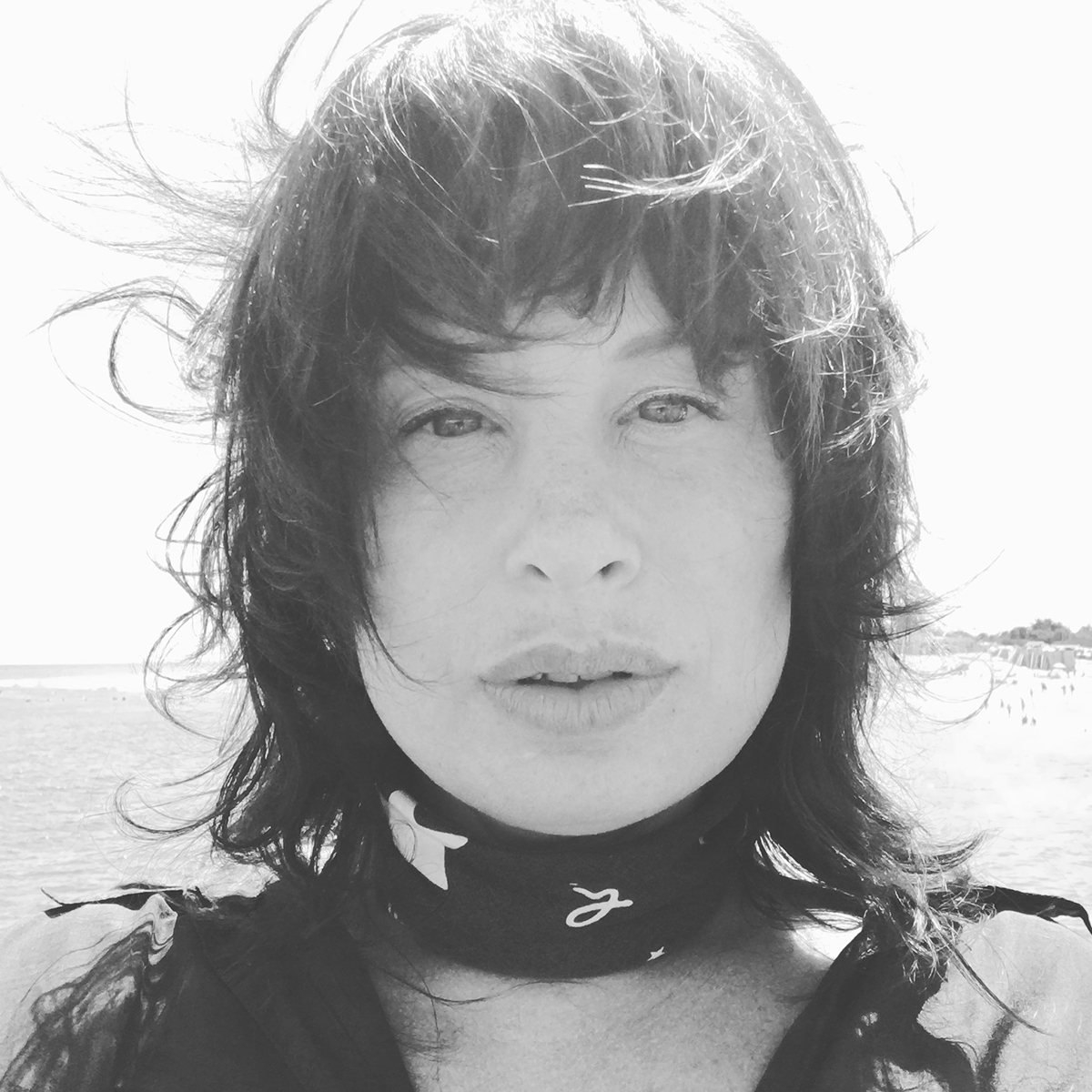 How do you make a living?

I sell my prints and I also do these big sculpture commissions once in a while and I make most of my money from that. I’ve also done a lot of portrait sculpture, which is handmade sculpture, in bronze and glass. And I do 4 or 5-day workshops.

When I first started doing this there wasn’t such a big movement, but there’s a big movement for science in art now that never existed before.

For more on the artist, check out  www.Calamara.com

DUBAI ON THE HUDSON

“Build it and they will come” must have been the assumption behind Hudson Yards in NYC. The question isn’t will they, but why would they?

How the Ziwa Rhino Sanctuary is saving rhinoceroses in Uganda

On a plastic island, the L’île Flottante resort floats in a lagoon, as Côte D’Ivoire leads the way with innovative recycling techniques 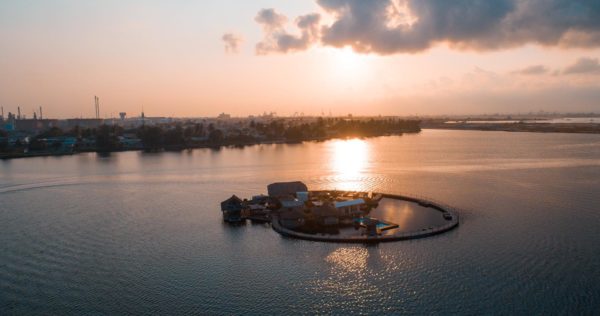