They were one of the few couples on the plane that had dressed for travel. Dressed in the sense that a flight was not a casual occurrence, especially a transatlantic flight. And even in 1995, when the rest of the sojourning world had slung their bodies into Champion-brand leisurewear, gray sweats and thick soled, cushiony sneakers, my parents insisted on fine woolens, my father in church-worthy slacks and a sport coat, white shirt and tie with tie pin, a cap on his head. Wing tips tied and buffed. Despite my pleas, my mother would not arrive in Ireland, our overnight destination, without a modest skirt and stockings, a sweater and fitted jacket, heels on her feet.

“What would they think of us?’ she demanded, the they being no one we had ever met.

While my father had served in the South Pacific during the second World War, as a pair, my parents’ trips centered on the Jersey Shore, even Florida and California remaining a dream. Too busy with the brood of nine and the family doughnut business. Never money for a real adventure. But as a 40th anniversary trip, my siblings and I gave them a trip to Ireland and England, with me as their guide, having visited the former just the year before and somehow memorized a route along the Emerald Isle’s rugged West Coast.

“This is delightful,” my mother pronounced from her coach middle seat, a slim pillow in a paper sheath behind her head and a plaid lap blanket on her shoulder. The gratis sleep mask, toothbrush and toothpaste she placed in her purse, and she spent a fair amount of time reading over the menu with its choice of meals, all conceived with an Irish conceit: wild salmon, Irish stew, Kerry lamb.

“Aer Lingus is the best,” she said, scolding my father for his English blood. Far from an expert, having tried only one other carrier, my mom was still right, for in 1995, international air travel still dignified its customers (rather than the cattle we’ve become) with multi-coursed meals and hotel-style amenities. At our 9 p.m. dinner there were linens on a tray, real china and weight-worthy utensils, starry stemware and as much free alcohol as one liked. My mother found the stewardess’ uniforms lovely, nodding to their stockinged legs and smart heels. 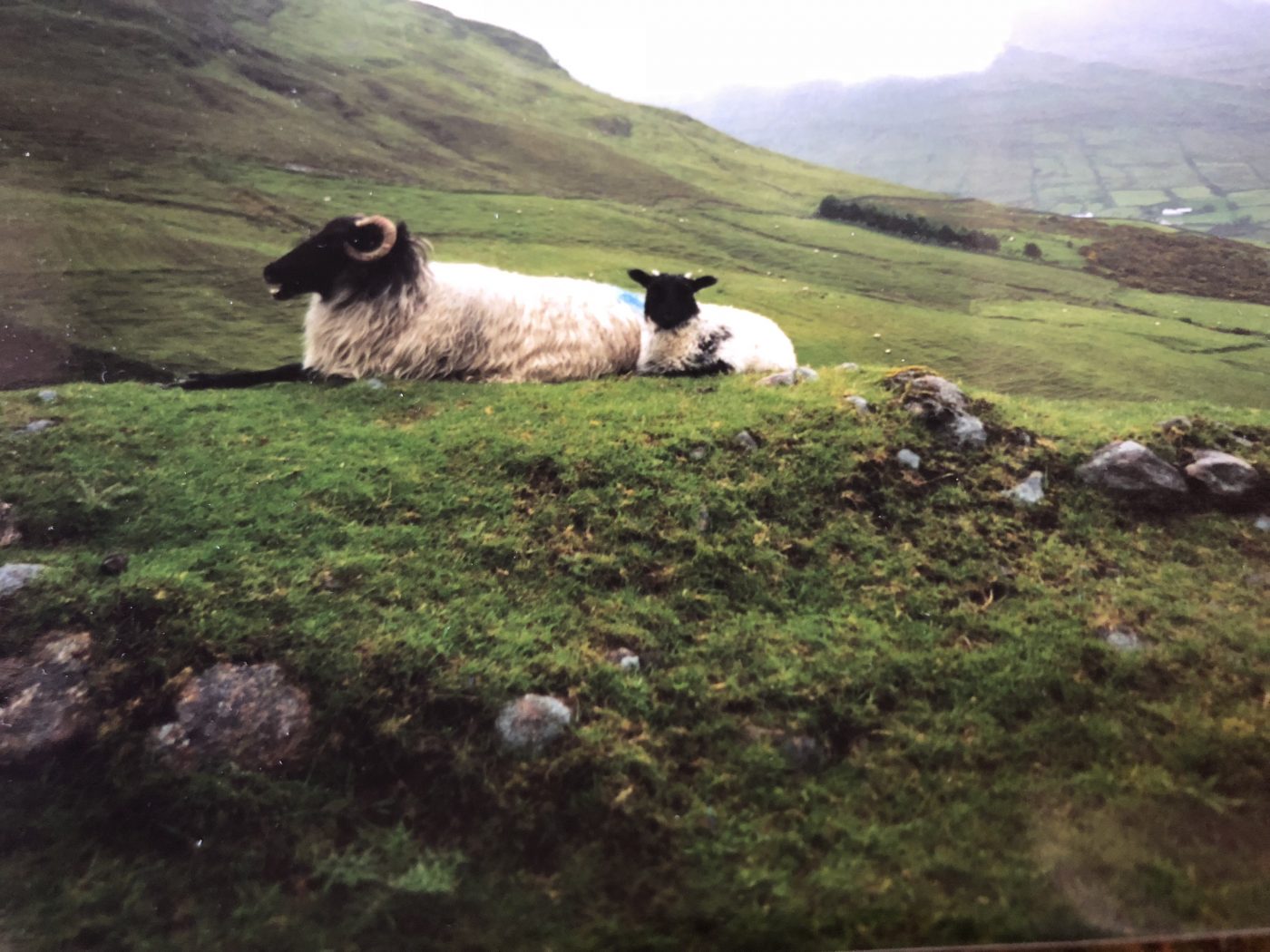 My mother, nee Patricia Ryan, had always been fierce in her love for the Irish. Marrying a man with even half the blood of an Englishman was her personal contribution to world peace. Her untainted Celtic blood was a point of pride she attempted to instill in her children growing up, me the most resistant. For St. Patrick’s Day she whipped green food coloring into the mashed potatoes, stirred it into the milk, baked a white cake with crème de menthe and extra artificial coloring in the batter and icing. There were few occasions when two vegetables were served at our table, St. Patrick’s Day one of those celebrations, where both frozen broccoli and green beans appeared, chosen more for their color than their flavor. For as long as I could remember, on March 17th, my father bought her pistachio ice cream — often which had to be dug out of tubs at the local ice cream store and packed into a cardboard pint, her private stash, one of the few things she did not share.

To me the Irish lived up to every cliché, drunken, clannish, maudlin, and I defended my English surname when at age 7 we moved from the mixed mongrel section of Scranton, Pennsylvania, called “The Hill” to Green Ridge, where, I was cast among the Murphys and Gilbrides and Caseys and Haggertys, the O’Briens and McDonoughs.

“A Protestant last name,” the nuns would taunt, and though my paternal grandfather had converted to Catholicism for his future wife, Jane Dooley, I would fire back that yes, I was part English and furthermore had been named not for St. Patrick but the democratic/socialist Congolese rebel, the black Patrice Lumumba.

But in 1994 a German-Jewish boyfriend convinced me I would adore Ireland with its music, burial mounds, derelict abbeys and raw and rural beauty, its monks’ beehive huts, raggedy cliffs, stone walls and miles upon miles of green. The trip made me fall in love — not with the man, but the country and people, so very different from the Americanized version of Irish I’d grown up with. The Irish were brave in the defense of their land and faith, witty and open-hearted, beyond generous, keen on education and their native Irish language. And while I had attributed my love of intellectualism and propriety to the DNA strands hailing from Warrington, England, I found that my heart beat to the Bodhrán drum. (I have since made the pilgrimage 10 times). 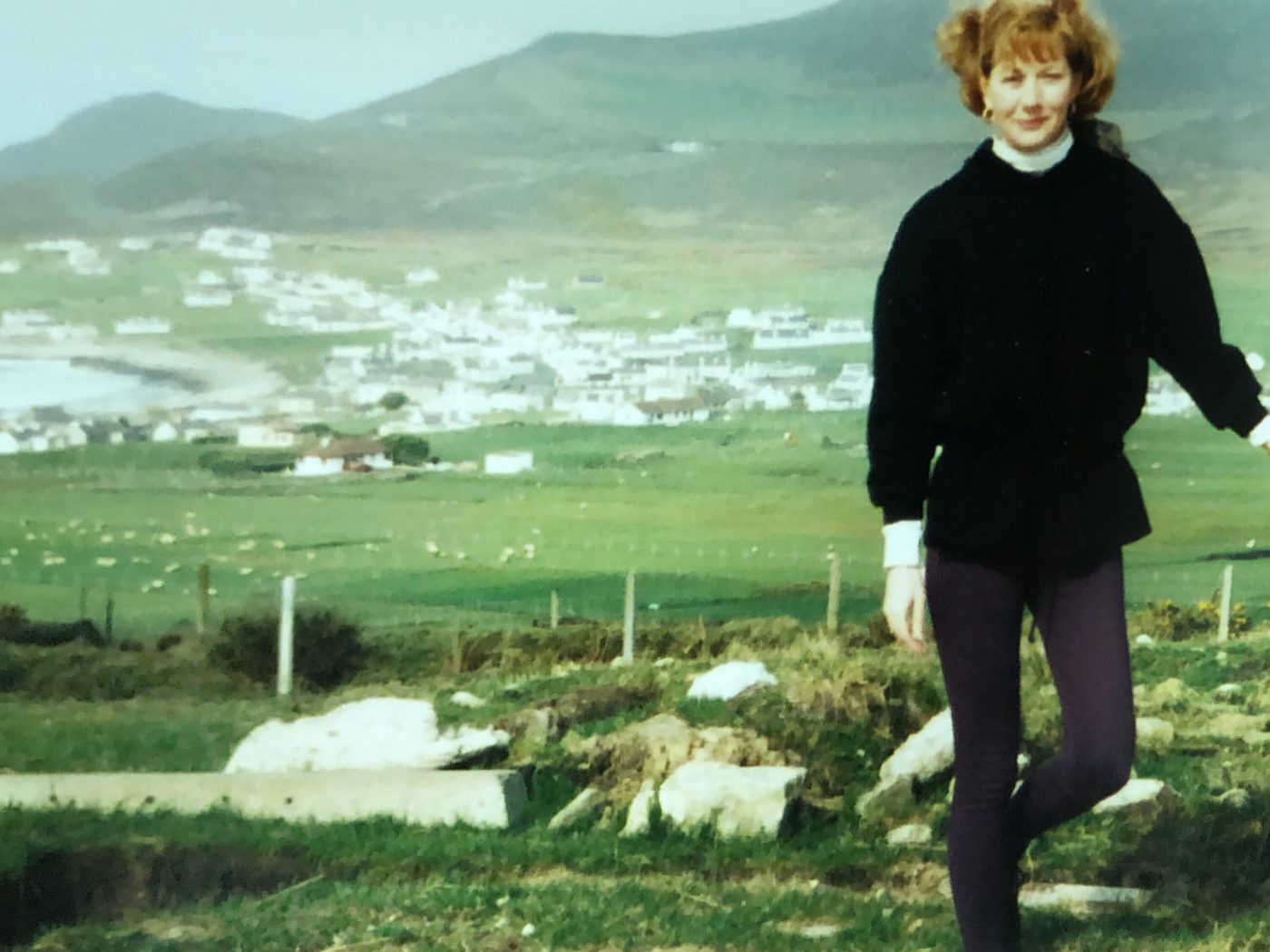 When Irish eyes are smiling….the author in the Motherland

So now the three of us, my parents and their eldest child, passed the quiet night over the Atlantic, the pilot’s brogue at 6 a.m. alerting us that we were due in Shannon in 45 minutes, where we were sure to enjoy a soft morning (Irish for a rainy start) and a smooth landing. Minutes from our approach we broke through the clouds to see mist on the windows, and then the legendary green, hues too numerous to count, unfolding beneath us, welcoming us with a thousand welcomes.

“Do you know why it’s so beautiful?” asked my father who seemed deeply moved at the slice of a view. “Because God is the artist.”

My father left his aisle seat to check his tie and shirt collar in the tiny bathroom mirror. My mother plumped her hair, which had flattened during the journey and reapplied the only cosmetic she ever used, lipstick. I traced the route from Shannon to Lisdoonvarna in my head, planning a quick stop in Ennistymon for breakfast.

At the only bakery we found open at 7 a.m., we bought brown bread and hot crossed buns, tea and coffee.

“Oh yes,” the three of us answered.

Temptation Island: Ireland, on the verge of a culinary renaissance, is now a foodie destination

May the force be with you! You can go to these places, far, far away 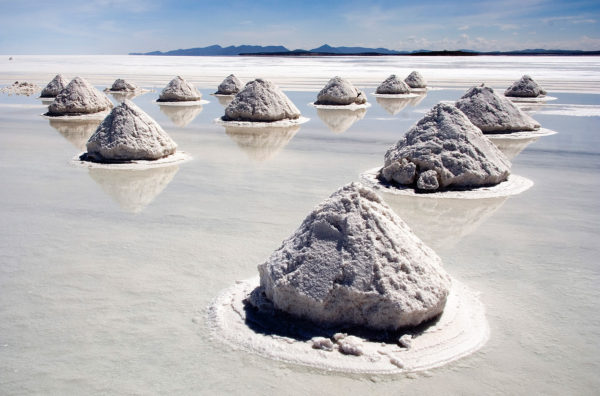