Growing up on a farm in Wisconsin, Christian Schauf was trained as a young kid to always have what he needed with him. He was always prepared. But when you go to the Middle East to entertain the troops, can anything prepare you for being under attack in a combat zone?

For 10 years, Schauf and his band, Catch Penny (he played guitar) visited U.S. military bases throughout the Middle East, traveling in Blackhawks and C-130s. One time during a show at SXSW in Austin, “dudes with very tight haircuts” had approached him and asked if he’d like to play overseas for the troops. The now two-time Armed Forces Entertainer of the Year performed in front of all such dudes, all sober, all the time, which Schauf initially found weird. During that time he celebrated his 30th birthday in one of Saddam Hussein’s bedrooms. 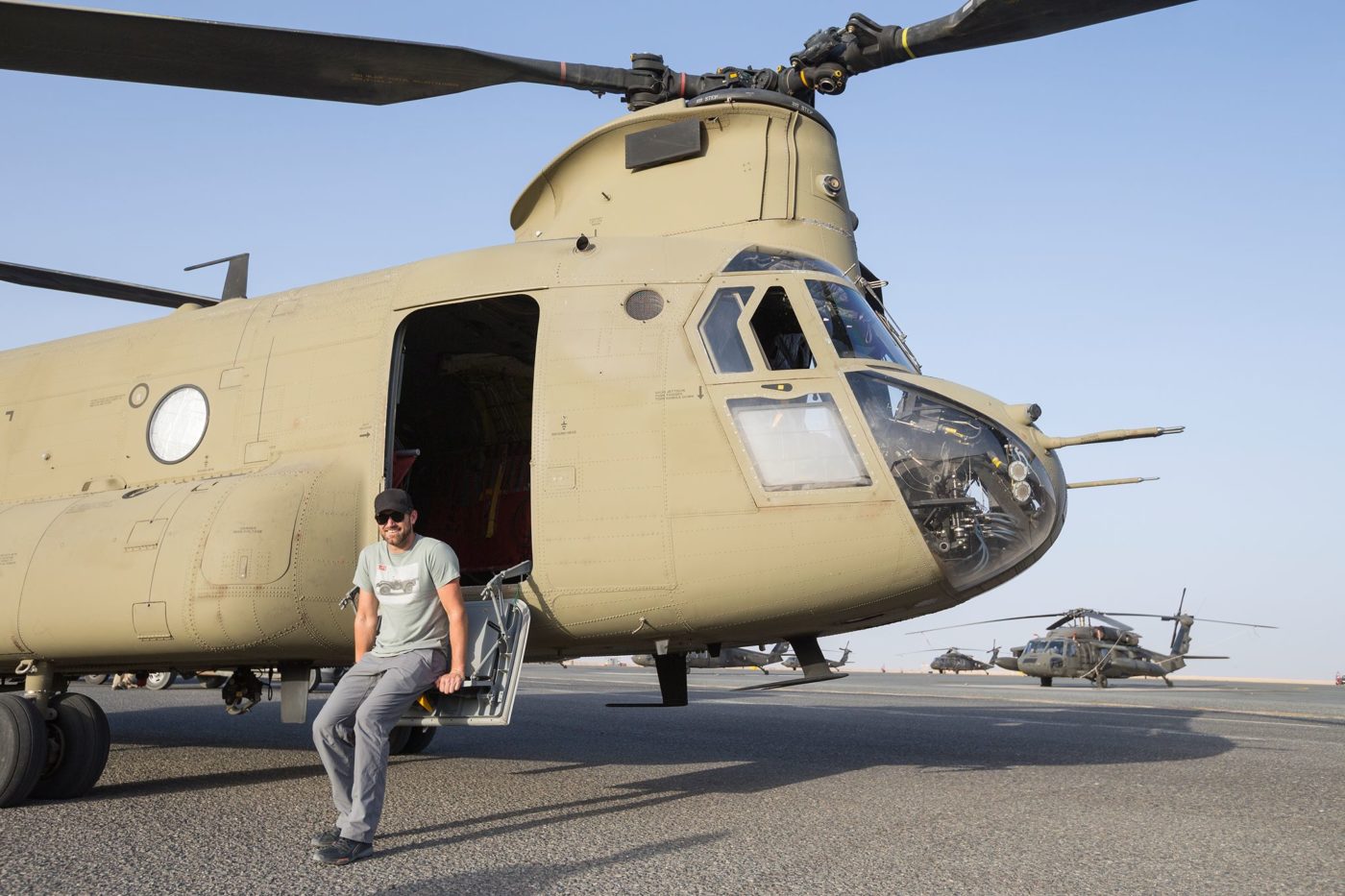 Whatever you do, don’t call “Shotgun”

“Within Camp Victory was a building that was built for Saddam’s daughter’s wedding – it was basically a hotel. We were in this big room where Saddam would stay, had 25 beds in it. Right outside that door were the chairs that Dan Rather sat in when he interviewed Saddam. We had cake and went back to work.”

Schauf is a very serious but extremely adventurous individual. He’s ran marathons on a whim because someone offered him a bib the night before the race. He went scuba diving with Richard Branson and fell off his boat. He hunts. He snowmobiles. He loves coffee.

Now living in Park City, Utah, Schauf, 39, founded Uncharted Supply Co., selling kick-ass emergency preparedness packs. You almost want to get stranded somewhere just to use this survival gear. Schauf wants to empower all types of travelers and fellow adventurers to travel safely and be protected. Just knowing everything will be OK allows you to go even further. 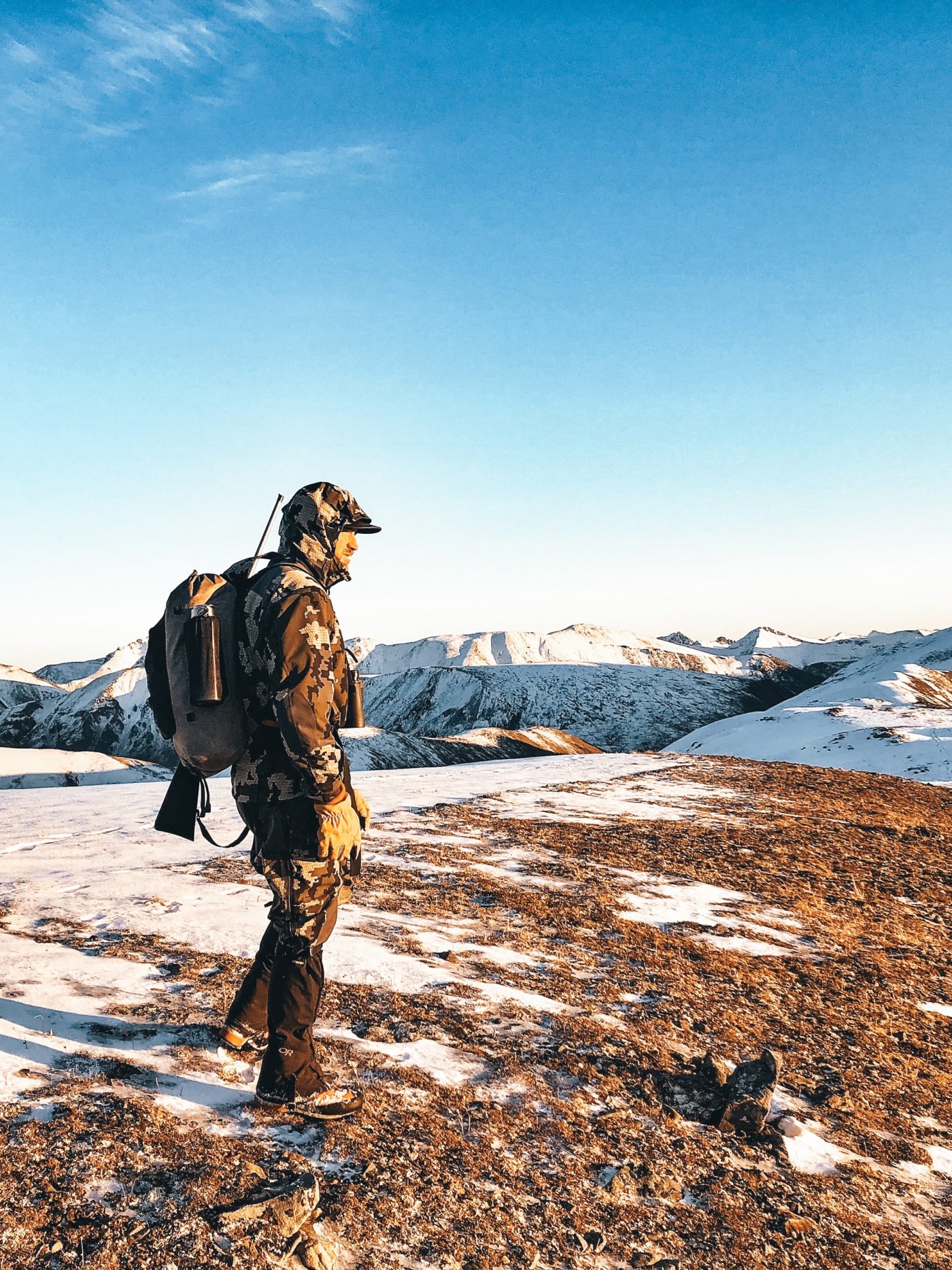 “Wait, did I remember to turn the oven off?” Christian in deep thought out in the wild

Have you had really critical survival situations?

I definitely had instances where I was in a tough situation for a handful of hours, but it depends how you define it. I’ve been stuck on military bases because the base was under attack. I‘ve been stuck because there was a sandstorm and we couldn’t get out. I’ve had snowmobiles break down in the backcountry and had to get out several miles, but to me that’s not pure survival.

What was your most recent adventure?

I just did a moose hunt in the Yukon for 10 days. It was 17 degrees below zero and living in a tiny tent and carrying everything I needed on my back.

I never thought about doing something like this before. To drive up the Alaskan highway and get on a floatplane and fly into the mountains and get dropped off for 10 days and live off your know-how and what you have with you. I love that stuff. The juxtaposition of a moose hunt is the colder it is the more the moose move around. You want it cold but at the same time, sleeping in a tent at 17 degrees below, my puffy coat was frozen when I woke up in the morning.

What was the most challenging part of the hunt?

Honestly, it’s the temperature. You get up in the morning and you’re absolutely freezing. In four days, we walked 137 miles climbing through mountains. When you start moving, you get warm. When you get too warm, you sweat. Then if you sweat the little clothes you do have get wet and you’ll never be able to get warm. One of the hardest things is staying on top of temperature regulation and having food. It’s an amazing experience where everything you’re doing is kind of survival. It’s very fun.

Tell us more about being under attack while visiting military bases.

There were two or three times I thought we were dead. We had to do a combat landing in an airplane. One minute I was sitting watching a movie on my laptop then the next minute I was floating in the back of the plane while they were doing a nosedive to get below where the missiles could hit. That’s a pretty scary situation where all of a sudden you’re doing a freefall and hear explosions. We had one where we were playing a show and then all of a sudden the whole crowd just dives. Everybody goes under tables. Incoming mortar attack. We sprinted into these little bunkers.

One time we were landing and they said we’ve been having sniper fire so when we land we’ll have to evacuate the plane extremely fast, you’re going to run straight ahead to the left; we’ll regroup there. Another time we were taking off on a Blackhawk that took fire. We had to get off so they could go shoot these guys then come back and pick us up. We were taking off in a C130 at a base. On the runway, some guy says put your helmets on, we’re taking on incoming and all I can think of is we’re sitting in a metal tube of jet fuel — what is a helmet going to do? We’re going to be mush.

Being under attack is dangerous. Is there any place in the world that’s too dangerous for you?

I wouldn’t fly over to Iran on a whim right now…. Is there anywhere too dangerous? I think not. If you’re going and there’s a reason and you have a plan and you generally know what’s up, you’ll be safe. But I think sometimes people throw caution to the wind and that’s when people get into trouble. If you’re going over to Afghanistan and drive around in a little truck, odds are you’re going to come in contact with the Taliban at some check point. But if you’re going over there with a group that’s set up and know what to look for, it’s fairly safe. 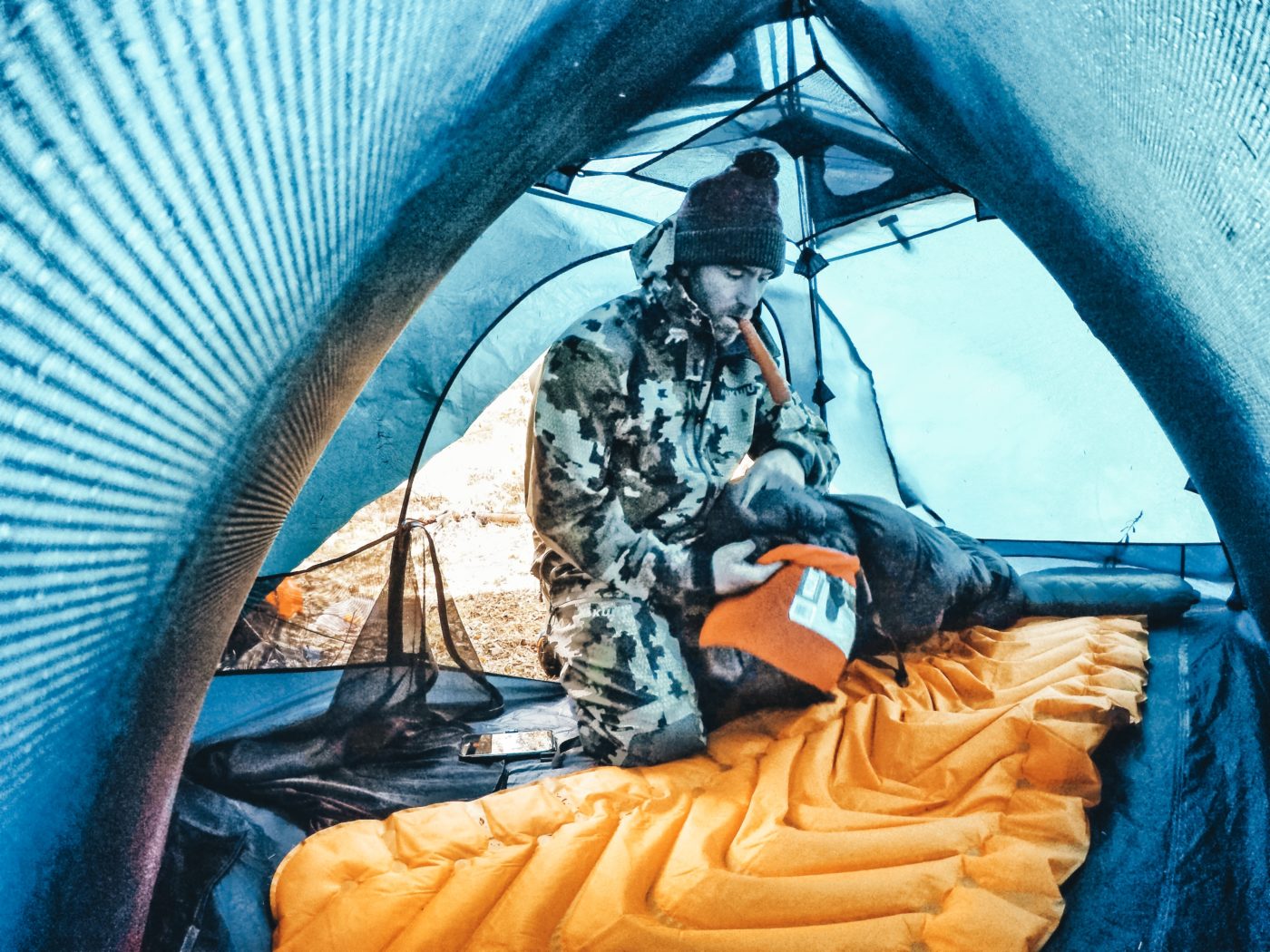 What’s up doc! Christian munching on a carrot in his tent during his moose hunt in Alaska

What type of adventures are you always trying to go after?

For me it always comes down to some kind of challenge. I’d rather do a hunt on foot then riding an ATV or a horse. I think so much of the adventure is learning about yourself and pushing your limits and what you need to improve on. I’ve been hunting with Hadzabe people in Africa, speaking in clicks. I ran with them for half a day as they hunted baboons with poison arrows. I didn’t actually carry a bow or shoot anything. Or just parking my truck at a trailhead and being alone in mountain lion country. I like things that are a personal check to see where I’m at, how good I am.

Is there one piece of gear or tool you always pack? It can’t be from your company.

Growing up in Wisconsin, racing snowmobiles, the joke was always to have a roll of duct tape. Zip-ties and duct tape are essentials, but duct tape is more diverse. I never leave my house without my phone fully charged. Being able to have communication, having a flashlight, being able to photograph spots and have GPS – might as well use the technology that’s out there. 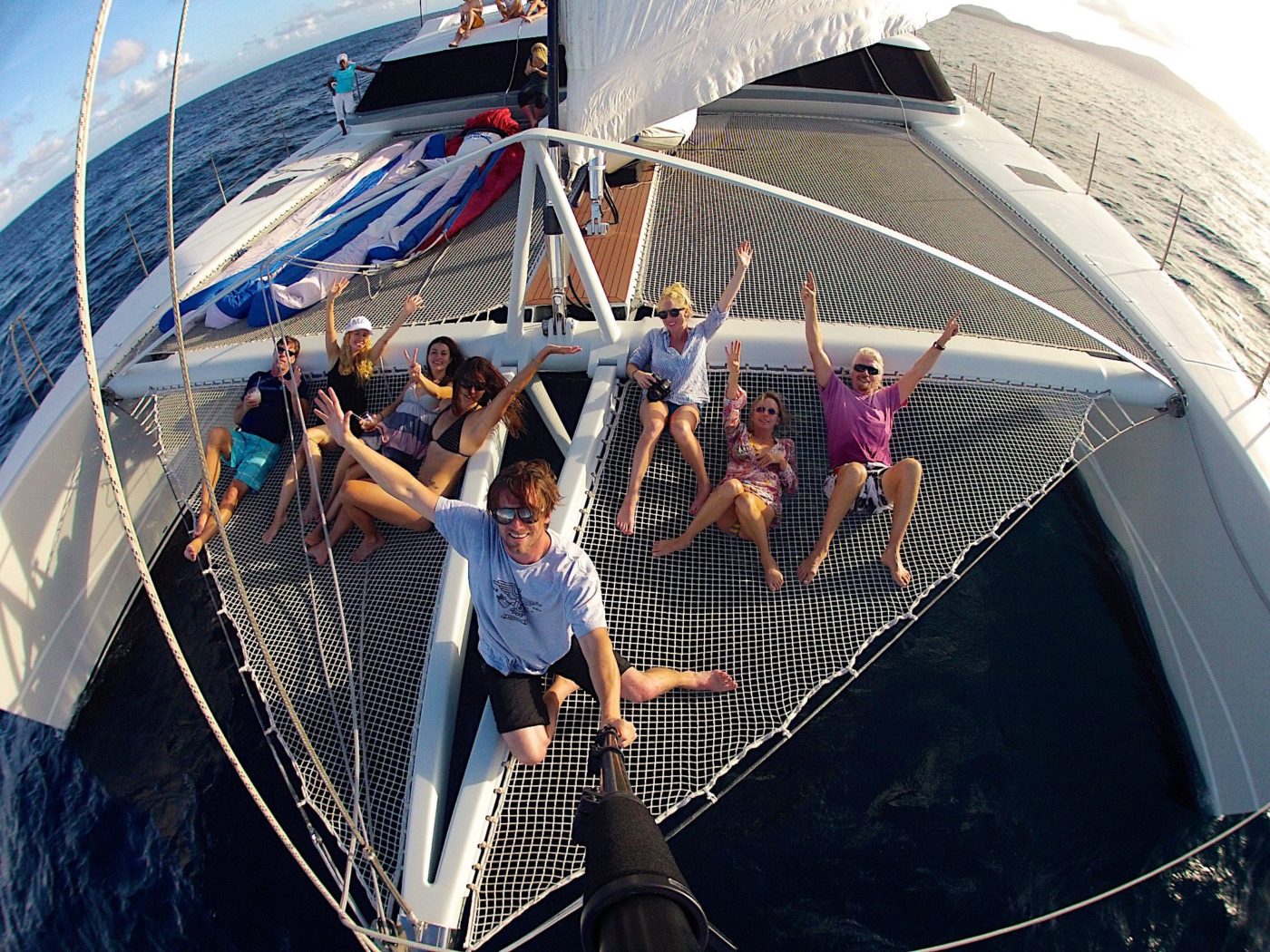 What was it like scuba diving with Richard Branson?

I was in Iraq at the time and my friends rented out all of Necker Island. I got a text saying to get my butt to Necker as fast as you can. That was a crazy trip. It’s a place where you can do whatever you want. It’s a lot of fun for people who can afford it – I can’t. One day we went scuba diving, Richard was active in the water, taking pictures. It was a surreal experience, there’s four of you and Richard’s one of them. One night we get on his catamaran and Richard asked me to help get the cover off the spinnaker. As I’m pulling the cover off, a huge gust of wind came in, the sail snapped and a rope came over the boat at 100 miles an hour and hit me in the chest. I grabbed the rope and it launched me from the boat. The next thing I remember I was 25 feet in the air hanging off the boat. I fell into the water. Richard didn’t want to call the Coast Guard because he was joking around. They threw me a rope and I pulled myself back on board. 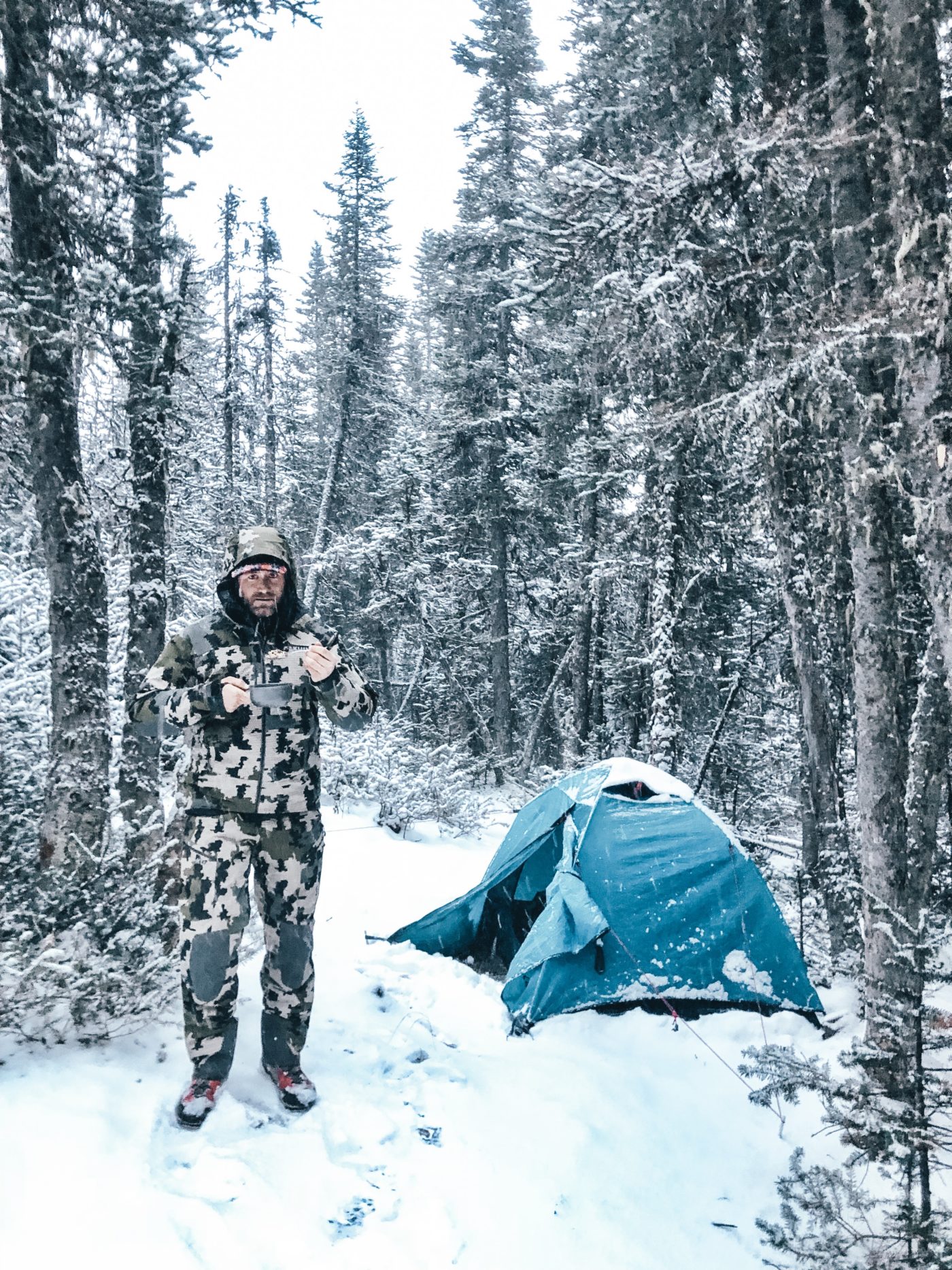 Camouflage at its finest

Where should we go in Park City, Utah?

One of my favorite spots is behind the Montage – one of the fanciest hotels here. Right past it is complete wilderness. The roads aren’t plowed during winter so we’ll take the snowmobiles into the backcountry. You go over this pass and there’s more snow, no people. It’s beautiful. You can go hiking, skiing, I bring my dog. Then go back to the Montage for s’mores, grab a cocktail at the bar, then hit the town – No Name Saloon or The Spur.

If you could time travel, where would you go?

I’d go back to the ‘50s and ‘60s – the era of muscle cars. That’s a cool time! Or when people were first discovering the country, traveling west and coming across buffalo herds and the animals and seeing things people didn’t know about. It would also be fun to go back to when men were men. Like when the first people were climbing Everest wearing leather boots that weren’t insulated. They were tough. It would be amazing to see if a person born today can do it. 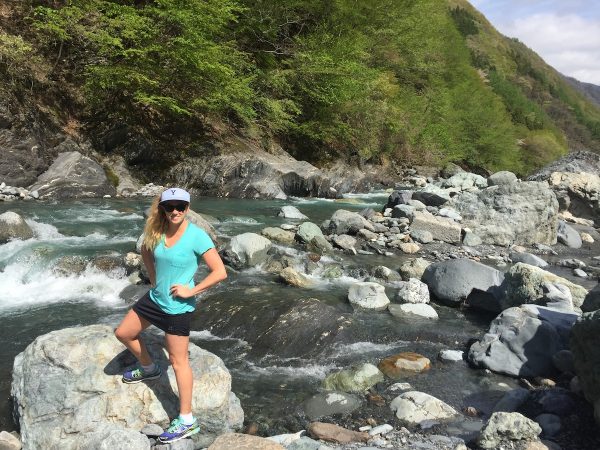 Meg Gill at the hot spring outside the Nishiyama Onsen Keiunkan hotel in Yamanashi, Japan