When it’s blazing hot in summer in the northern hemisphere, escape below the equator when it’s winter to Valle Nevado, the largest ski resort in the southern hemisphere.

Founded in 1988, making it the most modern resort on this list too, Valle Nevado was inspired by Les Arcs in Savoie, France. Just two hours from Santiago, it’s high up in the Andes. And we do mean high. Base is 9,843 feet above sea level and the summit reaches into the clouds at 12,040 feet! You’re so high, you’re above the tree line throughout the 2,656-foot vertical drop. And, with a translation of “valley of snow”, you’re going to get lots and lots of fresh powder, 324 inches a year on average.

What makes Valle Nevado so immense – and magnificent – is it’s connected to two other resorts, El Colorado and La Parva, for a combined 2,224 acres of skiable terrain. You’ll definitely need a Chilean Pisco Sour (sweeter than the Peruvian kind) when you’re done for the day and when the mountain heats up. The après-ski scene is an avalanche of fun. In addition to Chile’s regionally famous cocktail, there’s Chilean wine to sip while soaking in extra-large hot tubs that have volleyball nets.

And because of the swap in seasons, it’s a summer refuge for the world’s best skiers and snowboarders.

Valle Nevado is open from the end of June to end of September, weather permitting.

Hotel Valle Nevado  Considered the most elegant of the three hotel options, the also cozy Valle Nevado, located slopeside, gives all their guests lift tickets, all meals included and even standard rooms have balconies with views of the mountain.

Hotel Tres Puntas  This budget alternative targets young skiers and snowboarders and it’s only a two-minute walk to the lifts.

La Fourchette  The most sophisticated of Valle Nevado’s dining options, La Fourchette serves exquisite Mediterranean and French cuisine, all of which can be paired with Chilean wine. Enjoy a French onion soup or lobster and spider timbale while gazing at the Andes.

Claiming to be the “Greatest Snow on Earth” since 1985, the state of Utah gets pounded with the white stuff to the tune of 550 inches a year! The Beehive State is so serious about its snow, they even trademarked the aforementioned slogan. And since there’s so much of it, along with sunshine (300 days a year of bluebird skies), spring skiing is as common as Alitalia going on strike.

Deer Valley and the namesake Park City Mountain are just 40 minutes from Salt Lake City airport. Both, in fact all of Utah’s resorts, are known for being very friendly to beginners.

Deer Valley is the gold standard in Utah, but only for skiing – they do not allow snowboarding. Don’t even try. We heard their ski patrol hides in the trees wearing white camo. They even limit the number of lift tickets daily to “ensure a quality ski experience.” If you are able to get past the proverbial velvet rope, then you’ll have 21 lifts to ride up and 101 trails to ski down, including one that’s 2.8 miles long, between December and April. And that gold standard is also set for hospitality and amenities making Deer Valley the Danny Meyer of ski resorts. They have complimentary ski storage, ski valets who’ll hold your skis while you find parking or go for lunch, and a Ski With a Champion program that lets you ski (for a handsome fee) with an Olympic skier.

For that 1980s ski bum atmosphere there’s Park City Mountain. They actually have more of everything than Deer Valley: 41 lifts, 348 trails, 17 peaks, 14 terrain parks. They allow snowboarding. They’ve had snow since September. They open a month earlier in November. Have cheaper lift tickets. And at 7,300 acres, they’re the largest ski resort in the continental U.S. Lastly, one of the lifts leads you directly into High West Distillery, the world’s only ski-in, ski-out saloon and distillery. 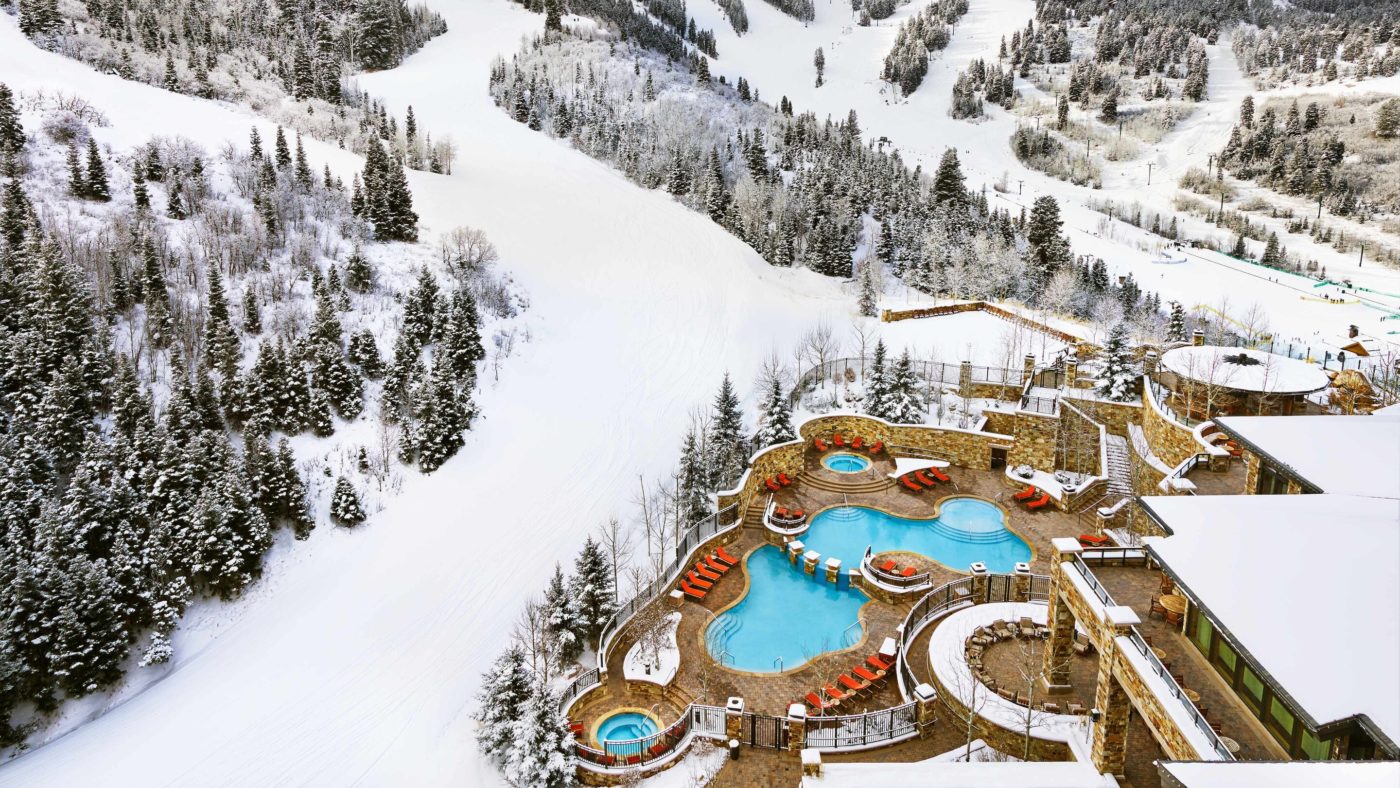 St. Regis  A perennial winner of the Five Diamond rating, this hotel is refinement at its finest. They have 13 different types of rooms, an award-winning restaurant and a funicular that takes you up to the slopes. They even have a turndown service for your dog. Which, let’s face it, you don’t do at home…

Washington School House  This former limestone schoolhouse from 1889 has just 12 rooms, an outdoor pool/spa built into the hillside and après-ski fireside.

Montage Deer Valley  Located 10-15 minutes south of both Deer Valley and Park City resorts, Montage is just a five-minute walk to Main Street. There’s a pub with its own bowling alley and their 35,000-square-foot spa is an alpine oasis that will have every treatment you need to feel relaxed and not sore for tomorrow’s runs.

No Name Saloon  When you have six world-famous bison burgers, you don’t really need a name.

Silver Café  If it can be made from scratch owners Jeff and Lisa Ward will make sure it is at their upscale, yet rustic café. There’s live acoustic music Thursday, Friday and Saturday night.

Viking Yurt  Take a 23-minute sleigh ride up to 8,700 feet for a four-hour, six-course Nordic dinner inside a yurt that’s big enough to house a grand piano. And if you’re wondering how all the food gets up there, the chef brings it up himself by snowmobile.

Finland has no mountains. They have hills, or fells. And lots of them among the country’s 75 ski resorts catering to downhill enthusiasts looking for kid-friendly trails, blacks, snow parks and backcountry. The season goes from mid-October all the way until early May when the snow finally melts. This may be why the atmosphere is very relaxed and not that crowded compared to the more known resorts in Central Europe. The best ones are in Lapland, just 105 miles north of the Arctic Circle. Yeah, it’s pretty cold, like high temps below zero fahrenheit cold.

There are 14 ski resorts in Lapland, of those, the most known are the “Big Four” – Levi, Ylläs, Pyhä-Luosto and Ruka – with Levi being the most popular, the most lively thanks to their bustling village, and also the biggest. At any of the resorts, the hills rise from roughly 1,600 to 2,300 feet above sea level and many of the trails are nearly two miles long.

A visit to Lapland during the nearly 200-day season overlaps with the Northern Lights, or Aurora Borealis. The dazzling display of blue, green, red and violet in the winter sky can be seen as early as 5 p.m. and best between 8 p.m. and 1 a.m.

And since it’s in nearly constant darkness during winter, “night” skiing is practically any time of day.

While you’re in Lapland, get around via reindeer sleigh rides or dogsledding. Other wintertime activities include snowshoeing, snowmobiling, ice driving, ice fishing, ice swimming and outdoor laser tag. 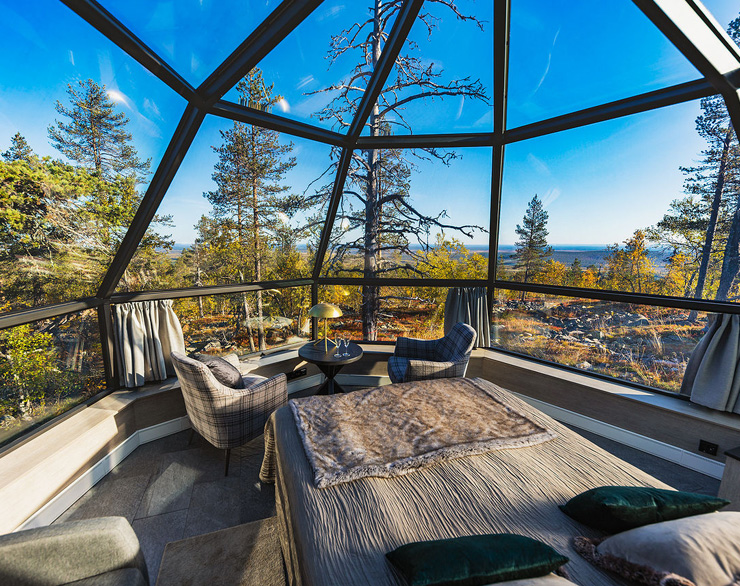 Breaks Sokos Hotel Levi  Finally, a hotel that has hardwood floors! Guests can go dogsledding, even pet a reindeer.

Levin Iglut  Only 15 minutes from the Levi ski resort, these spacious glass igloos put you directly under the Arctic sky for you to witness the spectacular Aurora Borealis. When you’ve had your fill of the Northern Lights, or simply want to leave the cozy and warm igloo, the hotel can arrange outdoor activities from kicksled safaris to reindeer farm visits.

NiliPoro  It’s all about the reindeer — and how often do you hear that — at this 24-seat Finnish restaurant. Owned and operated by a local reindeer herder, all of the ‘deer’ ol’ meat is from his own herd: reindeer burgers, sautéed reindeer, reindeer sausages, reindeer soup. Most dishes are served with lingonberries. They also have a fish of the day.

King Crab House  For many fishes of the day, come here. The salmon, halibut, blue mussels, and, of course, king crab, all come directly from the Arctic Sea. There are so many king crab options – in white wine, chili coconut, spicy broth – and should you go with the classic live king crab, they let you select yours from their aquarium. They’re large enough to feed four as a main course.

When our intrepid staff writer recently went AWOL, turns out she was capturing the last days on the mountain in Aspen…. 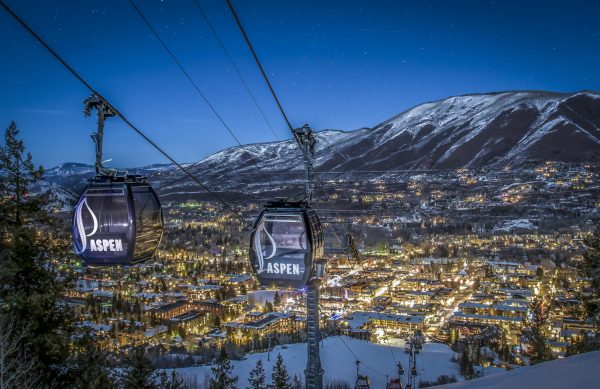