Before creating and bringing public the worldwide behemoth hamburger chain Shake Shack, which reportedly made him worth several hundred million dollars, Danny Meyer made a slow, steady and in many ways unparalleled success as a restaurant owner in New York City, probably the most competitive dining market in America. His first restaurant, after which his now massive food empire is still called, Union Square Cafe, started more than a quarter of a century ago, in what was then one of central Manhattan’s last commercial wastelands, the Flatiron District. He trailblazed the whole area, specifically Union Square, with his excellent restaurant that advanced and inured the farm-to-table approach. The location of the restaurant was decided on, he has said, because it was all he could afford to open his own place.

USC became regarded as one of New York’s top restaurants, more or less until he opened his next place that topped those lists even more regularly, Gramercy Tavern, widely considered one of the best restaurants in the country. He opened new ones on a much slower arc than other celebrated groups, such as the Batali and Bastianich Group, and resisted out-of-town expansion longer, because he wanted to get details right, not take his eye off the ball. He achieved that objective categorically. Liking to keep his business within a small radius of his first spot (and close to where he lived, so he could walk to all of them to say hello to patrons), he continued to open new properties, including Blue Smoke, his superb, uncommonly authentic barbecue place, and the internationally celebrated Eleven Madison Park, which he sold to management in 2011. Other exceptional restaurants include The Modern, uptown at the Museum of Modern Art; Untitled at the Whitney Museum; and Maialino, which we previously featured and where we conducted this interview.

While we were talking, he asked me to excuse him for constantly looking around the restaurant, observing it as if it were a living organism, which to him it most certainly is. A dishwashing machine behind the bar made a slight noise, its door dropping suddenly, unregistrable to me if it hadn’t been for his reaction, and he is suddenly annoyed, and calls someone over who lets the barman know to be more careful. 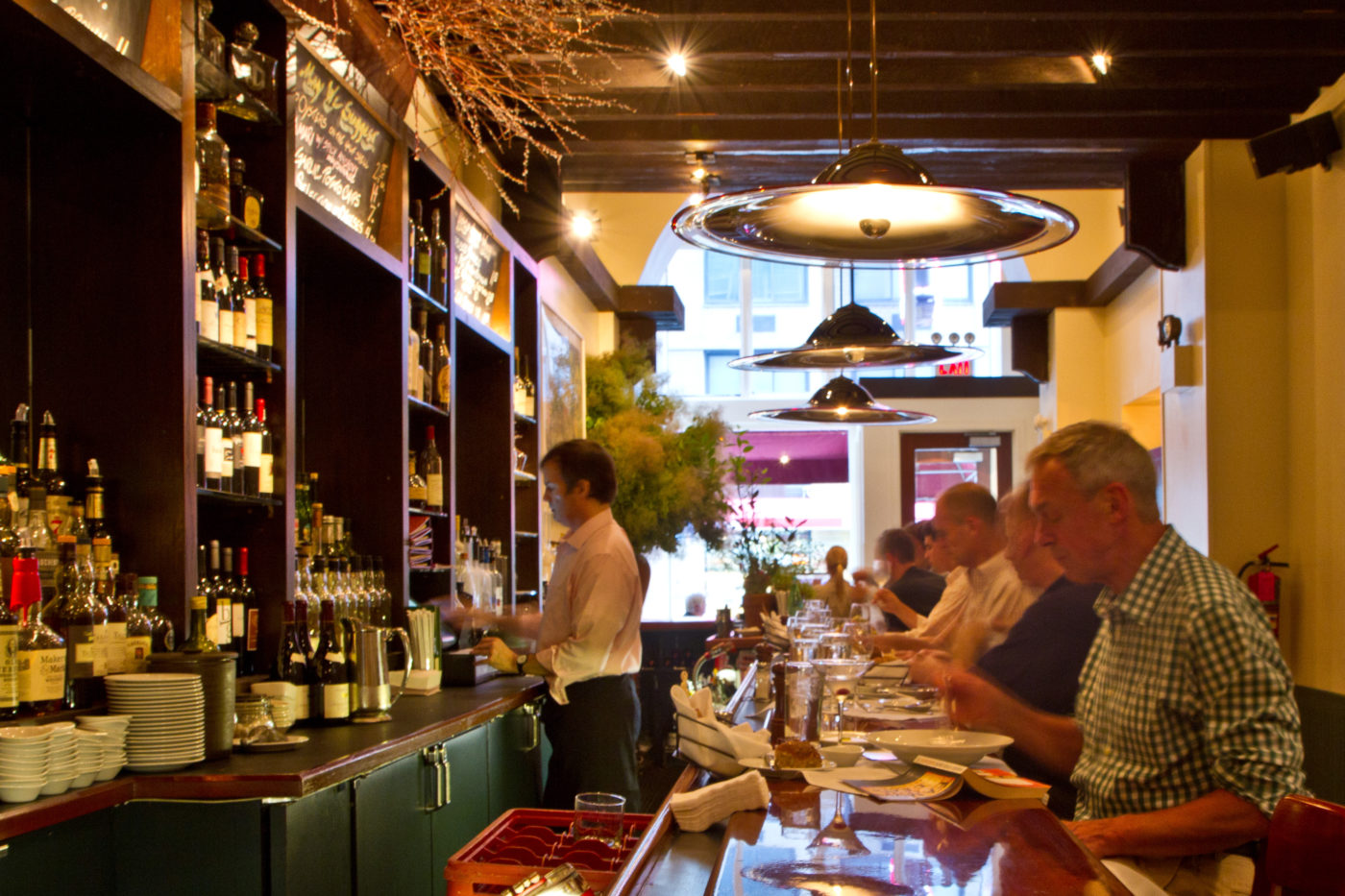 Lunch at the bar, at the original location of the legendary Union Square Cafe***Nathan Rawlinson***

What are you looking for when you watch your staff working?

I’m looking to see if they are having a good time, because the fuel that powers them is making other people happy. They’re looking for opportunities to see if they can do something better.

I heard this in a restaurant about 20 years ago, one of the waiters was complaining to the manager about how nasty all the customers were and the manager said: “You’re right, our life around here would be a hell of a lot easier if the restaurant didn’t have any customers.”

Your restaurants are known for being spectacularly attentive and welcoming. It’s your trademark. Where did that begin?

I was working for my dad as a tour guide in Rome. My job was to give tours to airline employees, that was his special market. According to the program, they were supposed to see these five things and I would always find a way to talk the group into going to my favorite restaurant. Meanwhile the restaurant was giving me a 1000 lire commission for every person I brought. That’s where I was nicknamed “Maialino”  — it means “little pig” in Italian but was also a play on my name, “little Meyer” — because I always ordered the roast suckling pig. At first I thought they were calling me “Maiarino, so I didn’t get it. Somebody had to explain it to me.

The restaurant was called La Taverna Di Giovanni, I got to know the family. Several years later when I wanted to go in the restaurant business, that was my first call, and I said “Can I come cook with you?”

That Roman experience was hugely influential. When I picked up those airline people at the terminal, cranky because they hadn’t slept all night, and loaded their luggage on the bus, took them to the hotel, I thought, I’m going to be with these people for the next five days, so I would intuitively search for the crankiest, most miserable person in that group, and make it my objective to make them the happiest person in the group by the end of the five days. It made me feel better more people having fun. I didn’t lose anyone — the ones that were happy to begin with stayed happy.

Maybe it was because I was the middle child in a household with parents that didn’t get along very well, I learned to figure out where the unhappiness was and find a way to make it better. That’s where it started. 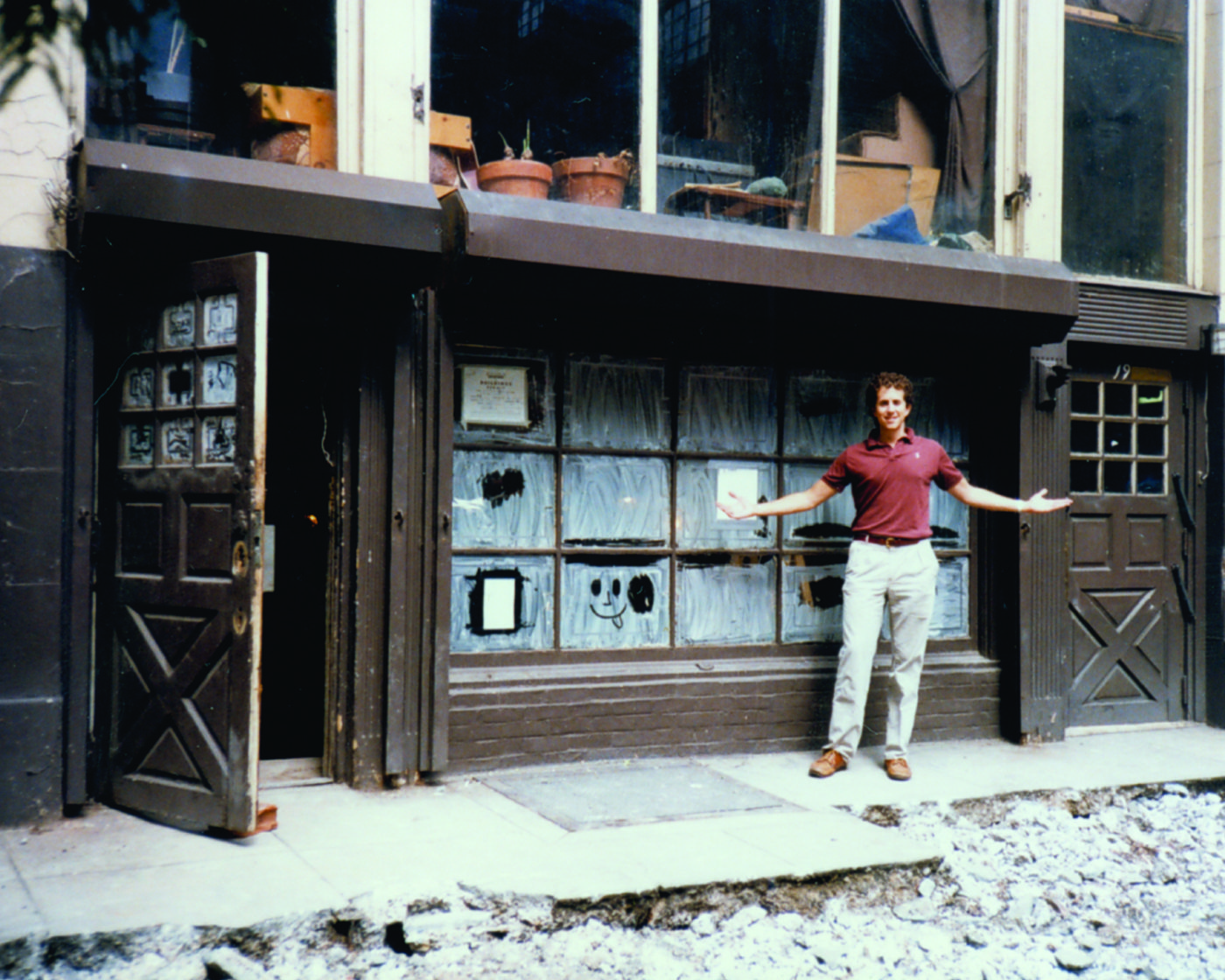 Breaking ground: Danny outside the construction site of original Union Square Cafe in New York, in 1985, when he was 27 and a pioneer in an area no one came to!

What else did your time in Rome inspire?

In a city like New York, where there are so many restaurants, menus much the same, everyone feels like they have to have a gimmick, celebrity chefs have to be in the newspapers. In Rome that’s not the case. There are 11,000 trattorias, there’s probably a menu overlap of about 90 percent, so if you eliminate the variables of how is the menu different, then the competitive advantage goes to two things: What’s on the plate and how do you make me feel? So, intuitively, that spoke to me.

When is a customer out of bounds? For all your desire to make them happy, at what point can’t you?

That’s very simple. There’s no request that’s out of bounds, as long as it does not demean someone who is working or eating in the restaurant. Those are the two lines you’re not allowed to cross.

I really like the challenge of finding what they’re unhappy about and turning it around. But every once in a while I found I could turn myself into a pretzel trying, and they still wouldn’t be happy. The observation I came to, which was so liberating, is that some people are only happy when they are unhappy. That’s not something you can or should change. 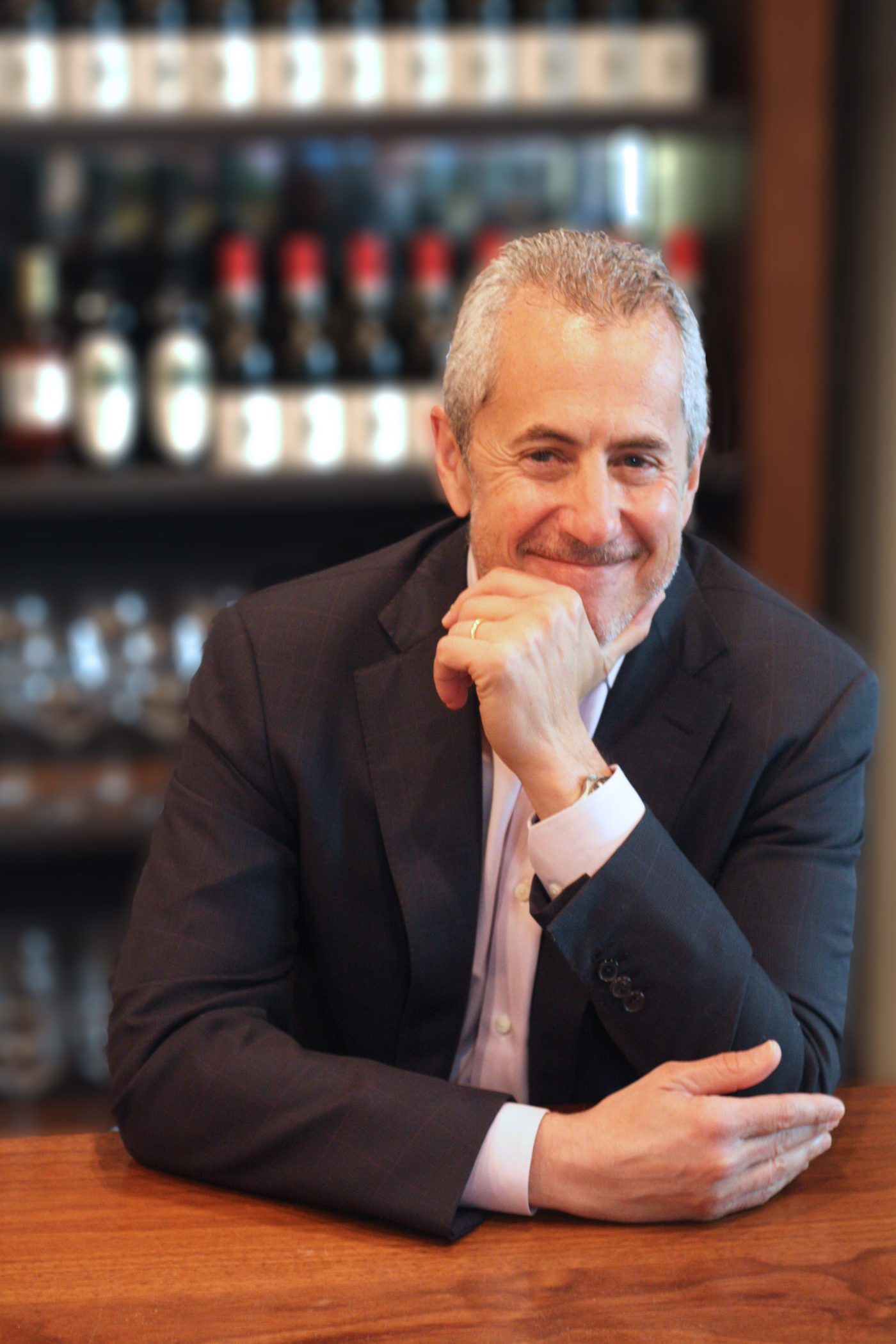 What’s the difference between service and hospitality?

We’ve been brought up to hear the word “service” as the most important driver of customer satisfaction and we’ve been brought up to hear “hospitality” as something you get from your grandmother at Thanksgiving. Service is crucial, it’s a fantastic word to describe technical transaction — did all the things that were supposed to happen, happen? Hospitality means something quite different, which is how did you feel during that technical transaction? Service has nothing to do with how you felt. Bad service will make you feel bad, good service is expected.

My analogy for service is air conditioning. There was a time when you couldn’t get good service. Only a small number of restaurants could get the right food to the right person at the right table, without having to say, “who gets the chicken?” Once restaurants realized you had to figure that stuff out or you’d be out of business, everybody figured that out. Well it’s a lot like air conditioning — I remember a time when stores had a poster in the window with a polar bear, saying ‘Brrrr, come in, it’s cold!’, because not every store had air conditioning. Once everybody had air conditioning, it had to be about something else. Hospitality is the way I make you feel while I’m getting the right food to you.

Why doesn’t every restaurant have a high sense of hospitality? How is it I can walk into a place and not feel welcome?

I don’t know. That would be like me asking you why don’t all editors know how to pick good writers?

Is part of the mission to eradicate cynicism?

I don’t try to eradicate cynicism as much as I try to hire hope. I believe that hope is literally the root of the word hospitality. I hope that my actions can actually make someone else feel better. The cynic is someone who basically says ‘It doesn’t matter what we do around here, it’s going to suck anyway.’ And that does not work, at all. One of the emotional skills we look for in the Hospitality Quotient [Meyer’s philosophy for a  service-based industry and the name of a separate company he launched to teach it] of a person we hire is hope. You cannot pull a team in an uplifting direction when anchored by cynicism.

Another emotional skill we look for is curiosity, in other words, someone who does not look at themselves as the finished product. Someone who sees everything as an opportunity to do something better. 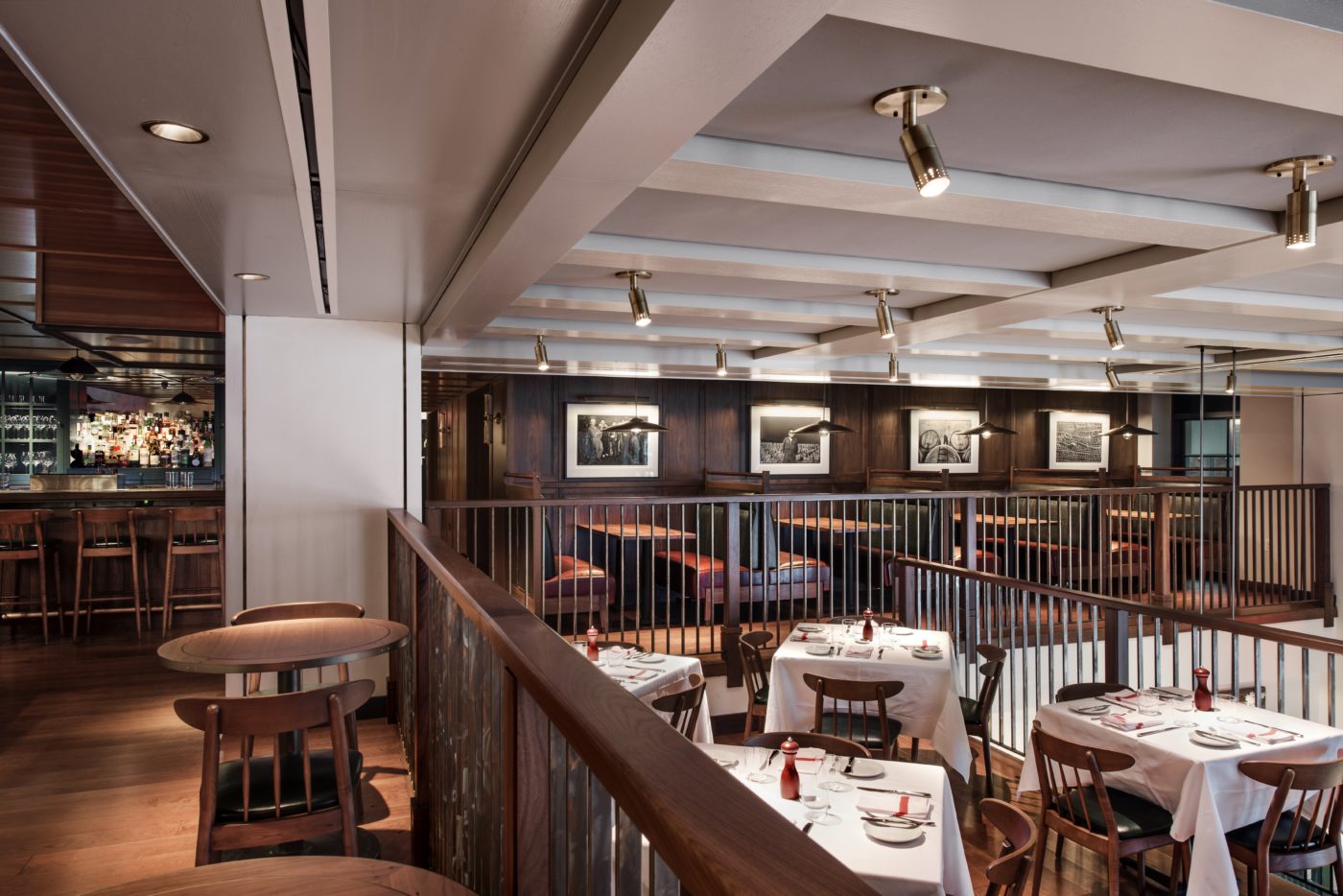 Is humility one of the emotional skills you look for?

I don’t name that as one of the six emotional skills, because I was told I can’t have seven [laughs]. But I have said, and believe, hospitality is humility. Because I’m going to be happy if I make you feel better. An act of arrogance is the opposite.

How important is perfectionism to you?

Irrelevant, and it’s impossible. It’s a stupid, unfulfilling pursuit. I’m much more excited about the journey of excellence, which is a combination of honoring your work yesterday, flawed as it was, and having the humility to figure out how to do it a little bit better today. And if you do those two things in concert, you will get a little better every day. 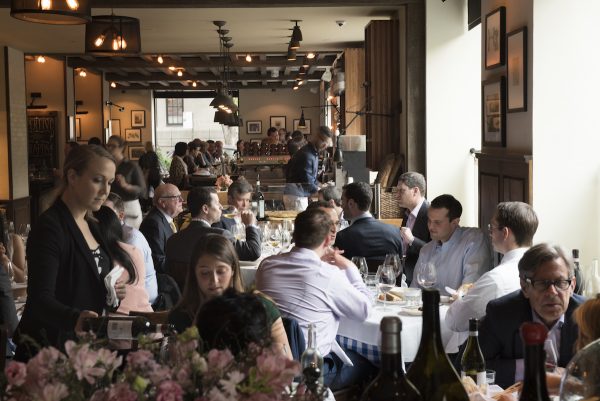