Dressed in colorful Pucci designer ensembles, the Braniff hostess was glamorous, liberated, yet sexually unavailable (not that fellows didn’t make passes), positioning her as the perfect dream girl of the skies. Those were the days — in the 1960s — when people got dressed up to fly and ashtrays on the end of arm rests were not design elements, but a place to rest the cigarettes that people smoked on planes.

Braniff Airline recruitment ads were aimed at women who “wanted the world.” And Pam Brown wanted out of town, specifically Grand Junction, Colorado, where her father owned the local Ford car dealership. Pam responded to the ad and Braniff mailed her a ticket to fly to Dallas for an interview. It was 1964 and she was hired on the spot.

It was the brilliant advertising executive Mary Wells who shook up the “Mad Men” world of the day and masterminded the primly provocative Braniff Airline’s commercial that featured a smiling air hostess who strip-teased off layers of her Pucci uniform. Pam recalls her years as a Braniff hostess and says “it was the best time of my life.” 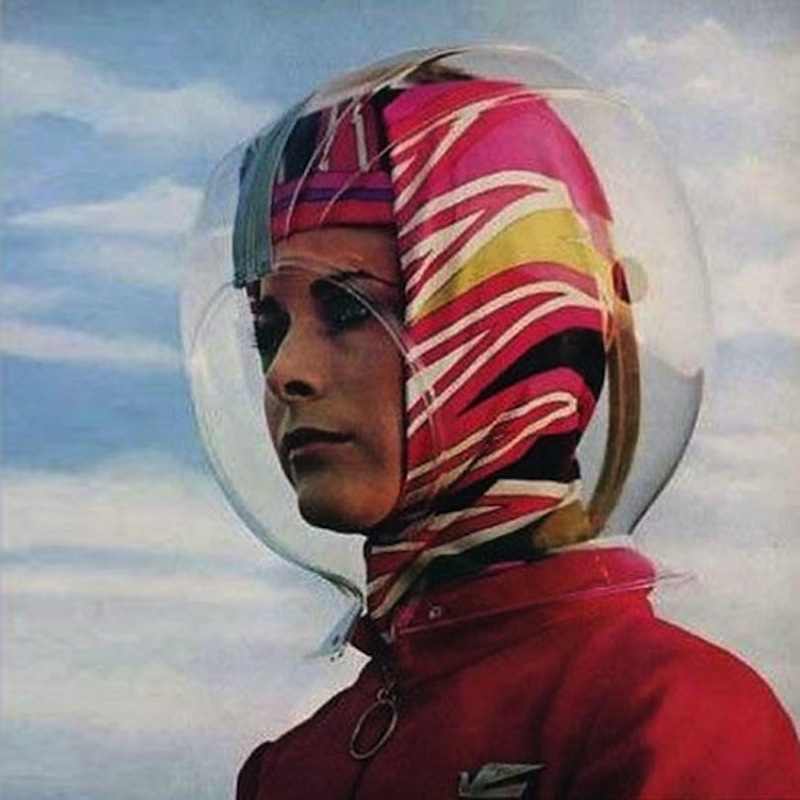 Why did you want to be a Braniff hostess?

I started working for my father when I was fifteen and all during high school and summers off, with the idea that when I graduated, and I majored in business, I’d be in the dealership and take over when he retired. He didn’t think it was an appropriate profession for his daughter, and I decided I couldn’t wait to leave and just wanted to do anything but take a typical job; I wasn’t ready to get married, have two kids and live in a house with a white picket fence.

We were called hostesses because we were told the plane was our home and the passengers were our guests. We were supposed to treat them like it was our home.

Best experience as a Braniff hostess?

When I met Eddie Arnold, the famous western singer. He was on my flight and he was so outgoing and stayed on after most of the people deplaned and we took pictures together. The other was Zsa Zsa Gabor. She was a little on the quiet side and arrived wearing a full-length blonde mink coat. Women really dressed up when they flew. Usually they’d wear a full-length or short fur jacket in the winter.

I normally worked in first class. Drunk passenger throwing objects at me was the worst. I had a passenger who got on the plane and when he lit his cigarette before takeoff and I told him to put it out, he threw it and tried to hit the front of my blouse. Then he did it again. He refused to stop, so I had to call the captain and he was removed from the fight. One drunk passenger called me over and asked if we could polish his shoes. I said, “I’m so sorry but we just don’t carry any shoe polish on the flight.” I never had passengers who got out of line the way they do now. 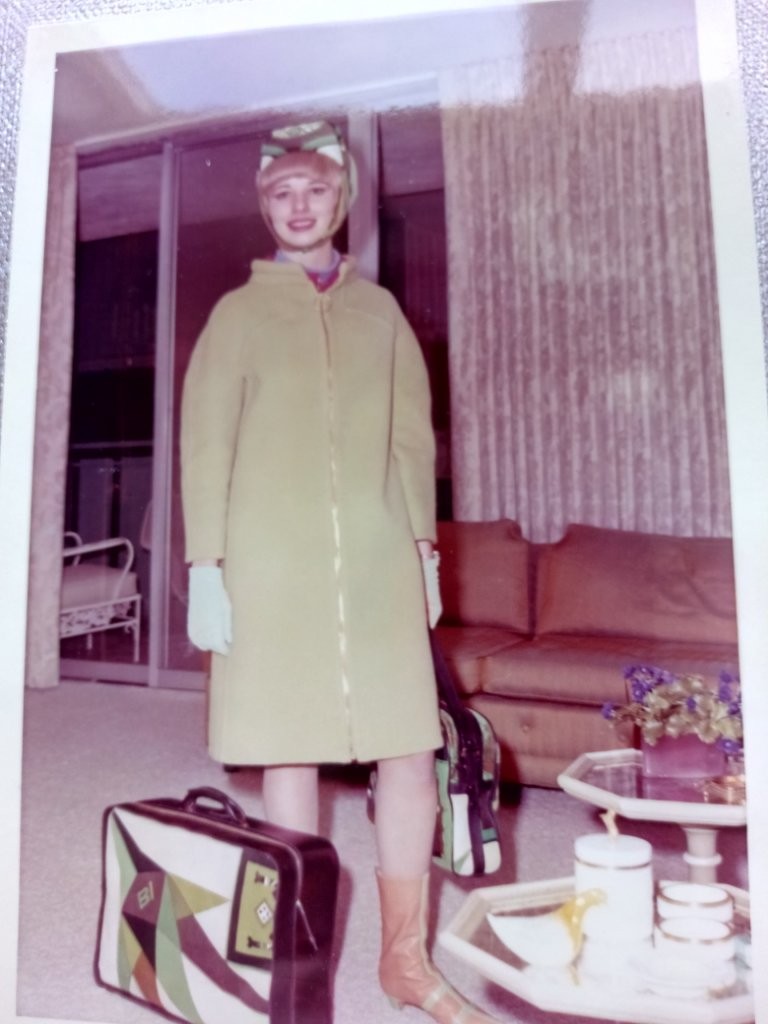 Back in the day, Pam Brown gets ready for work

Always in your suitcase?

Pantyhose, tape, gum. The reason for the pantyhose was there was smoking on all the flights and the people who sat on the aisles would dangle their cigarettes and burn your hose. Tape in case the hem came out of your skirt. And gum because we gave it to little kids so they wouldn’t get earaches on takeoff and landing. We also told the mothers with babies to be sure to have a bottle for take off and landing to protect the babies’ ears due to the change in cabin pressure.

Denver. Because I never got to go home very much and I always worked on holidays the first year. So I’d fly to Denver and my family would come over and we’d get to celebrate the holidays together.

Did pilots and hostesses date?

Sometimes the whole crew would go out together or we’d go out in groups. I only knew about one couple that had flown the same route for years and that’s where they always met and were together every night when they were flying. The men were all married. There were very few unmarried men — if so, it was normally the engineer who was the youngest and newly hired. The married guys were very faithful family men. The wives trusted their husbands and the gals didn’t try to hit on the men. When I flew it was with an outstanding group of professional men and women.

Did a hostess ever meet her husband on the job?

No, not that I ever heard of.

Magic Time Machine in Dallas for dinner and disco. It was a fine dining restaurant with a disco on the second floor. I just liked it because it was happy and each room was decorated in a different theme. One room was decorated as though you were sitting in a shower. The walls had white tiles and there were shower heads. There was a room made out of a school bus, a Hawaiian room, an Alice in Wonderland room, and the servers were all dressed in appropriate costumes. It was really a blast.

Did you ever feel objectified?

Never. I worked there for a year in my charcoal grey suit before they came out with the Braniff strip-deal which we all thought was fun. Our only concern was how are we going to have time to make this many uniform changes on the flight, and we were supposed to change three times. We never ever thought of it as being exploited. We’d take something off and it made the passengers happy. Even the women. They liked to see what we were going to wear. It would never go over today.

Back then the whole plane was happy. All the planes were done by Pucci, bright on the outside and the inside fabrics were beautiful. We had cool planes and hot planes — blue, purple navy or orange yellow, pink. Our working uniform was a raspberry-colored suit with a big gold zipper down the front and we wore raspberry pumps. Under that we wore a jersey top in periwinkle and the bottom looked like a short skirt but flared out like harem pants. After we served the cocktails, we put our raspberry and turquoise dresses on and then we put on our suits before we landed. We had jump seats by the door and put the pieces on our seats.

Everybody had false eyelashes. That was part of the uniform. They sent us for makeovers to top hairdressers and they changed our hair color and style. I was a brunette and the hairdresser gave me a blonde pixie cut. I was thrilled and kept it that way for a long time. 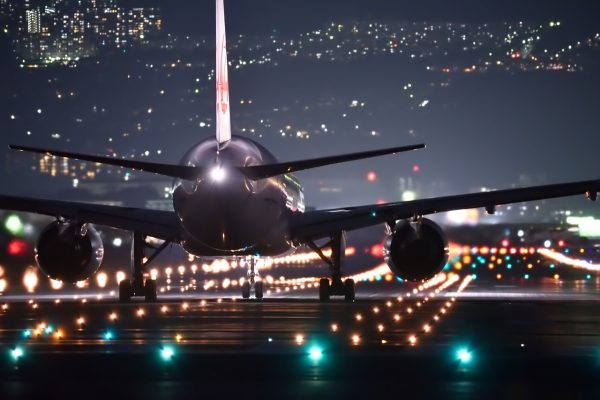