Lunch Time. The most glorious grade school time of day, just behind Recess. At Lakeside School in Braintree, Massachusetts we’d pile into the gym/auditorium/cafeteria, where the elongated picnic tables magically folded into wall panels when not in use. Even if you weren’t buying lunch you still got in the lunch line to view the daily offerings, of which there was one and only one per day: English Muffin pizza, made with a slice of tomato and a half-melted slab of American cheese, a hockey puck-like hamburger, American Chop Suey, or some sacrificial, fried white meat. At the end of the line you collected a small rubbery carton of warm whole milk, and no one really complained. You ate what you got.

So we brought our own lunch, mostly. No one knew what whole wheat, oatmeal bread and the exotic multi-grain was back then. It was Wonder Bread or nothing. Some moms curated crazy lunch meats like roast beef and salami, but for my crowd there was one overwhelming choice: the most delicious and authentically New England sandwich of them all (cue musical horns!) the Fluffernutter! Top it off with a Twinkie, Ding Dong or Hostess Cupcake and you have a tasty breeding ground for sugar imbalance and about a dozen pre-diseases, and also a delicious lunch. 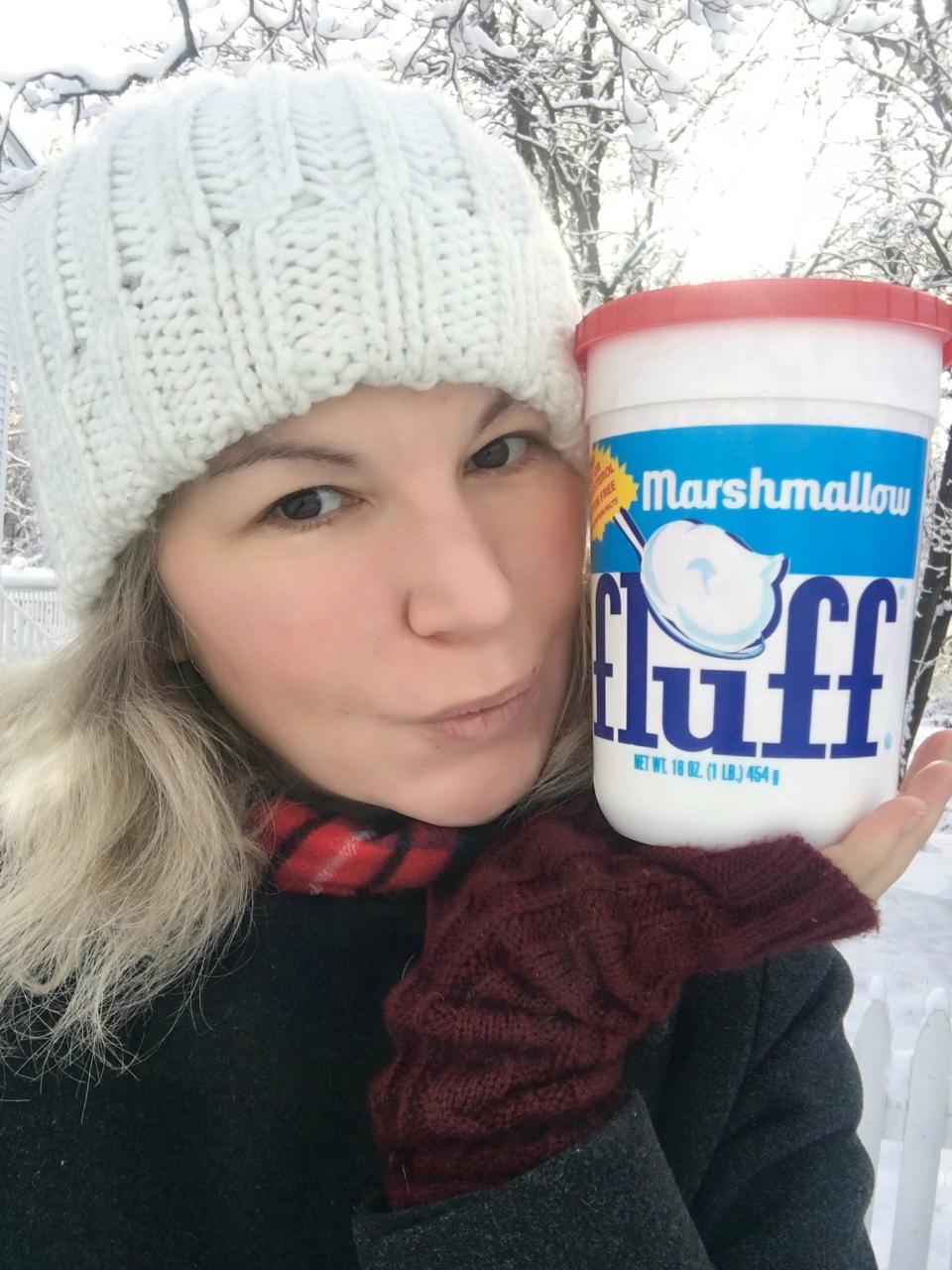 Kiss the Fluff! The author relives her youth….

For those sorry souls who lived a childhood without Fluffernutter sandwiches (otherwise known as “peanut butter and fluff” or just “a fluff sandwich” to seasoned vets), they are the requisite Wonder Bread with peanut butter and Marshmallow Fluff, also known as whipped marshmallow creme, combining forces for a Battlestar Galactica of unearthly delights. But before you could enjoy it, you had to achieve making it, which, for some like me, was the Spartan Race of school lunches. Fluff was to be scooped out of its trademark plastic tub by knife or by large spoon–smearing the gooey white paste all over the sides of your hand and wrist, where it would stay until you could chew it off–then carefully spread over the bread.

But Fluff, first made a hundred years ago in Somerville, Massachusetts, wasn’t built to spread over anything, more likely to patch punctured tires or grout stone walls. But that didn’t stop us. Some moms had the skills required, but kids came towards that Wonder Bread with reckless abandon, smearing and, thus, mangling the bread through the middle, often leaving nothing but an outline of crust. Didn’t matter. We’d smack those two sides together triumphantly before wrapping it in tin foil, and tossing it into a brown paper bag, which were sometimes recycled for days, not because we were “aware”, but out of necessity.

You might think, now as a grown up, I would reflect upon my mother’s choice for Fluff sandwiches as a daily nutritional offering horrifying, but not so. In spite of everyone’s fairly recent discovery of high fructose corn syrup, we were active kids who ran around until dragged inside, even in the harshest of New England winters. If Generation X has gone on to be a “lost generation” it wasn’t because of our lunches at Lakeside, where, when we opened our lunch to find a mutilated Fluff sandwich, we were euphorically “found”.