“Let it snow”, “pray for snow”, “More snow” — just a few of the mottos used at ski resorts in the USA, and probably throughout the world (except in the appropriate language), especially at this time of year with the ski season about to kick off.  And so, it will be in Alta, a historic, laid-back town in Utah whose history dates back to the silver rush days of the 1800s. A new luxury ski resort, the Snowpine Lodge will open in January 2019, set to coincide with the opening of a new ski lift adjacent to the property, called the Snowpine Ski Lift, so as not to confuse anyone.

The new hotel has been resurrected on the site of the original Snowpine Lodge, once the oldest building in Little Cottonwood Canyon. The new accommodations include 58 rooms and suites, and 19 dorm-style bunk rooms, which of course are ski in ski out, meaning no driving, parking and carrying your kit, which veteran skiers and snowboarders know is invaluable. That stuff is heavy. The resort also offers heli-skiing, snowshoeing and cross-country skiing. 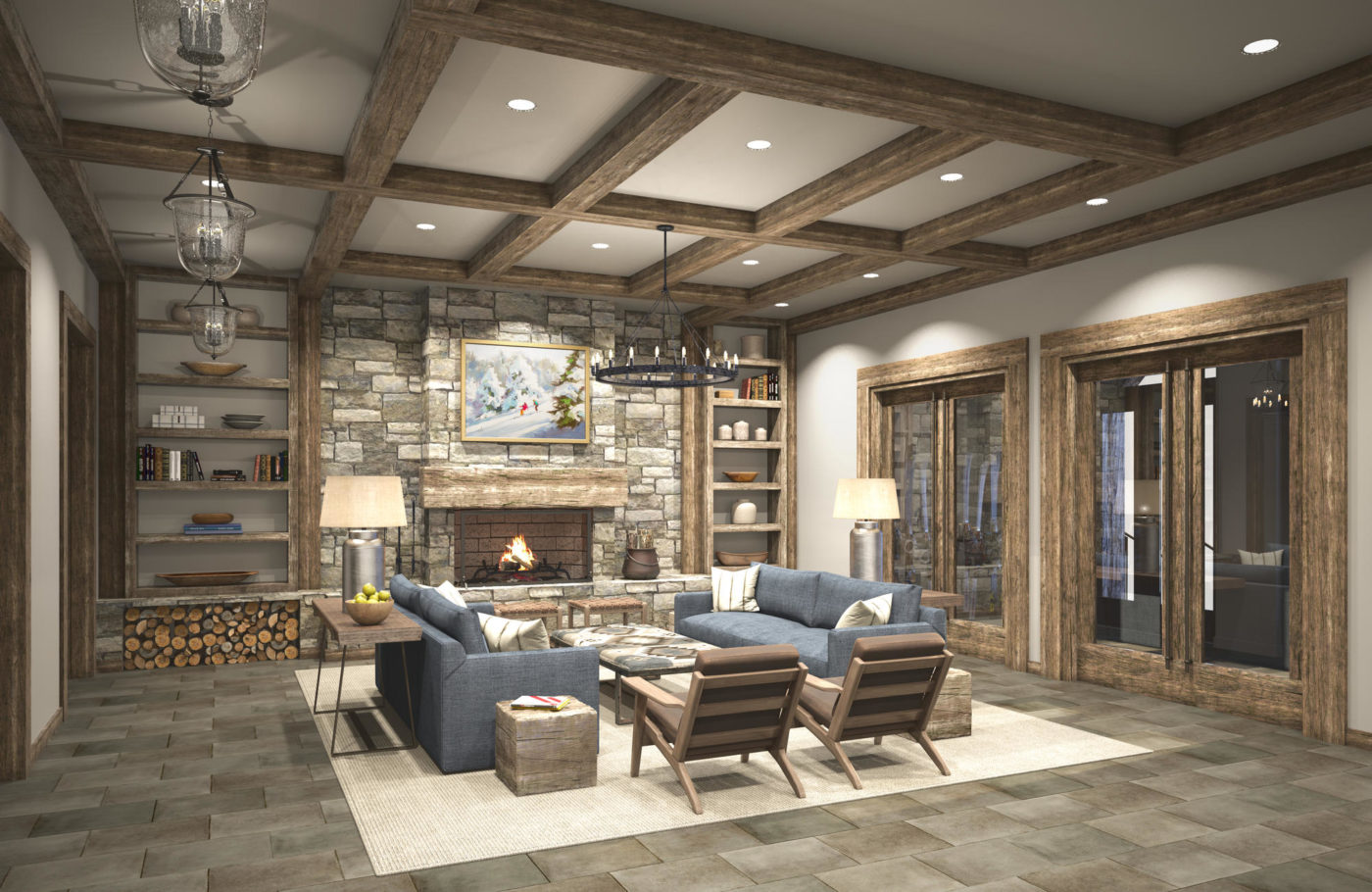 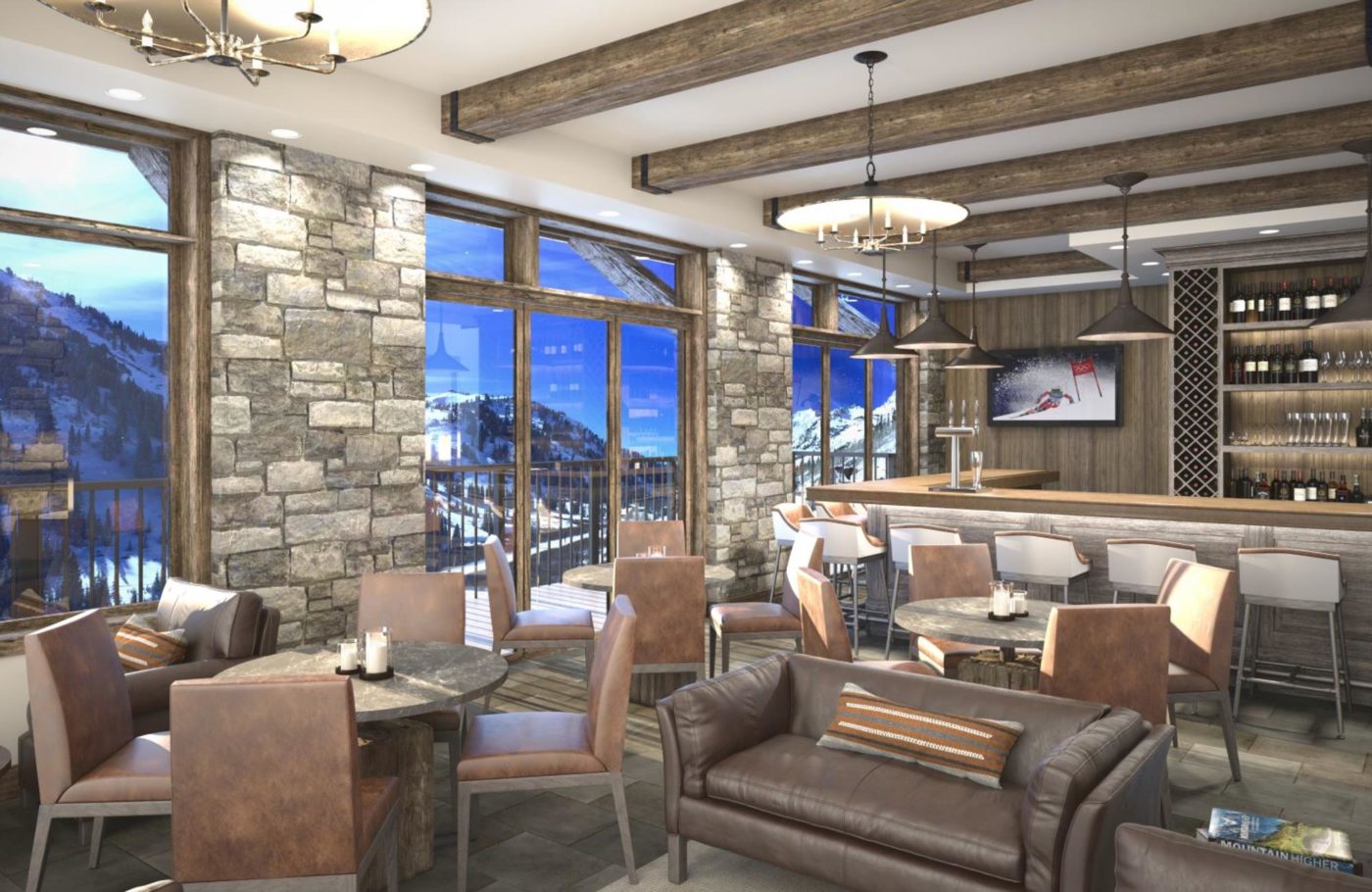 For après ski there are two restaurants, Swen’s Restaurant and The Gulch Pub, a heated swimming pool with views of the slopes, hot tubs, fitness center, spa facility with massage, stream room, and the slightly worrying that you might need it oxygen bar. Plus fire pits, ski lockers, a movie room and a fully stocked game room, for those who still have the energy.

That’s just the winter season, this resort is year-round. In the summer you have hiking, mountain biking, fishing and other glorious pursuits.  All just 34 miles from Salt Lake airport.

To celebrate the 95th anniversary of Turkey becoming a republic, the going-to-be-massive, as-yet-unnamed new Istanbul airport had a first-phase opening October 29, for two runways and 15 million square feet of terminal space — something that would be an entire airport in most of the world! At the end of December, a third runway should be operational. Final completion date is 2028, by which time we could have had three (or more) new Presidents here. 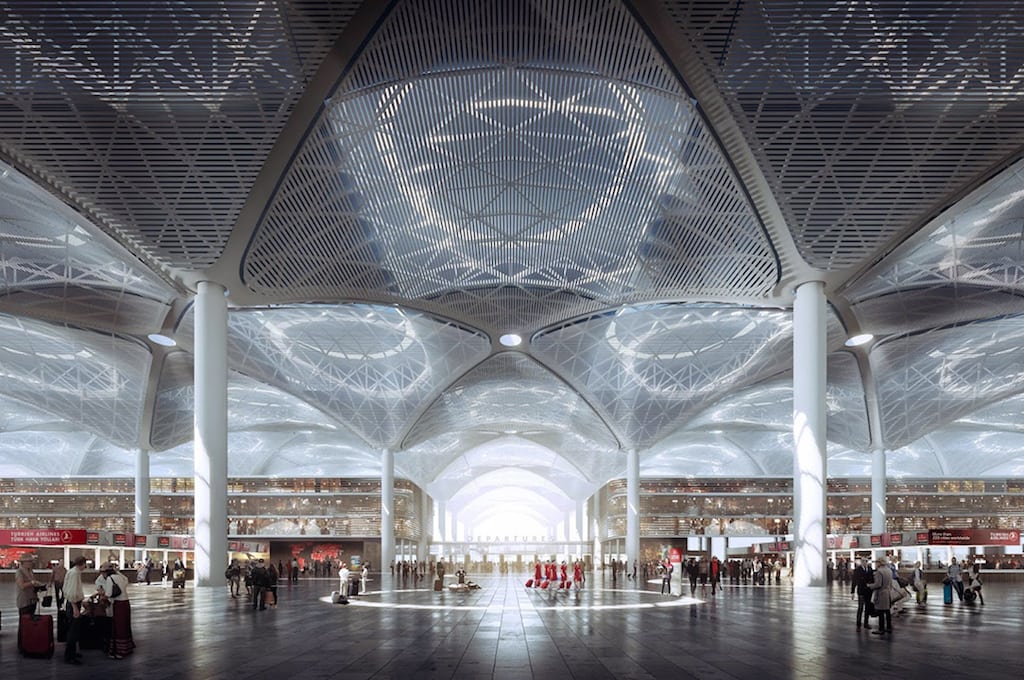 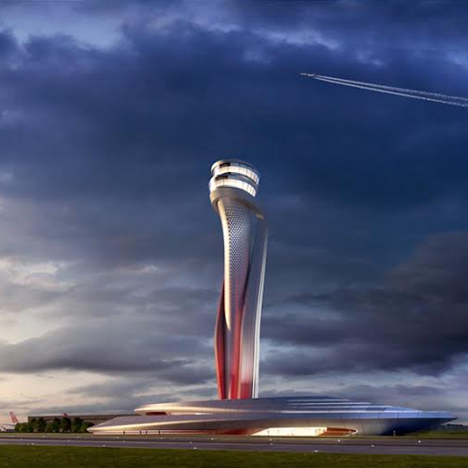 At that time, the airport (presumably named by then) will reportedly cover 29.5 square miles, an area bigger than Manhattan, and have the capacity to handle up to 200 million travelers a year. That would make it the busiest airport in the world – Beijing, you have been served. (O’Hare, get over it…) The new terminal building was designed to reflect the Turkish style of mosques and baths, and the air traffic control tower is inspired by a tulip, one of Istanbul’s traditional symbols.

Fauchon, the famous gourmet store which has been purveying caviar, foie gras and designer eclairs (you read that right, let’s just move along…) and other unique culinary creations for over a century, opened the Fauchon L’Hôtel, located in the heart of Paris’ 8th arrondissement, on September 1, 2018. 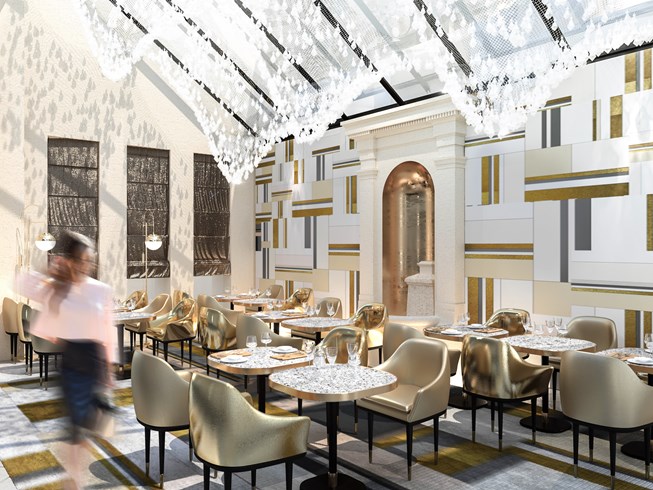 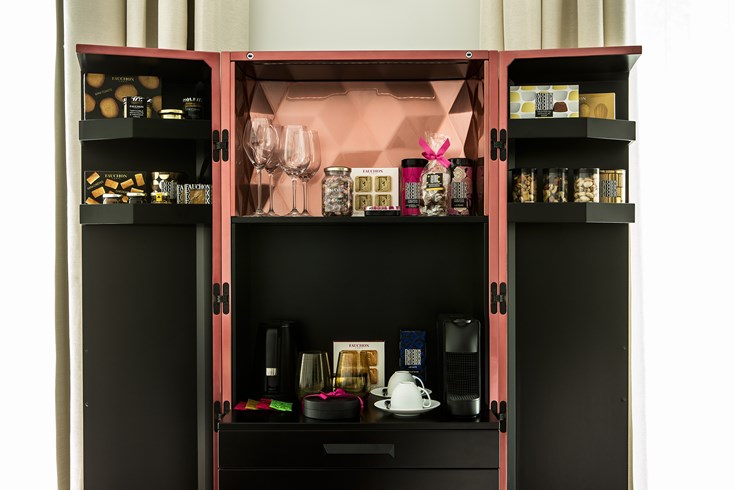 Not your Hojo mini bar

This, their first hotel, comes with 54 rooms and suites, each with “Gourmet Bars” in place of the usual in-room, and usually so uninspired, mini bars, full of hot dishes and delicious pastries. There are two restaurants, the Café Fauchon and the Tea Garden, plus the Carita Beauty Spa, the opportunity to book private dinners with your own Fauchon chef, and boat excursions on the Seine as well as personal shopping tours. Any questions? This sounds like a winner.

Bangkok, positioned at the mouth of Chao Phraya River, Thailand’s most revered river, is the new home of the latest Capella hotel, the Capella Bangkok, will open 2019. It is designed to accentuate its regal positioning and gives panoramic views of the river from all of its 101 impressive suites and villas.

The interior design of each room, suite and villa echoes the urban, interwoven with Thai elegance and heritage. There are two restaurants, the main serving dishes by award-winning Italian chef Mauro Colagreco, and a “specialty bar” offering desserts and cool cocktails. Both have sweeping views of the river, as does the grand ballroom. If you don’t like rivers, don’t stay here. The Capella Library and an Auriga branded wellness retreat, plus an assigned Capella Personal Assistant, available to attend to your every desire (one imagines they draw a line, FYI) round out the full, luxurious offering. This is a spectacular destination, on all counts.

Off-property activities include a private cruise along the Chao Phraya River on a personal boat, so you’re not with the other riff-raff guests. Another very nice way to immerse yourself in this city’s dimpled history, which stretches back to the 15th century. 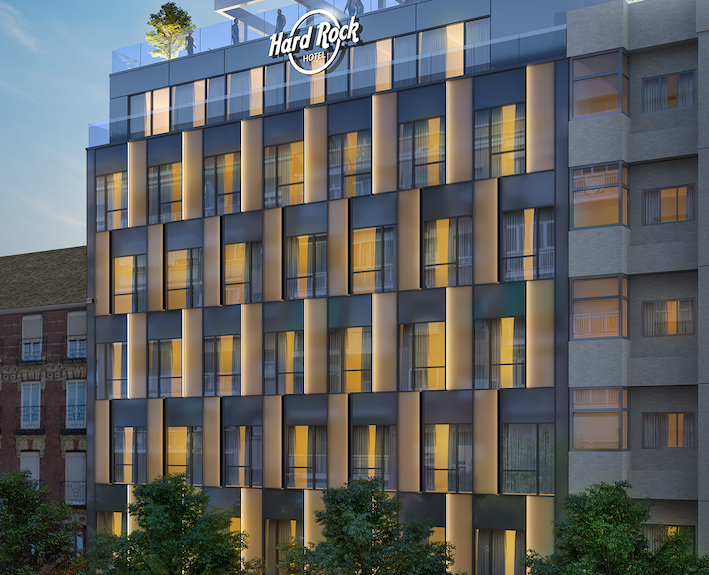 Scheduled to open in early 2019, the Hard Rock Hotel Madrid will be opposite the Museo Macional Centro de Arts Reina Sofia in the Atocha district, known for its arts and culture flavor. Accompanying the 159 rooms, will be food and drink regionally inspired in the brand’s signature restaurant, Sessions, a Constant Grind coffee bar, spectacular views over the city from the Rooftop Bar and Terrace. The amenities will include Rock Om in-room yoga (which they trademarked, because, you know, others might think of rock om) and the Hard Rock’s usual wellness program and fitness center. Guests will also get complimentary turntables for vinyl LPs (record players to older readers, like me) and some records to play on them. Or get a Fender guitar and rock out in your room — and, unless you’re any good, drive your next door neighbors bat shit. Just in case the neighbors don’t appreciate your musical chops, you can (probably should) get the headphones the hotel will lend you.

This one is close to my heart and I have very fond memories, having met my first, best husband here — God, he was great! — spent our wedding night and lived here for a month just at the end of our marriage… This was all in the 1980s. 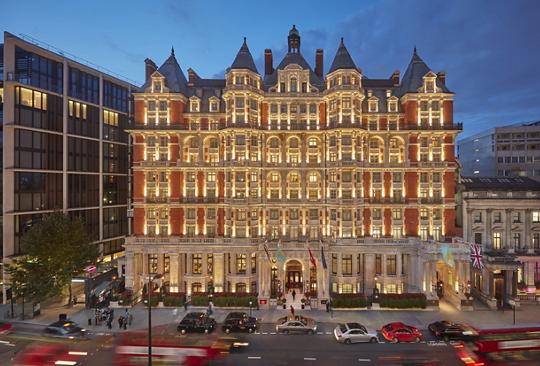 The hotel will reopen in December, just in time for the Christmas holiday season but a little later than planned following a massive fire earlier this year in the courtyard which separates the hotel’s two wings. The public spaces will reopen first, which includes two restaurants, the unimaginatively but to the point named Dinner by Heston Blumenthal, and Bar Boulud. The latter menu will offer dishes with a British twist on French classics (interesting idea — these two countries have gone to war for less). 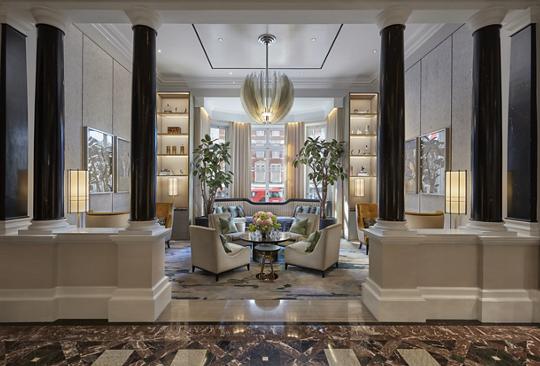 The lobby welcomes guests once again

The Rosebery will be open for afternoon tea, of course (so relax).  Also, being unveiled is the redesigned Spa, and the hotel’s four event spaces, The Ballroom, The Loggia, The Asquith and The Balfour, all restored to the original décor and furnishing and updated with the latest technology.

In spring of 2019 all the new guest rooms and suites (which include two penthouse suites) with views of Hyde Park and the London skyline, will be available for guests. And all will be right again in Knightsbridge.

The W Hotels group is venturing into Brazil, its first property scheduled to open in 2021, in Sao Paulo, in the Vila Olimpia business district. A skyscraper rising above the cityscape, the hotel is set to have approximately 180 rooms with two WOW suites (They call them WOW and EXTREME WOW suites — every W hotel has them. They have the best views, bedrooms, Jacuzzi, a living room, dining room, study — they are big, with marble floors, and a list of W signature amenities, the latest technology and bells and whistles, and the W group loves using the letter W in the names they give things…). The ultra luxury Extreme WOW suite is my room, so we’re all clear. 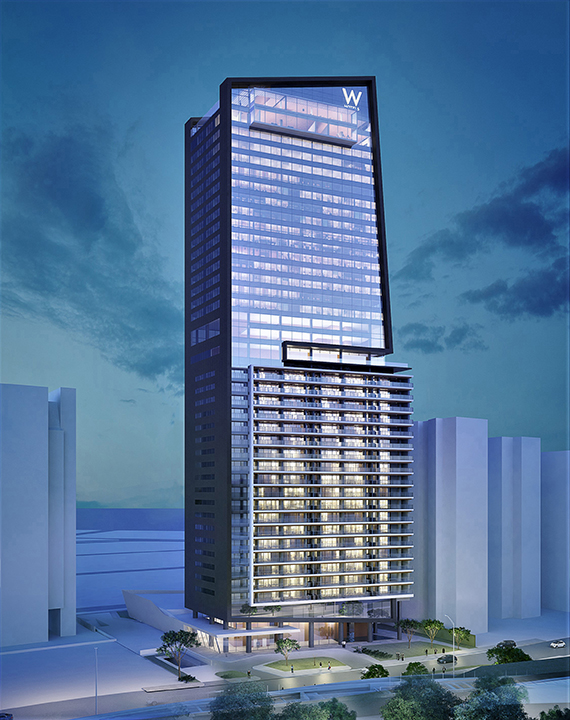 There will be two restaurants, one on the rooftop, with the Living Room bar in the lobby, the WET Deck pool (self explanatory one presumes), a “Bliss” spa (why are spas always called things like “bliss”? Is there a danger of turning up somewhere and discovering “The Unrelenting Pain and Eternal Despair” spa?). The building will be adorned with gardens and meandering paths. And, don’t forget, this is Brazil, so everything is brighter, more colorful, more sexy and sensual in general.

Won’t be hard to get to: It’ll be a short, three mile cab ride from the Congonhas Airport, and only 15 miles from Guarulhos International Airport. 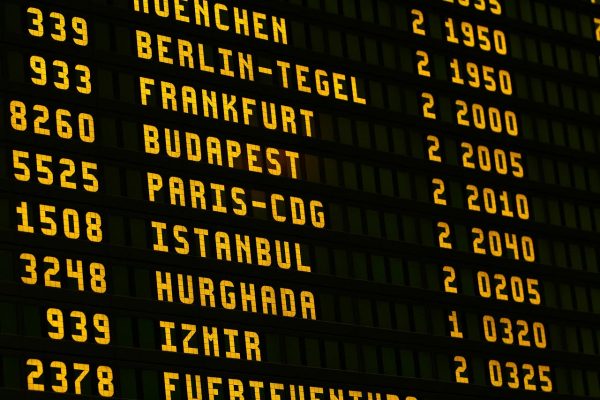