There’s a trend that has been growing over the last few years of super creative, first-time hotel people buying up dilapidated, long forgotten motels, and turning them into beautifully designed, retro-feeling and modern-functional very cool hotels. Hotels as in desirable destinations, rather than side-of-the-endless-highway, pull over for the night, mostly anonymous places to stay (although the new places invariably keep the “motel” moniker). Tourists in the Berkshires is a recent example, and Boarding House in Cape May, New Jersey, is another idiosyncratic one.

The latest, best incarnation is the The Blue Fox Motel in Narrowsburg, New York, about 90 miles from New York City, which is far enough to be blessedly away, and near enough to come from. Former Manhattan restaurateur Jorge Neves and long time girlfriend and partner Meg Sullivan found the disused property by regularly driving past it on their way to their house nearby. “We kept passing it and I said ‘I can do that, I want to do that — make that place work’, but we kept just driving past it. And then one day we said, ‘let’s buy that!’” says Neves. About three years ago they did, with third partner Paul Clarke, who bought into the ridiculous romance of the idea. 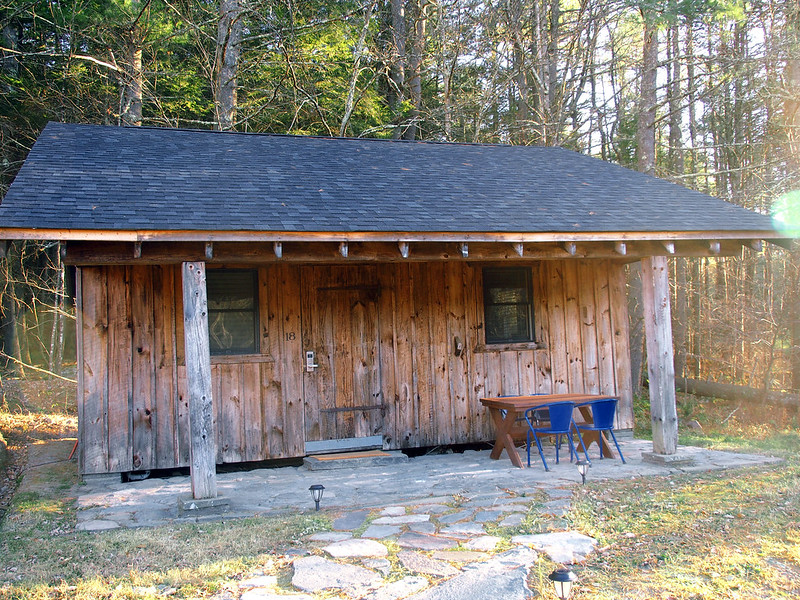 The motel started life out as a camp in the 1940s and ‘50s, mostly for hunters, fishermen and Boy Scouts, and was originally called the Ten Mile River Colony, after the river that connects to the Pennsylvania and New York dividing Delaware River. It had an Esso gas pump in front. (Sadly that’s gone, those were gorgeous pieces of a disappeared Americana.) In 1955, the owners sold the property and it morphed into a motel, remaining rustic and unfussy, cabins with bunk beds and very bare accommodations, staying more or less that way until 2010 when it was sold to a group of Russians, who, mysteriously, never let anyone else stay there but Russians. Neves described it as “Beyond disastrous” and told how locals would come into the then diner style restaurant and ask for a coffee and be told it was for “guests only”. It went bankrupt and was closed for about five years before Jorge and his partners purchased it from the bank.

“Everything was in Russian! The menus, all the signs, the sign behind the room door,” says Jorge of when he took it over.

It took them three years to renovate although “renovate” sounds too genteel a word for the rings of Hell they had to go through to make it the exquisite, chic property it is today. Under the main building, which houses the 11 king sized, elegant rooms, they found water under the floors. They completely refurbished the pool and expanded the area around it and brought in sleek new chaise lounges and a seating and eating area so that now it’s the sort of pool you’d find at the Beverly Hills Hotel or a hot Miami Beach resort. They built a parking area adjacent to the restaurant, to distance cars from the rooms and the motel style of pulling  up to your door.

Each room was completely remodeled and refurbished and ornamented with classic 60s and early 70s framed travel posters, the sort that travel agents put in the windows and on the walls of their high street shops — gorgeous relics of the time when Pan Am and TWA and Britain’s BOAC ruled the skies, when Air India was the world’s most exotic airline, perhaps for no more than being the furthest removed from the East Coast of America. A tourism poster for Sydney shows the Opera House being built — it doesn’t matter, Australia didn’t need burnishing to be enticing, then it was as remote and alien as the Moon.

In addition to the converted rooms there are four spacious, sleek suites overlooking the pool, and, further up the hill — the property ascends into a forest, and is crowned by tall, beautiful, sky scratching trees — is a ranch style, square house, removed enough to be private, which sleeps twelve, with five bedrooms (the math is intriguing and possibly exciting). This is the most expensive rental at $550 a night, but worth it considering what you might pay on AirBNB for a similar vacation lodge. 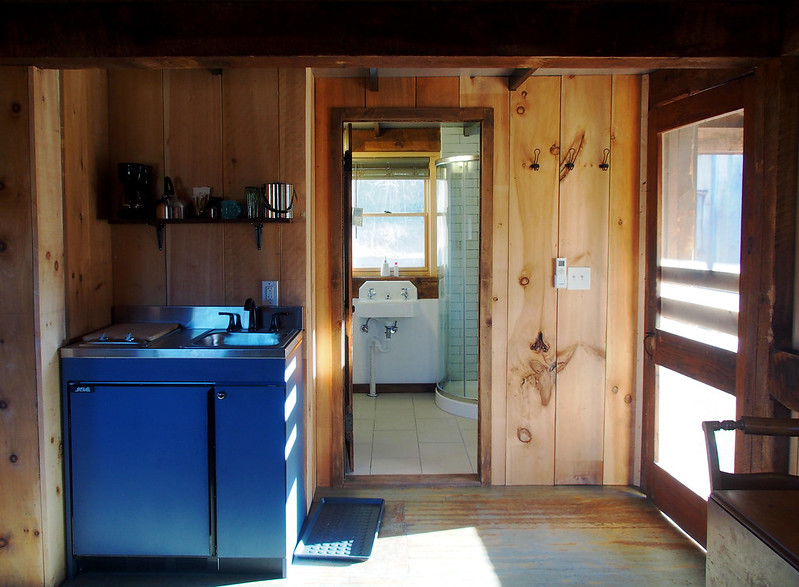 Retro chic: The cabins have been beautifully preserved and refurbished

My favorite rooms are the three suite-sized, one bedroomed wooden cabins, on their own to the right of the estate. These are the original hunters cabins, remodelled and studiously refurbished to, ironically, look like they might have 70-plus years ago, only with new, period-piece-looking furniture. The beds are best-hotel comfortable, the kind where you inquire at the front desk if you can buy one. At night the silence, fresh mountain air and crystal clear darkness further induce the sleep of the gods.

Each cabin has an old wooden picnic table outside — Neves said they stripped away the stained, filthy formica tops and found the decades old wood under it in great shape. One of the tables has the logos of seventies rock bands carved into it, like an unintended time capsule.

The place is very special, very organically so, sitting in a bit of a bowl between dense areas of trees, on a hill rising from the quiet two lane state highway 97, and it would be hard to replicate. The pool is a slice of paradise because it’s not squeezed into a found space, and the sun hits it all day. 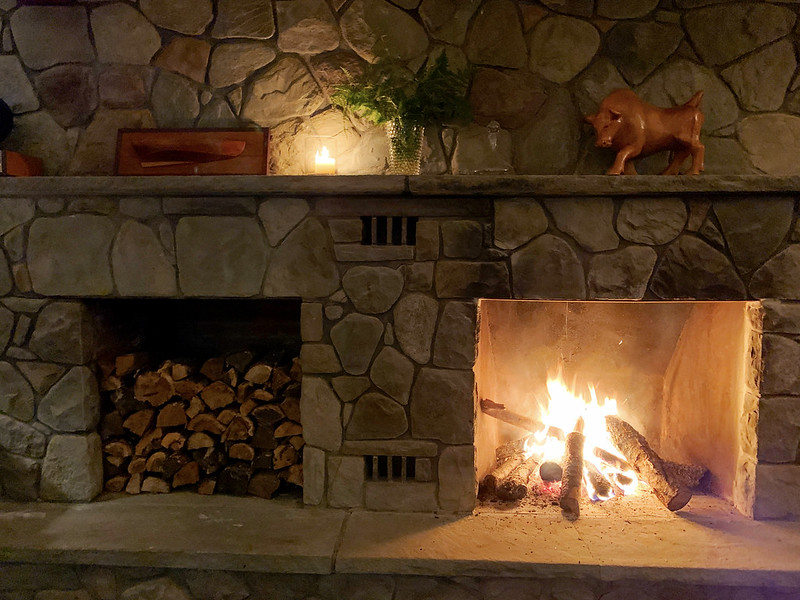 The fireplace in the restaurant — you don’t have to be Russian to eat there now!

“I loved the original name, and wanted to keep it,” says Neves explaining why it’s called, instead, The Blue Fox. “But all the negative reviews from the previous ownership meant we had to change it.” A friend used to call him the Silver Fox, so they “played around with the name and came up with the Blue Fox.” 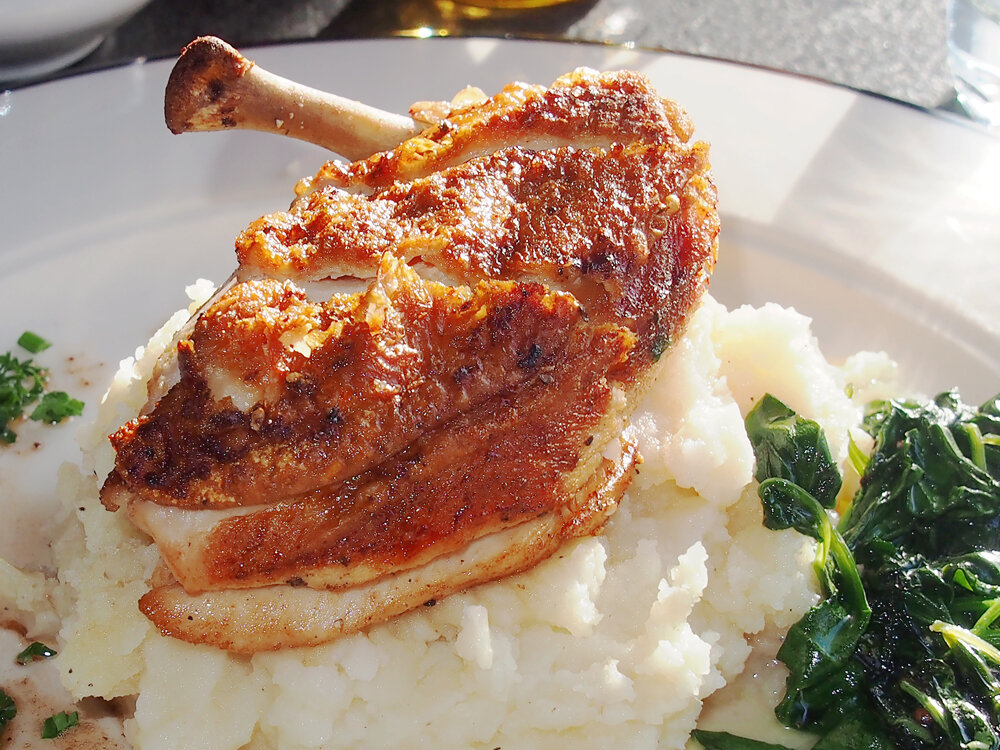 The “boutique motel” as they like to refer to it was due to open in the spring but the pandemic effectively although not officially shut them down. They had the restaurant open before then (and it’s open now) and it was (and is again, in the limited way it can be) a local smash hit, serving locally sourced “Classic American fare” (which means, I think, not just hamburgers, but, you know, you can get a great hamburger), a mind blowing roast chicken, an indulgence-rewarding pork belly dish, and an enigmatic selection of delicious Portugese specialties. Neves is Portugese, and his flagship restaurant in New York was Pao!, a Tribeca Portugese landmark for 20 years. The chef from Pao!, Honorio Anguisca, is the chef at the Blue Fox. This is a very good thing.

The Blue Fox is not on any booking site, the owners proudly told me, and has sold out all its weekends so far (but people cancel, remember, so give them a call). You can stay in one of the king rooms for less than $200 a night, which is incredible for this tony, farmy area of New York State, and not likely to last; a bit more for the cabins and suites, but still reasonable.

This is Cowboy Luxury. What, you haven’t heard of that? Read on!

The Rafiki Safari Lodge in Costa Rica is a very, very special place

Room with a Beach

Room at The Beach, in Bridgehampton, NY has created a glorious spot, and tone, and is great for a summer getaway 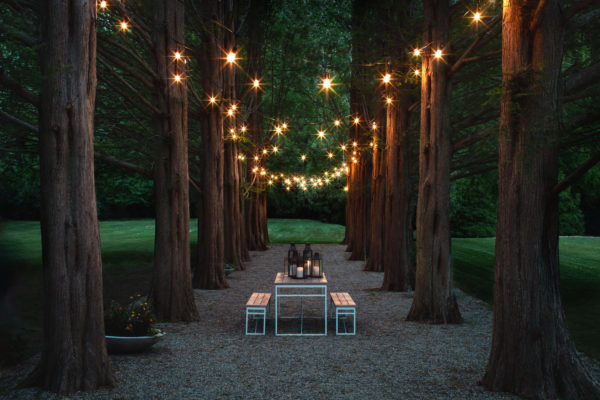 Why wouldn't you have a picnic under some redwood trees?