The Pisco Sour is a celebrity among drinks, a bit of an “It” cocktail, sophisticated and fun and elegant. It’s refreshing and deceptively strong and revolves around Peruvian Pisco liqueur, which is made by distilling grape juice until it is high proof. Do not underestimate Pisco.

Larry, the bartender extraordinaire at Red Farm, the quirky, exceptional Chinese restaurant in New York’s Greenwich Village, doesn’t use Pisco among the roughly 600 ingredients he does use, but has instead come up with a mostly Japanese inspired and shaped version.

He is from Jackson Heights, in the New York borough of Queens, “one of the most culturally diverse places on earth”, he says. That alone makes a person open minded about tasty possibilities.

“My history of bartending comes from working at airports and street side restaurants in New York City. Among all the positions in the restaurant/hospitality industry, I have to say that bartending has allowed me to express and apply my experience, but more importantly my creativity.”

The Pisco Sour has a legend to it. In 1920, an American Mormon called Victor Morris went to Peru which was booming at the time. He brought with him a stash of whiskey, his Mormonism apparently not stretching south of the equator, and set up a bar, where he made whiskey sours. But even a stash is finite and one day he ran out of whiskey. Necessity being the mother of invention, as you know, he grabbed the nearest spirit at hand, which was Pisco and made a sour with it. Voila! Civilization took a giant leap forward.

However, it’s possible he didn’t invent it — for the record, we don’t care — because an article published in 2013, sleuthing the origins of the drink, showed a photo of a recipe from a Peruvian cookbook of a cocktail, christened just “Cocktail,” that sounds a lot like, but not exactly like, a Pisco Sour. So we probably will never know who first thought of it — it’s a question for God on Judgment Day.

“I’m always up for a challenge to make something different. I love bartending, it’s always exciting to speak to new people and help create memories with all their senses,” he says, pushing his own seductive concoction across the bar… 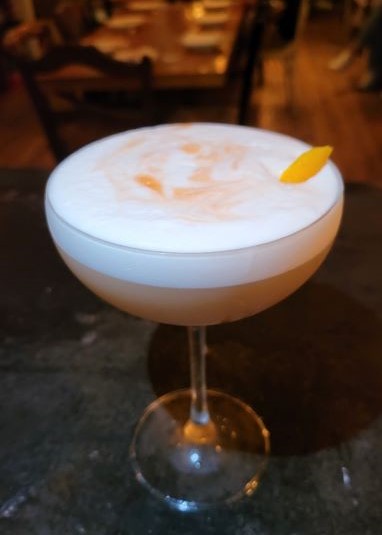 The Dragon Sour takes its shape from the Pisco Sour and its influence from Asian cuisine. I came up with the cocktail while working at Decoy/Redfarm in New York City. I love Pisco Sours and wanted to come up with my own cocktail to offer before or after dinner. Having multiple Asian ingredients at the bar made it fun to play with. If dragons were real and one would ask me to make the most delicious cocktail to evoke their spirit, this is it.

This cocktail is perfectly sweet and sour but deliciously textured and flavored, almost like a dessert. The yuzu and lime juice gives it a tarty brightness, the goji gives it a mild flavor of dates, the ginger adds spice, the Chinese bitters adds hints of tamarind, mandarin, ginseng and peppercorn oil, and last but not least the bold flavor from the charred nori, which is the aftermath of a flaming dragon, gives a slight taste of the scorching the sea.

In a shaker pour all the ingredients and vigorously dry shake, then shake hard a second time with ice until shaker gets frosty on the outside. This is important – it’s not ready until the shaker has a frosty coating on the outside!

Double strain into a coupe glass, then add the garnishes; 5-6 drops of Chinese bitters and finish off with the oil from the orange twist.

These are the key ingredients and how to handle them:

Nori infused whiskey  Take one sheet of nori (seaweed) and with a blow torch — yes, a blow torch — and lightly char the sheet until crisp on both sides. Infuse this in a stainless steel container with Japanese whiskey; let it infuse for about 8-24 hrs.  The longer it sits, the bolder the flavor.

Goji ginger syrup  Make simple syrup but include the dry goji berries in the batch before pouring in the hot boiling water.