If you tell a New Yorker you want to go to Long Island to cure your craving for tropicana, they might look at you funny. Long Island to them is a crowded train or claustrophobic bus away, or 90 miles of standstill traffic before a summer season weekend, and while its beaches are exotic by Manhattan standards, it, doesn’t compare to the original Long Island, the one you had in mind.

On his historic 1492 voyage, Columbus himself christened Long Island in the Bahamas Fernandina, but its 80-mile-long by 4-mile-wide span led it to be dubbed, sensibly enough, Long Island in later years. Its original settlers were from New England and New Jersey who, in the late 1700s, fled the American Revolution for a less populated, surprisingly fertile farmland. But by the time slavery was abolished, almost 100 years later, the farms were baron and its landowners fled. Today the island’s population barely tops 4,000. Romantics like me delight in the fact that its landmass is split by the Tropic of Cancer. 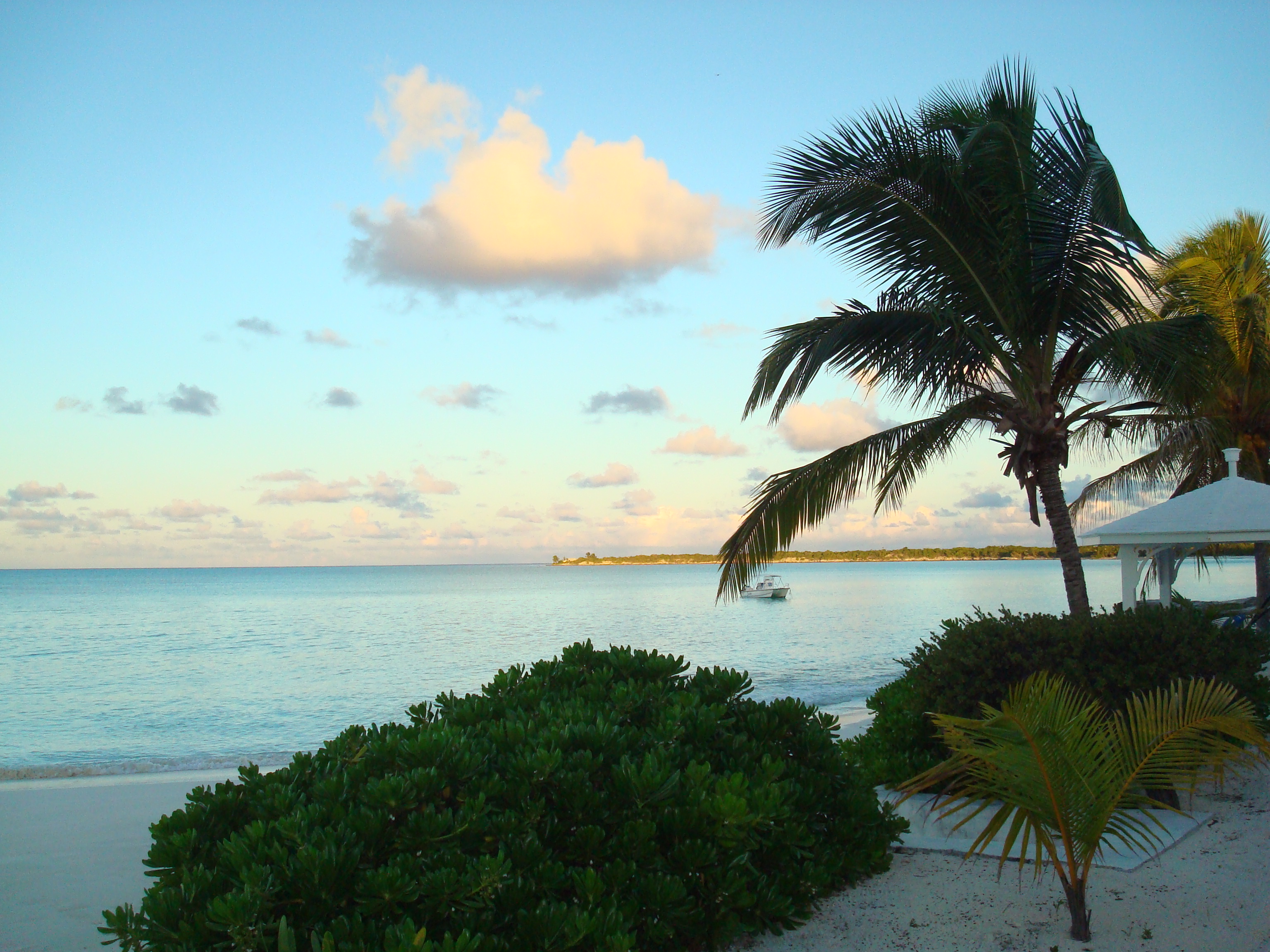 The remains of the day***Liza Lentini***

Cape Santa Maria, a prime beach hotel just 20 minutes from Deadman’s Cay Airport, boasts a beach voted “Most Beautiful” on various lists in perpetuity, and forever the skeptic I was sure this was to disappoint. But at first glance I was humbled. The beach makes up for its small stature with absolute perfection — stark white sand as fine as flour; clear blue ocean which redefines serene. I looked up and I looked down, and waited for the effect of such a sight to settle in. Absent were the abundance of umbrellas, the jet skis, the cocktail tray-carrying waiters on the beach. They all would have detracted from this purely organic scene.

The hotel itself is modest and low key, with bungalows aligning the beach, each designed for a glorious sea view. It’s a resort which suits my personality to a T — low-key ask-and-you-shall-receive service with little fuss. Amenities available for booking include in-room massages, scuba adventures, boat charters (the last two not in room, in case there was any confusion). I was relieved to find, during most of my stay, that the ocean was too wild for the last of the two, so resolving to read and lounge on the beach, and plan one full day to roam around the island. 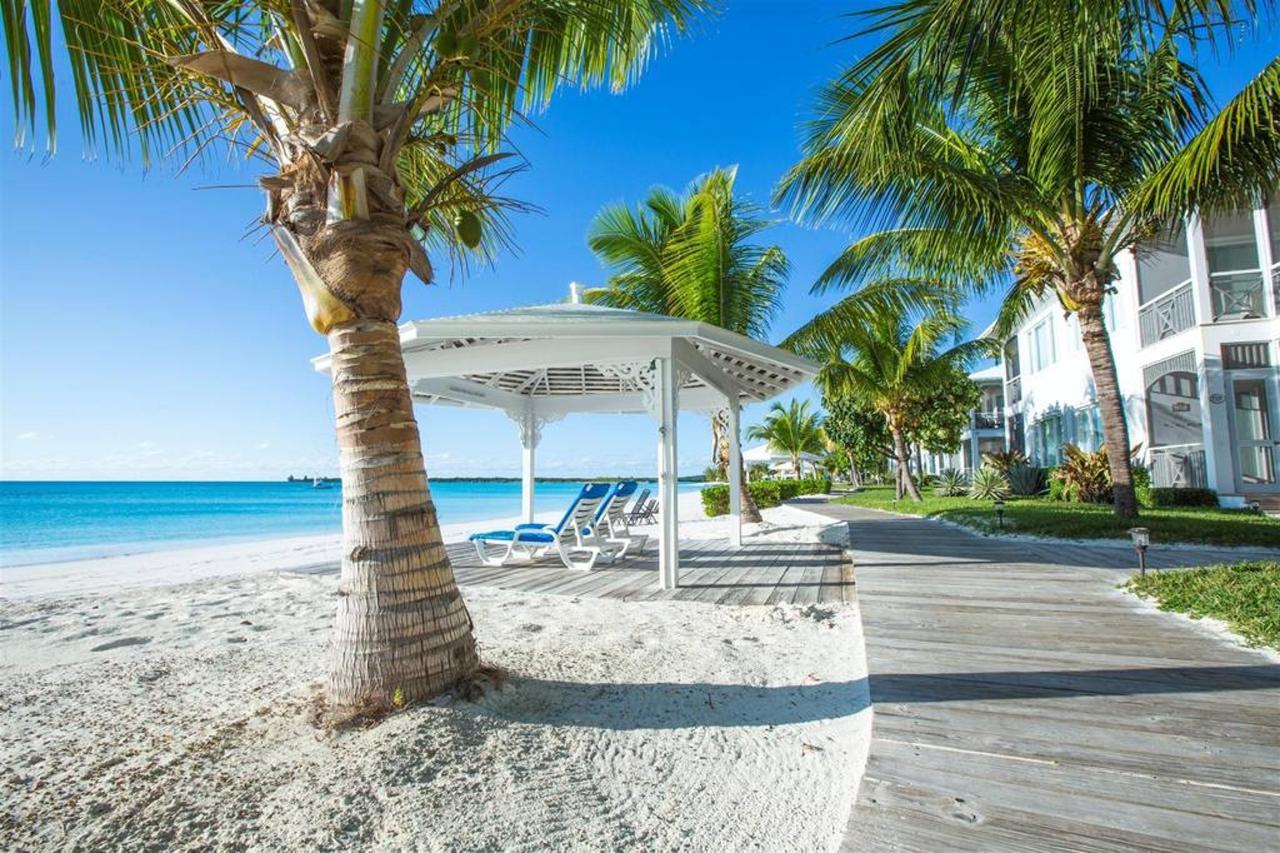 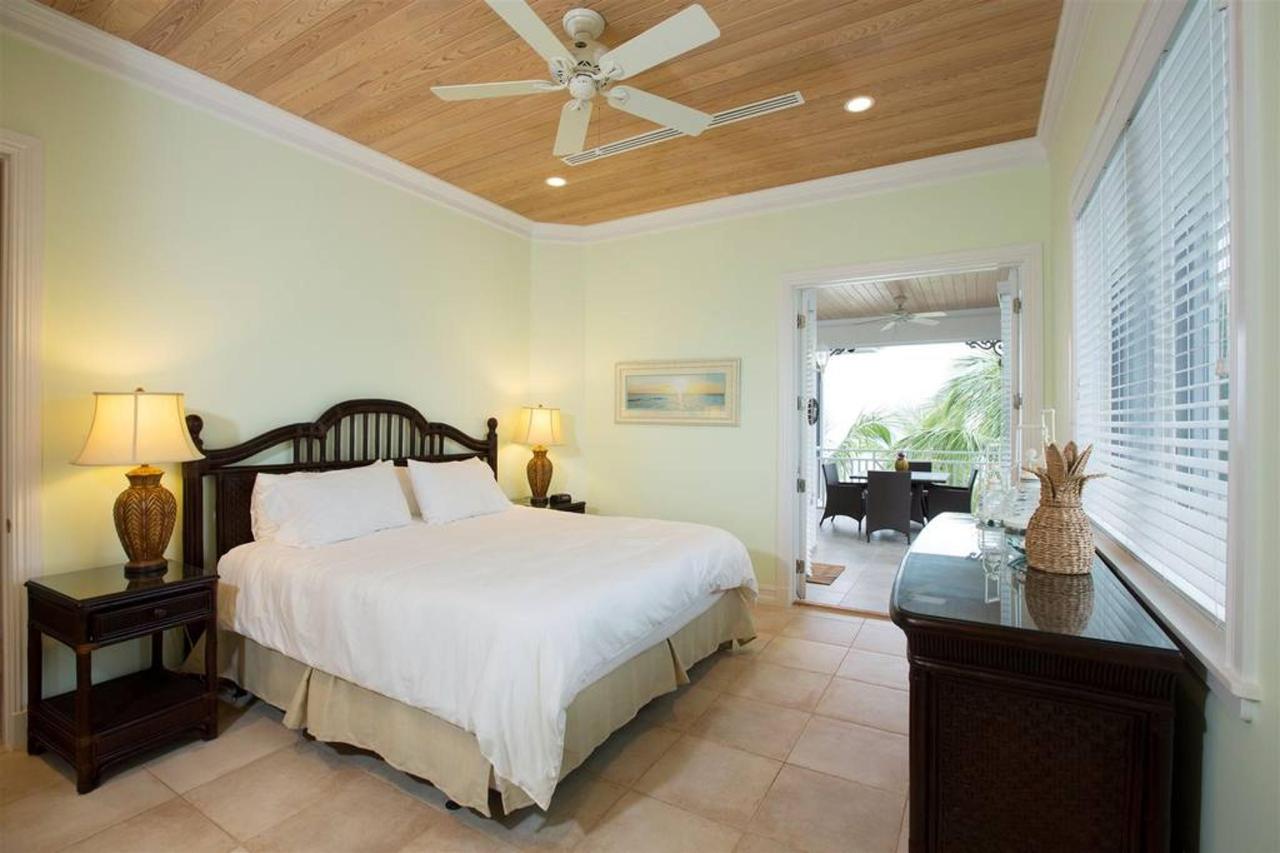 Top: The area in front of the main building of Cape Santa Maria. Below: One of the simple but serene bedroom suites with a terrace overlooking the ocean

Armed with a map of the island, a fresh bottle of water and keys to a surprisingly casually obtained rental car for which I’d paid $20 cash, I approached someone about how to get to the more touristy part of the island.

“Which way…?” I asked the porter at the hotel.

He made a grand, definitive gesture with his forearm, much like that of a crossing guard. “One road,” he said, “straight down.” 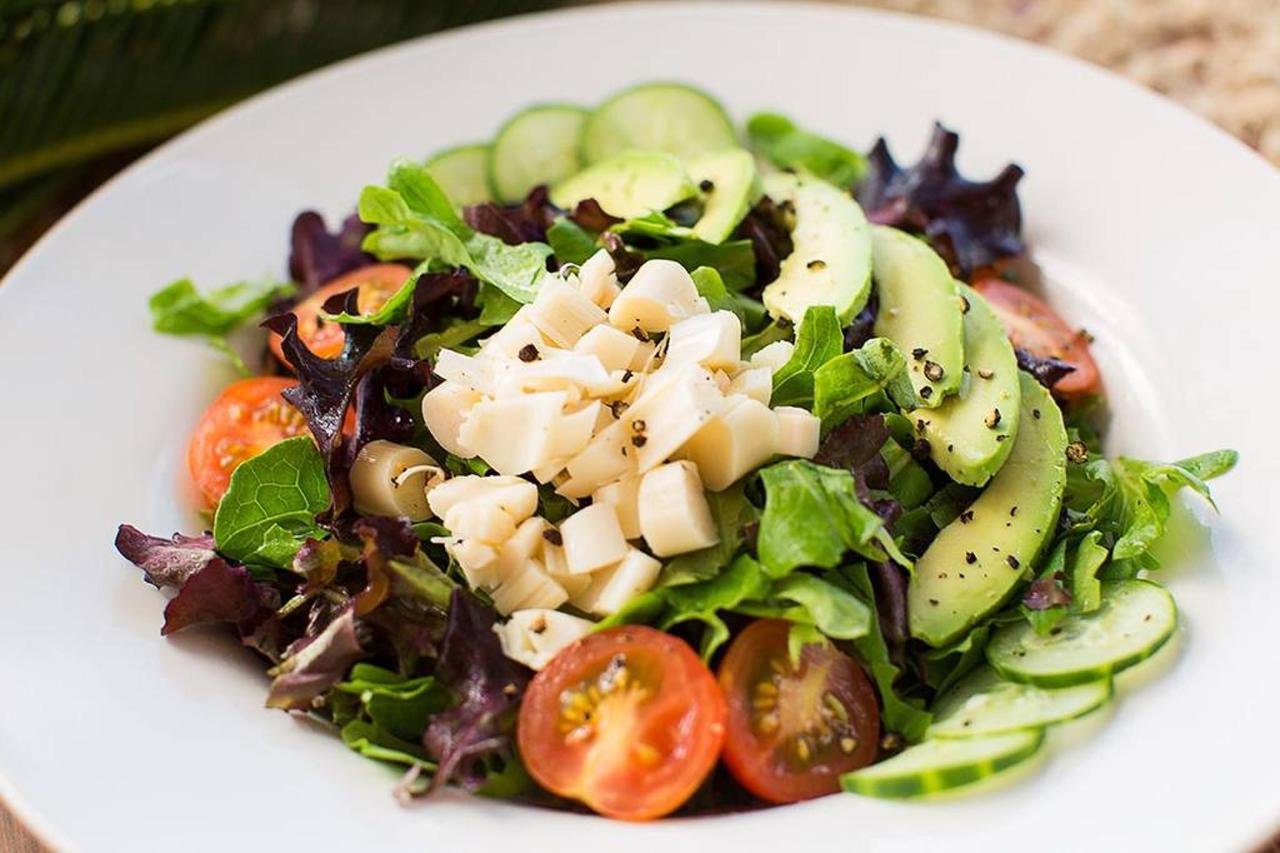 Top: Big fish, big ocean. This guy is not going back into the water, this is dinner. Below: Conch is ubiquitous on the island, but this salad at the hotel is delicious. In the evening, they give away fried conch in the bar…

Whizzing along the narrow “one road”, one can witness the island’s deep respect for its own history, and its resistance to launch too far into the future. The wild, roadside grass spurts signs bearing the name of the settlements, marking my descent towards my destination. They are in the possessive — Hamilton’s, Buckley’s — because Hamilton and Buckley lived there. One could never tire of the magenta, aquamarine and bright gold stone shacks one after the other, short and stout. The landscape left one disbelieving the early legends of fertility, its dry, dusty palette inspiring only thirst now. 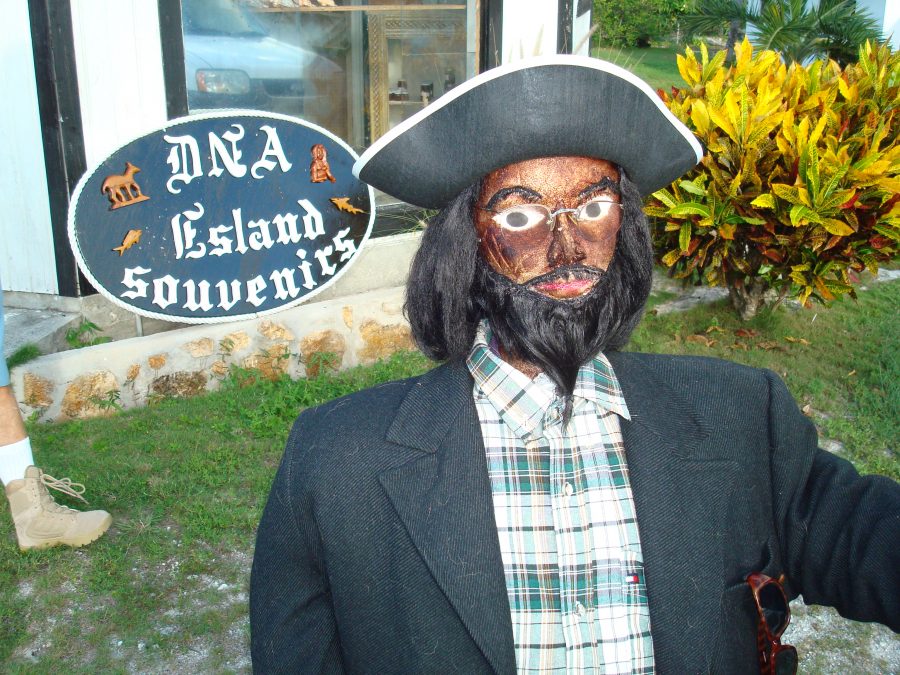 This is not a real Pirate — they didn’t have sunglasses!***Liza Lentini***

Spotting a life-sized stuffed pirate in a lounge chair, I simply had to stop and see what he had to offer. He guarded a small shed which housed a variety of handmade, shell-inspired creations. The shop girl — who had darted from her house upon my arrival, which still vibrated with Michael Jackson’s “Beat It” — was also selling homemade cookies and sweetbreads.

About an hour later, I’d reached the end of the island, and my tourist instinct kicked in with ease. It was rumored there was an occasional market vendor who would sell the required T-shirts and knickknacks, but on this day, not a soul in sight, no market, no street dwellers, no locals. No one. And none of them were missed. I’d make an adventure on my own.

First stop was the much-lauded town church, proud and preserved, which easily rivaled many of the small churches I’d seen in the Italian countryside in its impressiveness. It was clear from first meeting that this church was loved, and carried the faith of many followers. Unlike so many others, it had been designed for light to stream through at every angle, making it a warm and inspiring center of its community.

Next, the farthest tip of island, decorated with boat docks and fresh fish, fried. When I stepped out of the car a welcomed chill ran through me, and I started for my jacket. Behind me construction had halted on a seaside mansion and its stone remains lay like mighty ruins; to my right, the restaurants had already shut for the day. Having not spent a dime and feeling rich with experience, I was ready to head back to the hotel.

On the way I pulled the car into a random road stopping in front of a gigantic mound of boulders. After climbing up and over, I arrived on a rocky patch of sand, inhabited by some of the most gigantic gulls I have ever seen, unnerved by my presence. I walked to the water’s edge and marveled at the bright streaming sun just beginning to set, a mandarin orange, in stark contrast to the darkening water, so clear one could see its rocky inner depths. 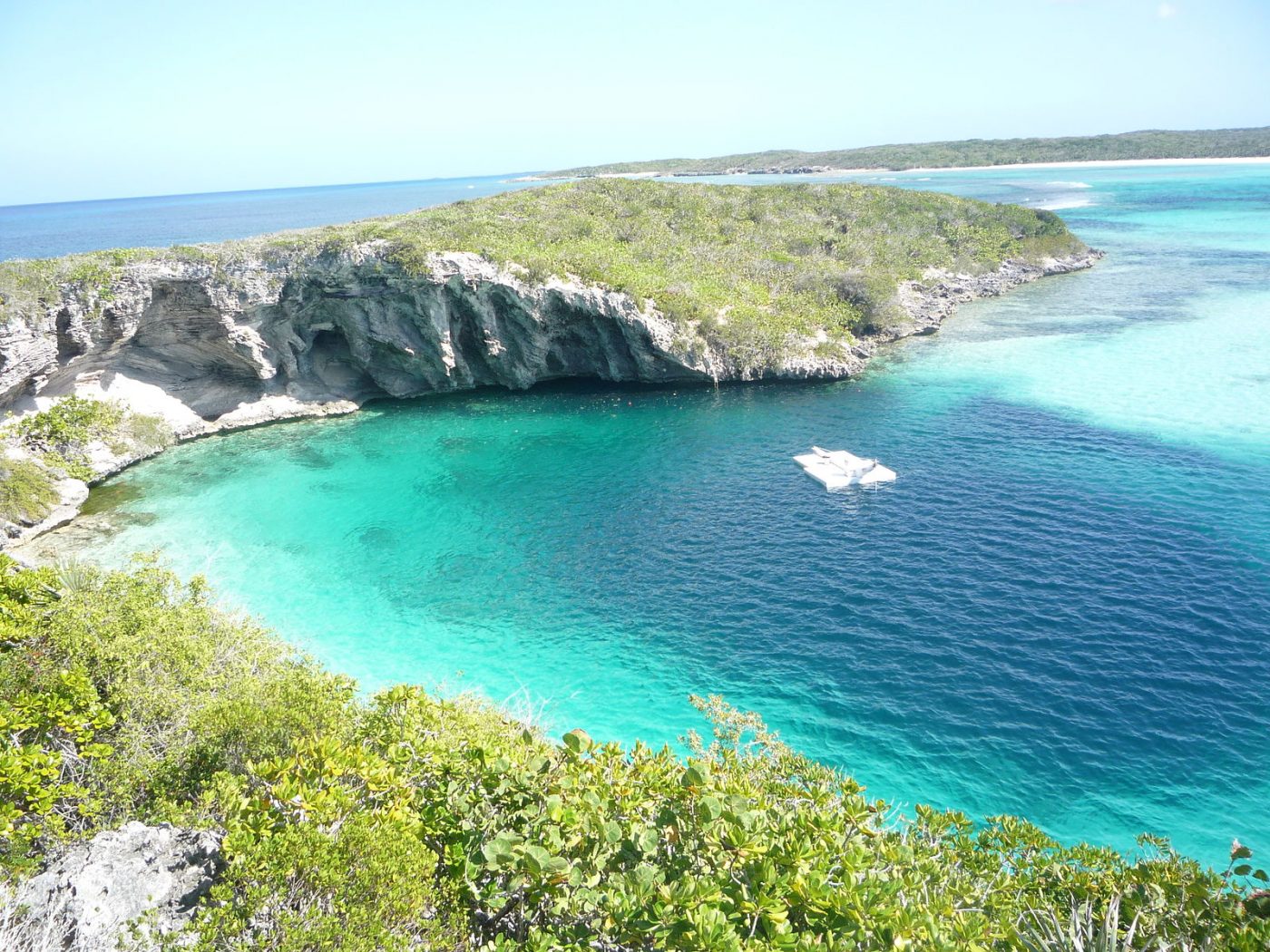 The aptly named Dean’s Blue Hole, until a couple of years ago the deepest known sinkhole in the world***Ton Engwirda***

My mind went to a conversation from earlier in the day, when I’d asked a couple of residents about Long Island’s main attraction, Dean’s Blue Hole. At about 660 feet it was the deepest sinkhole in the entire world until the discovery of an even deeper blue hole in the China Sea in 2016. “Would you swim there?” I asked, attempting to grasp the concept of its near bottomlessness. The two women were not of the same mind. One would swim there, and has; the other would not on account of some recent drownings. I resolved to stick to a safer curiosity, Long Island’s famous colossal caves, which on occasion were candlelit for drinks and dining.

That evening, back at the resort, I met a couple from Scotland on their honeymoon. They’d married in nearby Florida, and were touring the States before heading back to the U.K., their budget eased by renting a small plane in America, the groom having being an experienced Royal Air Force pilot. He offered a personal, sunset soar which was impossible to resist, and off we went. 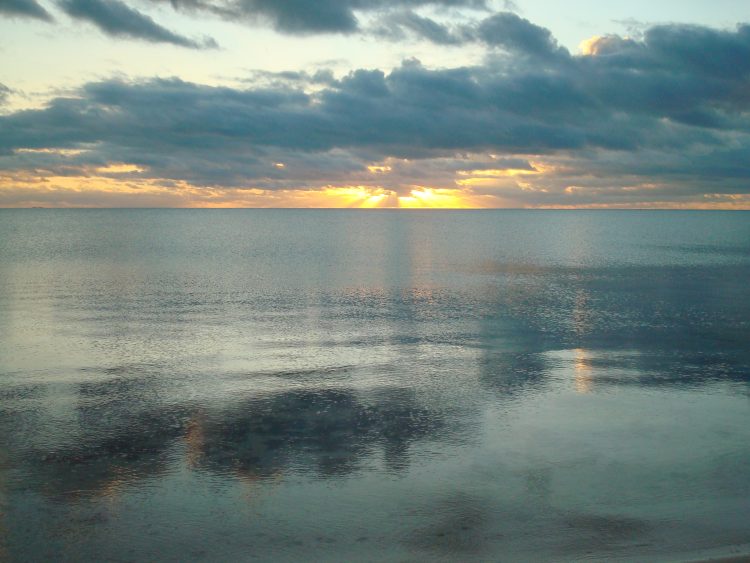 Until that night, the Long Island sunsets had been bright and stunning, but at this very moment there was a mist in the air which turned every sight a saturated indigo. As my driver pointed out the sights like a dutiful tour guide, I wondered with trepidation what would become of Long Island once the word got out. Its magic lies in what it lacks — trendy restaurants, shopping spots, and, most importantly, people — thereby illuminating its natural essence.  Though they have tried, lesser, more populated islands cannot replicate Long Island’s innate tranquility.

“There it is,” my pilot friend said, pointing downward. “That’s Long Island.”

Time moves slowly, or maybe it doesn’t move at all 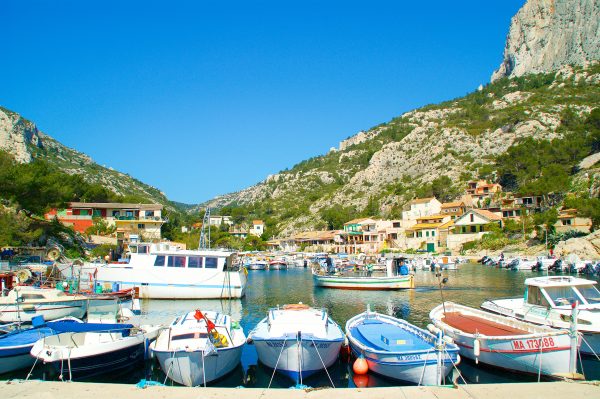