I was 26 years old, on a Contiki trip touring Australia’s east coast for two weeks. Our final city, Cairns, known for its proximity to the Great Barrier Reef, is also a hotspot for skydiving.

Other than snowboarding in the Swiss Alps with no snowboarding experience, skydiving was the most extreme, and possibly dangerous, activity I ever willingly signed up for. Several of my travel companions signed up with me to do a tandem jump with the most laid-back Aussies at Paul’s Parachuting. (Paul’s has since closed.) I wore a Superman T-shirt for good luck. I guess. 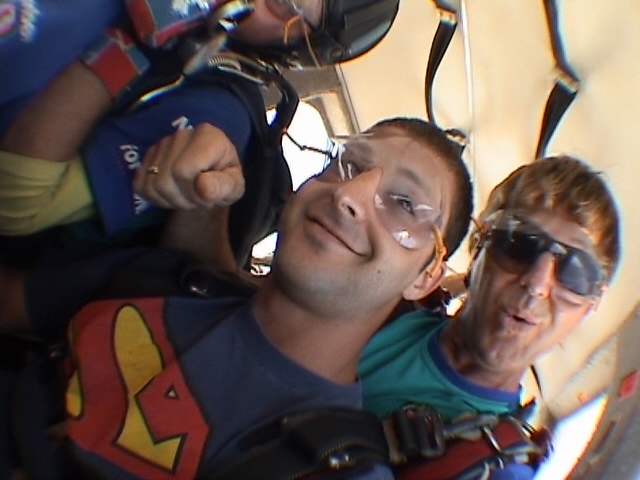 The author looking somewhat calm before the big jump

They picked us up at our hotel in the early morning hours — morning jumps are better, particularly in warmer months, as the air is cooler. When we arrived, we signed our lives away. Well, you’re either going to make it or you’re not, right? After putting on skydiving pants and grabbing a pair of goggles (no helmets, mind you), we met our instructors – mine was Glen – and were given only a five-minute tutorial on how to jump and land with a complete stranger strapped to your back: get on your knees, lean your head back, lean your body forward, arms across your chest (you’re now shaped like a banana), the instructor will tap you on the shoulder to jump and out the plane you go. Then put your arms out, freefall for 60 seconds, then the chute will deploy. Land. If all goes well.

We boarded the plane and quickly ascended to 14,000 feet. Anything higher and you’ll require oxygen. I had a piece of gum in my mouth and had nowhere to throw it away and didn’t want to swallow it. Everyone says you get nervous when the door opens. Our plane had no door, to open or close. I started getting nervous when the first person, Tegan, was prompted to the doorway. She leapt and with a loud whoosh, vanished under the plane in a half-second. “What, where did she go?”

All of this anxiety was causing me to feel the urge to pee, which is completely normal for the brain to respond this way as your muscles tense up in stressful situations.

It was now my turn. Glen, who had completed hundreds of these tandem jumps, knew I was nervous. And I should be. My life was in the hands of an absolute yahoo who I met 20 minutes ago…and I had no helmet! Though is wearing one really going to help with any impact? I got into position at the edge of the doorway. I looked out – shit’s about to get real. Glen tapped me on the shoulder. I froze. I shouted, “Just push me!” 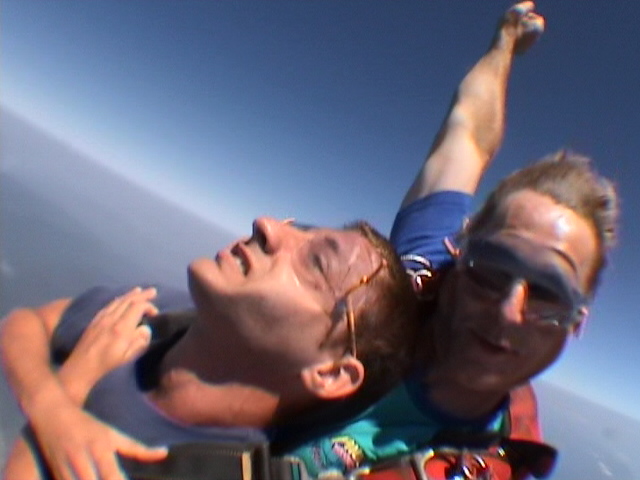 Thinking: What the f–k has Glen gotten me into?

The first three seconds after jumping out of the plane was the scariest but then adrenaline takes over. Despite the cold air surrounding me, my heartbeat racing three times the normal rate and shouting my head off, I opened my eyes as my face felt the g-force, and looked out over Australia’s northeastern coast and felt complete peace…hurtling through the sky at 120 miles per hour.

During the 60-second freefall, I couldn’t speak. I was unable to breathe through my nose. Smiling for the camera was not happening. I still had the piece of gum in my mouth. Snot was flying everywhere and I had a huge booger on my face the entire jump. My biggest fear now was my shoes flying off my feet. There’s reasons humans can’t fly, no matter what T-shirt you’re wearing.

Glen warned me he was about to pull the parachute. This part hurt the most because when it deployed, I got jerked up and the harness did a number on my crotch. The rest of the descent was calming. Glen let me guide the parachute. Taken aback by what was in front, below and all around me, I had totally forgotten I just jumped out of a plane.

For the landing, we were instructed to keep our knees up, legs out with our hands holding them from underneath. We had a safe and smooth landing, I had wobbly legs and snot on my right cheek. But this was the most exhilarating experience I had ever had!

I showered when I returned to the hotel. 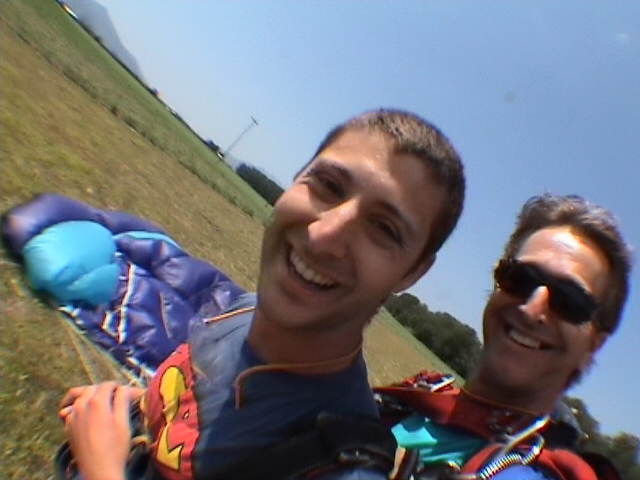 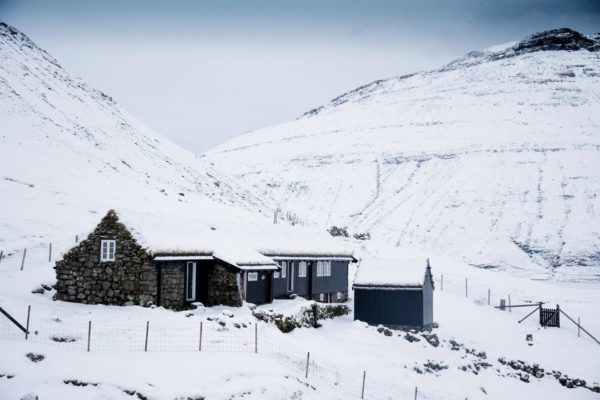 KOKS in the Faroe Islands is not that easy to get to, but it's worth the effort...