All Photographs By Leoni Milano

Ramadan is the ninth, and most sacred, month in the Islamic calendar, during which strict fasting is observed from dawn to sunset. Very strict.

As a rebuttal to this fast-paced, instant-gratification world of ours, I decided on a whim to join the 1.8 billion Muslims around the world last year for this religious observance. The beginning and end of Ramadan is determined by crescent moon sightings. It is considered a time of deep spiritual connection, reflection and community, and I was curious about what this experience felt like for my Muslim friends.

I had no idea what I was about to get myself into, or that I’d be relinquishing my daily intake of coffee and chocolate, rather abruptly. For the past few years that I have been residing in the United Arab Emirates, I didn’t know much about Ramadan, beyond it being that time of the year when I had to hide to eat. In a Muslim country, it is prohibited to eat or drink in public during Ramadan, regardless of who you are, so this makes for a rather interesting cultural initiation.

With great determination I announced to my Muslim friends that I was about to embark on this journey with them. This was met with multiple emojis: rolling on the floor laughing, crying tears of laughter and — after the amusement died down — more welcoming hugging and grinning faces. In fact they were thrilled, and answered all of my curious questions eagerly and without judgment. They put up with my complaining (“I’m tired”, “I’m hungry”, “We only have six more hours until we can eat”), and basically cheered me on to not give up, as I battled my way through the gruelling first days of headaches, hunger, thirst and tiredness as my body adjusted.

My first day gave way to a mild panic that steadily increased until I was convinced they had some kind of super power or secret that helped them get through. I was so far out of my depth I almost caved… but was saved with words of encouragement from my friends. They said it would get easier and I believed them. I put sticky notes all over my fridge and kitchen cupboards (do not eat, do not open) after realizing, pre-Ramadan, that I would eat without thinking. 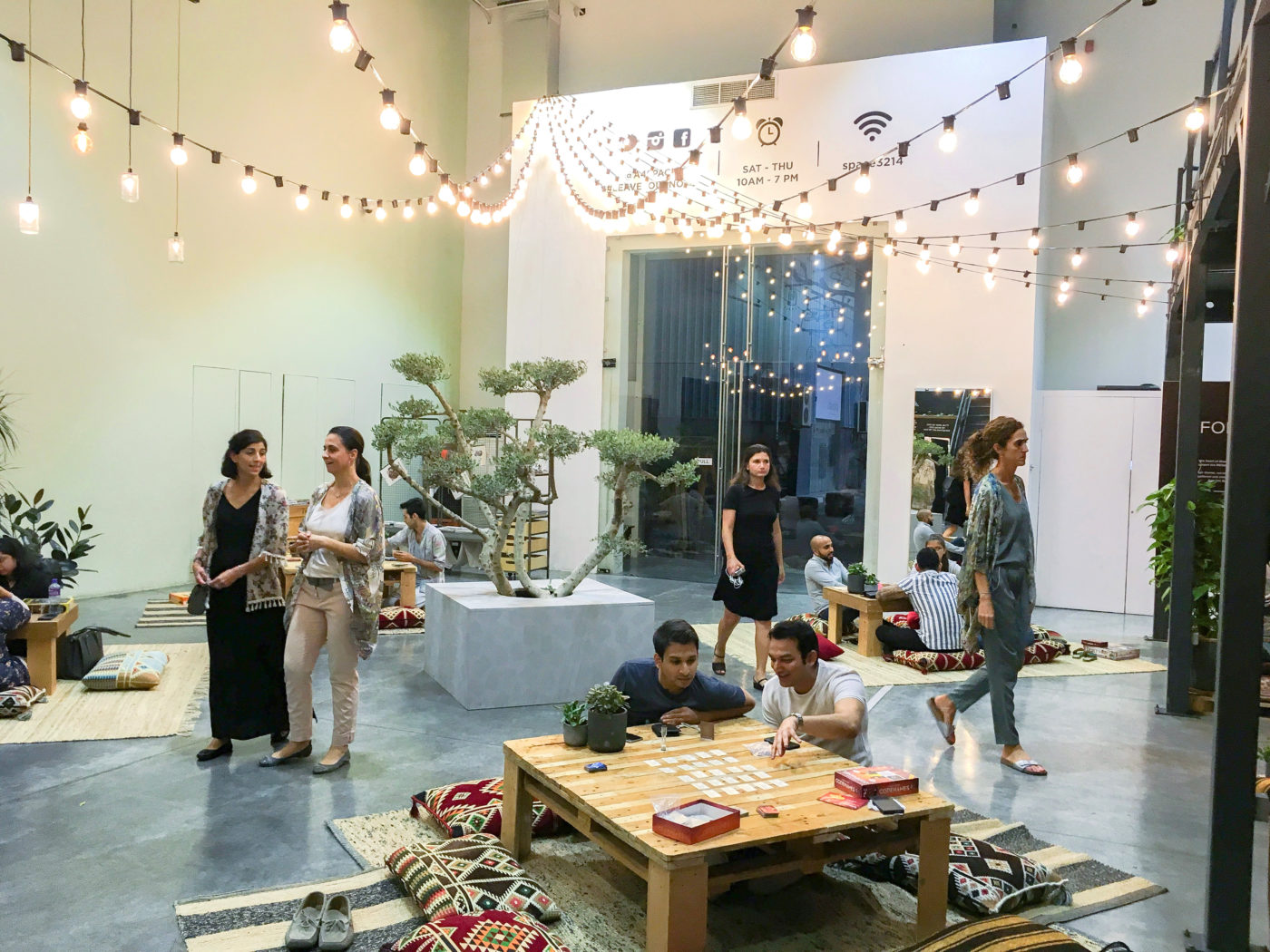 Nighttime board games at a cafe in Dubai’s art precinct, Alserkal Avenue

With this self-imposed immersion, I began to understand Ramadan. I planned better and took greater control of my mind. I eventually succumbed and started to enjoy it. When heading off to the office kitchen, I asked a colleague to make me pretend cups of tea and I’d scold her for making it with too much milk, or using the wrong cup. It didn’t matter that I would slide halfway down my chair throughout the day due to fatigue; because I knew there were probably millions of others doing the same thing. Feeling uncomfortable and weird felt strangely comfortable.

I had created five alarms – not for the five daily prayers (that was additional and a time where a friend suggested I take a moment to reflect). This was just to ensure I would wake up each morning, eat, go back to sleep for a couple of hours then wake again for work. The first of my two meals a day was Suhoor, at around 3.30am – muesli, yoghurt, banana or berries with a pint of water. I’d try to maximise my input and fuel myself for the day. Standing on my balcony I would look out to the distant mosques and wait for the first call to prayer (for Fajr), a mesmerising and hauntingly beautiful sound that would carry across the empty morning sky.

Each day as sunset approached, you could see and feel an increased pace in activity as people sprung to life, scrambling to their respective meeting places or mosques in anticipation of breaking their fast.  In true Ramadan tradition, an offering of dates are passed around, along with water. When at home, I’d keep an eager ear out for those first notes calling out “Allahu Akbar…”, and microseconds later would bite into my favorite: a sumptuous, glossy medjool date – or two… Relishing the sticky, caramel-like taste. Its intense richness would thankfully stop me from further sugar overload. 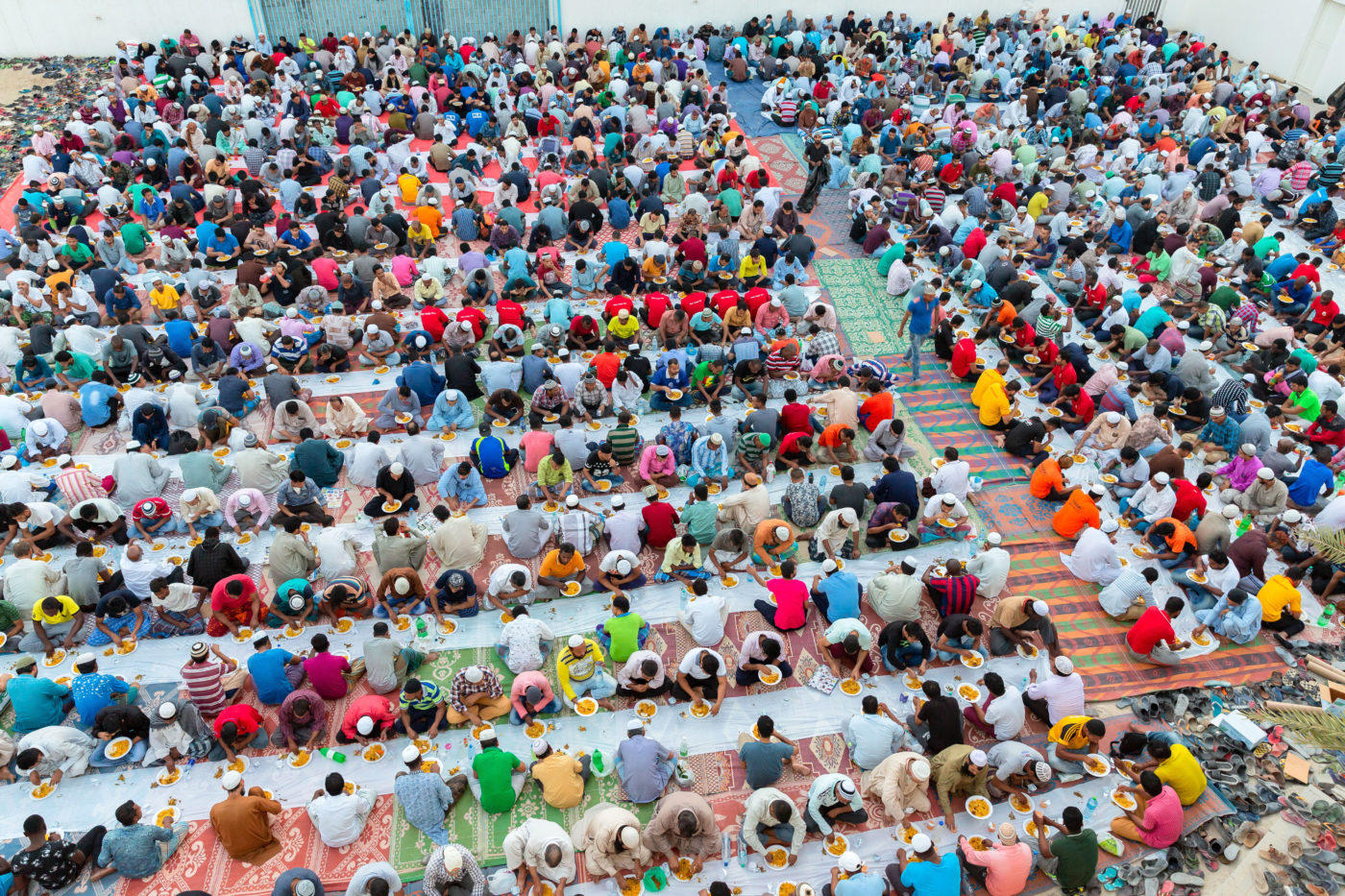 A gathering of 1,500 laborers which Team Iftar volunteers fed 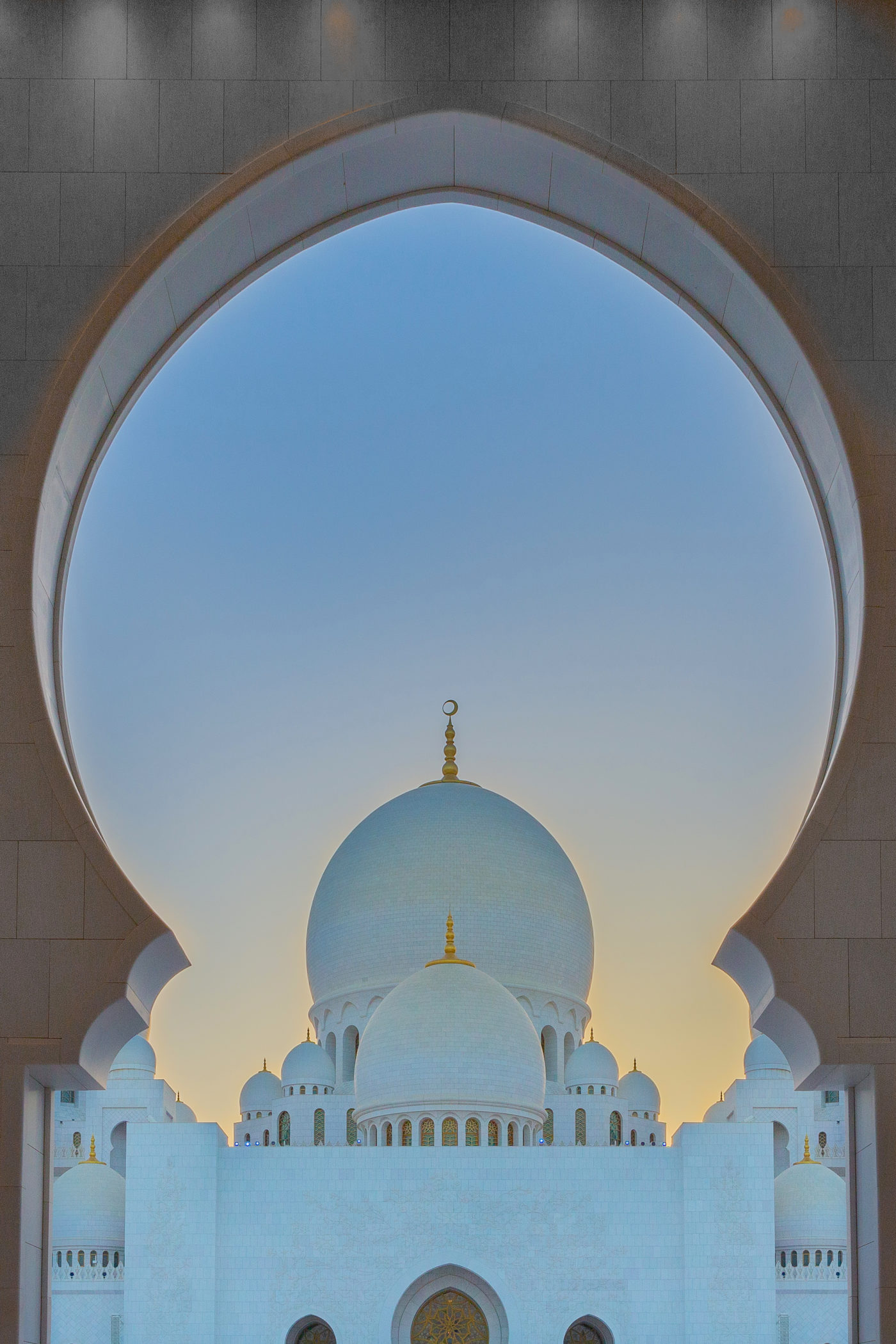 My enquiries to visit mosques were welcomed with invitations to join Iftars (the nightly meal gatherings after breaking the daily fast which happens straight after Maghrib, the sunset prayer). Family, friends and colleagues join each evening – in homes, restaurants, outside mosques, lining entire pavements on streets, and extravagant private gatherings in hotels across the UAE.  We are informed about the benefits of fasting for our health, however I feel the daily indulgences at endless Iftars seemed to make that a bit redundant. It’s such an important time – aside from prayer – where all gatherings are centered around food, so it can be difficult to find a balance. I enforced my willpower and resisted the ubiquitous temptations for the most part.

Host to the single biggest Iftar in the UAE, the majestic Sheikh Zayed Grand Mosque in Abu Dhabi welcomed an astounding average of 30,000 people per evening. Year-on-year they provide impressive catering of generous Iftar boxes including the staple, chicken biryani, fruit, dates, salad, juice, laban and water, and the subsequent set-up and pack-down service in record timing each day. One could easily predict the number of dinner guests would have edged closer to a million this year, if it had not been thwarted by the coronavirus stopping global events in their tracks.

Seeing it is a magnificent spiritual experience unto itself. The iconic mosque has become renowned for being a

(continued on next page) 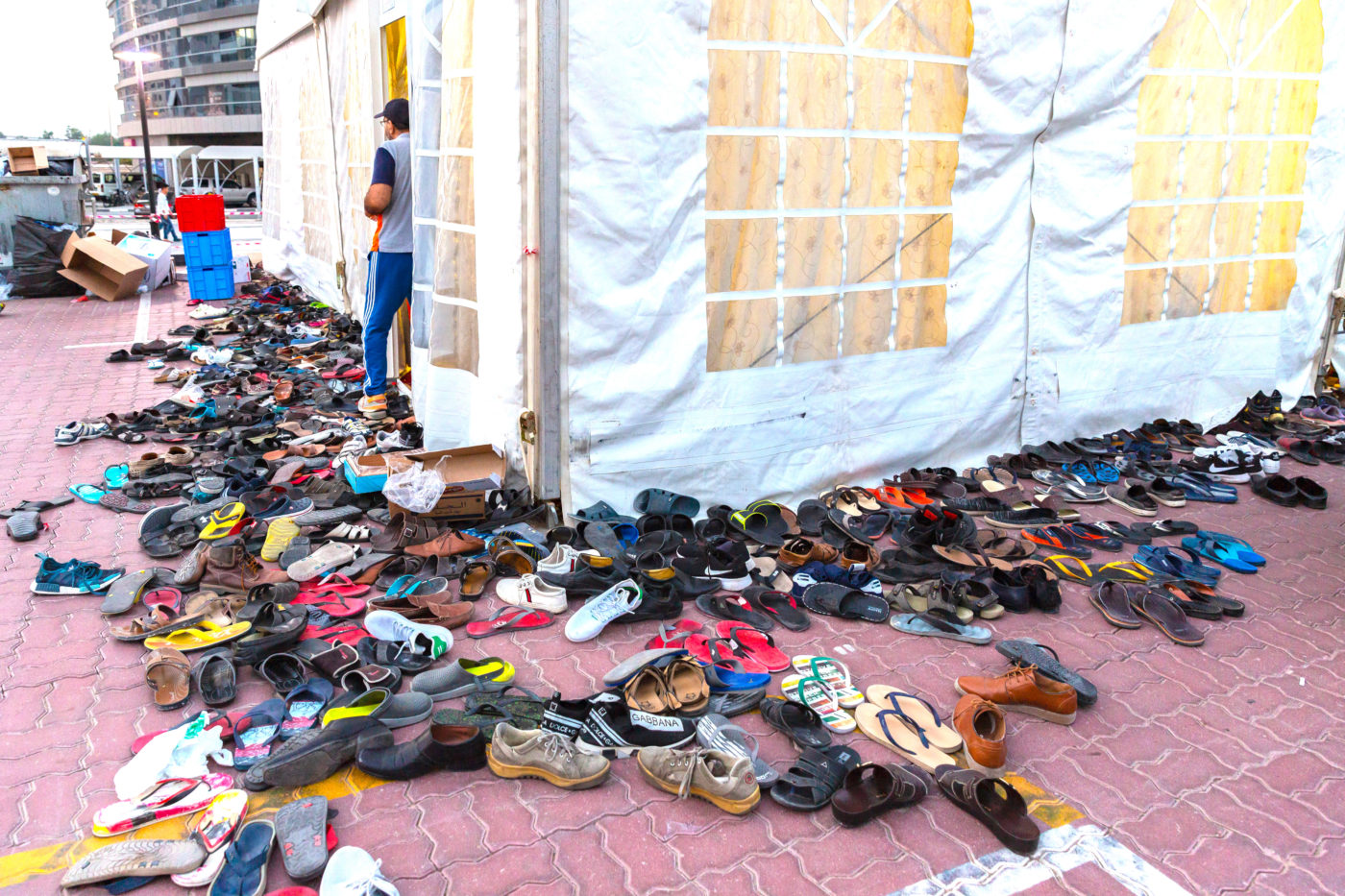 Shoes outside an Iftar dining tent 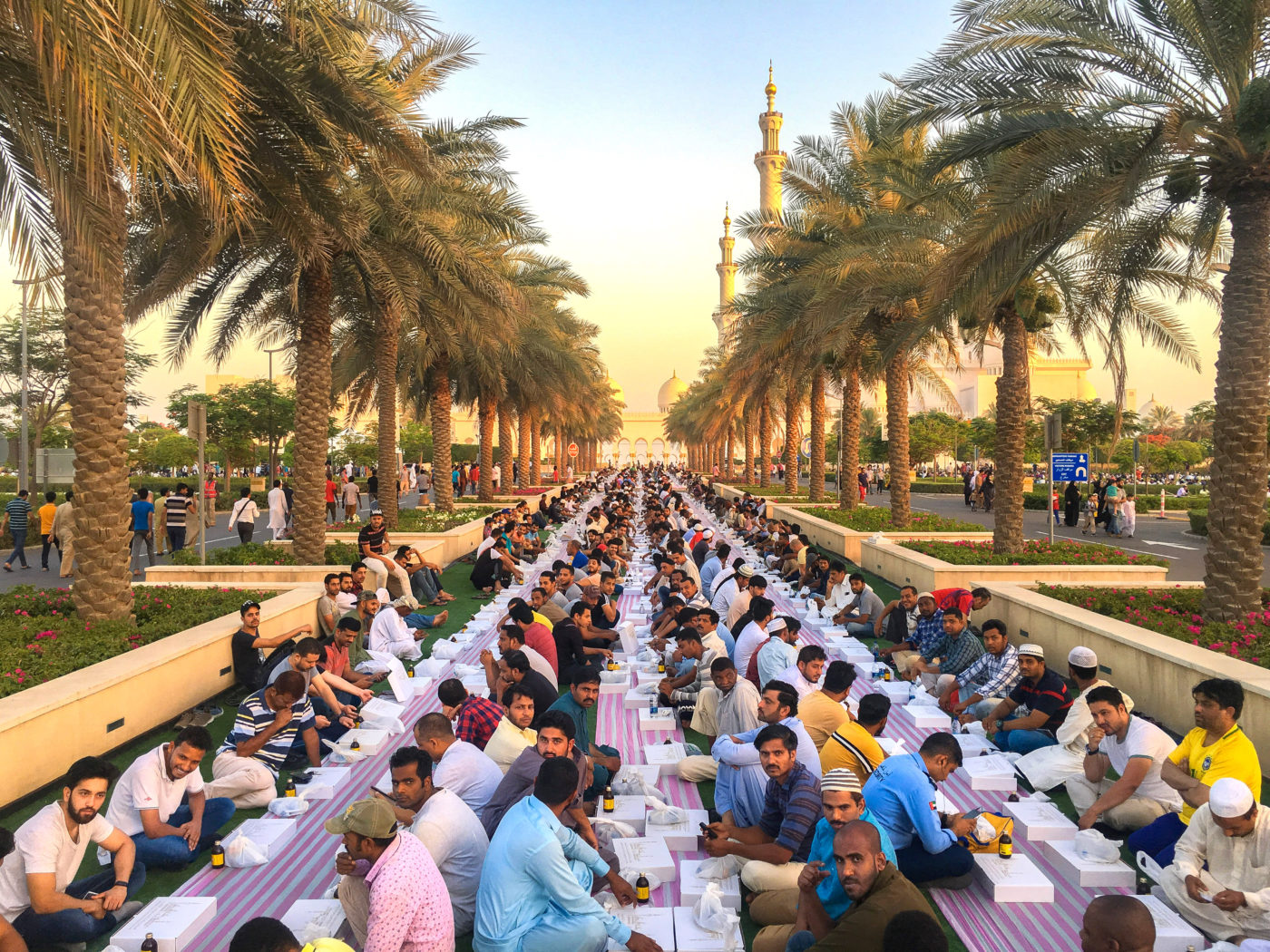 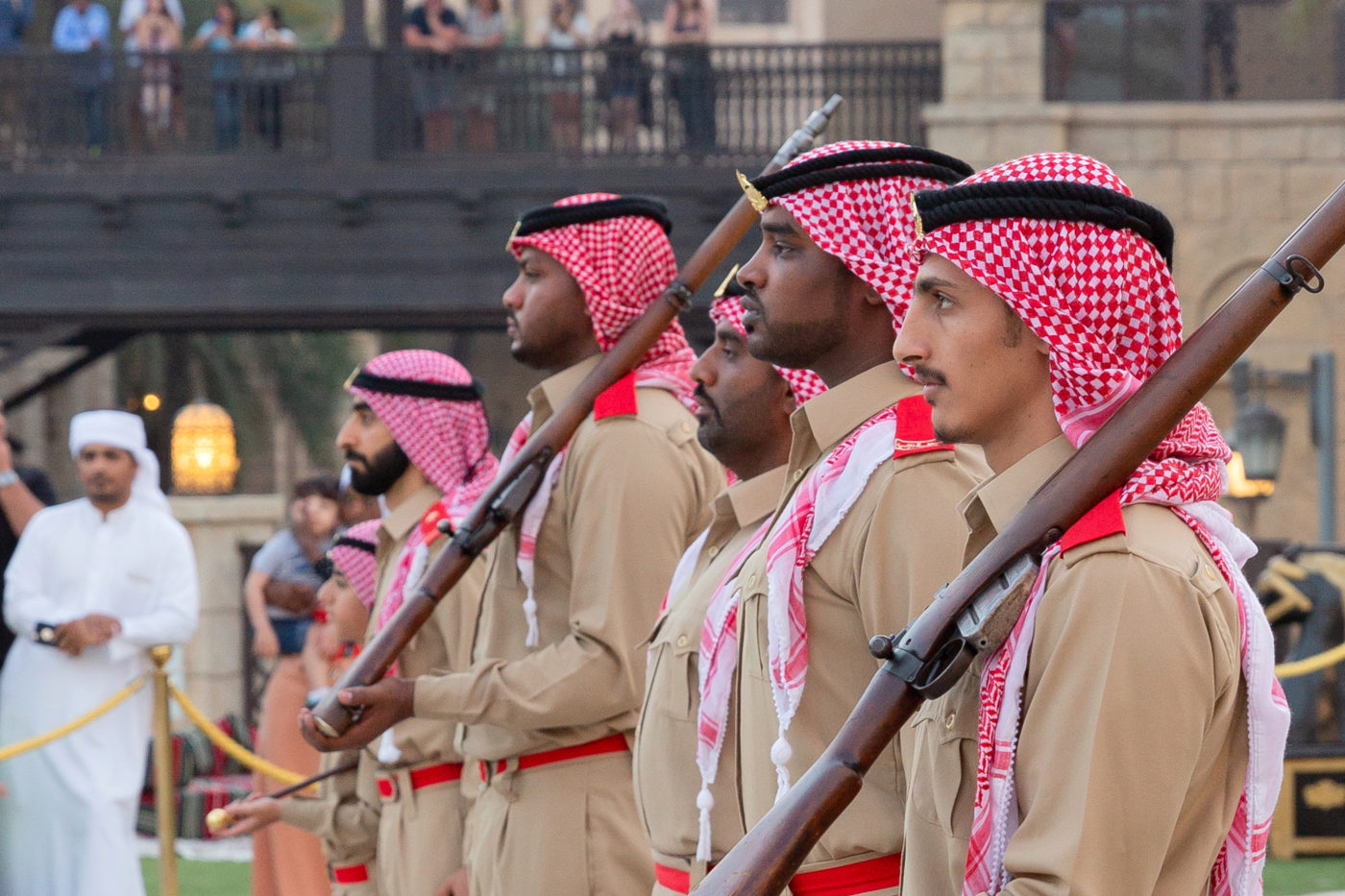 Dubai police during a canon firing at Madinat Jumeirah

Who wouldn’t want to take Maserati’s new off-road vehicles into the desert in the Emirates, and be feted like royalty? We’re in!

The best new hotels, resorts, museums and other wonders

Lanny Cordola started a music school for girls in Kabul. Then the Taliban returned, the school shut, the girls hid and he left. This is how he remembers the city