When I was a little girl, I got all dressed up with little patent leather shoes, a bright frilly dress, attached bows to the ends of my blonde braids and my mother took me to afternoon high tea at the Fairmont Copley Plaza Hotel in Boston. (I actually got all dressed up pretty much every day — the clothes horse tendencies started early.) I remember simply knowing this was something very special and paid particular attention to my posture and tried not to talk too loudly — you know, like the “proper” English girls I’d seen in movies.

The tea came first, and being from a family of certifiable tea addicts, I prepped and drank it exactly as we did at home, with milk and sugar, only as a requisite for the real treats to follow. When the glorious tower of afternoon delights finally arrived, I essentially lost my mind in tasting every single thing they brought, a practice my mother wholly approved of, working my tiny fingers excitedly and as politely as possibly down the China-plated tiers.

Since that day, my tastes haven’t changed much. The star was the scones and clotted cream which, if my metabolism and food sensitivities would allow, I’d basically turn into my day job. I didn’t care much for most of the sandwiches and still don’t: ham and cheese, tuna, egg salad, salmon with cream cheese. But the coup de gras, the death blow that delivered me to tea sandwich nirvana, was the cucumber sandwich, the perfect blend of crisp, refreshing veggies squashed between cream cheese, flavored with just the right amount of fresh herbs to make you cry with enchantment.

In my opinion, they are one of the best things to come out of the Victorian era. I’m told one of the most English ways to make them is with bread, butter (not cream cheese) and cucumbers. There are certainly many different ways to make these, so I’m going to share with you today my favorite quick and dirty recipe.

A loaf of shameless white bread 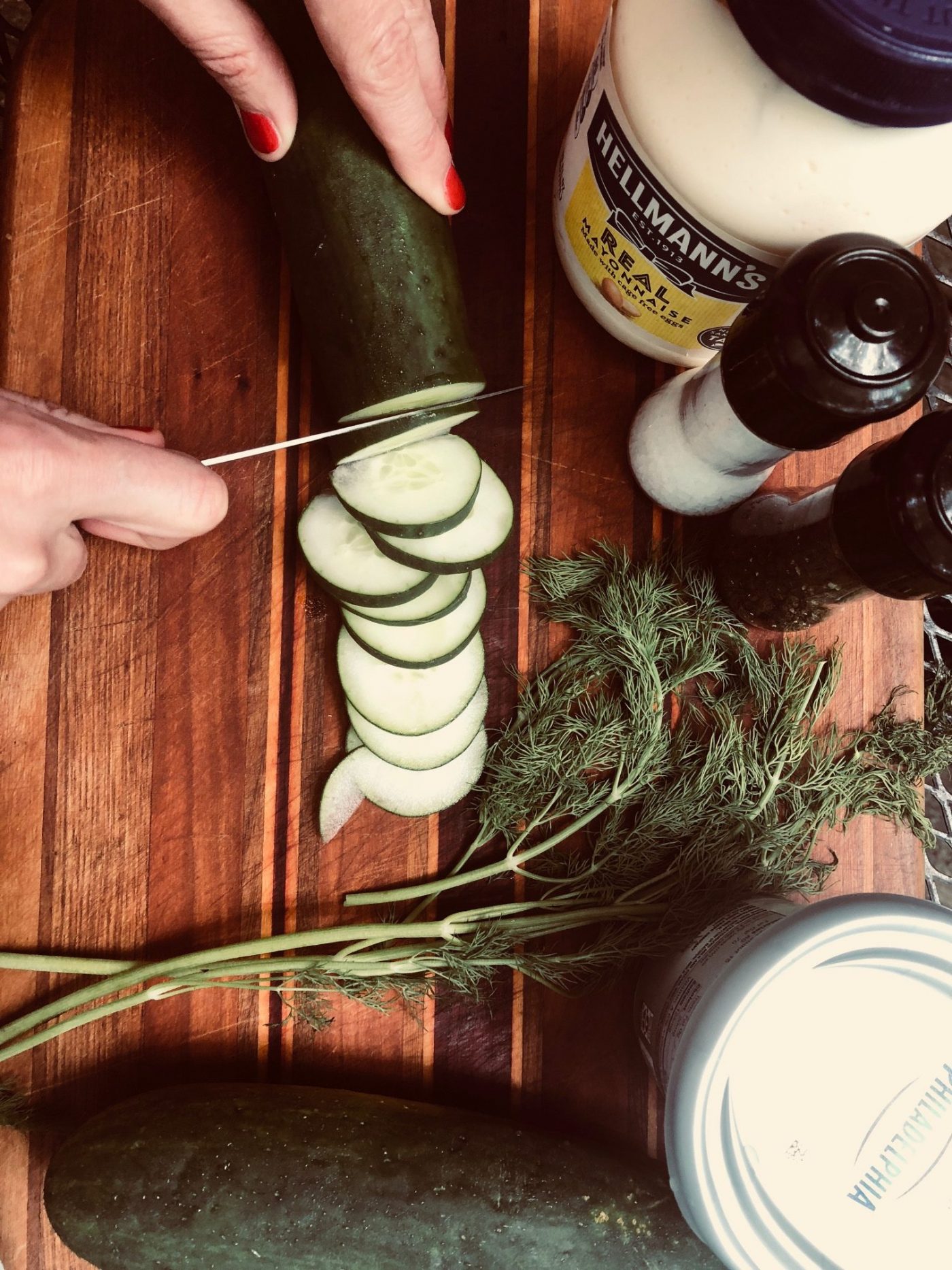 Cut the cucumbers into super-thin slices. In general, thin is the most traditional way, though in our house it’s often requested I make the cucumbers a bit thicker. By all means, customize.

Dry out your cucumbers by placing them between two paper towels and under something heavy, like your favorite Shakespeare anthology. 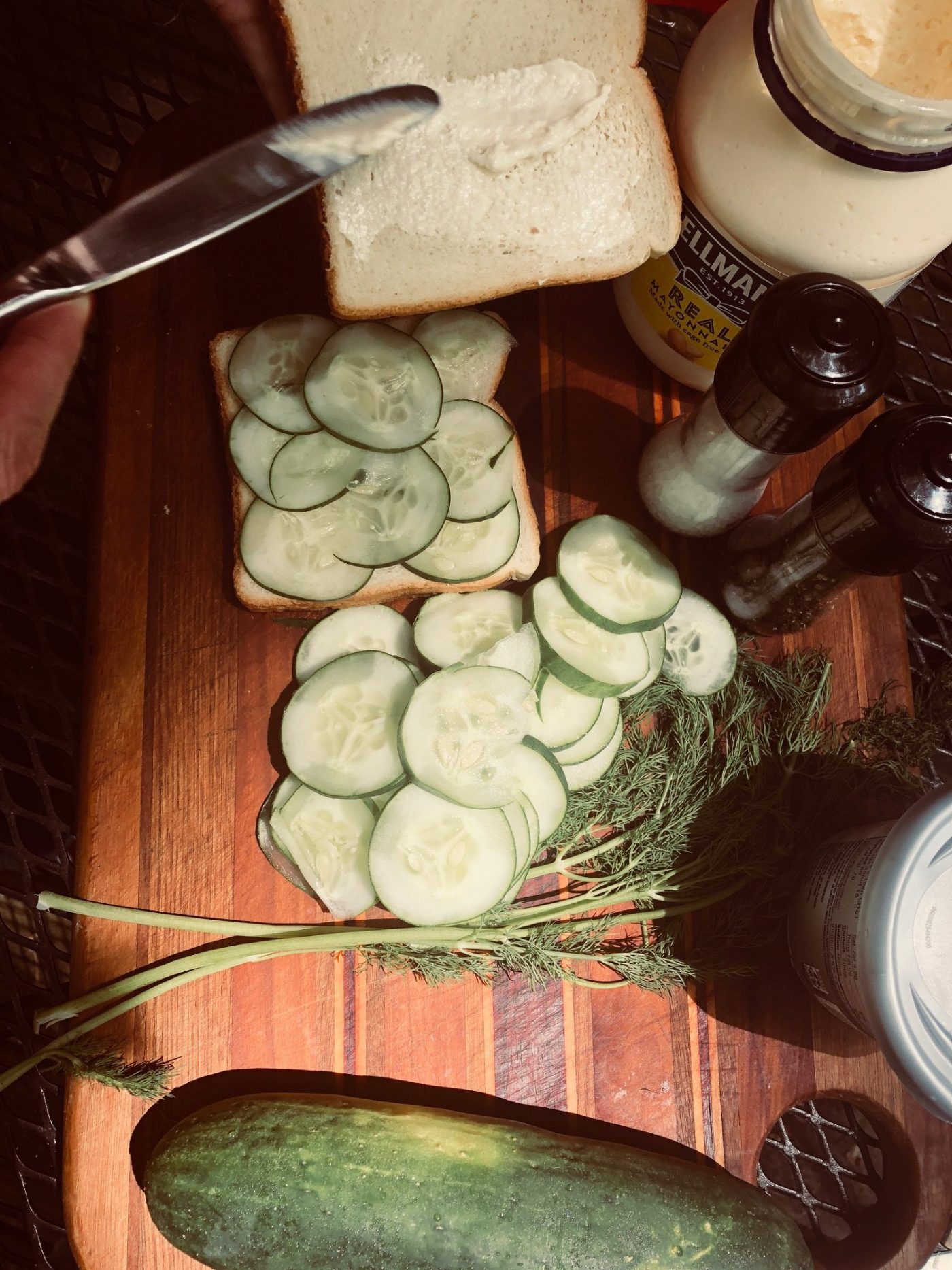 Spread a very light layer of mayonnaise on one side of the bread. Most recipes call for mixing the mayo, cream cheese and herbs and spices all together first, but I don’t do it that way — and not just because I’m a modern traditionalist. Reason is, I’m usually not going on an actual picnic, but rather making something quick for a party of two between conference calls, and we’re simply not sure how much we’ll want to eat. Besides, I told you this was quick and dirty, right? How can you be quick and dirty with all that pesky measuring?

Spread a light-ish layer of cream cheese over the mayo. (Trust me. It’ll all work out in the end.) 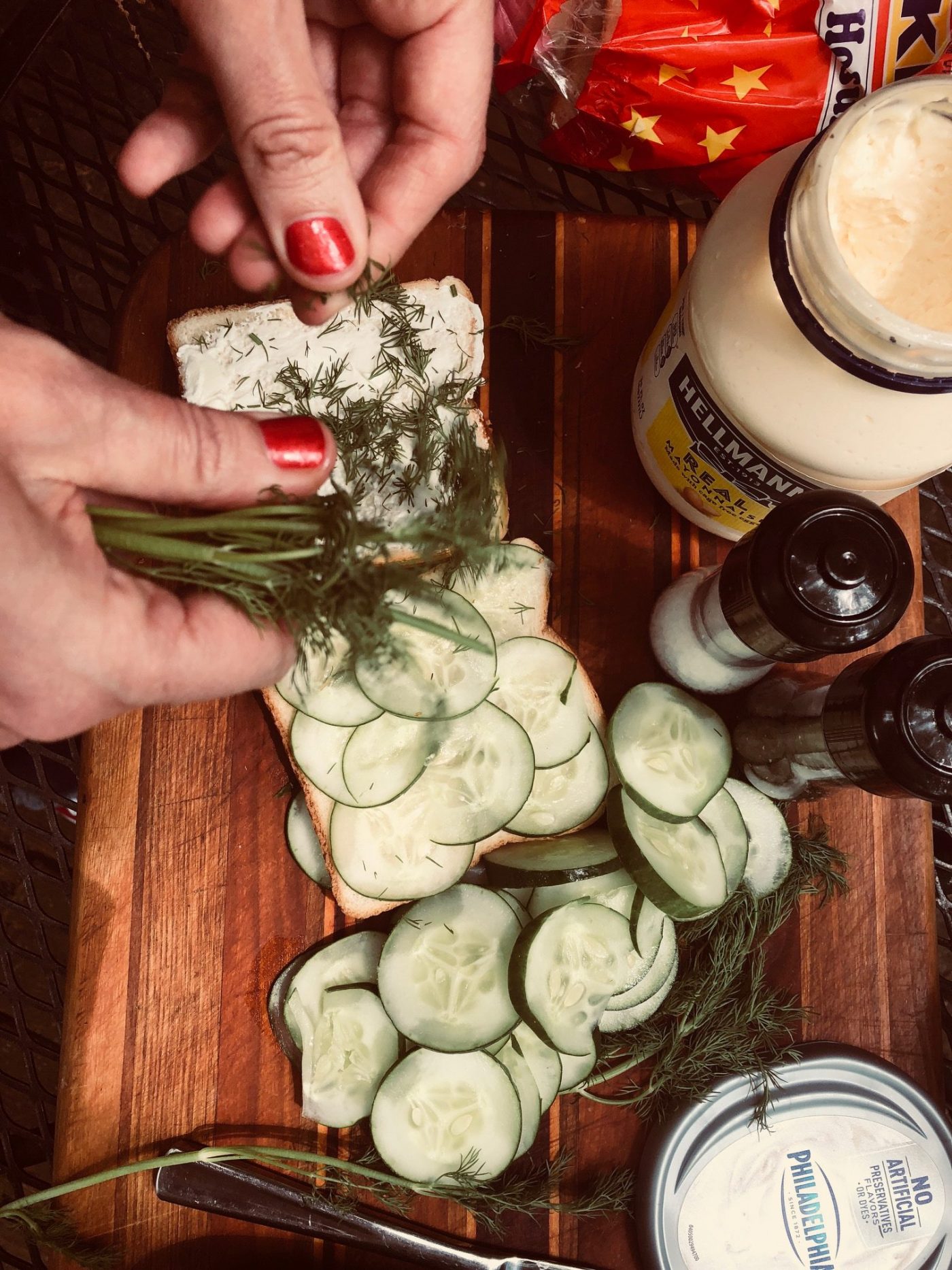 Sprinkle fresh dill all over the cream cheese. You don’t want to overdo it, but create a nice, judicious dusting. I generally cut the dill with kitchen scissors right over the bread. (Hashtag: keeping it real.) I also add a little dash of salt and pepper here. You can also dust both sides carefully with garlic and onion powder. (Note: If you’re like my partner in crime and don’t like dill, your favorite herb mixture will do just fine.)

Lastly, close up your sandwich and cut the crusts off. You can chop the sandwich twice on the diagonal, if you want to look super fancy. 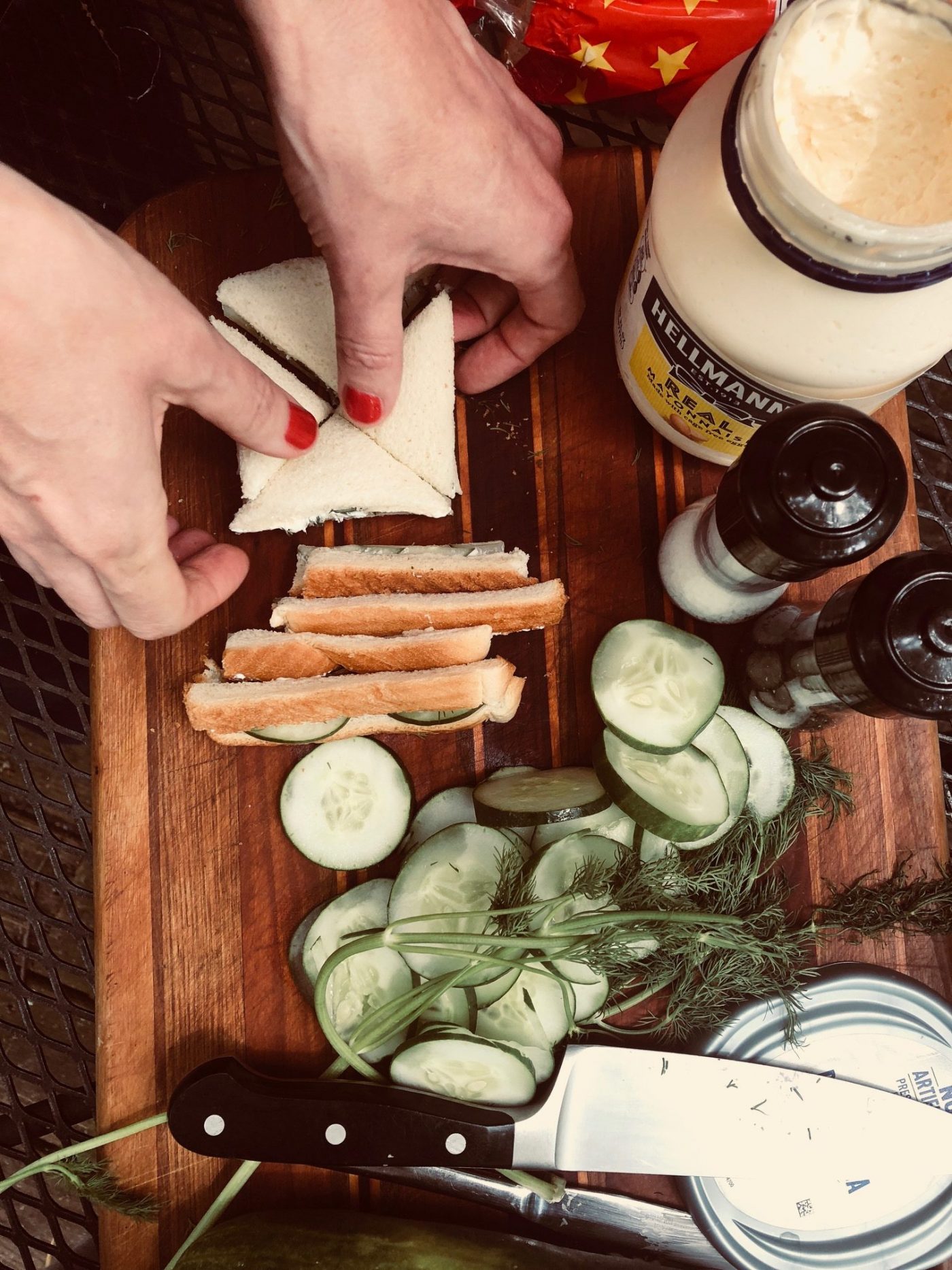 Cheers, enjoy and happy eating! Thanks to cucumber sandwiches, at least some girlhood dreams come true!