Since her death on September 18, 2020, I have often felt gratitude that Ruth Bader Ginsburg was spared the catastrophic atrocities we have witnessed leading up to, and since, the inauguration of Joseph R. Biden as the 46th President of the United States. Justice Ginsburg was formidable; there was nothing but death itself that could have brought her down but I believe the attempted coup at the Capitol on January 6 would have broken her heart. Instead, she died on the eve of Rosh Hashanah, the “Days of Awe,” marking the Jewish New Year. The significance inspires awe. It is perfect. In the Jewish tradition it is believed those who die on this day, one of the two most High Holy Days, are the righteous ones, the ones who were needed right up until the very end of the year. There is a Hebrew title bestowed on them––”tzadik.” It means righteous and saintly.

To tamp down the nightmarish imaginings of Ginsburg witnessing all that has transpired in these long few months, I thought I could instead focus on this memory of the morning I spent with Tzadik Ginsburg…

Once upon a time, when I was a young woman, I got to meet a tiny giant.

It was the fall of 1997. Timothy Greenfield-Sanders was on assignment to photograph Ruth Bader Ginsburg for the cover of The New York Times Magazine. I travelled with him from NY to see to her makeup. We arrived, gear in hand, at One First Street NE, Washington, DC, home of the United States Supreme Court. The magnitude of meeting one of the most important feminist icons of my lifetime hadn’t hit me yet but as we made our way down the hall towards Ginsburg’s chambers, it finally did. The weight of every decision ever made in that august building was as palpable as the weight of the imposing columns that stand guard as one ascends its steps.

But I had a job to do and couldn’t afford to get lost. I hurried after Timothy and, somewhere between gawking and trying to remember to close my mouth, I spotted a loveseat. It was perfect. “Timothy, look at this,” I whispered (the halls of The Supreme Court will do that to you). “You’ve got to photograph her in this loveseat. Look at it. It’s going to look like a really big chair. Imagine that little frame sitting in such a massive chair? She’ll look like Alice in Wonderland.”

I could see the storybook version of her, a tiny giant of a girl, but unlike Alice, Ruth didn’t fall and fall without purpose. She flew deliberately into the rabbit hole, on the wings of jurisprudence, clear in her purpose and knowing precisely what she wanted to do. I believe every action she took towards that purpose was a sacred one and she never wavered. Many tried to stop her but Ruth Bader Ginsburg was unstoppable.

I am gutted she is no longer with us. The world is a lesser place for it but I am filled with gratitude for the immense cache of treasures she bequeathed us, all of us. My heart is full, too, for the blessings Ginsburg had in her own life: purpose beyond anything I could dream of; passion for the law and the patience to work tirelessly as one of its shepherds; marriage to a man she loved dearly, a man who loved her in kind, but more importantly, respected her as few men have ever respected their wives, let alone women in general; a family she adored; and opera, for which she reserved a huge part of her heart and was the only vehicle of transport from the profound considerations of law to the purity of music — for Ginsburg, a place of tranquility and transcendence. 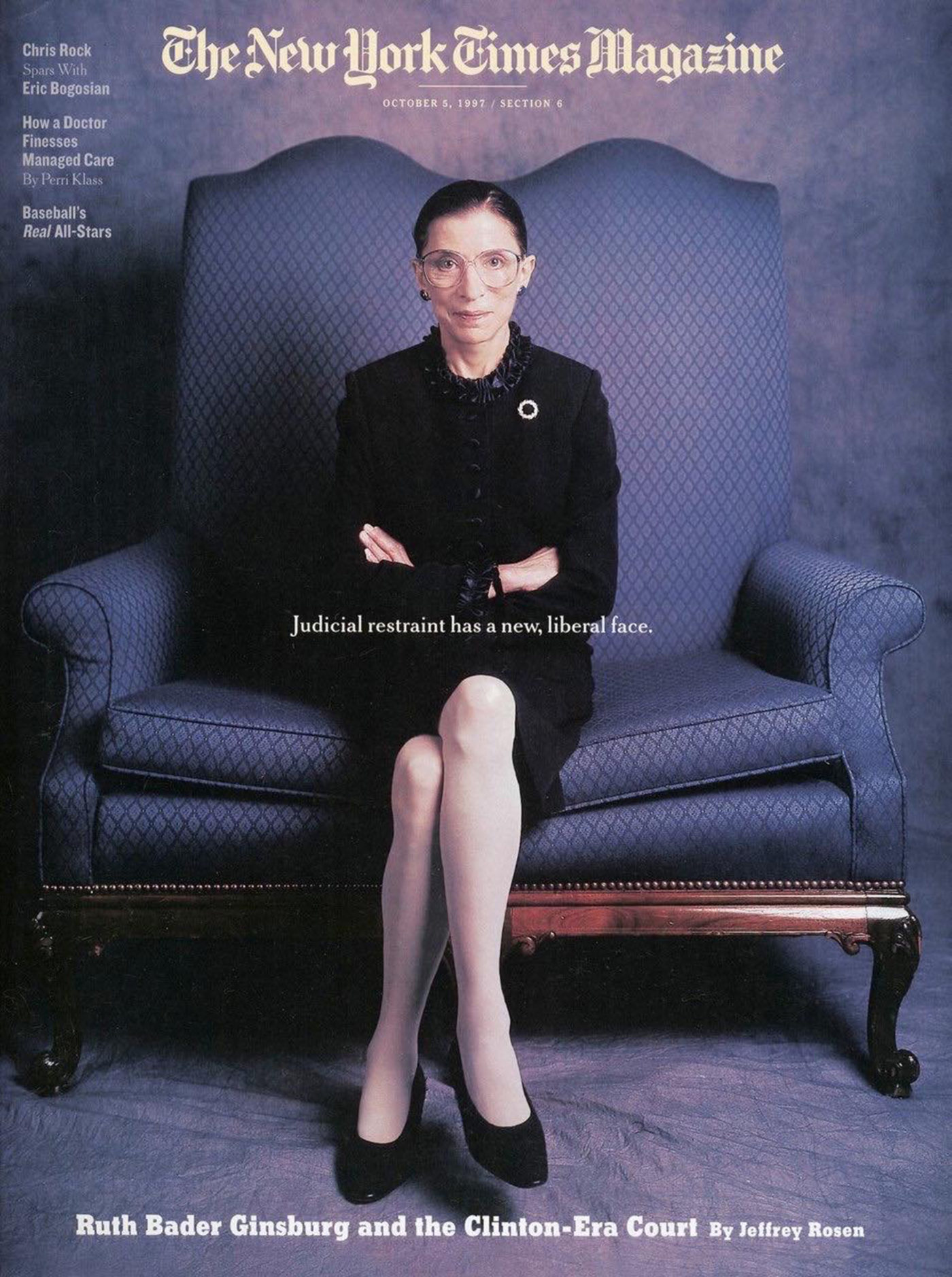 We met the good Justice in her chambers. It was clear we were taking time away from her work. She was not gruff or disrespectful, simply passive in her resignation. Her focus was elsewhere. My work that day was minimal, to make sure her face wasn’t shiny and her lips were defined and neutral. Her skin was as soft as Nicole Kidman’s and as flawless. I didn’t need to do a thing to it. While Timothy spoke with Ginsburg, I had time to take in the mementos that filled the room. In any other office it might have felt cluttered but in Ruth’s room there was an order that was comforting. I imagined her brain being like that, filled to capacity with row after row of well cataloged details. The arias had their shelves, as did case law or the many presents for a grandchild or the law clerks she was known to treat as family. Dozens of shelves held words, billions of them, the importance of them, written by so many who had come before her and the words she, herself, took such care to write because they would affect generations. As I imagined her palatial brain library, it made sense Ginsburg’s chambers would have such a bounty of personal artifacts without feeling cramped or rigid. On the contrary, it was inviting, alive and serene.

Nor was it surprising that the vessel for that dazzling brain was so much like her chambers. Ginsburg’s essence remained measured and contained, even though it was filled to the brim with knowledge and the fire of purpose. As a jurist, she was bound, as much by her own decorum, as that of the Court’s, but one could feel the heat in her dissents, the joy in her majority opinions. We got to see her personality and style in the bold earrings she chose and the now famous lace and beaded jabots she used as adornment for the somber, black robes of the Court. One might say Ruth Bader Ginsburg was a style hound. Her beautifully made suits and gowns were classic in silhouette yet fully loaded with panache — an exquisite, little, Elizabethan ruff-like collar on a jacket (as she wore that day), striking colors, stunningly embroidered suits from China or Korea. She liked sparkle and gold. She wore red. We could love the bold elegance of her style because it was contained. There was no chance it came from chaos. We could trust her to tell us the truth because she was true to herself. She didn’t lie in her containment and she didn’t lie in her exuberance. She was the grownup in the room. Her chambers felt like the safest room in the world.

Her life story was in that office and I was humbled and amazed to have tumbled into it. As my attention wandered about the room, I noticed a photograph. For a moment it didn’t register. I walked over to get a better look and there was Ginsburg wearing an eighteenth century wig. I blurted out, “Justice Ginsburg, you’re wearing an eighteenth century wig.” I know, the wit is staggering, but I was starstruck. I can’t remember if she said it was from an opera gala or one of the times she performed as a super (opera speak for extra) but she asked me if I liked opera. I told her I had designed several operas and they were always my favorite jobs. Her face beamed and then it happened. She looked straight into my eyes, saw me, and invited me into the opera corner of her brain palace and we talked about why we loved opera.

The thing I loved most about opera wasn’t the music, although I could be found in the wings silently weeping at some passage or another. It was the singers I loved. Working with them is what brought me so much joy. In thinking about Ginsburg, it occurs to me that what I find glorious about opera singers are the very qualities I believe she shared with them. By and large, they are deeply respectful of others. They love humor, often the corniest kind. There is a humility I rarely encounter in other performers which I believe comes from the dedication it takes for a singer to create a career in that world. Years of never ending work to gain admission into a world that might as well have doors as formidable as the thirteen ton, bronze doors of The Supreme Court building, itself. This rare breed of performer must persevere and work hard. There isn’t time for pettiness or fame obsession. They sing. And sing. And sing some more. Those who survive, like their most ardent fan, never give up. Most who begin the journey cannot sustain the demand but for Ruth Bader Ginsburg and the singers she, too, loved greatly, there was and is no other choice.

It couldn’t have been five minutes I spent in the rarified air of Ruth’s love for opera but, for those minutes, her eyes were bright and the urgency to get on with the necessary task of being photographed, was absent. Get on we must, though.

In one of the grand conference rooms, equipment had been set up with backdrop, lights, and a 20×24 Polaroid Camera, the largest format cameras still in use. Only five of them were ever made. The setup was as grand as the room in which Timothy was shooting and there, in front of the backdrop, was the loveseat. When she settled into it and crossed her legs, it was stunning and another blurt flew out of my mouth, “Girl, you got some serious gams going on there.” The smile started with her eyes. It reflected back my delight in the moment. When it reached the corners of her mouth, her smile told me she knew she had great legs, she knew I knew that she liked having great legs, and it wasn’t the first time she’d been told how spectacular they were. For a second or maybe two, we were two women sharing a ‘girl’ moment. I half expected her to wink.

Ruth Bader Ginsburg was, and will be, many different women for millions of people and for history’s record, as well. For me, she will always be the giant who invited me to step into the magnificent opera that was once America’s Wonderland.

Wonderfully, like spring shoots poking through the ground, new places are opening up 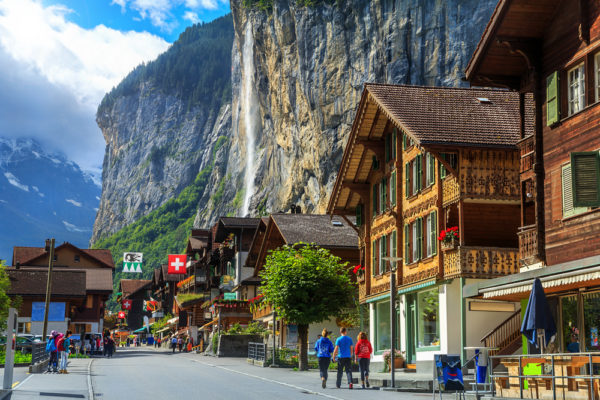 There's more than just mountains! Switzerland is back, baby!