The James Bond cinematic installation 007 ELEMENTS, in Sölden in the Austrian Ötztal Alps is mostly inside the top of a mountain. Fans of Bond’s 24th film Spectre will recognize the spectacular, snowy location of the futuristic hospital, the Hoffler Klinik, where Bond first meets the sultry Léa Seydoux. The scene is set in the converted large glass ice Q restaurant on top of the world where there are 250 mountain peaks over 9,800 feet high.

Sölden was the location for the eighth Bond film where he appears in the snow. Handy, as there are almost ninety miles of ski-runs for the crazy car and other chase scenes. We recommend you use skis instead.

I spoke to Bond movie Art Director Neal Callow, who shot there in early 2015. Neal has art directed four James Bond movies so far and worked on No Time To Die. 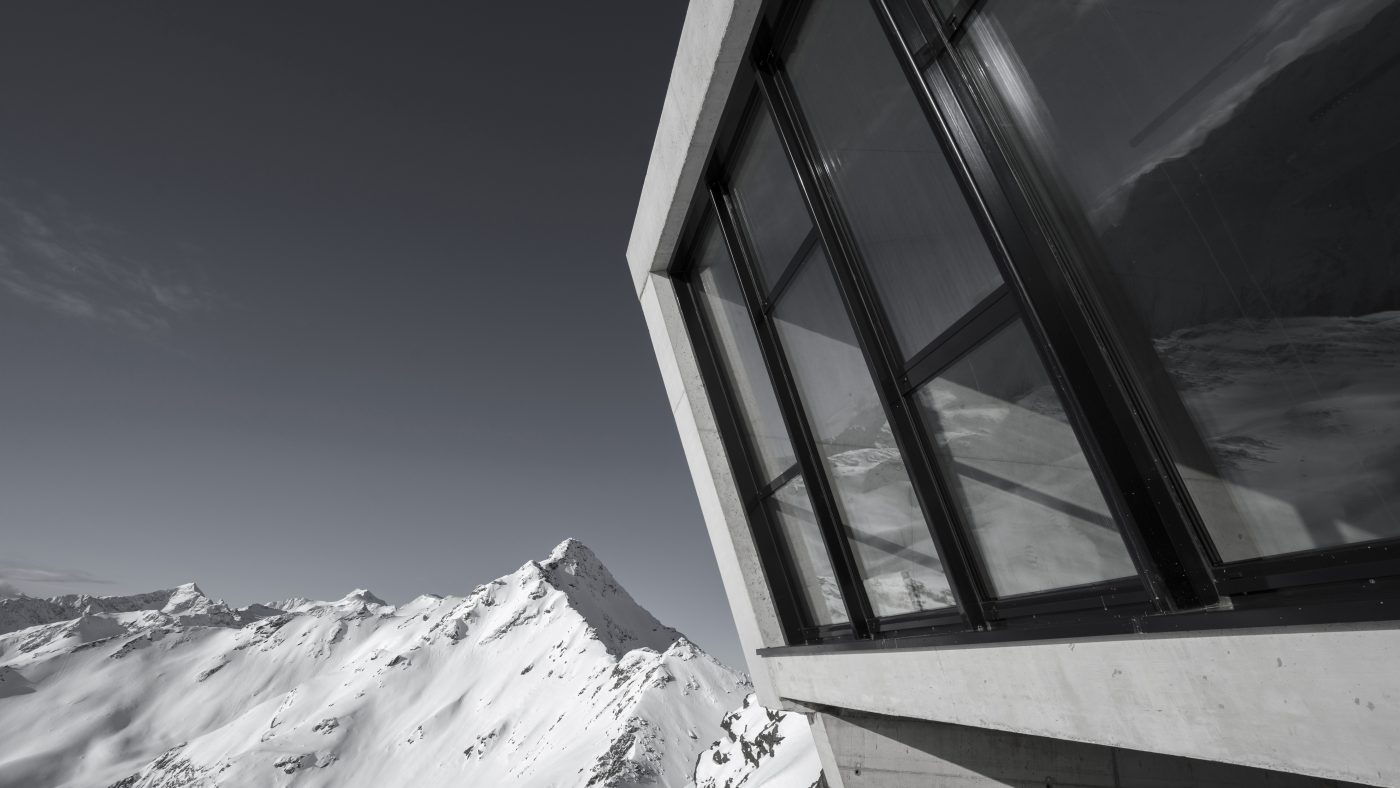 He is also the Creative Director on the 007 Elements project, which became an expansion of the Hoffler Klinik set in Spectre. You enter through a doorway cut into the rock, through a concrete entrance tunnel and into the mountain, no doubt with Shirley Bassey singing “Goldfinger” in your head. Which had nothing to do with this by the way.

Well a little bit: the nine chambers within the mountain explore the legacy of the making of 007 movies but most specifically focus on Spectre. Large framed windows look out over the stunning Ötztal Alps and the locations used.

Neal told me, “between the three of us, including architect Johann Obermoser and Tino Schaedler, head of design at Optimist Inc. we did a very unique job. There had to be environmental studies and the mountain’s ecology factored in. We had to do due diligence…”

For instance the building is stabilised at one degree C, so as not to affect the permafrost. “Once it was greenlit, we built the building like a James Bond environment, (in concrete, steel and glass) which puts visitors inside the world of 007. It’s a sequence of spaces, a multi-sensory cinematic experience along with interactive 007 Elements. Cinematic spaces that go from dark to light, movement between light and shadow.”

He told me that the content inside will be updated over time. “Huge items can come out of a large hatch that opens up in the roof.  There’s an airplane in there now.”

Unlike in the movie, you cannot drive up there. The Land Rovers and Range Rovers in the car chase scenes were towed up the mountain by snowmobiles (and had 1500 studs in each tire), so you’ll have to take the cable car. Sorry. Even Daniel Craig had to. It’s fabulous, we assure you. 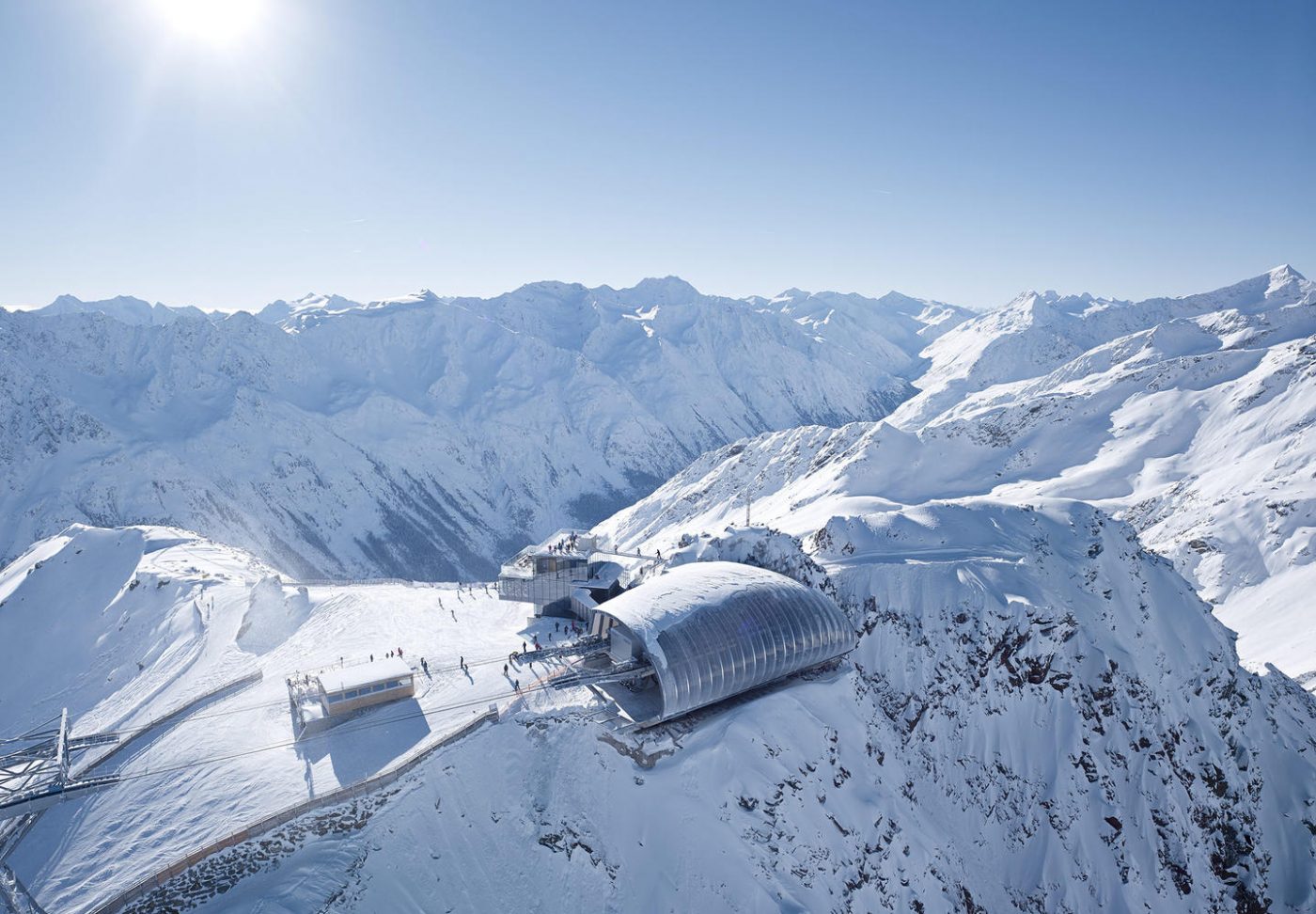 ice Q cable car. Obviously this was taken in the winter months

The cable car runs year-round and as this is the Austrian Tyrol, the mountain sides are covered in rustic mountain huts, and restaurants around the ski areas. Drinking a gluhwein (hot mulled wine) and skiing between them is a lot of fun during winter season. During the summer months there’s mountain biking and hiking through incredible, stunning scenery.

The Gaislachkoglbahn (don’t ask me…) Gondola cable car from the village of Sölden is open from 9 a.m. to 3:30 p.m. daily.

The gourmet restaurant and ice Q Bistro and Lounge are open daily from 9 a.m. to 4 p.m.

From late December ice Q will be open every Wednesday evening, but only for three months and you don’t need to be a spy to get in — just call and book a table.

Neal’s a fan. “They’re fantastic restaurants, have an amazing wine cellar, really good spots. People can go to the ice Q have a drink first and then go to the museum and go back afterwards to eat. They’re adjacent buildings, there’s actually a connecting bridge so people can avoid the snow.”

Besides visiting 007 ELEMENTS, there’s plenty else to do. Neal recommends Wein am Berg, one of the best-known wine and gourmet festivals in Austria. in April gourmets and wine connoisseurs from across the globe meet to celebrate food and wine.

“Solden is where the Alpine Ski World Cup opening is held…  it’s big for snowboarding. They also do Hannibal,” a tremendous outdoor theatrical ice show, played out on a floodlit mountain side.

There are loads of fantastic places to stay. Das Central Hotel in the middle of Sölden, is a beautiful hotel with amazing food. Everything you’d expect in Austria, according to Neal. (It’s a luxury spa, too.) 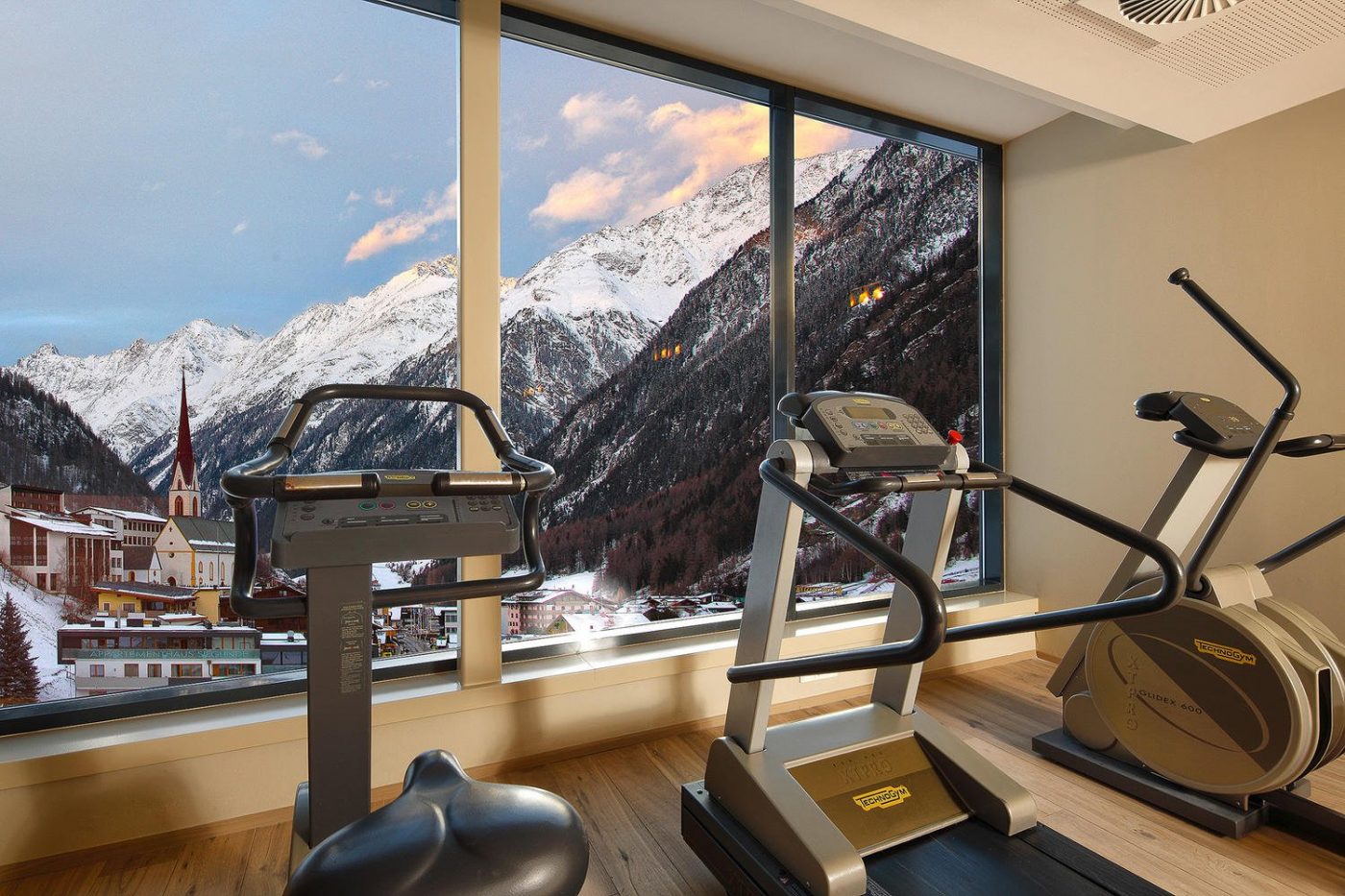 You may stay in Bergland Hotel’s fitness room all day 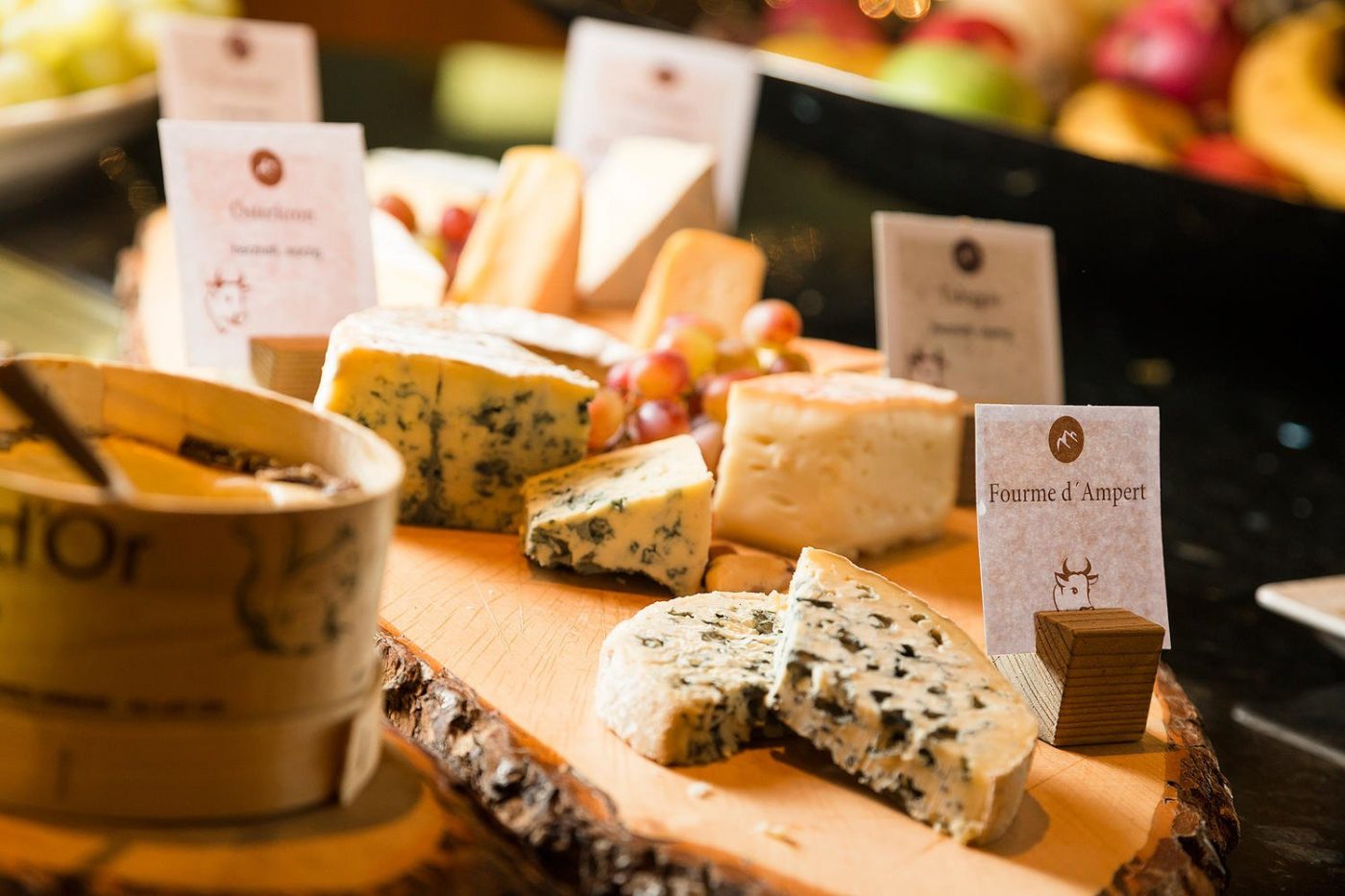 Which is good for you, because they have lots of cheese at the hotel

The Bergland Hotel is also a beautiful hotel and spa.

The Aqua Dome, in a village 15 minutes away down the valley from Sölden, is a giant thermal spa that has different-temperature outdoor hot tubs, pools, water slides. It’s massive, with every kind of massage and steam room, and also a hotel (with childcare — we love that).

007 Elements will be open year round. 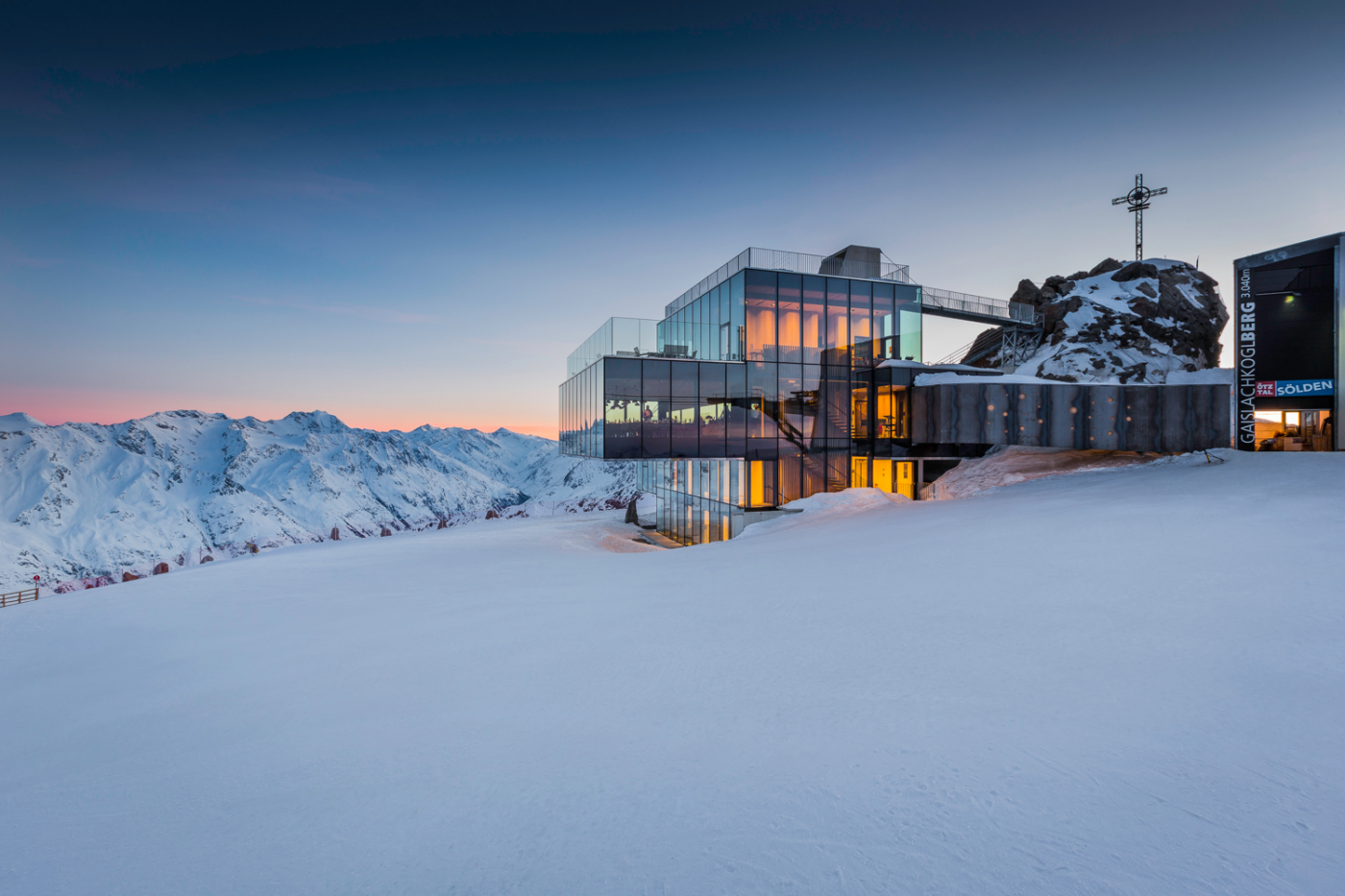 How to get there  (Why do you need to ask? What kind of spy are you? Do you think James Bond asks M for directions?)

Fly into Innsbruck, Austria – it’s around a one hour drive to Sölden.

From Munich, Germany, it’s a two and a half hour drive.

If you can’t make it to Austria but need a spy fix (and who doesn’t!) you can visit:

Besides hosting an incredible exhibit Exquisitely Evil: 50 Years of Bond Villains, it has the largest collection of international espionage artifacts in public display. And you can have your birthday party there.

$39 adult entry, $32 child. So for seven dollars, it’s worth pretending that you are just an extraordinary large child. There are online offers to be had, so it’s worth looking around.

Now Berlin knew spies! Located in Potsdamer, Platz in the center of Berlin, since 2015, with more than 1000 exhibits from years of espionage, from spying in ancient bible history to present day, set in a 32,000 sq ft space — including a laser labyrinth. (Wear sneakers to up your chances of survival.)

Standard entry is approximately $14 with concessions for students or groups. Children under 6 are free.

There are eavesdropping devices, lie detector tests and a pitch dark espionage tunnel plus you can have an agent test how adept you are. If you are too adept they arrest you, interrogate you at a secret rendition locate and possibly murder your loved ones. (No they don’t, we made that last part up.)

Record industry legend Chris Blackwell has a glorious second act as a hotelier, with his Island Outpost Resorts in Jamaica