You already know this, so forgive the recapitulation. Back when Rome ruled the known world in more than just pickpockets, salt was a scarce and highly-sought commodity. It was worth so much that Roman soldiers were commonly paid in salt. This is the origin of our word “salary” (the Latin for “salt” is “sal”). According to Pliny the Elder, anyway, so take that for what it’s worth. You know, with a grain of salt.

If you were an ancient Roman soldier, upon encountering the Palacio de Sal in Bolivia, you’d probably think you’d stumbled into El Dorado. Palacio de Sal bills itself as “the world’s first salt hotel.” There are in fact other salt hotels, but they are all (or maybe just both, it’s unclear) located in the same area of Bolivia, the Grand Salar de Uyuni, a 4,633-square-kilometer salt flat that exists at a height of nearly 10,000 feet. Apparently you can see the Grand Salar from space, but having never been to space I can neither confirm nor deny this assertion.

Everything in the Palacio de Sal is made out of salt: the walls, the ceilings, the furniture, the beds, the concierge desk. The concierge is real, though. I would not like to find out that any of the staff are made out of salt, because that would be some kind of biblically-inspired horror movie that Eli Roth would direct and I would not watch.

If you’re planning a trip to this saline paradise, the hotel would like you to bear a couple of things in mind. First, do you have children? Okay, cool. “There are many people that travel with children,” explains the hotel’s charmingly direct website. “The Salar de Uyuni is a 100% natural destination where there are no attractions for children. However, if your children are used to spending many hours sitting on a bus or a car don’t hesitate to bring them along.” Hey, you’re the one who decided to have kids. Don’t blame the Salt Hotel.

Encrusted in salt: But you’ll sleep like a baby!

There is a rainy season from late December to mid-April. Apparently this is called “the season of water reflection,” or, for those unfamiliar with poetry, “the time of the puddles, when the salt bricks of the hotel slowly melt in the rain, but are replaced with new salt bricks, so probably don’t come here then.” Other useful information: “In the Salar de Uyuni area, Uyuni city and around they don’t have a central electrical net, so for this reason sometimes there might be blackouts, randomly and occasionally that can last up 12 hours or more.” On the other hand, they do have free internet. Or at least internet. Although it probably doesn’t work in a blackout. 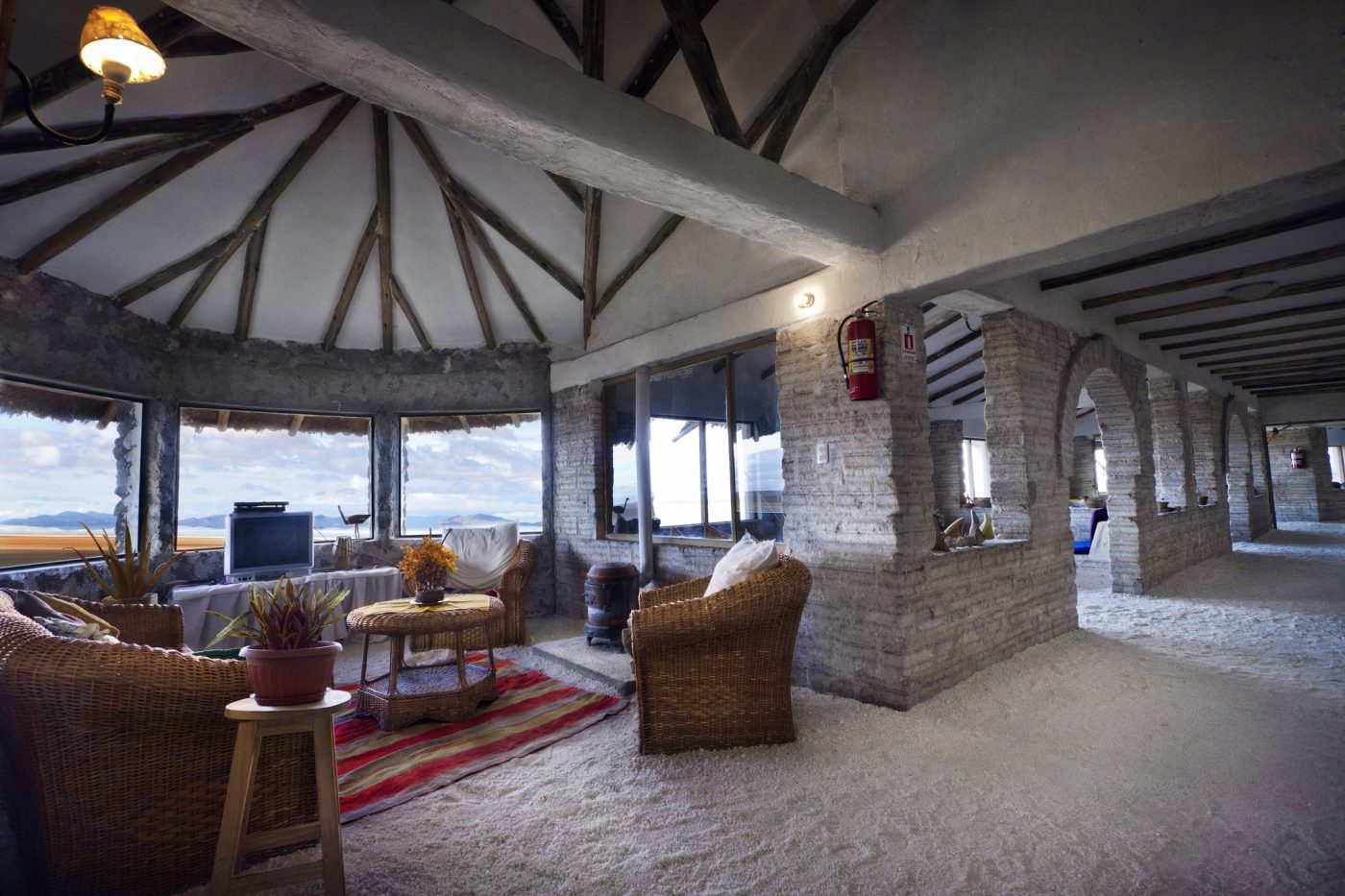 The lobby. And beyond, some very big sky…

But if you’re up for an adventure, and don’t mind a certain amount of inconvenience (“it’s recommended to…drink lots of water and eat little because sometimes digestion is impaired by altitude”) the Palacio de Sal just might be the Palacio de You. Think of the advantages: If your quinoa comes out of the kitchen a little under seasoned, you can just scratch at your table or chair to get all the extra salt you want. When you take a shower, it’s like you’re taking a shower in the ocean! (This is not true. The showers aren’t made out of salt. That would be silly, unlike constructing an entire hotel out of salt.) Okay, maybe don’t think of the advantages. But think of being able to tell your friends that you stayed in a hotel made out of salt! You don’t hear that every day in the checkout line at Whole Foods. Or maybe you do. That place, even their salt, is too expensive for me.

The hotel is happy to inform you that the US dollar is accepted in all of the hotel’s restaurants and stores. Despite my most dogged investigative efforts, I have been unable to determine whether the Palacio de Sal will take salt as payment for staying in the salt hotel, but I’m betting the answer is no. Which should not stop you from trying. 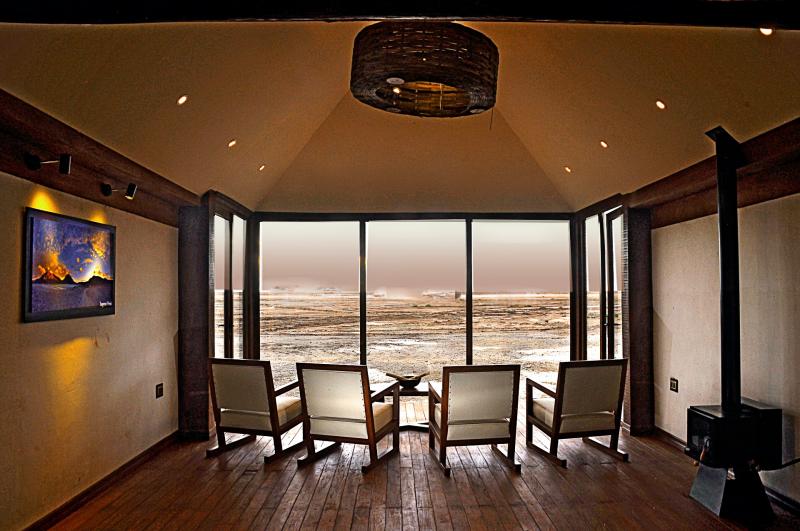 A sitting room off of the lobby