When the tallest building on the West Coast of America, the Korean-financed Wilshire Grand Center, opened in the summer of 2017, it was as if one of the extraterrestrial spacecraft from Arrival had landed in Downtown LA. The local community was anxious. The press called it a “missed opportunity” and despite its scale and luminosity, I did that really ignorant thing of being influenced by the crowd, rather than by my sense of adventure, so I avoided it.

With a construction boom here not seen since the Roaring ’20s when the Biltmore Hotel, majestic movie palaces and the iconic City Hall began to transform this cowboy town into the Paris of America, it’s evident that the economic revival is picking up where the great depression, World War II and the Cold War left off.

The fear around the alien building was that it was out of sync with the rich cultural renewal here, we worried that the alien didn’t understand us. But in truth, we didn’t seek to understand it. We needed Arrival’s linguist — we needed Amy Adams!

In October 2017, when the Los Angeles Dodgers made it to the World Series for the first time in 30 years, their downtown stadium was host for their games, and for several weeks the DTLA skyscrapers sparkled with the team’s colors, blue and white. None was more magnificent than the Wilshire Grand, which became a glittering lightsaber of LED, a sophisticated Bladerunner moment of tasteful color and motion. The alien began to communicate with us and at last we began to understand.

A British pal visited in the first week of 2018, and one of the shocking things about the Brits when they visit LA, is they like to drink! At lunchtime! Thankfully, so do Koreans, and a perfect opportunity arose to visit the skyscraper, both home to Korean Air and the Intercontinental Hotel and various retail and office spaces still under completion. 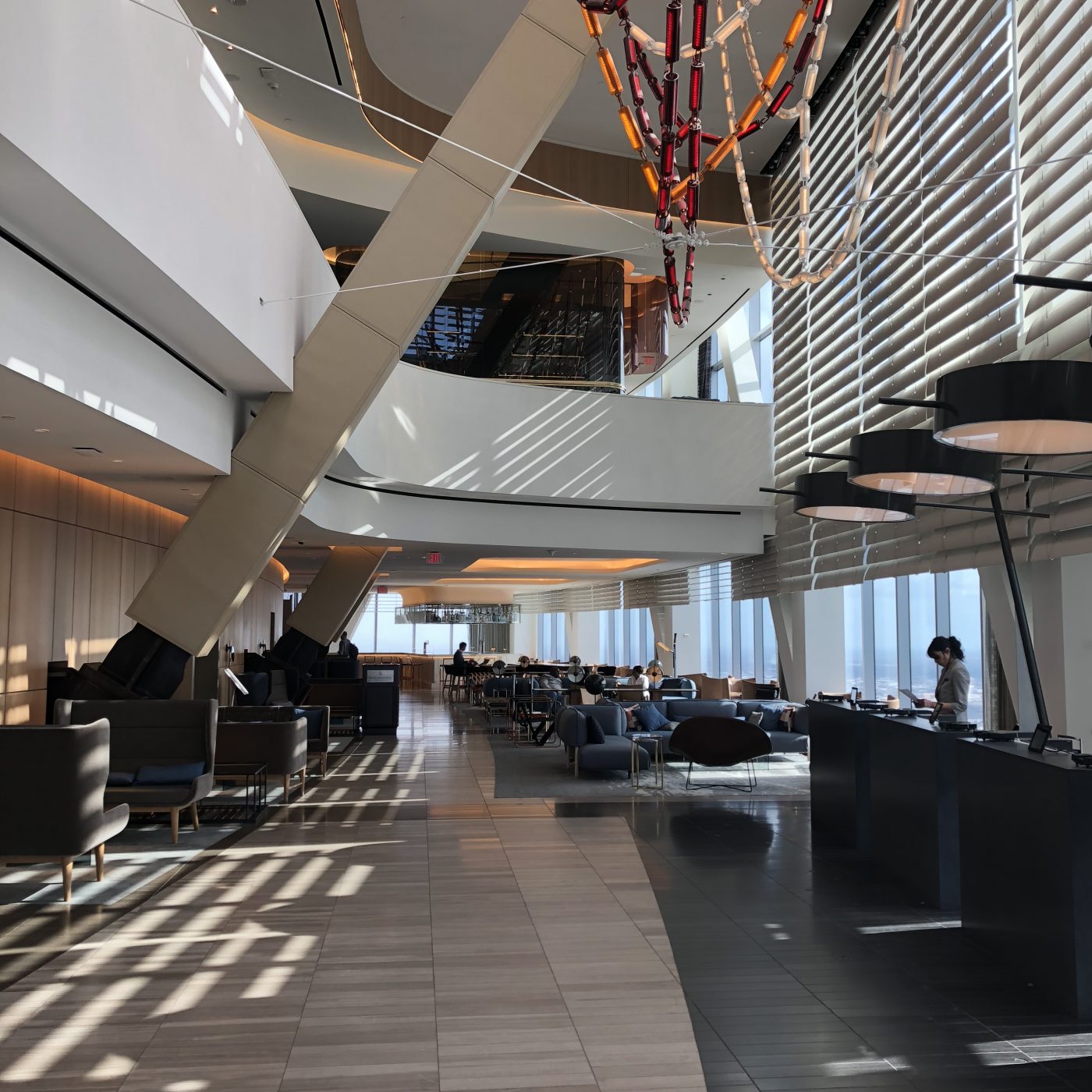 After the party, it’s the hotel lobby

To my delight, woven into the design and decor of the building, is a California love-in. Architect Chris Martin’s distinctive sail-shaped top was inspired by Yosemite’s Half Dome. The interior embraces British architectural critic Reyner Banham’s theory of the four ecologies of LA, which helped us see this fragmented city as a breathing whole.

In the valet parking area, the long panoramic mural is a silhouette of the Los Angeles skyline — a skyline we experience from the car. Reminiscent of pop artist Ed Ruscha’s linear documentation of the Sunset Strip, we recognize hotel signage, Watts Towers, palm trees and Randy’s Donuts. It’s very cool.

The lobby is dominated by a three-story-high site specific art installation by Korean artist Do Ho Suh, made up of 86,000 figurines, in a sea of candy-colored oneness. It is warm, human and inviting and reminds us that Los Angeles has the largest Korean-American population living in the most culturally diverse city on the Pacific rim.

We rocket up to the 70th floor with video walls simulating our ascent, blurring virtual reality with our ears actually popping!

The Intercontinental Hotel’s Sky Lobby has breathtaking views. Historically, this has been a horizontal metropolis, I know marijuana is legal here, but it’s unusual to be this high in LA! Downtown has always been Hollywood’s favorite film location and this space will be it’s new darling. It’s chic and sexy without pretense, since LA tends to have a relaxed, casual dress code — although, be warned, and yes Jimmy Iovine, we’re talking to you… — no baseball caps! 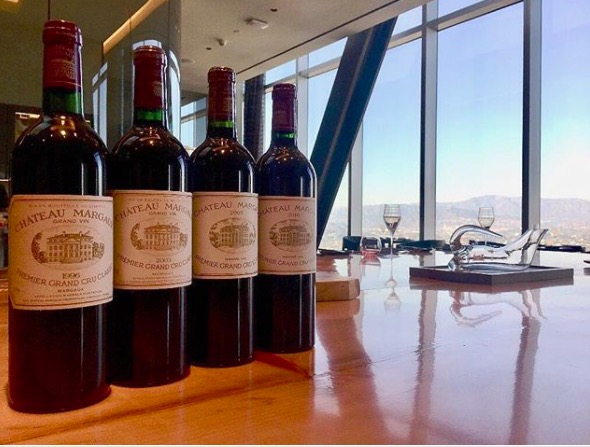 An Autopia theme continues with the chandelier, a chain of lights in automotive red, white and amber, hanging above the check-in desk in a pattern based on a schematic of the 10 and 110 freeway intersections. This, along with LA’s three other ecologies, according to Banham, Surfurbia, Foothills and The Plains of Id, can be seen from the 360-degree views from the observation deck. We feel like we are at the center of this decentralized metropolis, giving us eagle eyes on the city of Angels, most commonly seen from the car. It’s refreshing since Los Angeles was listed recently, less refreshingly, as the most congested city in the world by the Global Traffic Scorecard.

The lobby bar is floor-to-ceiling windows with stunning views of one of America’s most intact historic cores, which many of us here are keen to preserve. Developers are learning that historic preservation is good for business and the Wilshire Grand, I think, gets it. In the bar, a neon sign with the ditty that for generations has helped Angelenos remember the street names: From Main we Spring to Broadway, and over the Hill to Olive. O, wouldn’t it be Grand if we could Hope to pick a Flower on Figueroa? It’s a charming detail, that only a local would appreciate. 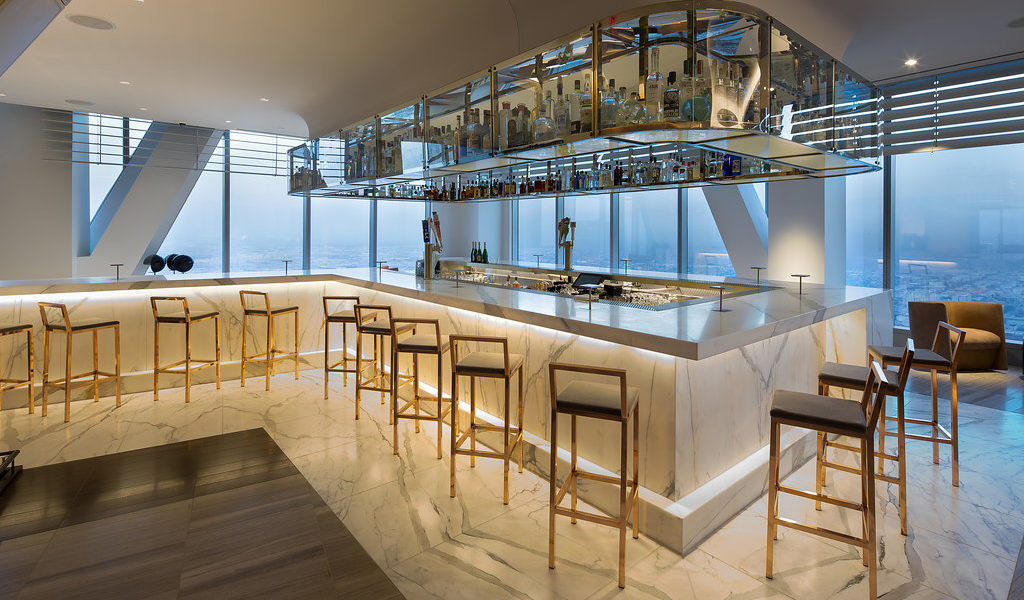 You’re not there yet, but still pretty high! The lobby bar

There is a selection of cutting-edge restaurants here, too. But, to cap it all, we ascend the Art Deco-esque spiral staircase to Spire 73, the highest open-air cocktail bar in the entire Western Hemisphere. It’s California casual rather than Euro-wannabe. It’s a trip to the desert, a ride on the space shuttle, maybe I will have a gin in that tonic, after all! Of course, LA doesn’t have Big Ben, the Empire State Building or the Eiffel Tower, but we do have the most magical sunsets and now, one of the most romantic places to enjoy it.

So, who knew, the Wilshire Grand is a symbol of LA pride? It was I who was the alien — for the alien has come in peace.

Spire 73 is the highest cocktail bar in the Western Hemisphere partly because a slightly higher one in Toronto is currently closed.

Here’s the link to the hotel: DTLA Intercontinental 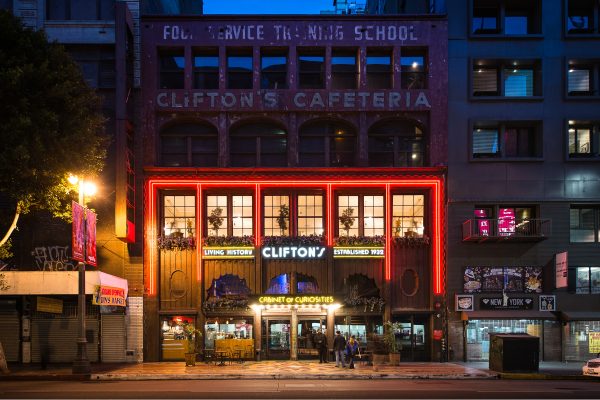