Having started January 9th and running until February 27th, ACTION, at Daniel Cooney Fine Art in New York City, is an exhibition of the extraordinary art of Samson Pollen, a prolific illustrator who painted the era-defining covers of once cutting edge, pre-Playboy, men’s magazines, as well as countless paperbacks and other magazines. Only 13 paintings are on display/sale here, in his first showing at a commercial gallery, so surely more shows will follow in the future.

I think of Pollen, who died in 2018, as America’s other Norman Rockwell, night to Rockwell’s day. Rockwell painted America’s fantasy of itself, of its eternally sunny virtues. But Pollen painted the real fantasy of American males, recently home from war, of lithe, beautiful, worldly and often naked women, usually with a virile man holding a gun in his hand, taking care of business. In Pollen’s pictures good men defeated bad ones and a gorgeous woman was by his side and presumably on her way to his bed. 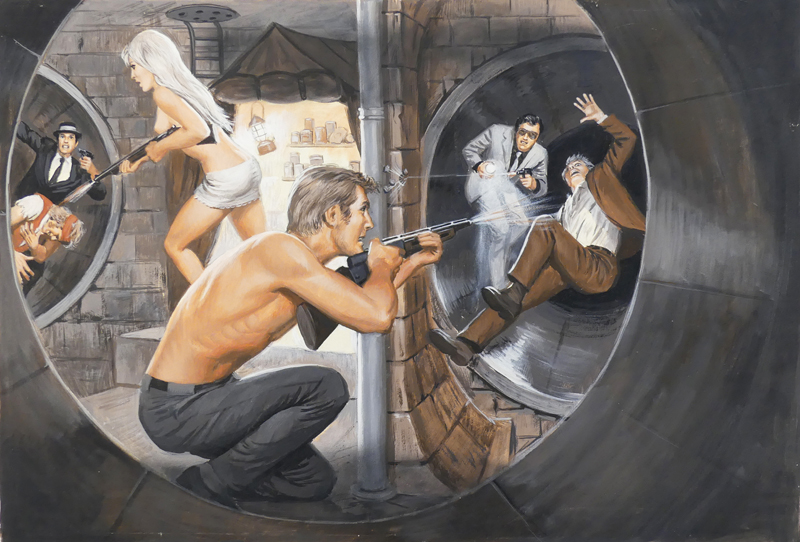 Bronx born and a life-long New Yorker who lived mostly in Manhattan, Sam enlisted in the Coast Guard in the Korean War in 1950, but barely left home as he was stationed in Staten Island, where he was assigned to illustrate the Coast Guard magazine. Following his discharge, he moved the few miles back into Manhattan and began a commercial career as a much sought after illustrator for paperback covers and the new breed of sexy men’s magazines.

The magazines proliferated in the ‘50s and ‘60s and were highly competitive, leading to editors always looking for more adventurous, sexually titillating cover illustrations to sell copies. “The more way out they were, the more editors liked them,” Pollen once said. “They were trying so hard to do something different and stand out, they came up with these crazy ideas all the time. Nothing was subtle, you know? They wanted compositions that were exciting, and a little different. And that’s the way I think. I feel I gotta do something a little different, if only to suit myself.” 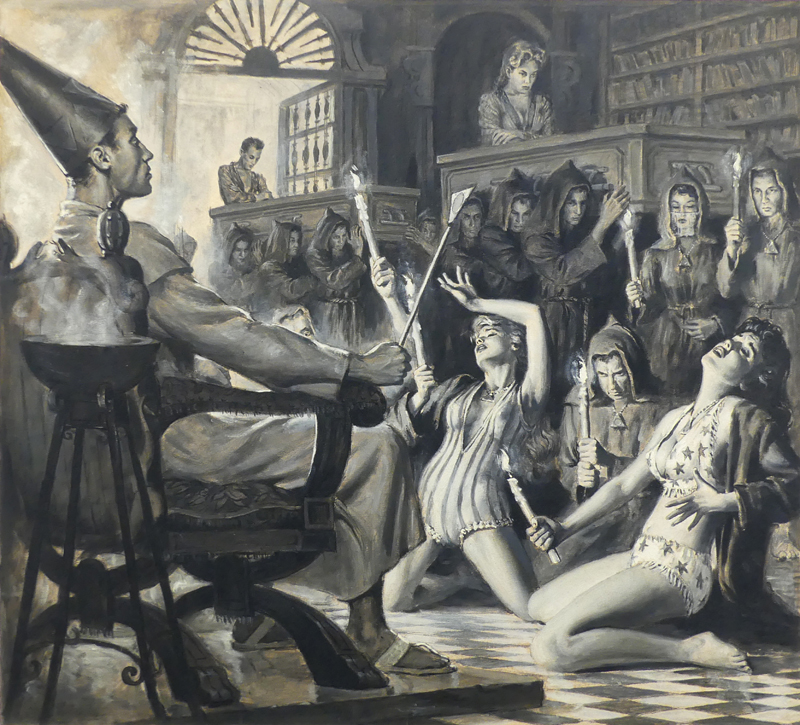 Despite the women often being shown, scandalously at the time, naked or near enough, Pollen insisted that his male models always had pants on, and the female models always wore bikinis. Jacqueline, his widow, who was married to him for 41 years, says: “When he had these models, never were any of these people naked. ‘And the reason being I did this,’ he would say, ‘was because I wanted them to concentrate on their work, not on each other’ He wanted them focusing on what they were doing!”

Those times weren’t politically correct of course. Did she see anything wrong in the portrayal of women in those pictures? “Absolutely not. The people shown in these paintings are adults, not kids. The magazines were for adults. When I was dating Sam, I came up one day, and saw his paintings, and said ‘wonderful!’” 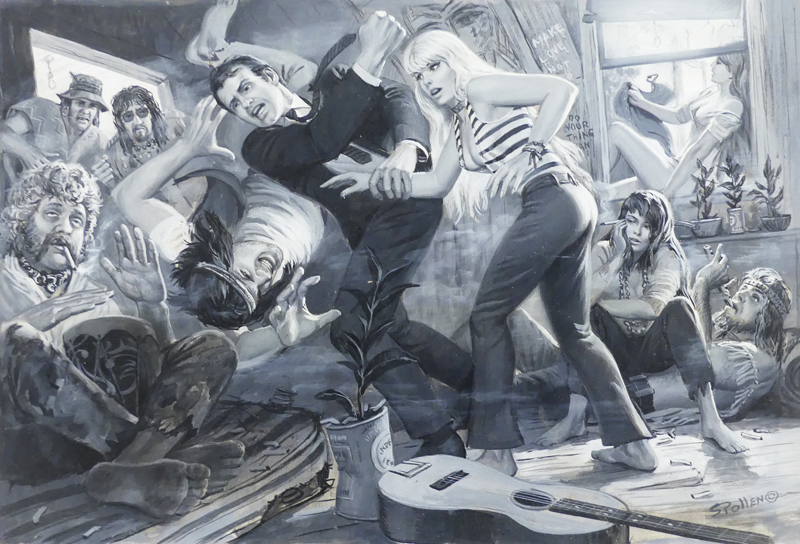 She also modeled for him, although not for the racy magazines. “I did model for him, one was for a Civil War piece he was doing for the military. I was the soldier, in several poses, crouching, standing, I had the gun in my hand, all these different positions. When he finished the painting, he put beards on these guys, and uniforms. It was called The Battle of the White House. In his paintings, I’m always dressed!” 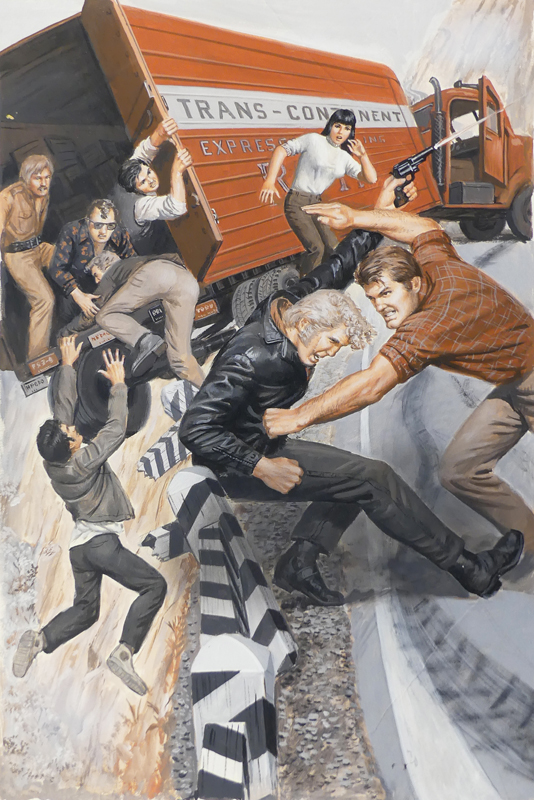 We Battled The Terror Gang of Death Ride Highway, 1973

Pollen had a couple of favorites. “He did a painting of a man being murdered by the mob, and he’s tumbling down the stairs,” describes Jacqueline. “He was exiting a bordello, and all the women are looking out the window at him getting killed, at the mobsters in a car shooting him. That was his favorite, the first one that sold at the show. Another was of a basement, guys playing ping pong, and a woman is lying across the table in a bikini! 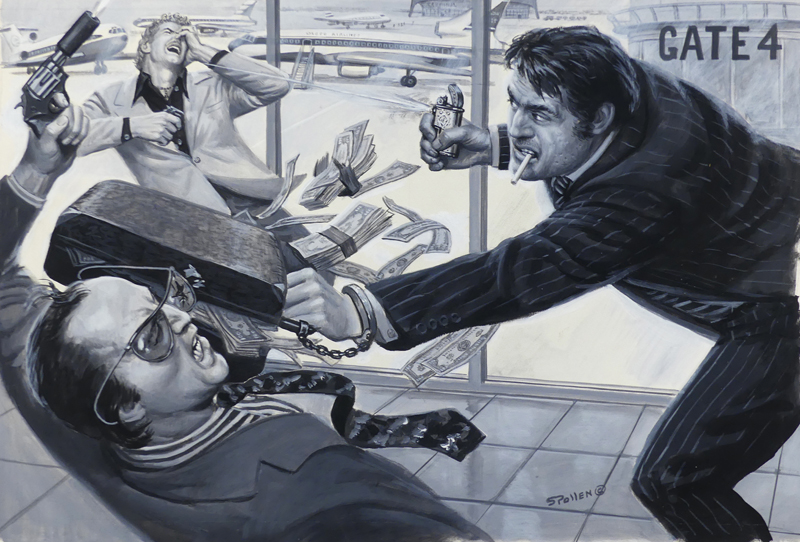 “He did a lot of children’s books, a lot of westerns. And he was commissioned by the military to do a painting on the war in Iraq, in 1991. They flew him over there.”

He once told an interviewer that he got very little guidance for doing the action covers, and had to imagine what would have been going on. He said he would become a bit of “an actor” and place himself in the story he imagined, and work from that. What was he like when he wasn’t working and inhabiting the fantasy life of the heroes he painted, I asked Jacqueline, the person who knew him best? “The most marvellous human being on the face of the earth. We had a lot of fun.”

He was a superb artist. I love the humanity in his paintings. None of the characters are vapid. There is a strength and vulnerability in them at the same time. They are excited, presume they are invulnerable and will be forever young and mischievous and sexy. I hope some of his work winds up in the top museums, like New York’s MOMA or the San Francisco Museum of Modern Art. Pollen was of a time, every bit as much as Lichtenstein, Pollack and Rauschenberg.

During the tumultuous Sixties, Doris Derby chronicled the civil rights movement with her gentle photographs of African Americans living everyday lives in the eye of the storm

Famed photographer Michel Haddi is having an exhibition of his illustrious Kate Moss photos, and has just released a book of his best images 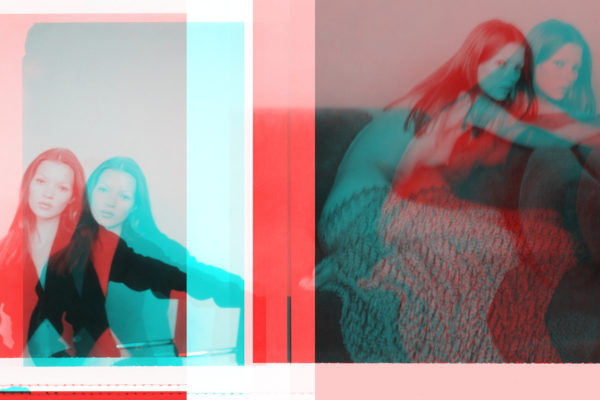