“The humpbacks are passing through here these days. You can hear them underwater,” Bernie Cyr, a Professional Association of Divers Instructor (PADI), and fellow Canadian, says a moment before the pull-cord motor turns over and our boat jerks away from the blue-green harbor. It’s here where pirate ships of carved wood and hardened sailors once floated and now, this bare-bones boat, carrying neoprene-suited divers, sets out upon the same clear waters for us to go scuba diving.

Explorer Christopher Columbus landed on these golden shores he dubbed La Isla Española, our modern-day Dominican Republic, at the end of the 15th century. He was followed by Sir Francis Drake, the famous/infamous pirate or hero-explorer, depending on which flag (Spanish or English) you were sailing under.

It’s a short distance from the beach to the patch of blue water rolling softly over sunken mysteries below.  “You’re going to see a canon at depth,” enthuses Cyr as we strap on our gear and tanks. Cyr works out of Merlin Dive Centre in Sosúa in the DR and today is leading a Deep Dive Speciality course that allows underwater explorers to go beyond the 60 feet limit of recreational Open Water divers.

With a backwards flip and an OK sign, the air whooshes out of our equipment and we descend over fan coral and schools of wide-eyed yellow fish. The deeper you go, the shorter the time a human can stay underwater.  Our spongy exposure suits slim down and our ears release as we equalize under the pressure, but with slow and steady Darth Vader-ish breathing, staying deeper for about an hour on a single tank of air is possible. A spotted moray eel curled up among the reef catches our attention on our way to the ancient armaments slumbering peacefully on the sandy bottom. There are three canons at this site and at about 90 feet, we encounter the first one. Sea life in the form of algae and corals have grown on the iron but the cylindrical shape is unmistakable.  With a curious angel fish hovering above and branches of fragile coral surrounding the canon, it seems a fitting end for a weapon which once blasted metal balls of destruction into the sides of rival ships staking claims to new lands. “We researched them, and one is from the late 1500s, the others are from the 1600s,” explains Cyr later, “most likely Spanish, but possibly English.” 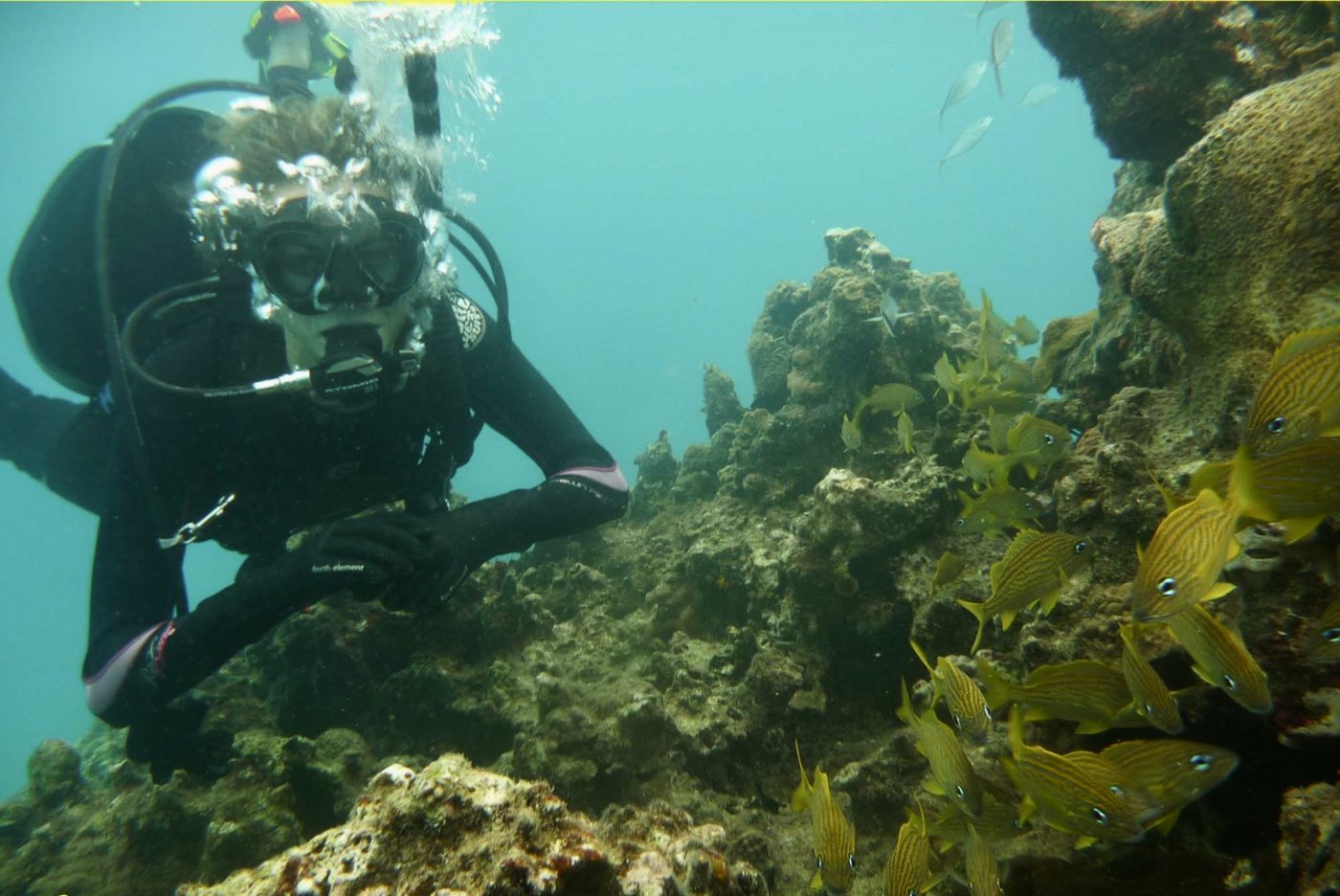 Victoria arrives on a reef, and some striped yellowfish suddenly remember another appointment

The first permanent European settlement on the island was founded in 1493 by the Spanish following Columbus’s expedition, on the north coast, a short distance from the site of our deep dives in Sosúa. The island was inhabited by the Taíno — indigenous people who were at the mercy of modern Spanish weapons and foreign germs. Like all classic pirate tales, gold was at the center of this one, and soon the enslaved Taíno were forced to pan for it in the Cibao Valley.

When you are scuba diving with a piece of history, like the canons of Sosúa or the preserved shipwrecks, which dot the bottom of this underwater world, a sense of deep calm steals over you. It’s this feeling, often found at hundreds of feet below the waves, that inspires divers to gain experience to meet the dangers of deep diving with confidence. “There are many sites and certain activities that cannot happen without the deeper dives,” says Cyr. “Take things slow, well planned, with buddies and backups and diving is enjoyable and fun.”

Back in the ocean again, this time for a shorter and shallower depth, the warbling cry of a humpback whale reverberates through the water. The humpbacks may be far away, but their calls mean we’re all down in those depths together and there’s something thrilling in that idea. The thrill is a huge draw for people interested in diving, as it was for Cyr when he began the sport. Cyr was an expert at jumping out of planes as a skydiving instructor and National Skydiving award-winner in his hometown of Edmonton, Ontario, when he and his pals had a brainstorm. “We were sitting around a campfire at the Skydive Center one night saying we should have a James Bond weekend…you know, we go paintball or something, then drive up on our Harleys, fly the plane — I was also a recreational pilot — skydive, scuba dive, ballroom dance and drink martinis poolside… EXCEPT none of us had ever gone scuba diving! So we signed up.” A decade later Cyr and his wife Rosemary “left the bullshit behind,” as he puts it, and began their lives afresh in Sosúa. 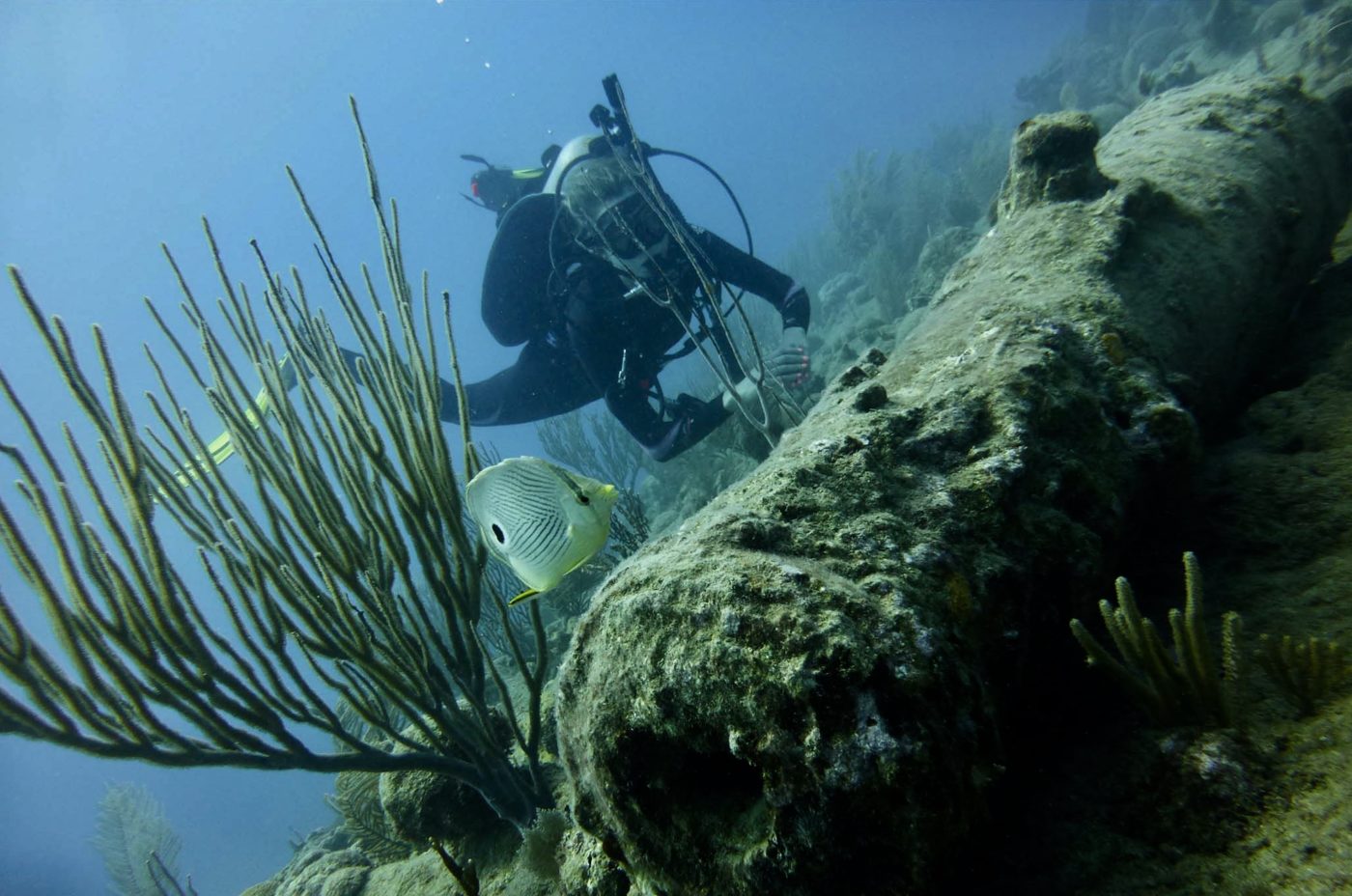 Cyr flicks his fins and we follow to see what creature he’s spotted. A diffused groan cuts through the water as he gently unravels a man’s shirt which is wrapped around an intricate coral tree. He manages to clear the garbage without disturbing the fragile life of the ocean which over the years has been struggling to continue under endless garbage and environmental changes.

“More than two thirds of this planet is covered in water,” says the diver. “The fact is, this is a water planet, and something I have seen change so much in my lifetime.  Where there used to be fish so abundant you would literally have to wave them off in front of you to see…now we get excited to point out a few fish.”

Near the end of our last dive together, Cyr points to a rainbow painted parrotfish knocking its kiss-shaped beak at the reef for lunch. Cyr makes a heart shape with his outstretched hands and we smile beneath our regulators. These beauties are a favorite and as he reaches down and picks up a stray plastic bottle to tuck into his vest, we listen to the quiet pecking of the fish in the otherwise absolute silence of the deep and understand what “leaving the bullshit behind” really means. 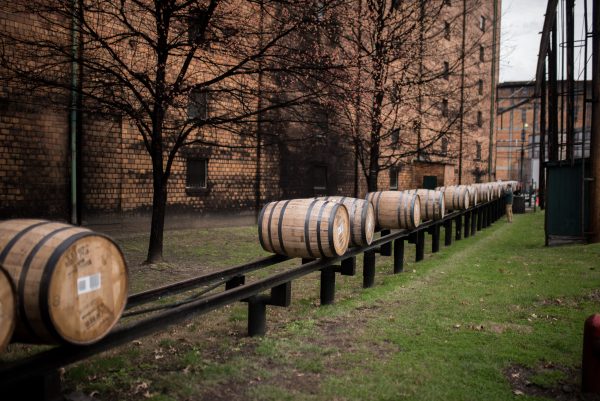