Siena floats like a medieval dream upon a sea of yellow sunflowers and green Tuscan hills. In the Piazza del Campo, at Bar Il Palio, it’s fair to say, this could be that wonderful little town in Italy where you fall in love, all over again. 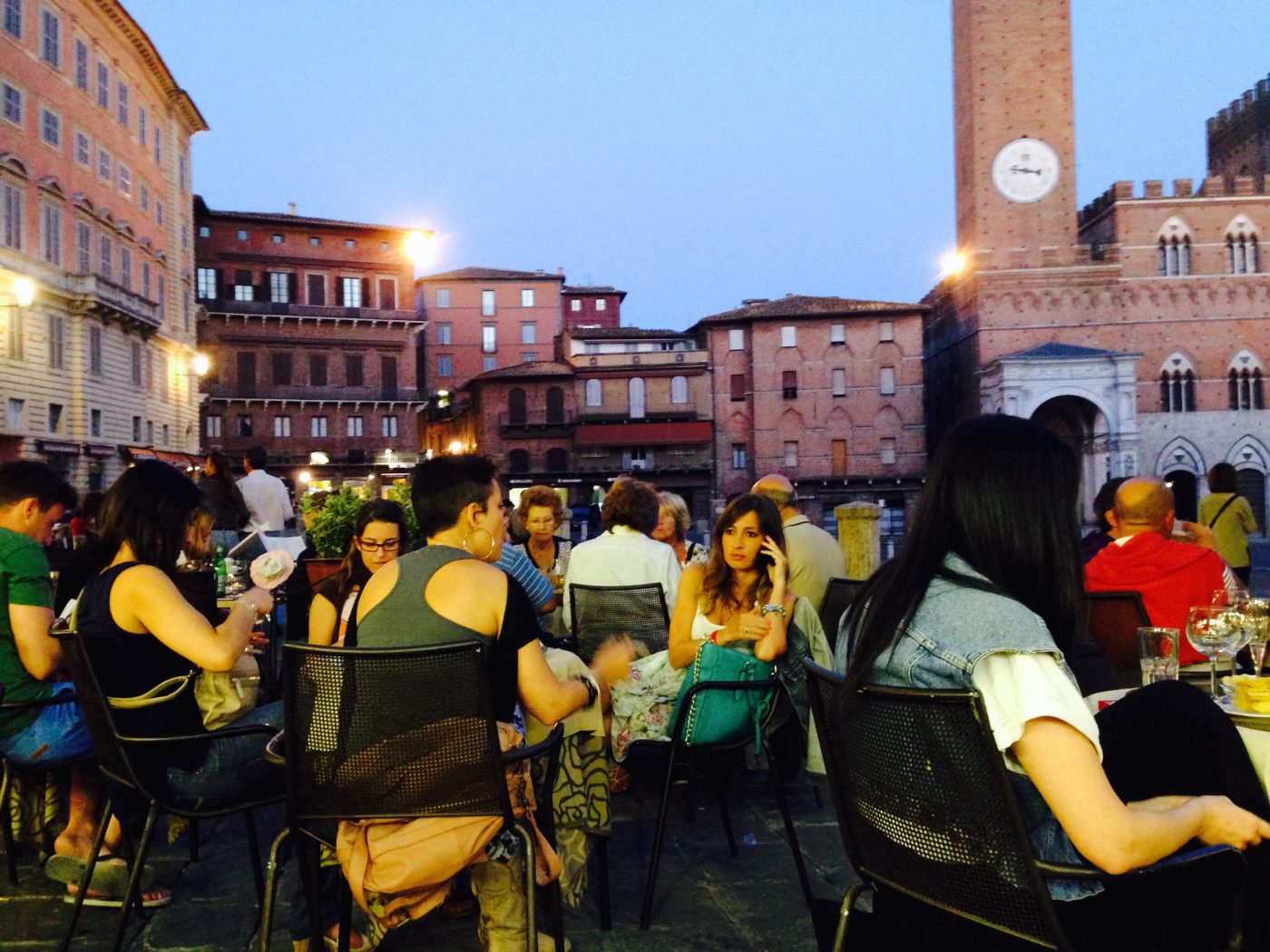 The intimate Piazza del Campo is brimming with polite youths on their summer holidays and at 9am, the cafes are civilized. Time slips away on the high clock tower, Torre del Mangia, as you nibble on pastries and sip small cups of coffee.  If a young Sophia Loren sauntered by your table, it would be fitting, for nothing has changed in Siena for a very long time.

“I served Daniel Craig coffee in my corridor,” says Mario Felice Schwenn, a Tuscan vintner who lives within the walled city.  Mario has three beautiful children, each one from a different madonna. You immediately fall in love with him and consider having his fourth child.

When I was there, flags were being hung around the square and you could see wooden boards set in position from your table. The Palio was coming in two weeks. “It’s a race that endures throughout the year,” says Mario, his floral shirt flapping in the warm breeze. “Imagine, this little town, divided into sixteen worlds. The ‘contrade’. Each one has an enemy and this endures throughout the life of the people here. Truly, the Palio defines the socio, cultural and economic life, and has since the middle ages.”

Even when Il Palio is not on (it happens on July 2 and August 16), you can experience the sixteen “contradas” by getting lost down a side street. Bright whimsical flags of lions, unicorns and bulls hang proudly in each district, or ward, to signal which you’re in. 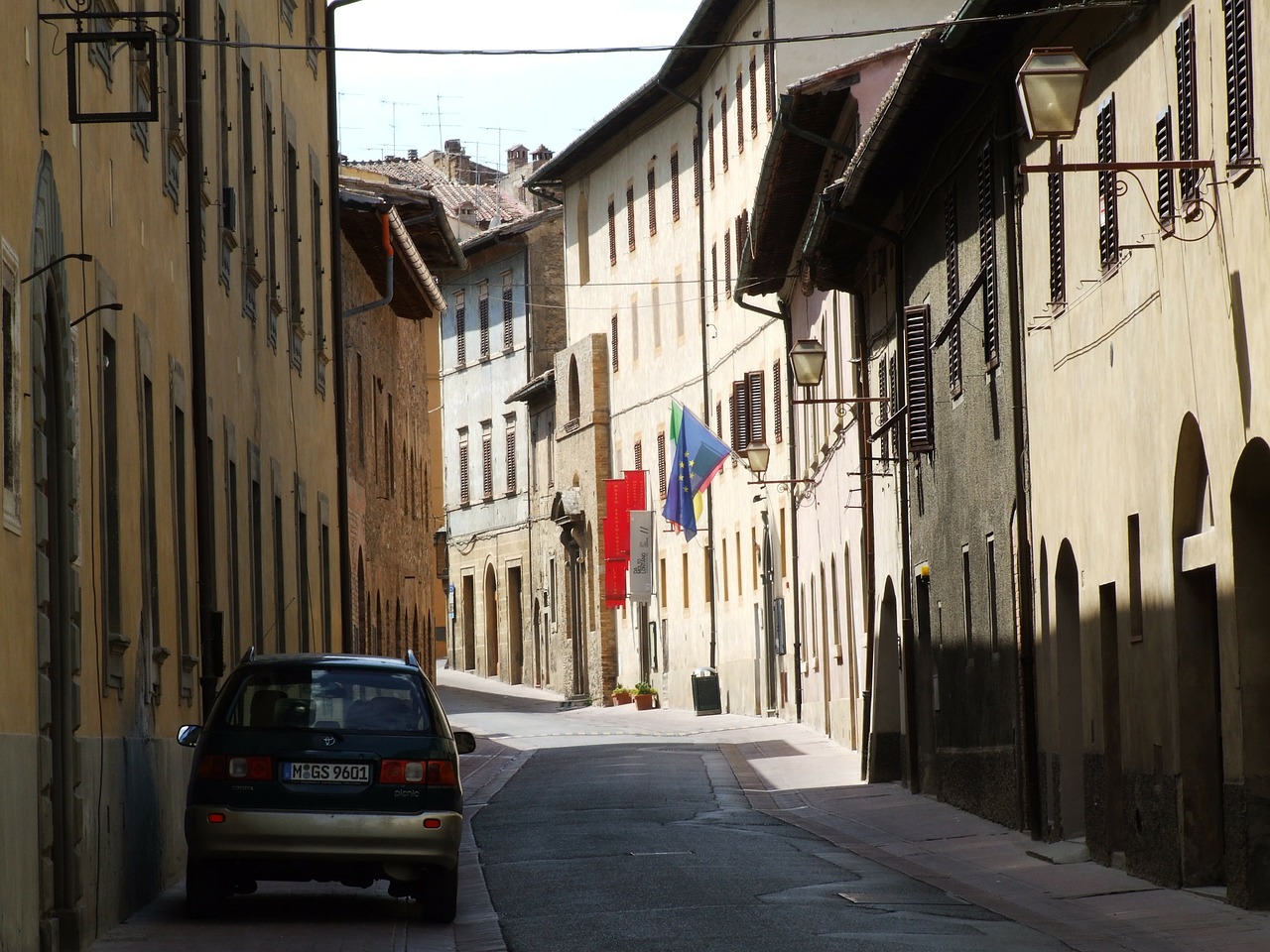 “It’s a town of values,” says Mario at Bar Il Palio. Maybe he knows how turned on you got at the theatre? Then he, and the man in the red pants who sits at a small table on the square most days, eye long-legs floating past the bar, and you relax.  Tanned mid-riffs, white cotton crop-tops and high-waisted shorts abound as does kissing under a crescent moon on the pink stones in the middle of the square.

“There is an innocence here. A protectiveness,” Mario says, eyes still on a disappearing round bum. 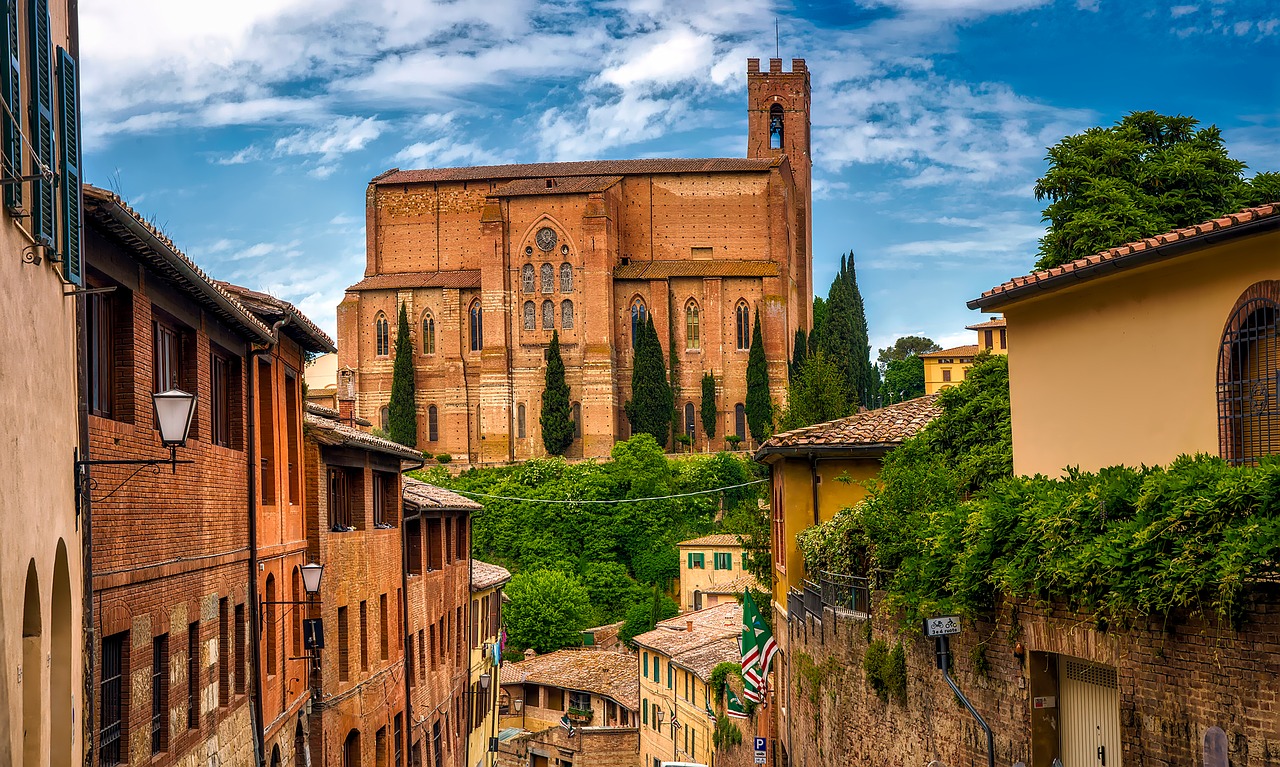 Wild nightclubs and hard music have not come to Siena. The “scene” after dark is more likely to involve Elvis Presley sung with an Italian accent over late night gelatos and slices of pizza. If you stay up, it’s limoncellos, and live soulful jazz at 3am.

Lazy late lunches just outside the walls at Orto De’ Pecci, are scenes out of a tapestry; two peacocks chatter by your table as you drink a fresh Tuscan wine and children laugh as they splash in a 600-year-old fountain. The carciofo (artichoke) risotto is fragrant and perfectly cooked.

Daniela Radice, a fashion designer on respite from Milan, is there taking in the Tuscan sun. She works for Dolce and Gabbana and has her own line of purses under ALI e RADICI. We talk of love and men. Even in broken English this translates well. “They are sympatico, yes? Do you say it like that in English? Gentle… sweet, you know?”

The lolling hillsides of Tuscany are a mere 20 minutes beyond the walls. After an afternoon of Sangiovese and sunflower gazing, change into your best “Italian” look.  Bright dresses, thin ankle suits by Gucci, anything designer will do. Saunter down to “Ristorante Enoteca I Terzi,” the place elegant locals go to drink super Tuscans in Roberto Cavalli. 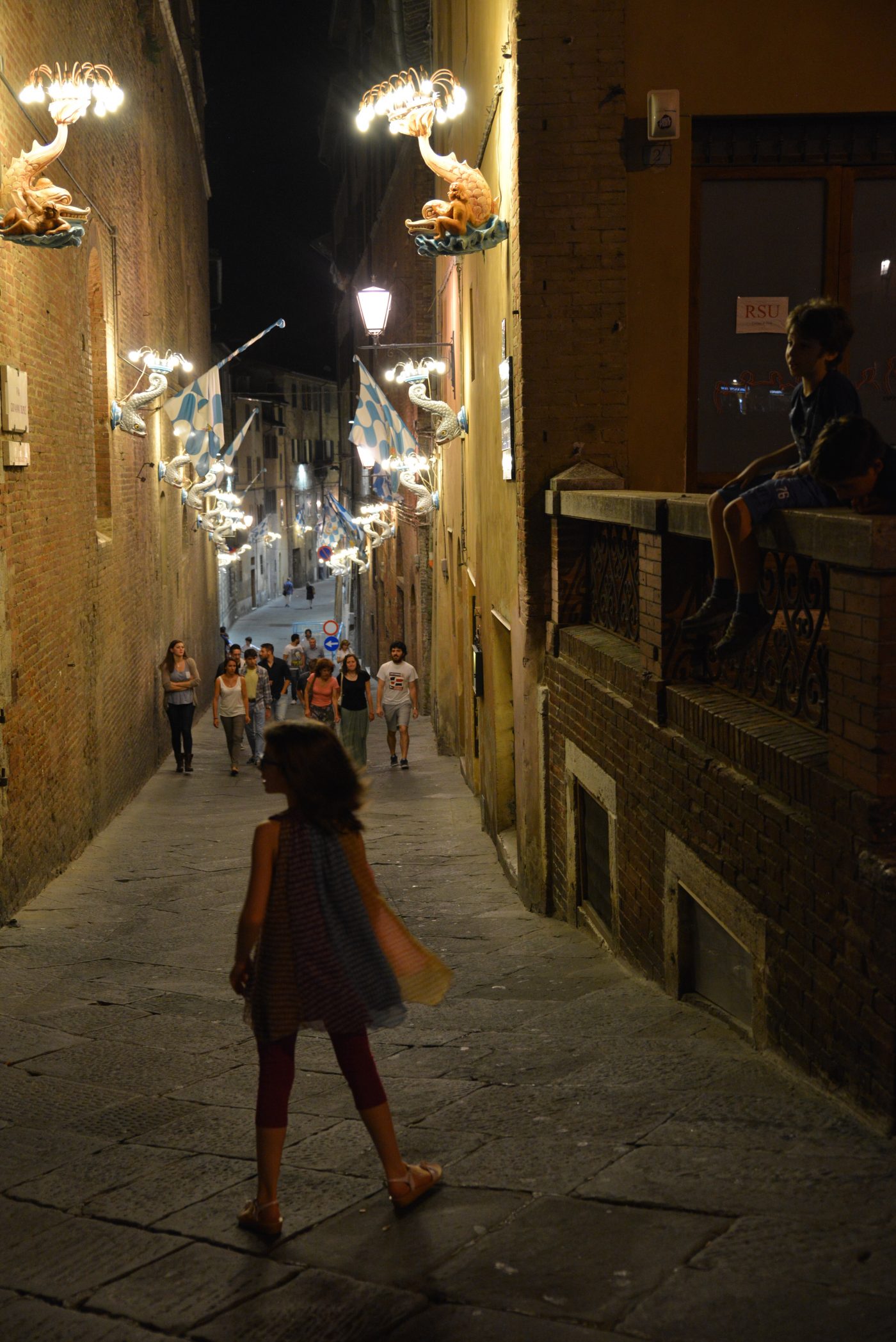 Or for an intimate street-side experience, Ristorante Guido Siena is set up under the stars. Chef Franco’s little flour and potato pillows of gnocchi melt in your mouth. Franco is a huge man. You know he eats a lot of his own gnocchi, so it’s going to be good. The duck and stuffed flowers are as delicate as Franco surprisingly is. Compliment him on his funky shoes — he likes that.

Back at the cafe, Mario is there. Of course he is, he too is addicted to Bar Il Palio. A young waiter curls our oranges just as we like and sets down a plate of small sandwiches with fleshy olives. “So now, how do you like our large living room that is Siena? Che bello, si?” asks Mario.

As the sun melts over the pink square, tourists kiss and selfie and children chase balloons over cobblestones.  The man in the red pants, the one who has been sitting at the back table, glances at you. He’s with a woman tonight. He’ll smile ever so softly if he recognizes you; after all you have been sitting at that front table at Bar Il Palio, the one on the square, for a good long time.