At first glance, the Tropic of Ouzo, subtitled An Ungodly Adventure, is everything you want in a graphic novel. Moody, mythology-suggesting cover, fantastic graphics — each panel is a painting — and a wonky title that must mean something profound but of course you have no idea what. 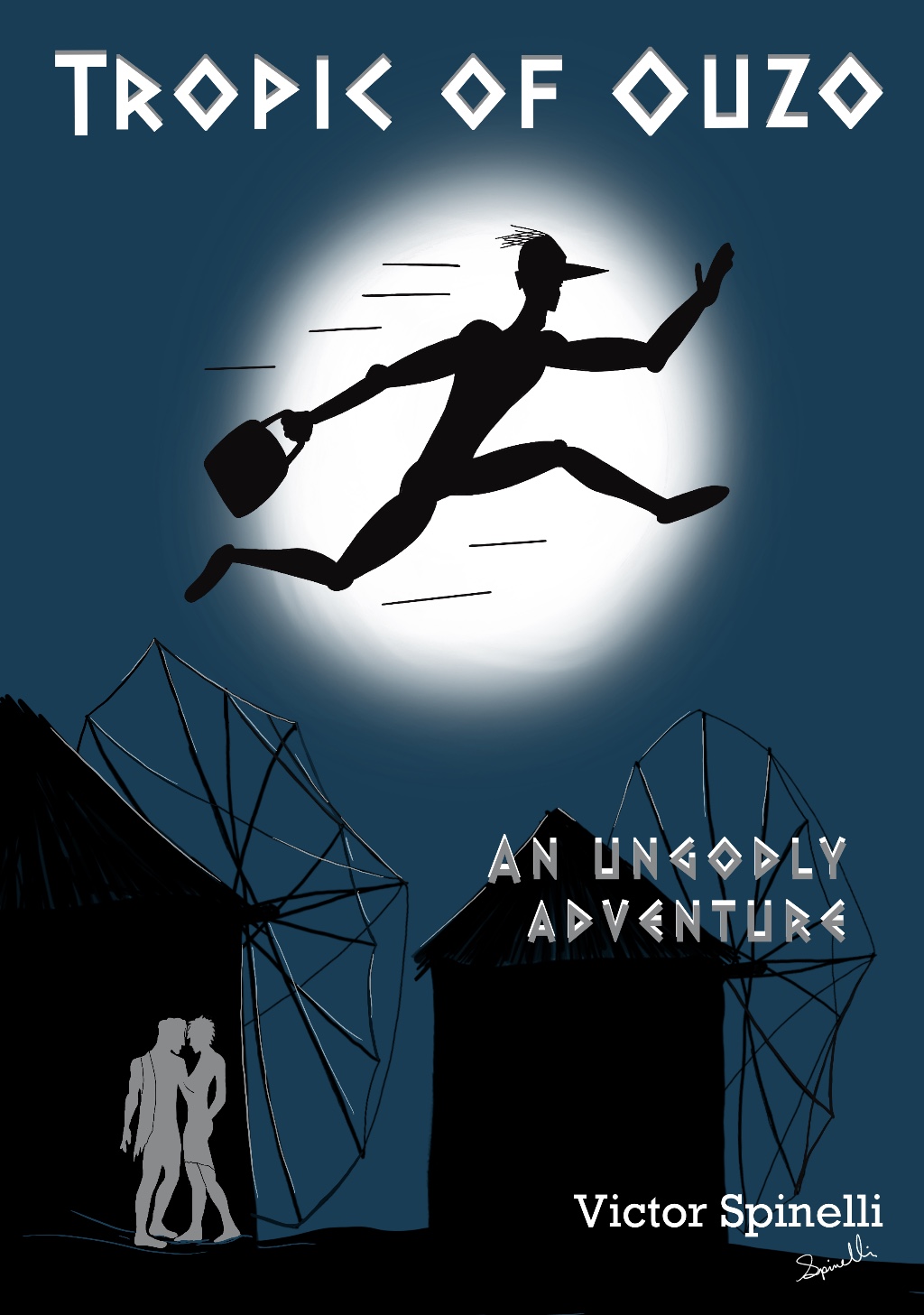 I want it! I have it! And that makes me part of an exclusive audience. There are rarer (and far less interesting) NFTS. Because the artist who created the book, photographer, painter and sculptor Victor Spinelli, who we’ve already featured on our august pages, only printed 100, and they are not for sale.

Well that’s a turn up for the books, so to speak, isn’t it? At a time when a billion YouTubers and TikTokers are trying to sell you something, even if it’s just an NFT of their nose hair, here’s a certifiable genius, who spent over two years illustrating his modern myth, who won’t let you buy it!

Maybe some smart publisher will convince him to, but, as he adamantly told me, that isn’t the point of the book. He came up with the story some time ago and sees it as a movie, and definitely not some wanky, self-indulgent, every-scene-goes-on-too-long, indie art film. No, this should be a blockbuster. “It would be a live action, dark, sexy comedy, like Pulp Fiction,” he says. “A very European style film but for an American and world audience.”

What he has, in effect, produced with Tropic of Ouzo is an extremely elaborate and finished 132 page storyboard, based on a screenplay, Cigarettes, Ouzo & Dynamite, he wrote with Steven Briante. He’s sending copies — don’t look for No 81, that’s sitting on my coffee table — to movie agents and producers around the world.

The story is set in modern day Mykonos, where Greek gods and goddesses — the actual ones, from Greek mythology, not the supermodels and hunks your mind instantly went to — live among the tourists and passers-through, presumably enjoying themselves as much as they used to when the world was categorically theirs. 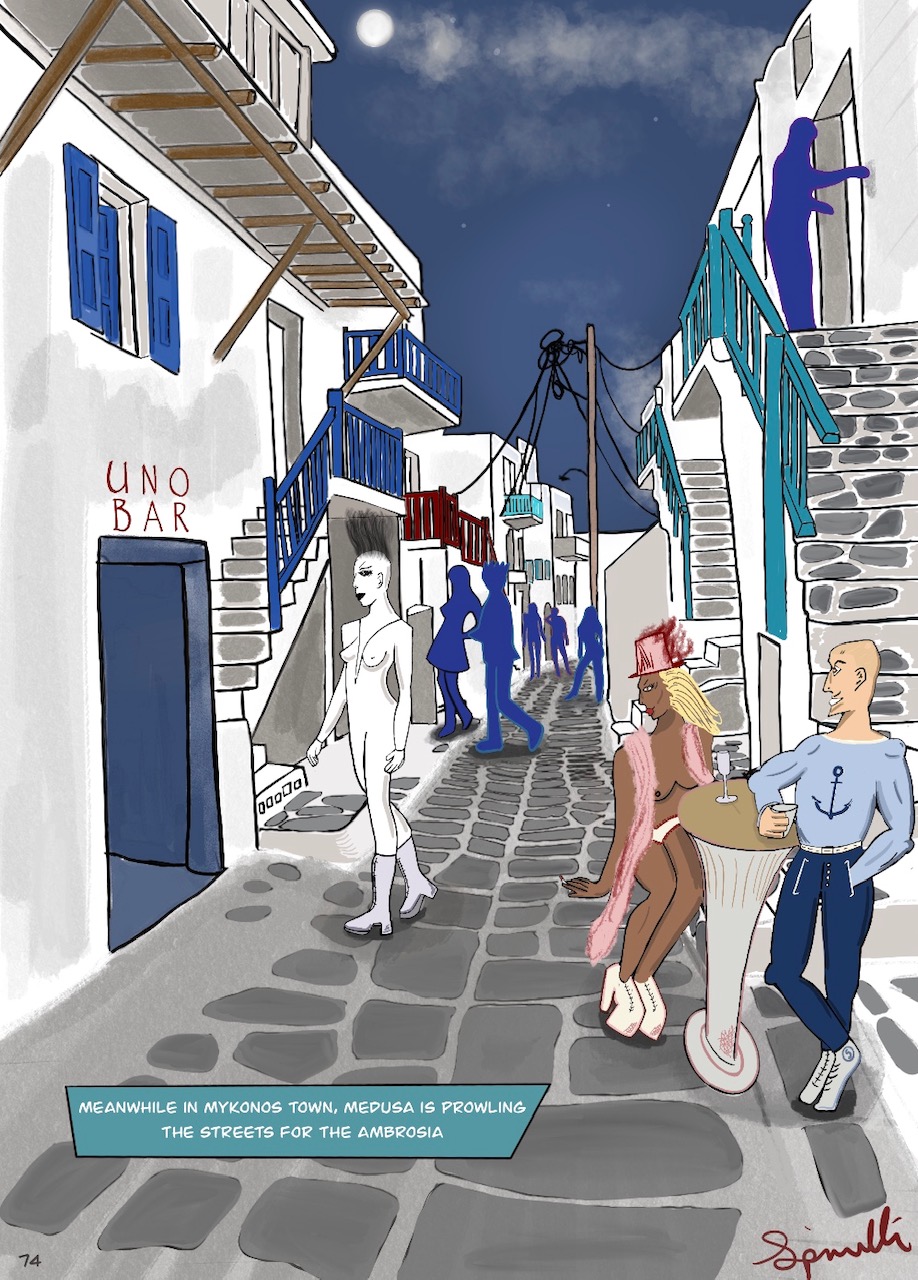 Two of the gods, Titan Cronus and Mercury, make a bet — because, when you’re gods, what else can you do for a challenge? — on whether the human race has integrity and true virtue. Fair question, to be honest. Our heroes are English DJ Tyrus, who comes from the by now almost mythical East End of London, and his fiancée Sophie, who are the unwitting subjects of the bet. They embark, naturally enough, on a roaring adventure of drugs, sex, dancing and “all kinds of discoveries and surprises,” to quote Spinelli. Then Fate, just in from Olympus, sticks his big nose into everything and Tyrus has to choose between immortality and death. As we all do, I suppose, to some lesser degree.

“I want an incredible Avant Garde Director who I can work closely with to create jaw dropping visuals,” says Victor, who’s also putting together “a music library for a great soundtrack as well.” He wants the movie shot within 3 years.

As you can see from these panels, there’s a stunning visual aesthetic here. And a fun, thought-provoking, contemporary fairy tale.

I just wish you could read the book!

(Note to Hollywood producers, if you haven’t seen it, get in touch with Spinelli directly, through his site:  https://www.victorspinelli.com )