Pagan gods, goddesses, animals, nudes all find their way into Victor Spinelli’s artistic tableaux. A prana seeker who thrives on the unconventional, Spinelli is fueled by the magic of the unexpected and inspired in unlikely places.

For the past 20 years, he has traveled to 80 countries, honing his skills in film, painting and sculpture, while also making commercials, music videos, documentaries, print campaigns and now graphic novels. It was while living on Mykonos, following the hippie circuit, that he first learned about the bohemian isle of Ibiza, Spain.

Spinelli arrived in Ibiza in 2001 and is now a full time resident. His oeuvre suggests an artist willing to push into unknown terrain. His work spans photography, acrylic, oil, large sculptural installations in steel and wood; and now ceramics.

As the scientist Louis Pasteur once said, “Chance favors only the prepared mind.”

This would be Spinelli. 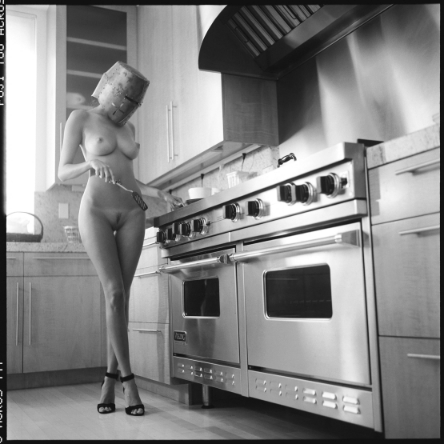 Victor once flew his hot air balloon to 13,000 feet, as a jumping platform for skydivers. While descending the balloon, what looked like a high school as a potential landing zone turned out to be a prison. Through luck and fast-acting piloting skills, he edged it over the guarded walls, manned with snipers, and into the visitors parking lot. The warden and guards ended up posing for pictures with the balloon.

Spinelli had another auspicious moment once he arrived on Ibiza. While walking the streets with portfolio in hand, Spinelli met the founder of the theatrical and Fellini-esque clubbing party, Manumission. He recalls: “I moved to Ibiza to start another Hot Air Balloon business and just happened to be carrying my portfolio of 15 documentary images from India, Syria, Sri Lanka, Mother Theresa, travel photos, etc. I bumped into him on the harbor of Ibiza and showed him. He hired me on the spot to document Manumission. 60,000 Spanish pesetas each Monday night. It was an incredible ride of 5 summers of which my job was to basically follow the Manumission Girls around for 24 hours. A dream.” 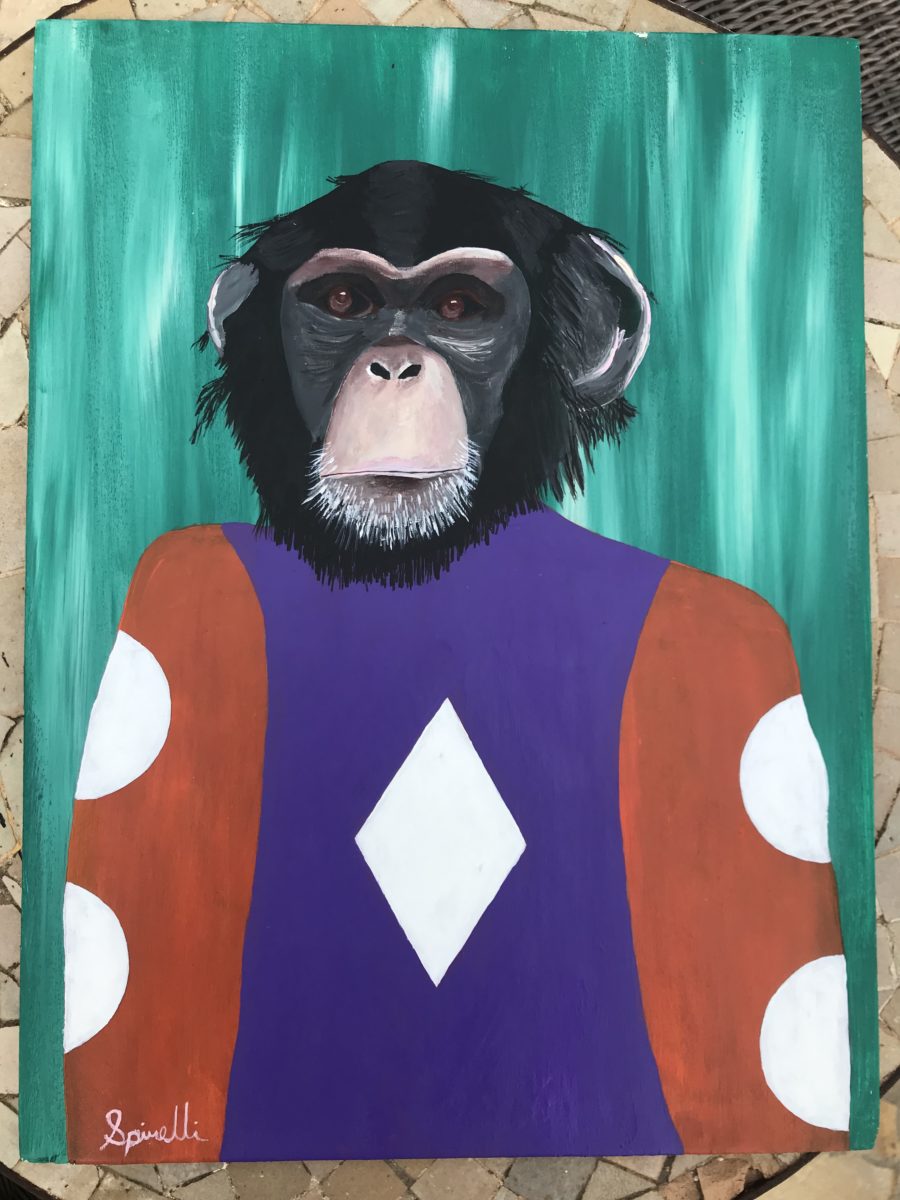 To this day, Spinelli’s role and his Camera Verite series is legendary on the island. There is even a Victor Spinelli room at the Paradiso Art Hotel. Pikes Hotel, one of the most infamous hotels on the island, permanently showcases 65 pieces of his art.

In addition to his playful photographs and whimsical paintings, Spinelli takes on weightier themes such as the earth’s health, women’s rights, cultural imbalances, exploitation, mortality, power, and human consciousness— all laced with a touch of surrealism.

Many of his large sculptural works suggest an urgency. Spinelli’s “Crucifixion” series is a straight dose of reality —  the killing of animals for sport and commodity. For this series, Spinelli painstakingly reassembles animal skeletons, or skulls, setting them on steel and wood crosses.  “Crucifixion” first debuted during Miami Art Basel Week in December 2015. The “Walrus” is on exhibit at Xposed Gallery on The Highline in New York City.

For Burning Man 2019, Spinelli created “Diver UP,” an 8 foot tall wooden sculpture of a feminine torso wearing an industrial divers’ helmet that was later burned on the “Man’s” ashes. The torso rises from the ground, a “Goddess” freeing herself from the shackles of society, history. Spinelli plans to bring her back to Burning Man 2022. This time, as a 24 foot tall interactive steel structure. There are also discussions to someday submerge an ecologically safe “Diver” on Ibiza’s seabed, where her body will attract coral and other sea life, reinvigorating ocean marine life while raising awareness of the fragile ecosystem.

Victor, in front of a variation of his Diver Up

Your “Consciousness series” is your first foray into ceramics. What triggered this?

This is my artistic output from a life enhancing experience I once had during a Jurema DMT journey, which gave me insight into pure consciousness. A somewhat startling, yet utterly profound peregrination through the depths of a realm we should all experience from Mother Earth.

There are a total of 33 pieces and expressions that make up the final selection. It took me about two months to create, making the heads out of ceramic and then firing them. I started with over 45 heads because some cracked and some were artist proofs. This was the first time that I have ever made ceramic art.

When did you realize you could spend your life making art?

In my younger years, 5-15, I used to build models and dioramas with great detail. Mostly WWII models, so I was always being creative with my hands. I still have all of these miniature scenes in storage. Perhaps that could be a show someday [laughs]. For many years I was an amateur photographer after college but then I had an art show at the Vail library, in Colorado in 1998 and sold many pieces. It was mostly documentary and travel work. This was the start.

I started working on film sets and being an assistant photographer in NYC. I was a location scout for Law & Order for two years. So photography and art has been my only source of income since then. But I really never felt like an artist while I was photographing. I didn’t gravitate toward the digital photographic world easily either. I love film. I only felt like an artist when I started painting. All self-taught. But in 2016 I took a charcoal and a pencil sketching class, both a month each, at the famous Art Students League on 57th St in NYC, and this opened up an incredible creative outlet. 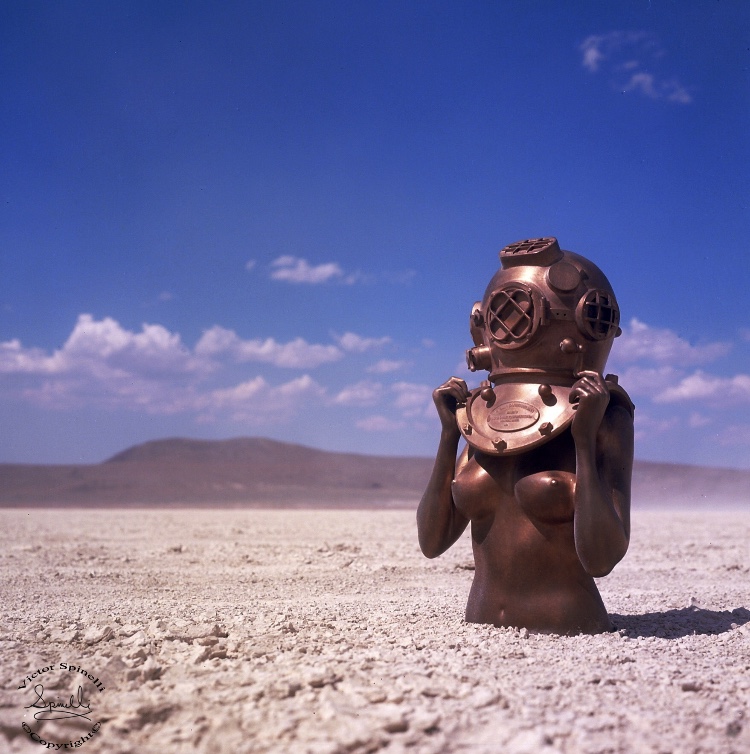 A bronze sculpture of Diver Up in the desert

How did the Crucifixion Series come about?

I came up with the idea in 2014 and was fortunate to have 2 art patrons back this project for the Aqua Art Fair during Art Basel Miami in 2015. I sourced the 5 skeletons and skulls from an osteological company (all legal) but was literally sent bags of bones. I had to visit the Museum of Natural History many times to learn and see proper skeletons. I also bought books and learned on the internet about skeleton architecture and articulation. It was a massive learning experience. But now, thinking about it, I became a certified volunteer guide at the Museum of Natural History in 1994 on the, then newly renovated 4th floor for dinosaurs and mammals. It’s funny, how life circles around.

What was your wildest moment on your own?

I was traveling by myself in Tikal, the famous ruins in the Peten jungle [in Northern Guatemala]. I planned to sleep on Temple IV, the largest Mayan Temple, under the full moon that night. I met an Australian backpacker and we started chatting and he agreed to join me. Then we met two female French backpackers and they also agreed to join us. So the four of us climbed the temple to the highest point (no longer possible) at sunset. A guard came up and we bribed him 25 Quetzals ($5) each to spend the night up there. He soon left and we spent a beautiful night under the full moon 220 feet above the rainforest canopy while the sounds of Howler monkeys echoed all around. The moonlight bounced off the limestone of the temple so brightly that I could write in my diary with only this light.  It was magic.

How has being an expat for so long affected your artistic journey?

Traveling has given me so much information and experiences that it has fueled my artistic journey greatly. Being an ex-pat gives you a lot of fodder for a creative journey when you discover all the nuances of other cultures in certain happenstances. Living in places like Ibiza and Mykonos are just so hilariously funny. The situations, characters, personalities always astound me in these extraordinary ways. 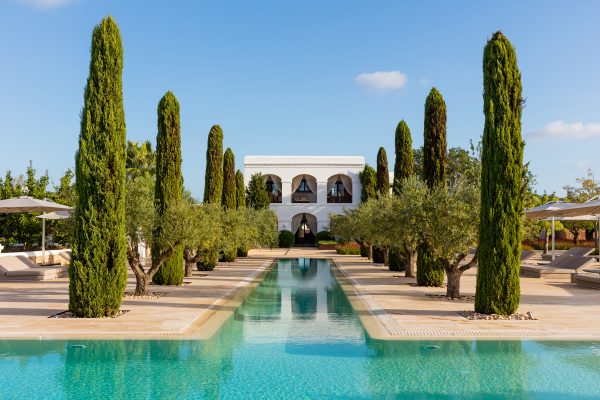