“And rumor has it she not only killed the neighbors, but ate them as well, to secure the family’s land holdings.”

This won’t be your standard story about the Galapagos, land of Darwin, iguanas, and blue-footed boobies.

Our guide Hernan relayed folklore to us about some early settlers from Germany who landed on Floreana island, and how one woman built up large property ownership through terminal neighborly barbecues. In the days she wove her web, there was no one to investigate the spider, and, whoever it was, since there are no official records, got away with it — in this mortal life anyway.

In our theoretically more civilized time, travelers visit the Galapagos to see the wildlife, not eat their neighbors. They come to observe the origin of The Origin of Species and to dive and take sepia-toned selfies with seals.

Darwin’s finches and the hermetically-sealed wildlife exist on these islands like no other place on the planet. The Galapagos were not on my bucket list.  As a professional traveler, I visit many interesting, remote and wild places on the globe, so places that are high on many lists I generally avoid, often mistakenly (though occasionally correctly) believing them to be overrated, overcrowded and underwhelming.

Regardless, here I was in a small craft headed for Baltra. one of the two islands that has an airstrip.  Being in Ecuador already, it seemed a kind of arrogant insanity to miss the Galapagos. We landed, went through immigration, and 20 minutes later were on a boat headed for a scuba dive.

And then it was crystal-blue-clear why people come to the Galapagos! Until you get under the surface (literally in this case), you can’t see nor understand the astonishing beauty. If we allow, we can be yanked into another reality.

I stared at a nine-foot hammerhead shark swimming softly by, looming and circling, eyes both cat-like and stony. My heart pounded at the sight of white-tip sharks and a shimmering school of barracuda, numbering in the hundreds. A Pacific Green Sea Turtle calmly slid under us with a sidelong glance.  Scores of needlefish, puffers and a thousand other colorful specimens caused a stir. I’m only used to such scenes accompanied by music — frightening, lovely, ominous — and a narrator.  The real background sounds of muted popping, pinging,  and swooshing brings you deeper into the experience.

Post-dive, we sped across Isla Santa Cruz in a little pickup truck at dusk, giving us a kaleidoscopic view of the island’s diverse climes — desert, jungle, coastal. We left the windows down, letting the dry hot air blow our hair into messes.

Eventually we rolled into the somnolent town of Puerto Ayora.  A big sea lion on a town dock shared space with the locals. People walked within two feet of the creature. “Lazy Bunda!” (lazy butt) exclaimed a traveling Brazilian, creating laughs and a perfect bilingual term for the languorous, flopped, yawning, yorking sea lion, clearly bored by our very presence. That night we consumed delectable fish, vegetables and beer on our ship and enjoyed the sunset with drink in hand — an equatorial nod to the famous African sundowner. 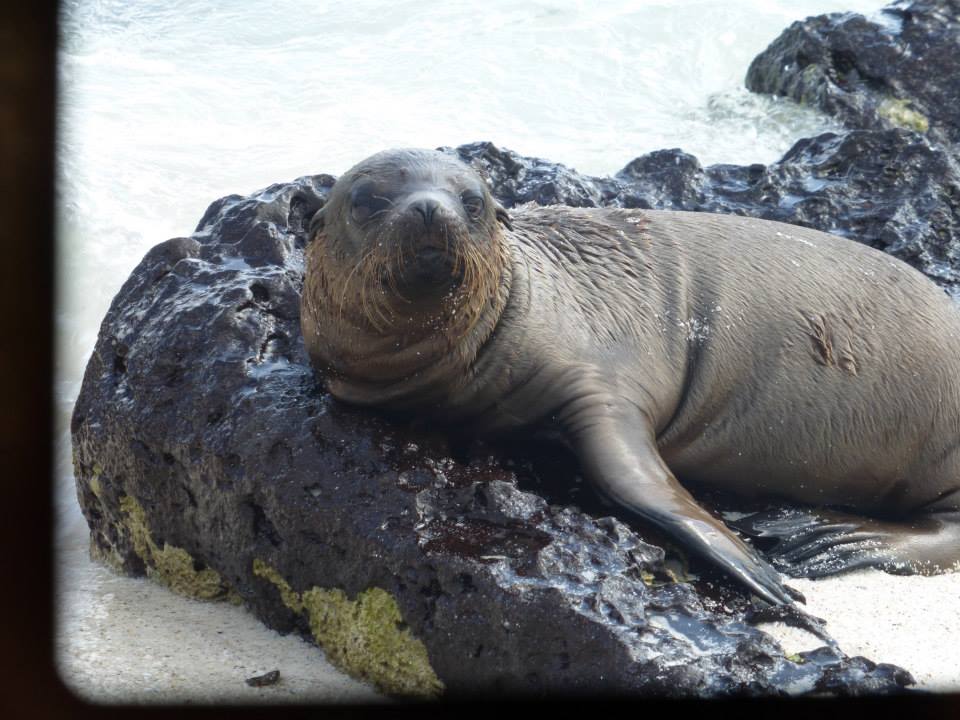 Seals the deal: They’re everywhere, and they leave you alone if you leave them alone, which clearly this photographer has not***ATTA***

The Galapagos have what you would expect to see, gorgeous bays with every imaginable tint of blue and green — even when the sky was gray, confounding the conventional wisdom of water reflecting the color of the sky.  One blindingly bright morning a bird that had a green underside and white body flapped by, then suddenly, as it gained altitude and distance from the water, it was completely white.

Not everyone is a convert. Herman Melville (of Moby Dick fame) described the Galapagos as “The Encantadas” in ten sketches, a strange hybrid of travel, fiction and mystic writing that appeared in 1854 in Putnam’s under the pen name Salvator R. Tarnmoor. And he wasn’t kind:

“Take five and twenty heaps of cinders dumped here and there in an outside city lot; imagine some of them magnified into mountains… looking much as the world at large might, after a penal conflagration. It is to be doubted whether any spot of earth can, in desolateness, furnish a parallel to this group.”

He wasn’t done: “Little but reptile life is here found: tortoises, lizards, immense spiders, snakes and that strangest anomaly of outlandish nature, the aguano. No voice, no low, no howl is heard; the chief sound of life here is a hiss.”

Melville never saw the underworld of the Galapagos. At first blush, the surface can be bleak. There doesn’t appear to be a lot going on. One must listen and be still and observe — and go underwater. (Not as popular an option in the 1850s.)

But we waded in waters flush with stingrays the size of couch pillows. We watched clownishly red, blue and yellow crabs scuttle and leap off rocks, watched flamingos stilt around a swamp and penguins tool around.

Snorkeling in Devil’s Crown, a jagged circular island shattered in the middle, like a craggy giant donut, allowed for every boy’s fantasy of seeing sharks in an underwater cave. “Now we have to swim through sharks in an underwater cave while holding our breath to come up on the other side!” the guide cheerily informed us, before doing just that. And there was something about not making any sudden movements. Is full-body shuddering panic considered a sudden movement? 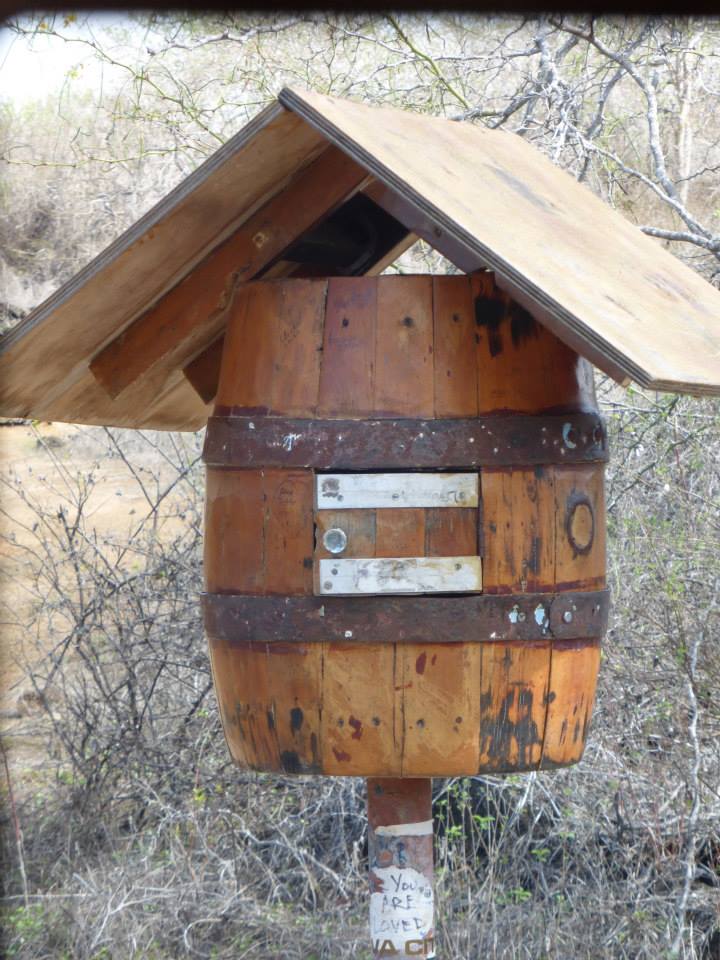 Then a vivid lesson came from an unexpected source: the Floreana Island Postal Barrel.

In the late 1700s, British sailors put a wooden barrel on shore (now named Post Office Bay) as a location for passers-thru to post messages and mail for homeward-bound sailors to pick up and deliver. During the war of 1812, US Navy Captain Porter found the barrel, read the letters and deduced where British whalers might be located.  He captured several of the ships and confiscated their valuable whale-oil cargo.

Today the barrel is used by travelers sending messages to friends and family around the world.  The tradition continues, though, of not using postage.  As a tourist, you can go through the list of addressed letters and postcards and if someone lives near you, you can hand-deliver the letter.

As our group baked in the hot sun and perused the letters to determine if we could be global mail carriers, we became interested in the open postcards and read a few.

A wag from the UK: “Definitely the place to travel to see big boobies!”

A beautiful, intricate drawing of trees and mountains accompanied by Spanish: “Espero que cuanda reciba esta carte ya pueda di bujar major.  Exitos!” (“I hope that when you get this card I (or you) can draw better. Wishing you success!”)

A card read across the top in bold: DO NOT DELIVER! (for a friend to come and pick it up on their next trip through Galapagos) and continued enigmatically: “BR- if you get this you have to dive and secretly bring home a baby sea lion.  A FAT ONE.  I hope you’re still awesome.  If not, designate a corner to mull over your actions!” Signed, NR

From a child, written in red and blue markers: “The Galapagos Islands…. Where the sea lions play and blue footed boobies dance all day….” Accompanied by drawings of said boobies and sea lions. 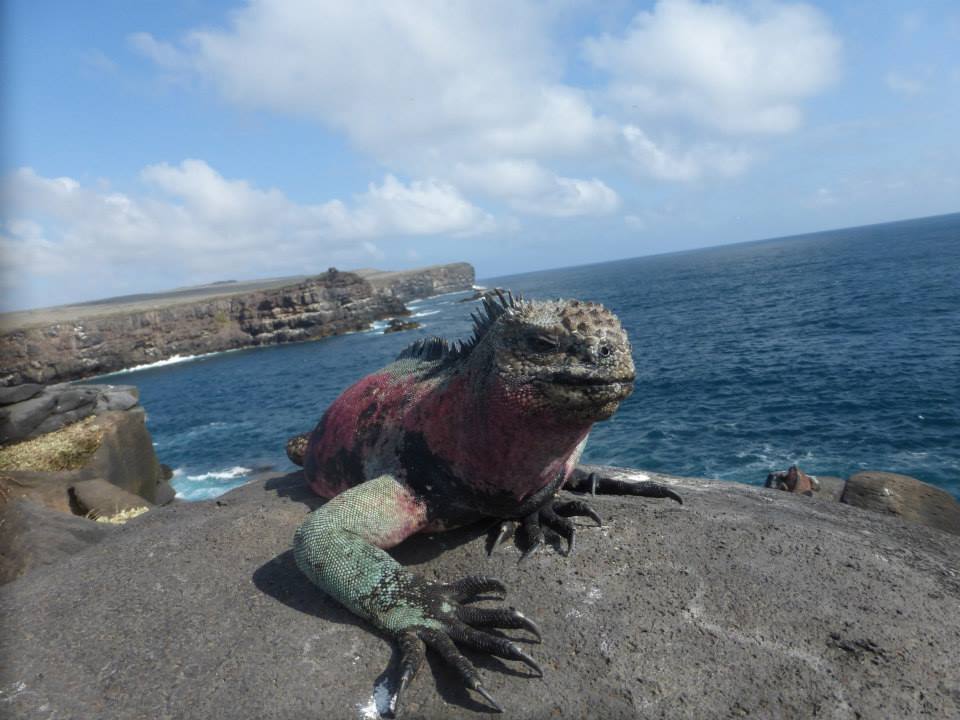 There might be dragons: In this case, an iguana, but, you know, with a little imagination…

A posting by a local: “Looking for a husband!  My soulmate is somewhere around this island!  Can’t wait to meet you!” Beka, accompanied by a decidedly more modern email address.

A message from someone patient: “Dear fellow Jordanian, I’m not expecting to get this back anytime soon since there are very few of us who are prepared to travel the distance!  So, if you ever get this, ring me so we can talk about Paradise!”  Omar Al-S, accompanied by no less than six phone numbers.

From an American, a crisp, cynical postcard: “Doubt you will ever get this.  We are mailing it from a barrel on a beach.”

Another one from the campaigning Beka: “Do you want to live in the Galapagos?  Marry me and live here.”

There were postcards in English, Cyrillic, Portuguese, Mandarin, Arabic and numerous other languages.  A kaleidoscope of traveling humanity passing through the Encantadas.

Then came the letter with a note at the top that said Dec. 2012. Please leave on Floreana which left me crushed: “Dear Chris, You will never be able to receive or pick up this card but you have been with me, in my heart, on this trip. Forever missed, Love Dad”

I placed the letters back in the barrel, and sat in shimmering, heat-abating shade and listened to the birds, to the waves, to the distant tittering of swimmers from our group and imagined the father calmly and tearily writing a letter of agony in the middle of the Pacific Ocean. Letting go a little bit, every time he could.  What better place than in the swirling roaring silence of blue water and deserted land could one place their pain and let it go?

For a moment the Galapagos felt much like Melville’s cinder-filled deserted land and then the birds interrupted again, bringing me back to life. 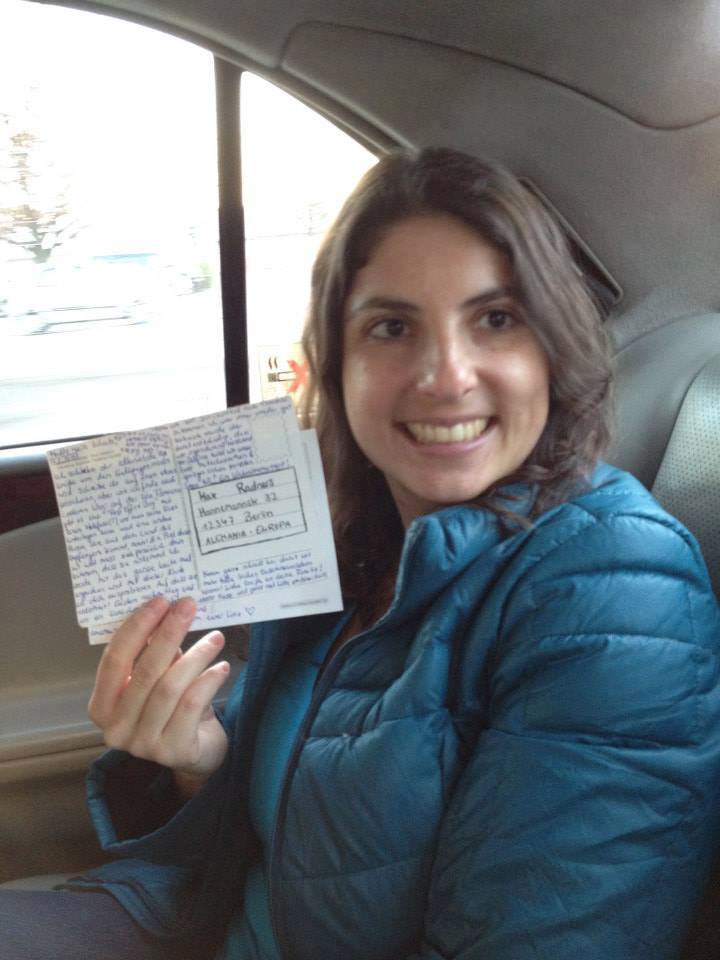 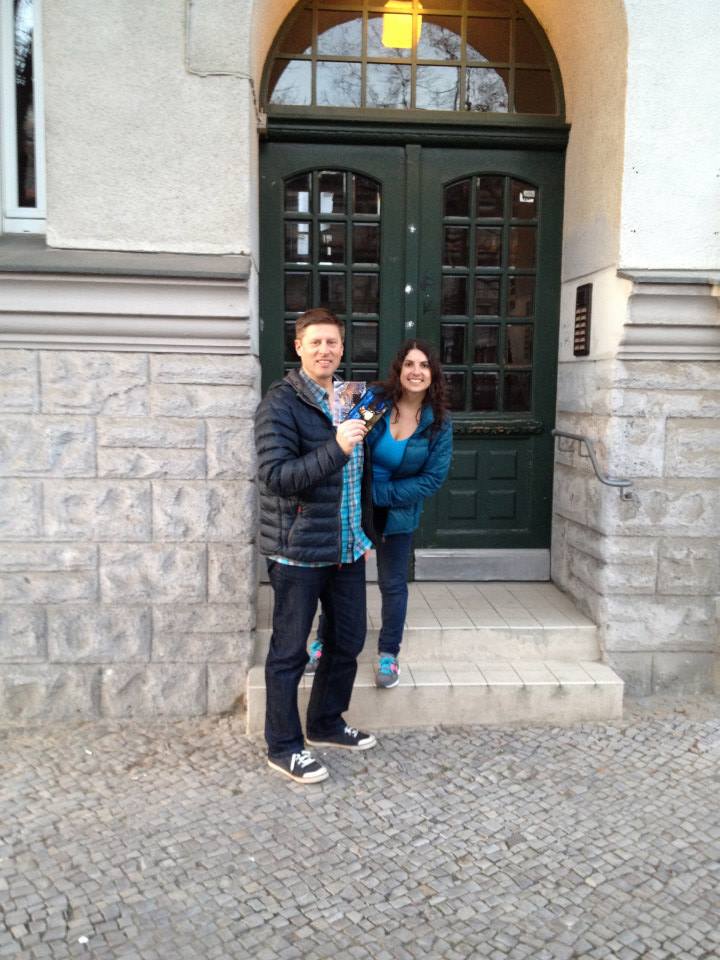 Top: My wife Gabi in the back of the cab we used to hand deliver mail in Berlin. Bottom: Us outside the address

PS  When we saw that there was mail addressed to people in Berlin, and knew we’d be going there, we decided to be the ones to hand deliver them (the tradition with this barrel)!  Our cab driver became so enamored of the story that he stopped his meter and even translated for us to the families! One had us in for tea. 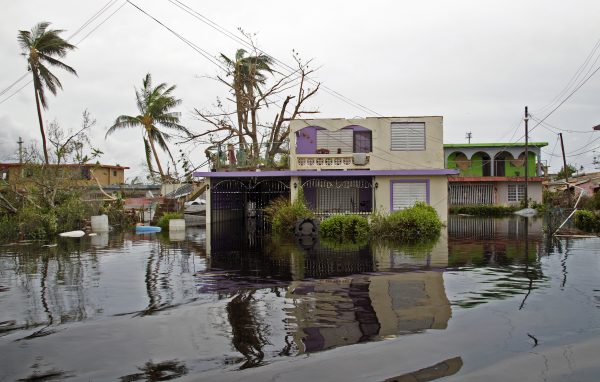