If you seek un-fine art, look no further than Boston’s quirkily refreshing Museum Of Bad Art, featuring paintings from a kind of Alternate Reality.

MOBA calls itself a “community-based, private institution dedicated to the collection, preservation, exhibition and celebration of bad art in all its forms and in all its glory.” They display all that glory in three Boston area venues. (See below for details.)

Louise Reilly Sacco, Permanent Acting Interim Executive Director – real title – explains that MOBA was accidentally founded in 1993 when her brother Jerry plucked a truly dreadful painting from a curbside trash bin. In a flash he realized he had stumbled upon “Art too bad to be ignored” – now the Museum’s official motto. 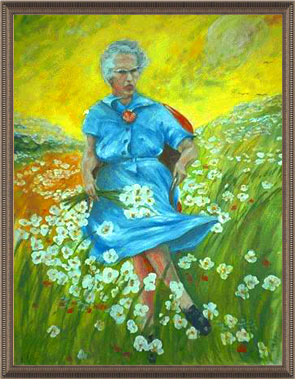 Lucy in the Sky with Flowers, acquired from the trash. Looks a bit like Mark Twain in drag…. ***MOBA***

Jerry cleaned it up and mounted it on his basement wall. He was hooked. When his collection had grown to 20 bad pieces, he sprayed the wall white, installed artsy lighting and invited 50 friends for what he planned as a one-time “happening.” By evening’s end the crowd had grown to about 200, attracted by word of mouth.

MOBA’s public opening in 1994, their first non-residential gallery, was in the basement of the Dedham Community Theater, built in 1921. But they were once again in a basement, just outside the men’s room.

Louise notes, “It took off because nobody else was doing what we were doing.”

And what were they doing? They were giving people permission to like or dislike art based on what they really felt and thought – not what “art experts” told them to feel or think. Louise knew the Museum was a hit the day a busload of seniors pulled up in front. MOBA had become a tourist attraction!

The founding visionaries were not “art people.” Louise explains, “There is no established career path in the field of bad art museum management. Our founders were a software engineer, a film director, an antique dealer, a photographer and a business consultant. Our current curator was a musician.”

Since the modest beginning in Jerry’s basement the collection has grown to nearly 600 pieces. Due to space limitations, only 20 to 40 are on view at each location. But they refresh exhibitions often, so return visitors can usually see new work. Hangings are accompanied by witty commentary from MOBA “interpretators.” Yes, they use that word. It’s their word, and we think it is a fine word.

There is a sample gallery at http://museum-of-bad-art.culturalspot.org/home  and hilarious short videos by Curator-in-Chief Michael Frank are posted on http://www.youtube.com/user/MOBAcurator . Here paintings are shown, described and “interpretated” against a musical background.

Offers of collaboration come from museums here and abroad, but so far no ongoing partnerships have resulted. Many inquire; few offer funding. There have been several one-time exhibits and “road shows.” One Taiwanese event promotion company spent $30,000 to fly in artworks (and Curator-in-Chief Michael Frank) for an exhibition.

One unexpected offer came from the Moab Arts Commission in Utah. Who could possibly resist the concept “MOBA at MOAB”? – possibly history’s only anagram-based art exhibit!

Hundreds of academic papers have been written on MOBA, and not always by art majors.

A piece in MOBA’s collection, from on their most excellent Facebook page, which you should follow immediately. The Curatorial Staff makes the slightly harsh suggestion that maybe painters of nudes in their collection have never actually seen a naked person.***MOBA***

In 2008 the flagship gallery in Dedham relocated to Somerville – also in a theater basement (do you see a pattern here?), where MOBA merchandise is on sale. Their website notes, puckishly but helpfully, that the collection is “convenient to the rest rooms.” Admission is free for those who buy tickets to movies or concerts upstairs. They also offer free passes.

They do not, however, sell their paintings, and have had to deal with theft. Oddly, this didn’t make the papers.

“From time to time people inquire about purchasing pieces, and we politely decline their offers,” says Michael Frank. “Like any other museum we occasionally decide to de-acquisition pieces from the collection, but we are not running a flea market. We do occasionally raise money for MOBA (and charities) by auctioning pieces from the Rejection Collection: pieces that have been donated but not accepted into the Permanent Collection. 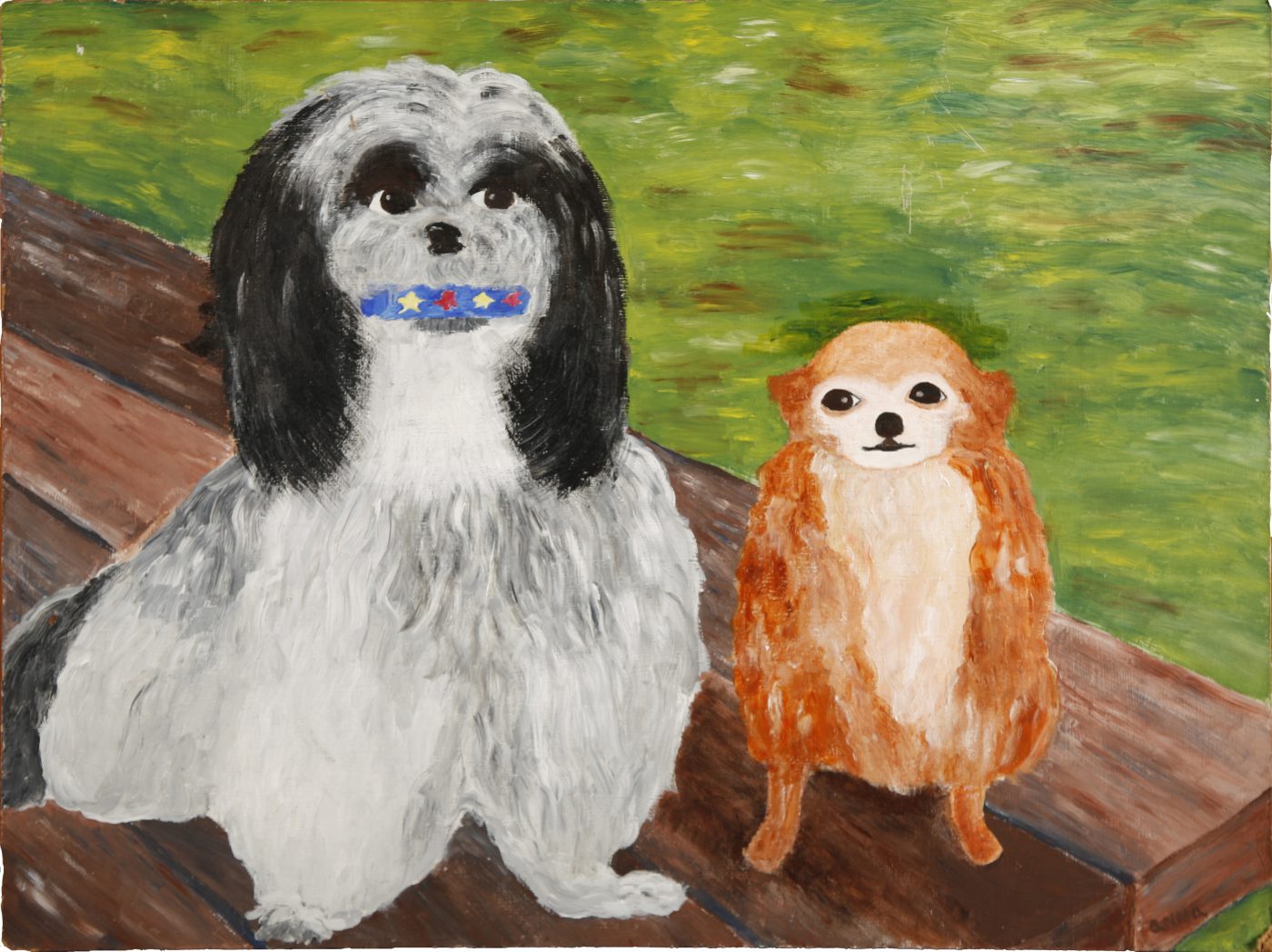 “There was an incident where someone took a painting from the wall and left a note saying we must pay a ransom to get the painting back. We did not pay, and the painting was eventually returned with a $10 bill attached. The lesson learned was to not negotiate with terrorists.

“There have been, unfortunately, a number of other works stolen from our galleries. The lesson learned was to NOT display small items that can easily be concealed.”

Their free entry policy is in sharp contrast to most museums. As Michael Frank told us, “I have recently returned from Barcelona, where the curators at the Joan Miró Foundation are able to charge very high entrance fees to their museum featuring many paintings that would be entirely appropriate for our collection.”

The Miró is world famous. But even famous artists can make bad art. Mike continued: “We collect art that has been created in an attempt to make an artistic statement, but … something has gone horribly wrong.”

MOBA is not into kitsch. Louise says,  “Our interest is not in work that was intended to be on the wrong side of good taste standards.”

How does the Good Taste Community view Museum Of Bad Art? Despite certain “irony-impaired people who don’t get it,” Louise reports that “Artists, more than any other group, get what we are doing and embrace it.”

Surprisingly, artists occasionally submit their own works, presumably hoping that “something that didn’t work out would still find an audience and bring some notoriety to the artist,” says Louise.

Picasso – no stranger to notoriety – once said, “Art washes away from the soul the dust of everyday life.” If so, a visit to this museum is a delightfully unexpected way to wash away your own soul-dust. Well worth the trip! 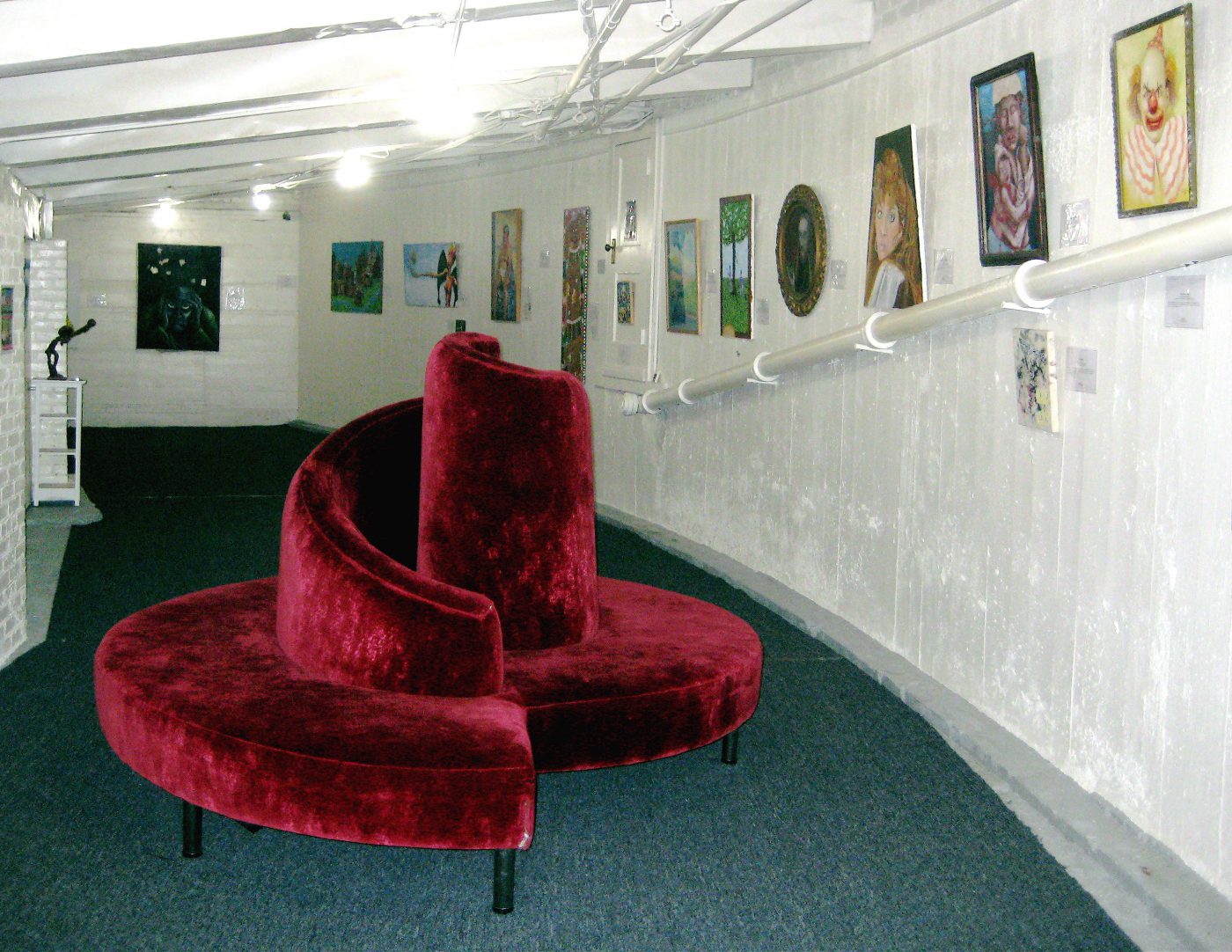 Basement of the Somerville Theater, 55 Davis Square, Somerville, open when films are running. Admission is free with a movie ticket or you can request a free pass from Info@MuseumOfBadArt.org. “Just tell us how many people will be coming. This is our largest venue.” says Louise.

Other ways to see lots of MOBA art — and you will want to — are:

This old Inn is spectacularly good, quaint and mostly only known to locals

Optimism is cautiously poking its nose through the covid gloom, and new places are opening and old favorites re-opening