Arnie Weissmann, the Editor of Travel Weekly, the leading and most influential trade publication for the travel business, was that kid, way back in the way back, a skinny, wide-eyed, fearless back packer traveling the world rather than crossing the quad. He wound up in the most wonderful places, and he wound up in the most glorious shit, from which he providentially and sometimes improbably survived.

More accurately, in between sometimes crossing the quad, he criss-crossed the globe. After college, fittingly fulfilling an obvious destiny, he became a travel journalist. Then he launched Weissmann Travel Reports, a series of country-specific guides for travel agents, a first for the industry, about every country in the world. Eventually he sold this for ten billion dollars — it may have been less, now I think about it, since I am just guessing — and Providence’s Wheel, which has always been fond of him, eventually spun him into the top job at Travel Weekly.

From there, in more comfort and style than on his first adventures, he has returned to many wonderous places, from deserts to rainforests to teeming far away cities, and been to most of the rest of the spots he never got to before. By now he has visited, “give or take” he says, 120 countries. Most people can’t name 120 countries…

He says he still loves traveling, and to prove the point has been halfway around the globe since we started this interview, and completed it from Antartica. “I’m excited on the ride to the airport, always, even if it’s just for a 90-minute flight to Chicago. Which touches on something important: ‘Traveling’ does not begin only after your flight touches down – anticipation on the front end and recall afterwards accounts for a healthy portion of a trip’s value,” he says.

As you might expect from someone who wants to go to 120 countries, he loves food and has experienced a fantastic array of cuisines. His favorite is Mexican. “Then Lebanese. Or I should say British Lebanese immigrant cuisine. I haven’t been to Lebanon, but have sampled from the menus of a dozen restaurants in the Lebanese community near Marble Arch in London. Fantastic.”

Let’s clear this up right away, you have a thing for cemeteries when you travel. Why?

I do. And not just the ones with famous inhabitants. Cemeteries provide an entry point for a hyperlocal, unfiltered view of a culture. They’re as good or better than any open-air museum I’ve been to. Sculpture and poetry are everywhere, and portraiture –either embedded in a tombstone or framed and left by a mourner – in particular evoke an emotional response from me.

Although there may be themes that recur in funerial art, it’s often the totality that stirs me. You can find tableaus made of tokens of remembrance; highly personal and lyrical inscriptions etched on stone; family crypts where you can trace the lines, and intersecting lines, and broken lines, of clans and dynasties. These can connect you to a local community like no attraction, restaurant, beach or market possibly could.

I have two favorites. The first is in in Sapanta, Romania,  a small village in the Maramures Mountains in Transylvania, where the grave markers are carved from wood and painted. On one side is a poem – often humorous – and on the other an image of the deceased. (If the person died a violent death, that’s depicted as well.) After the carver died, the craft was taken up by his son. The older, weathered markers look like they could have drawn by Edward Gorey. It’s hours away from anything else you might want to see, but you’ll spend hours walking the rows. I understand that, after I saw it in 1989, it has been designated as a museum.

My other favorite is in the town of Avatoru on Rangiroa atoll in French Polynesia. As in many cemeteries, it wasn’t hard to figure who among the buried were wealthy and who may have been indigent. I saw an image there that stays with me: The handwritten epithet “Ici repose ami Lucien” (“Here lies friend Lucien”) on a piece of wood. How can you look at that and not wonder about the lives of both the mourner and departed? 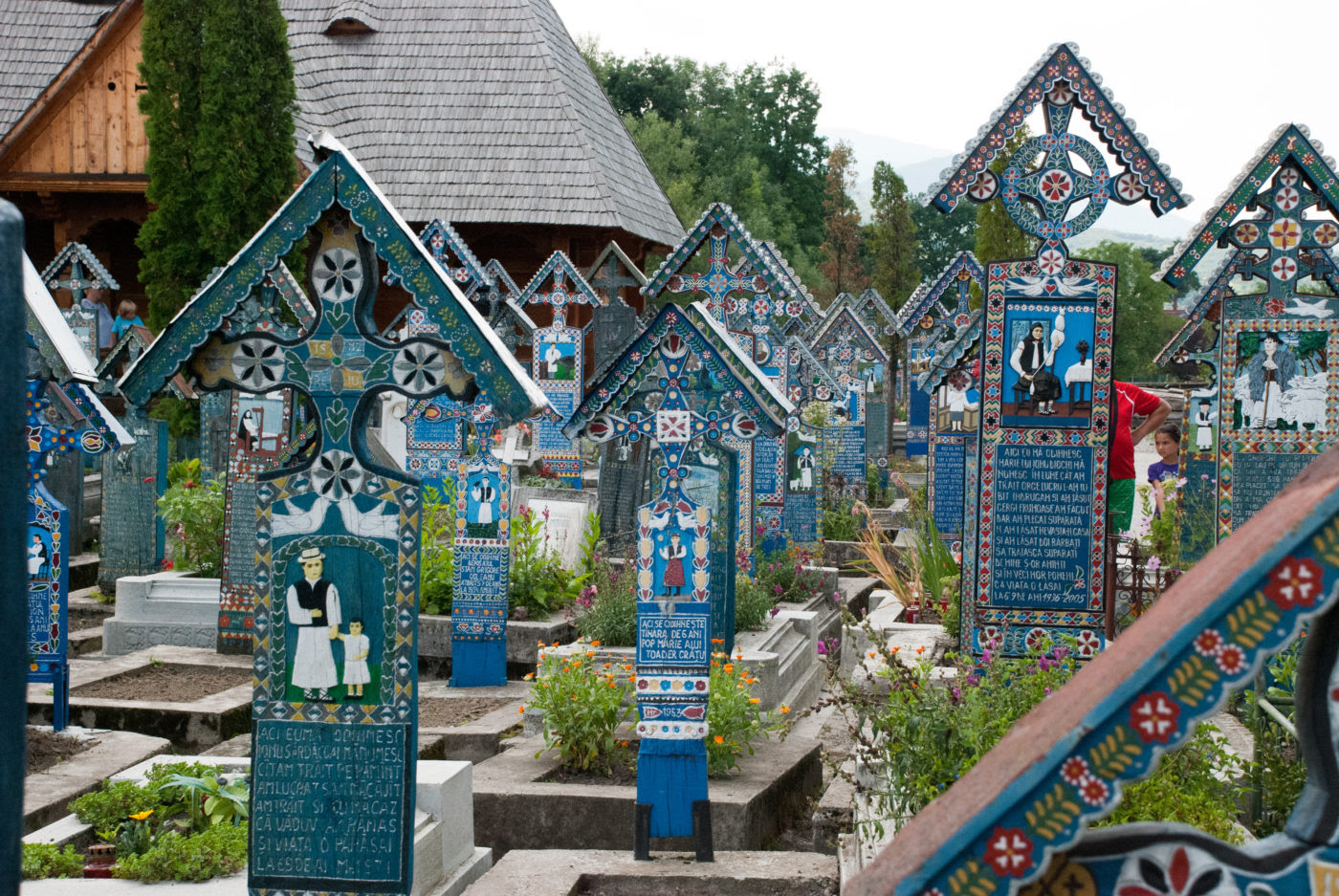 The Cemetery in Sapanta, Romania. If the graves could talk… well, these do!

What’s the worst hotel you’ve ever stayed in?

I don’t know that I’ve been to one that absolutely failed on all counts, but there are some common practices that simply baffle me and leave me wondering if some hotel designers have ever actually stayed at a hotel.

It seems intuitive that a hotel bath towel should be within arm’s reach of the shower, no? But they’re often on the other side of the bathroom, stacked beneath hand towels and wash cloths.

And the room safes: It’s more than past time to replace the ones designed to hold only a gentlemen’s cufflinks and ladies’ earrings. And if you install one big enough for my laptop, please position it horizontally.

Keep lobbies on the ground floor! I know it’s more profitable to put some retail on the bottom floor, but, you’re a hotel.

Who is the most remarkable person you’ve met in your travels?

Fateh Singh Rathore. When I met him in 1984, he was superintendent of Ranthambore National Park in Rajasthan, India. His life was dedicated to tigers, and he risked his life protecting them. The tigers were not a danger to him — it was the local farmers who coveted the park’s land, and regularly tried to infringe upon it.

He was attacked and almost beaten to death by them; when he recovered, he doubled his efforts to keep trespassers out. As a result, the tiger population there thrived. A fascinating raconteur, he took pity on me as a poor backpacker and let me spend a few days with him touring the park in his jeep and sharing his immense knowledge about these beautiful cats. Sadly, he has since passed away.

Where was your soul most at peace?

It’s more about time than place. I’m really only fully at peace when I don’t have a commitment to be anywhere at a specific time while traveling. (That’s true luxury; how much one pays is irrelevant.) When in my 20s, I saved money for seven years so I could backpack around the world for a year and a half — without an itinerary. I’d end up somewhere and stay there until I was satisfied I’d seen all that I wanted to see, and only then would move on. On that trip, I got happily stuck in Kashmir for six weeks — the Golden Temple in Amritsar, Punjab had just been stormed  by Indira Gandhi’s forces, and the rail and road connections I would need to return had been closed.

There were protests and drama in the Kashmir’s capital, Srinagar, as well – I saw riots, heard gunfire and almost got clubbed by an Indian soldier – but I spent most of the time happily sequestered on a houseboat on Dal Lake, reading 20-year-old Time magazines, writing in my journal and watching the shikaras drift by, selling fresh fruit and flowers. 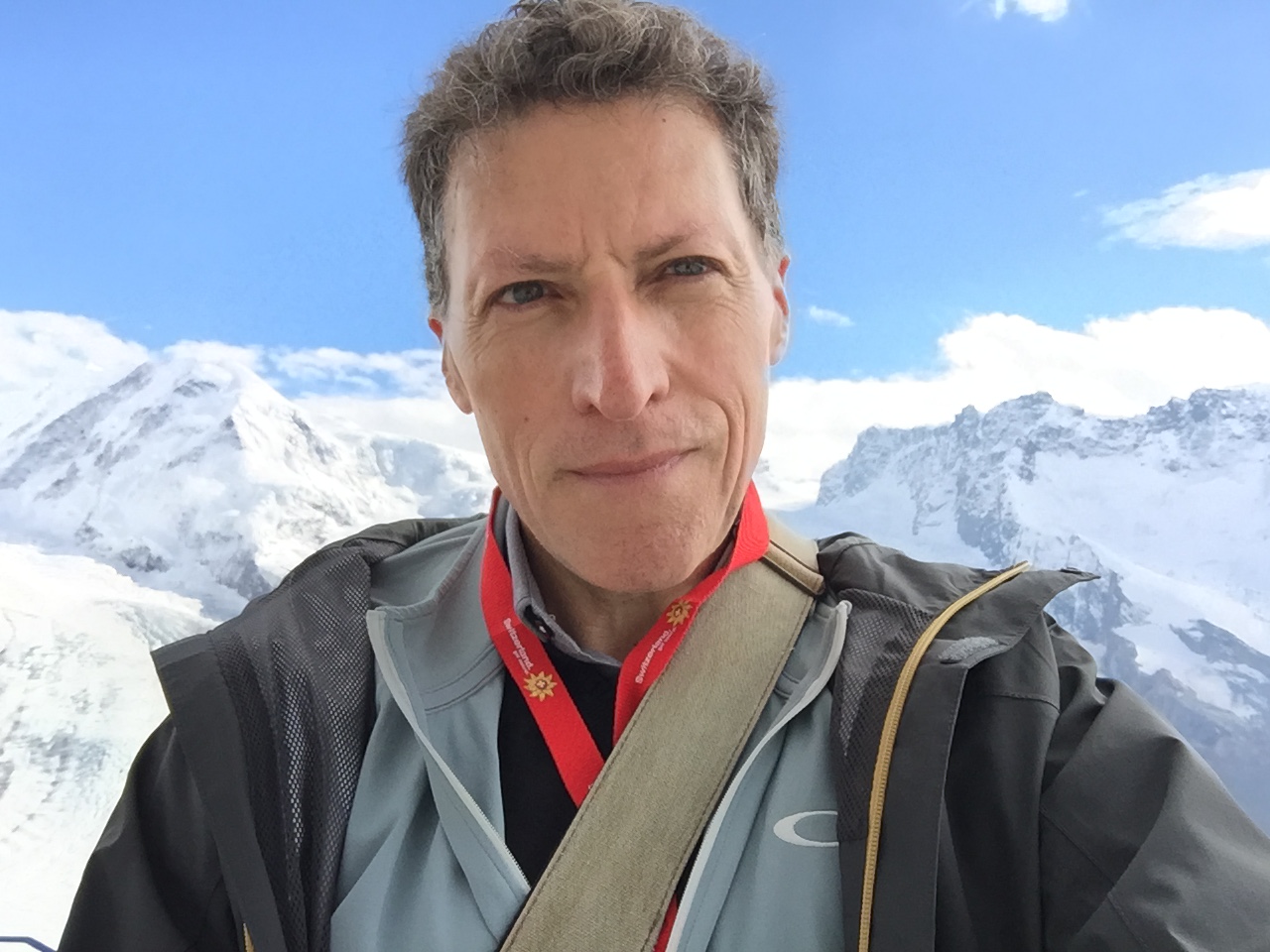 To get to his office in downtown Manhattan every morning, Weissmann crosses the Swiss Alps. For the exercise

What place most took your breath away?

The view from the top of the 1,250-foot Big Daddy dune in Namib-Naukluft National Park of Namibia, overlooking the white Deadvlei salt pan, which is dotted with thousand-year-old preserved camelthorn acacia trees. That magnificent view was followed by an exhilarating run down the face of the dune, the sandy footing so awkward and unpredictable that I laughed the entire way as I stumbled down. It’s one of the most beautiful, surreal views on earth, followed by an activity I think is one of the most fun things a human being can do.

Impossible question number one: what was your favorite trip?

The aforementioned year-and-half trip around the world. Changed my life. Everything since has flowed from that.

Impossible question number two: Where’s your favorite place to go in the world?

Somewhere I haven’t been. And again, time enters into the equation. For 15 years, I had a quick answer to this question: Kathmandu. When I was there, it was wonderous — you’d walk down the street and see a shop, then a temple, then a statue just rising out of the ground, then a bigger temple, etc., etc., etc. But after 15 years, when I said, “Kathmandu,” someone said, “Really?” and then told me about their recent trip, which sounded like a very different place indeed – densely populated, people hassling you as you walked down the street, a king widely viewed as repressive.

That viewpoint was confirmed by others. So, when I say “somewhere I haven’t been,” it could be a place that has changed so dramatically that it is again new. Beijing 1984 vs. 1991 vs. 2004 vs. 2015 is a perfect example. China is filled with perfect examples.

Coming and going, airports are invariably the least pleasant part of any trip. But do you have a favorite airport in the world?

The Air Marine Terminal at La Guardia. I like ‘em small, and this terminal (also known as Terminal A) is both small and has incredible Deco art.

I sometimes feel quite out of step with the general climate of opinion on this. When they announced, to great acclaim, the expansion of LaGuardia terminals B, C and D, my heart sank. Here was the perfect anomaly, a compact airport serving the largest city in the US, and just 20 minutes from where I live. I could get to any gate in just 5 minutes once I was through security.

Runner up: City Airport in London.

Did you ever fall in mad, stupid love on one of your travels?

When I was 19, I dropped out of college for a year so I could work six months and then travel on the cheap in Europe for six months. The whole time I traveled, I was hoping to meet a girl, fall in love and travel with her. It didn’t happen. On the flight home (on what was then Icelandair), the girl sitting next to me was beautiful, fascinating, charming. We continued our conversation at the gate as we waited for the connecting flight. An announcement was made: The flight was oversold. They were looking for two volunteers to spend the night in Iceland and continue the following day. We looked at each other and raced together to the desk. They took our names. But before takeoff, they called our names and the gate agent said, “Good news. Some people didn’t show up, so you can board the flight after all.”

That said, every trip I take with my wife is enhanced by her presence. It’s like having four eyes instead of two — she sees things I simply can’t, and illuminates the world for me. I fall mad, stupid in love with her, again and again.

What was better, being the young, wide-eyed guy seeing the world, or the more sophisticated traveler you’ve become?

If you stretch “kid” to that trip when I was 19, there’s no question that early travels are the best. Everything is new and exciting. Nowadays, much of what I see feels like variations on themes already experienced.