What price would you pay to be a star? Pay for guitar lessons? Pay thousands to a production company to do the work for you? Or would you follow the footsteps of the blues master Robert Johnson, and sell your soul to the devil to be able to play some of those sweet, sweet blues?

Legend has it that as a young man Robert Johnson (who died in 1938, at the oddly infamous age for musicians of 27) began practicing guitar in the cemeteries of the Mississippi Delta with his teacher, Ike Zimmerman. They’d sit on a tombstone strumming the guitar in peace, as all their would-be critics were dead anyway. As time went on however, Johnson would dream of greater and greater fame until one fateful evening, as the story goes — perhaps the greatest music backstory ever — he was instructed to go to the crossroads in Clarksdale, where he met a large, mysterious black man who took his guitar and began to tune it. Once he was finished tuning the instrument, he asked Johnson what he’d pay to learn to play like him, as he started to strum incredibly beautiful tunes. Johnson, a poor sharecropper in Jim Crow Mississippi, offered all he had in the world — his soul. The man, being the Devil, happily obliged, returning the guitar to Johnson who began to play as well as the Devil himself.

Johnson recorded only 29 songs, over two years, but he inspired generations of blues and rock musicians, particularly Led Zeppelin, The Rolling Stones, Jimi Hendrix, Bob Dylan, The Allman Brothers and Eric Clapton. King of the Delta Blues Singers, a compilation of Johnson’s 29 recordings released in 1961, would eventually rank No. 27 on Rolling Stone’s 500 Greatest Albums of all-time. Some of Johnson’s most notable songs include “Ramblin’ on My Mind,” “Malted Milk” and “Milkcow’s Calf Blues”, which were all covered by Clapton on his 2004 album, Me and Mr. Johnson.

Clapton once described Johnson’s music as “the most powerful cry that I think you can find in the human voice.”

In addition to his complex way of singing, Johnson developed a playing style that made his guitar seem like an additional instrument, a method that B.B. King would later perfect. Keith Richards once questioned, “Who is the other guy playing with him?”  Richards came to realize that although he may have heard two guitars, there was only one — Johnson was the sole player.

For such a musical legend, you would think that there would be endless photos of Robert Johnson, however only two or three are known to exist. And one of those is disputed.

The crossroads themselves are a mystery. Johnson was known as a ramblin’ man so to find the exact location of this fabled point has perturbed and stumped both fans of Johnson, fans of the (musical) Devil and those looking to get their moment in the spotlight — i.e. a selfie. There are plenty of theories about where the crossroads are, from the intersection of Highways 61 and 49 in Clarksdale, Mississippi all the way to the location being in Memphis. Both Clarksdale and Memphis have tourist locations marking these supposed crossroads, while some claim the real crossroads are not marked at all, and are instead the intersection of Highways 1 and 8 in Rosedale, Mississippi, a town mentioned in his “Cross Roads Blues.”

But Clarksdale slightly edges the consensus, and there is plenty of someone’s blues soul there. 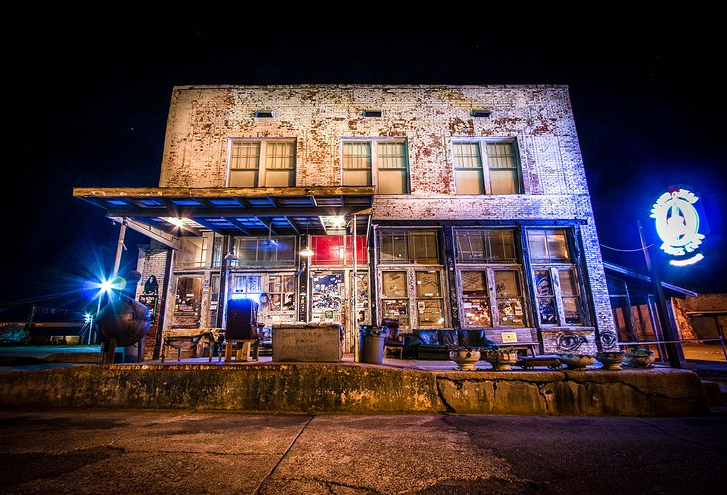 You could start at Morgan Freeman and Bill Luckett’s Ground Zero Blues Club, named such due to the belief that Clarksdale is ground zero for blues in America. It has great live blues bands, wonderful southern cooking and the Delta Blues Museum is actually next door. Plus, there are also ways to rent rooms from the Delta Cotton Company, which is tied to the Ground Zero Club.

Ground Zero has been ranked the number one blues bar in the nation. Around the corner is Red’s Lounge, a much older establishment and one of the few remaining, truly authentic juke joints in the Delta. Roger Stolle owns the Cat Head Blues Store in Clarksdale, which you should definitely check out. He is also the founder of the hugely successful annual Juke Joint Festival. The next one will take place April 13 and 14 of this year. 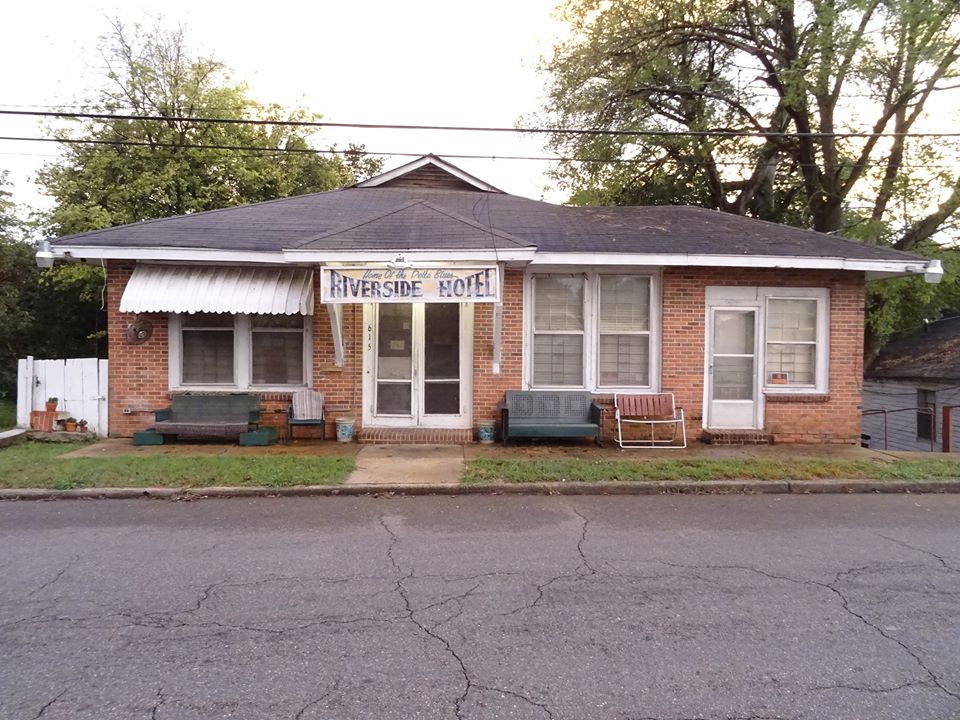 Nearby is the Riverside Hotel, an extraordinary landmark, open since 1944, and you can stay there today. It’s historic for being where black musicians stayed while playing on the Chitlin’ Circuit, since until well into the sixties there weren’t many hotels in Mississippi that allowed blacks. Many great artists stayed there, from Duke Ellington to Sam Cooke, James Brown, Sonny Boy Williamson and Ike Turner, who is said to have written “Rocket 88” there (see How Ike Turner Invented Rock ‘ n Roll). Long time owner, Frank “Rat” Ratliff, passed away in 2013, but when he was alive, you’d find him on a plastic chair outside, ready to give anyone who wanted it a tour of the mythical establishment. The hotel is now run by his daughter, Zelena “Zee” Ratliff. Before it was a hotel, it was the G. T. Thomas Hospital, where blues singer Bessie Smith died in 1937, after a car accident.

From there, follow the music down the backroads of the Mississippi Delta until you come to an intersection where there stands a large black man, tuning a guitar…

A hefty chunk of Robert Johnson’s music was never recorded; many more of his songs were only heard by patrons of some long forgotten juke joint in the Delta countryside. This was the tone of Johnson’s life, one of mystery and loss, and in his own time he would be outright forgotten. Even his grave has been a mystery for many years (only recently discovered).

A few years ago, Allan Hammons was attempting to raise enough funds to place a historical blues marker in Tutwiler, Mississippi to honor W.C. Handy, when he received a call from a rather generous donor, whose only request was to be present at the time of unveiling. The donor was Led Zeppelin’s Robert Plant, who approached Hammons with quite the challenge: Up to this point there had been three presumed grave sites for Robert Johnson, and Plant wished to pay his respects. If anyone would know where Johnson was buried, it would be Hammons, who had dedicated his life to the study of the blues. Hammons said yes, he would take him there. 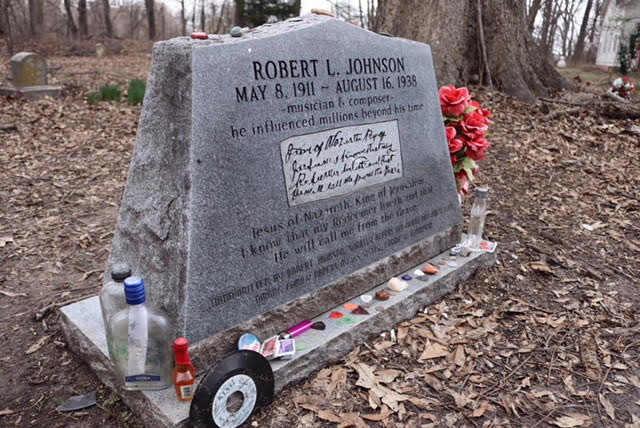 Hammons had found the real grave of Robert Johnson only a short time before. Up until that point people had known that Robert Johnson passed away at the Star of the West Plantation in Greenwood, Mississippi. However, two of the graves were a long ways away from this plantation and there were no clues as to which was the true resting place of Johnson until Hammons was approached by an elderly gentleman claiming to know someone who was there when they buried Johnson.

Her name was Rose, a 93-year-old woman who had been a chef at the Star of the West plantation during the time Johnson had come to visit. She began to tell Hammons how early one morning her husband, Rabbit, had come in claiming that there was a man who had just passed away, Robert Johnson. This being summertime in the pre-air conditioned south there was little time to waste handling the remains. However, Rose would go on to say that him being a bluesman, a profession associated with the Devil at the time, made it so that no one wanted a thing to do with him, lest they tarnish their own souls. However, that was no reason to deny a man a proper burial, she said, so Rabbit went to grab a pine box to inter Johnson’s remains.

“A little after noon,” she says, “a preacher committed his soul to the Earth.”

Having heard her firsthand account of the death of Johnson, Hammons asked if she could show him where it was. They followed her car all the way to Little Zion MB Church, just outside Greenwood on Money Road. Upon arriving, she set out from her car, walker in hand past the church to a large tree where she turned heel and said, “he’s right here.”

Hammons didn’t know he’d be walking down this same path a short time later,  having an “out of body experience” as he called it, hearing Plant singing Robert Johnson as he approached the grave. At the tree, Hammons told Plant this was where Johnson was buried, at which point Plant produced a note from his pocket that read: Traveling Riverside and the Lemon Song 1965.  Thank You! R. A. Plant, England.

Plant has long proclaimed he would never have been a musician had he not heard the immortal songs of Robert Johnson.

Click here for more from our series of Black History events 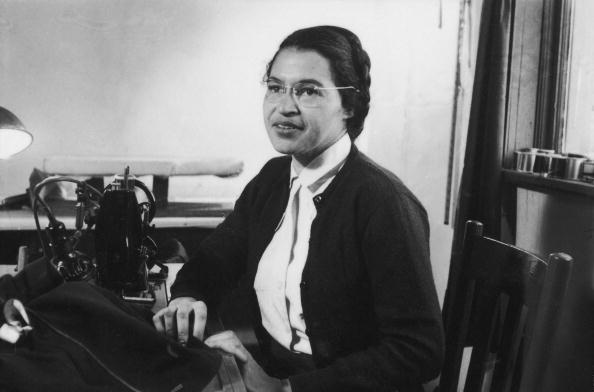