First thing you have to know about Dubuque is how to pronounce it. Otherwise when you go there you’ll be constantly checking yourself before you ask a local resident, “So how do you find life in…your city?” (It’s a serious question, too, along the lines of David Bowie’s plaintive query “Is there life on Mars?”) Say “Doo-byoook” rather than “Doo-boook” or whatever other weird sounds the French-derived place name causes you to make.

There was an actual Dubuque who was actually French, after which the city was named. Julien Dubuque, seeing as how you’re that curious. He did not pronounce his name Doo-byoook, but it’s unlikely he cares, having been dead for a couple centuries (he died in 1810, in case you care). Came down from Quebec looking for the area’s hitherto untapped sweet, sweet lead deposits, which took about a hundred years to completely exhaust.

At which point the Dubuquans (Dubuquians? Dubuqettes? Dubuoquois?) started cutting down all their trees for timber and became prosperous again until the trees were gone, at which point the city turned to mill-working and railroads and the automobile industry and a bunch of other stuff, most of which is now gone. Currently, the city’s largest source of income is from tourism. Yeah, I know. Tourism. What’s there to see in Dubuque, you’re asking yourself? To which I would reply, why are you talking to yourself? and then add one word: casinos.

Because Dubuque lies alongside the Mississippi River, it has a couple of riverboat casinos, the legality of which has always confused me. Something to do with allowing gambling on water but not on land, except the riverboat casinos in Dubuque that I saw did not look seaworthy. Wikipedia calls this “legal fiction,” which sounds a bit strident for something so frivolous.

Casinos bring people. And these gambling people can be, in another kind of legal fiction (I’m now not going to be able to stop using that term — good job, Internet!), referred to as “tourists.” I suppose. The bass player in our band (we were playing Dubuque that night, which is why I was in Dubuque; I do not as a rule visit out-of-the-way places for kicks and I will bet anyone that I am not a gambler) loves casinos with an unholy passion. Let’s call him Mike, because that’s a good name for a bass player, and also his real name, which is a nice coincidence. Mike’s a bit of a strange fish. He drinks non-alcoholic beers because although he quit drinking he loves the taste of beer. Nobody loves the taste of beer. Beer tastes like piss. You drink it to get drunk when there’s nothing better to drink. Also because it’s cheap. Unless you live in Portland, where the beer list comes on hand-printed scrolls that you have to unfurl over two or three tables to read. (Sidebar: why don’t microbrew pubs print their beer list on microfilm?).

Downtown Dubuque is a small place. You can easily walk from wherever you are to wherever you want to go, which is a nice feature in any city. Everywhere is somewhere you want to be. The excellent restaurant in our hotel, whose name I’ve completely forgotten, was a fifty yard walk from the venue we were playing. The venue was excellent. It had a bunch of different kinds of cider on tap, and if you know one thing about me, it’s probably not that I like a bunch of different ciders on tap. But it’s true! I like that. It makes me happy. The people at the club were really nice, the audience was enthusiastic, and the sound guy even said we could leave our equipment in the club overnight rather than having to load it out at 2 a.m., which nobody who’s taken advantage of a bunch of different ciders on tap wants to do. We were therefore able to walk back to our hotel, sleep in and saunter over at our leisure the next day to load the gear into our van, as God intended.

A mural by Gaia, a world-renowned artist

Turns out, how you find life in Dubuque is to go out drinking on Monday night and watch a rock band from California play. But that’s not the only place you can find life in Dubuque! When we went out in search of coffee the next morning, we were able to find with the help of friendly directions from native Dubuquers a spot in what seemed to be a run-down Victorian house, with no sign. You had to make a leap of faith, open the screen door and hope that no one was waiting inside with a shotgun in his or her lap like you see in the movies.

No shotgun, just very, very good coffee, which we drank in quantity. We were also hungry. It happens. But they didn’t serve breakfast, especially at one in the afternoon (which is early morning to a touring musician), so we were directed by several friendly, highly-caffeinated people speaking all at once to a diner a few blocks away, to which we hied ourselves with undignified haste (some of us were really hungry, due to over-consumption of on-tap ciders the previous night). The diner looked at first glance like every other non-chain diner you’ve ever eaten at in your life, but subtle differences quickly made themselves apparent. 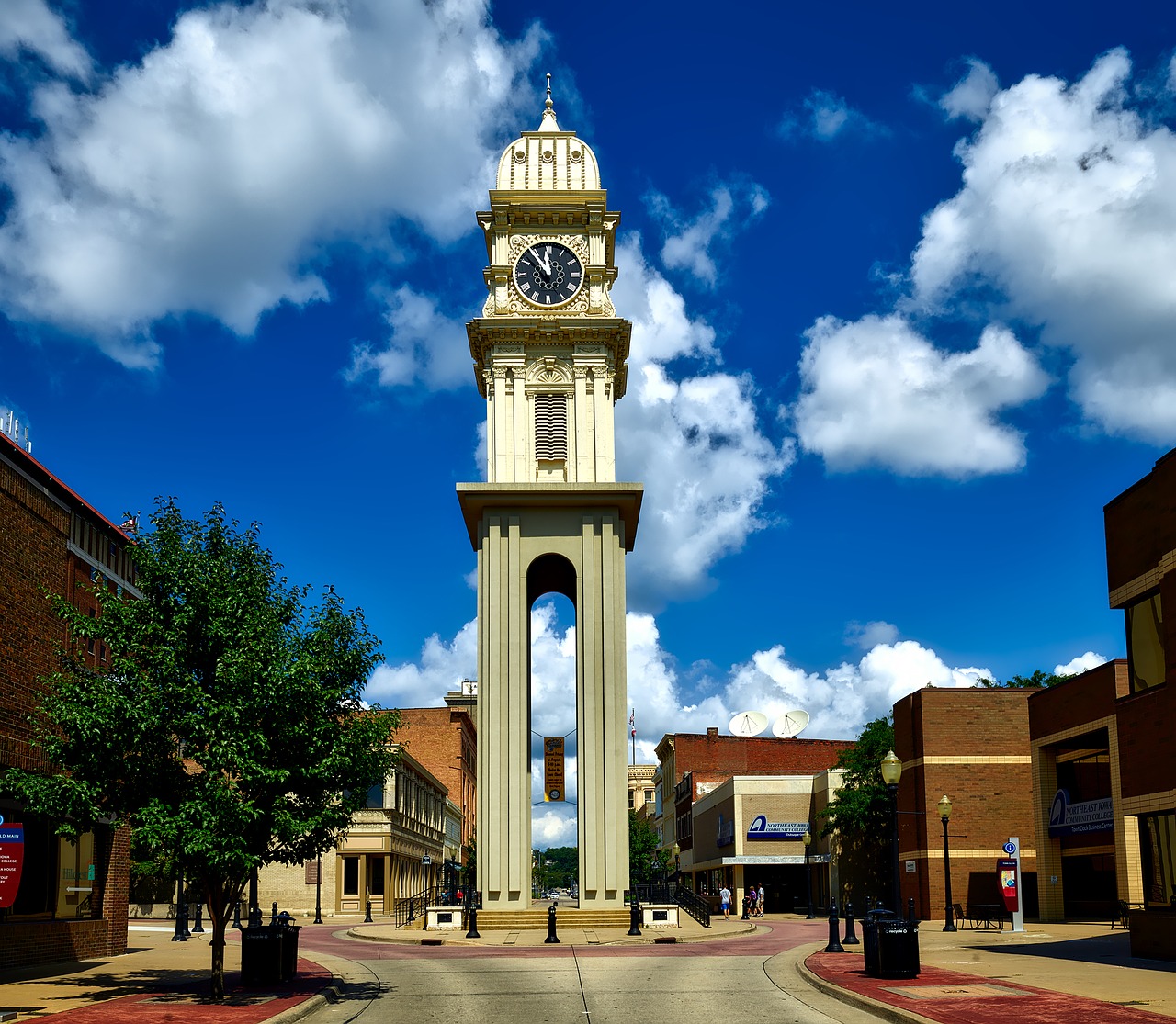 All along the clock tower…

First: Everyone was much, much friendlier than the usual crowd and waitstaff at a typical diner. This may be a byproduct of living in such a pleasant city, or it may be due to the fact that none of these people were human, but in fact cyborgs cleverly disguised as humans to lull us into complacency before taking over the world. There could be other options, too, but, you know, use your imagination. Second: When Mike tried to order some bizarre off-menu combination of foodstuffs, I was worried that things would quickly devolve into that scene from Five Easy Pieces where Jack Nicholson is rude because the waitress was rude, but instead, our waitress just nodded and smiled and replied “Honey, if we’ve got it back there in the kitchen we’ll make it for you.” Third: Average age of the clientele was about 153, judging from appearances, but that only proves that once you land in Dubuque, you want to stay in Dubuque, and then you never die. Either that or cyborgs.

We had to drag Mike from the diner into the van, because otherwise he, like the elderly clientele, would have stayed there for the rest of his life. He may be there right now, in fact. Nothing preventing him from going back now that we’re off tour. He might be there drinking O’Doul’s in the casino after winning fifty bucks at blackjack and then eating whatever he feels like eating at the diner whose name I really should have written down.

You may never find yourself in Dubuque. But should you be so lucky, you will have a hell of a good time. I’ll lay even odds on that.

A PLACE YOU WEREN’T THINKING ABOUT PORT TOWNSEND, WASHINGTON

Port Townsend is a magical spot on Washington’s Olympic Peninsula

Macau is one of the great gambling destinations in the world. But there’s a lot more to it than just casinos 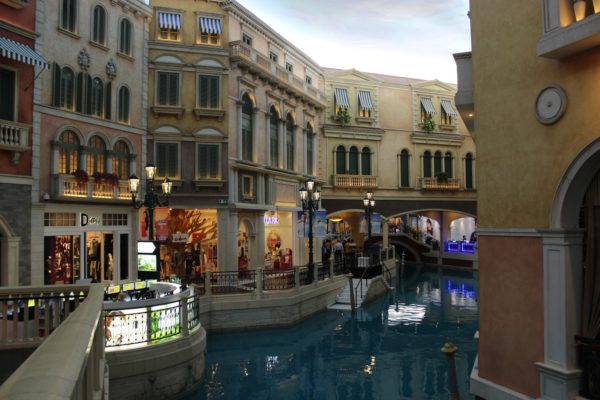 You don't have to go to Las Vegas to see fake Venetian canals. You can go to the Venetian Macau!***Henry_Wang/Pixabay***