Elizabeth Gilbert’s most famous travel story, her mega-bestselling Eat, Pray, Love took on a life of its own and became a cultural phenomenon, but she was already a strong contender for the title of Most Traveled Author. 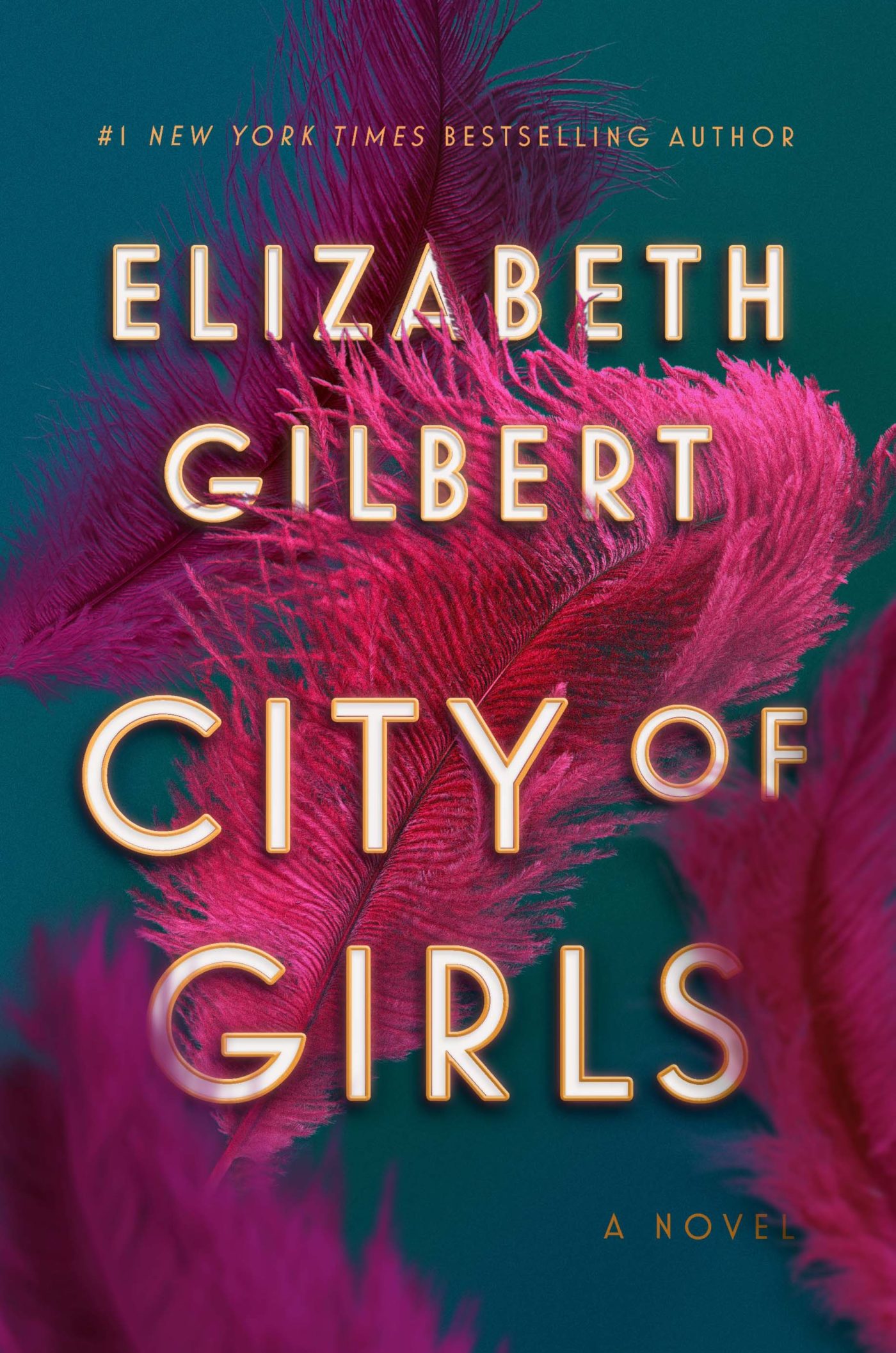 Starting as a staff writer for SPIN magazine in the early ‘90s, Liz has experienced a diverse range of places and things, from slinging drinks at New York City’s Coyote Ugly Saloon (her GQ story inspired another movie, Coyote Ugly, which tragically lead to an internationally famous chain of so-named bars), to chronicling the sad, deeply misogynist life of rodeo groupies, known as Buckle Bunnies, and the destruction of part of rural China to create more industrial China, both for SPIN. That was all before her life-changing Italy-to-India-to-Bali trip, and international fame and book tours for everything she’s published since, including her last work of fiction, the critically acclaimed bestseller The Signature of All Things.

This May in Budapest, she christened Avalon Waterways newest boat Envision as its “godmother”, cutting a rope attached to a bottle of Torley, Hungry’s star sparkling wine, that broke across the ship’s bow. (Now that’s literary fame, and how you christen a boat!)

On the eve of the release for her latest novel City of Girls, we asked her what thrills her, horrifies her and where she’d spend an obligation-free month, which, enigmatically, she thinks we’re paying for!

In City of Girls, Vivian Morris says, “A person only gets to move to New York City for the first time in her life once, and it’s a pretty big deal.” What was it like for you when you moved there the first time? 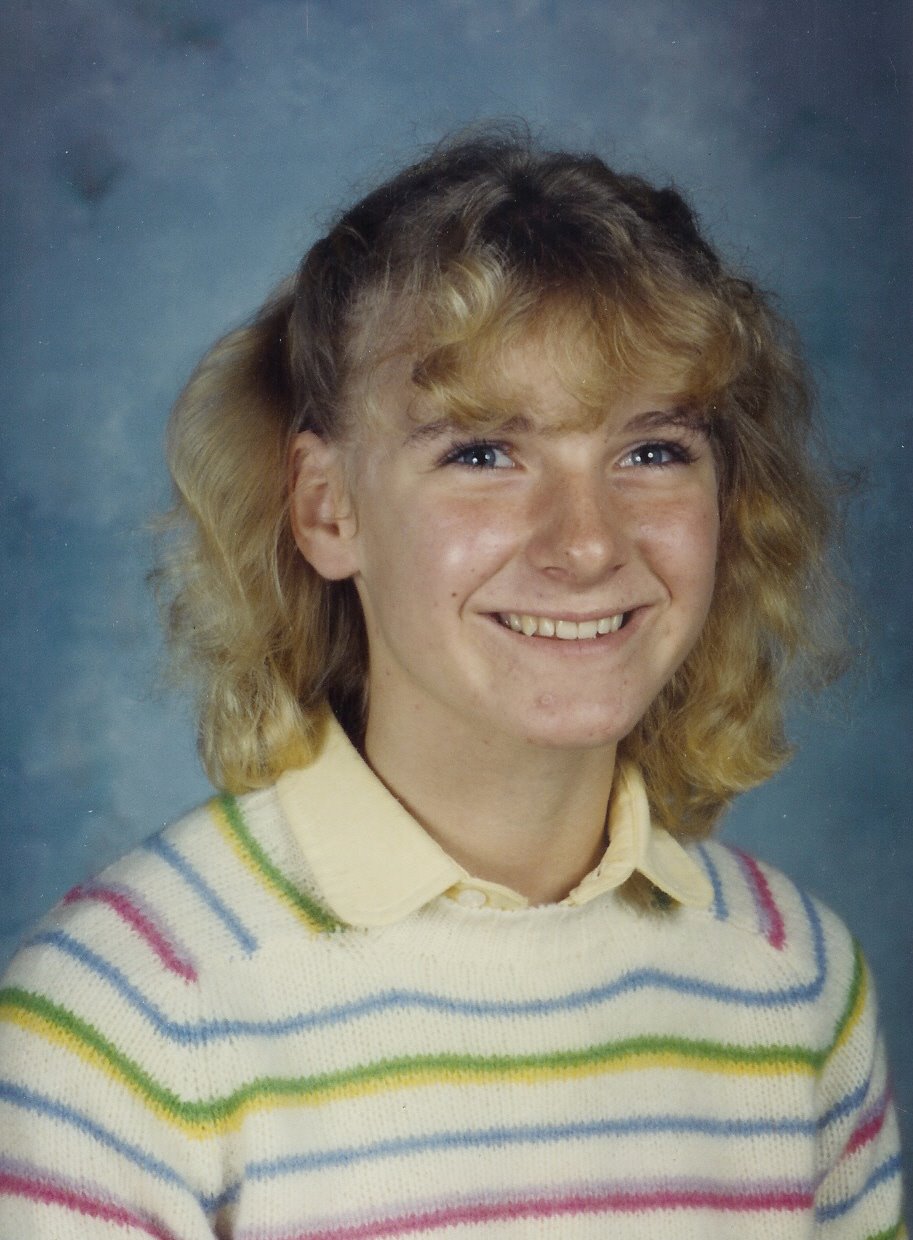 Portrait of the artist as a young girl, aged 13

I’ve actually moved to New York four times in my life, and I’ve been wild with excitement on each occasion…but nothing was more magical than the first time. I was an 18-year-old girl from a small New England farm, and I was so goddamn sick of my hometown. I’d been desperate to get to New York for years already by that point. I just had this feeling — it almost felt like lust — that everything was going to happen for me there. And I was right.

What place most surprised you in all your travels, going back to your early days as a SPIN staff writer?

What a great question! I was so blessed to be able to do such adventurous traveling with SPIN, but for some reason, the place that most surprised me was Erie, Pennsylvania, when I was writing about professional bowlers. I fell into a subculture there that I’d never experienced firsthand before — namely: a rust belt, industrial, blue collar, social community. That bowling alley was the center of the community, and I came to love and admire so many of the people I met there. It filled me with a sense of near-envy, not to have grown up in such a tight knit community — and also a sense of sorrow that this world was ending, as all the jobs were being sent overseas. I found it very touching.

What place most thrilled you?

The Nevada desert, when I got to write about Burning Man. This was more than twenty years ago, and Burning Man was not nearly as organized and, in a way, sanitized, as it has become. It was a truly wild scene — and it had an air of danger and anarchy about it. I just remember speeding through the desert at night with some cool LA kids I’d met that day, and we were in a driver-less car (we’d put a cinderblock on the accelerator, and tied the steering wheel to the door handle so we would just keep making big lazy loops) and all the stars were out, and we were literally hanging out in the trunk of the car, drinking and laughing…it was one of the most magical moments of my life. 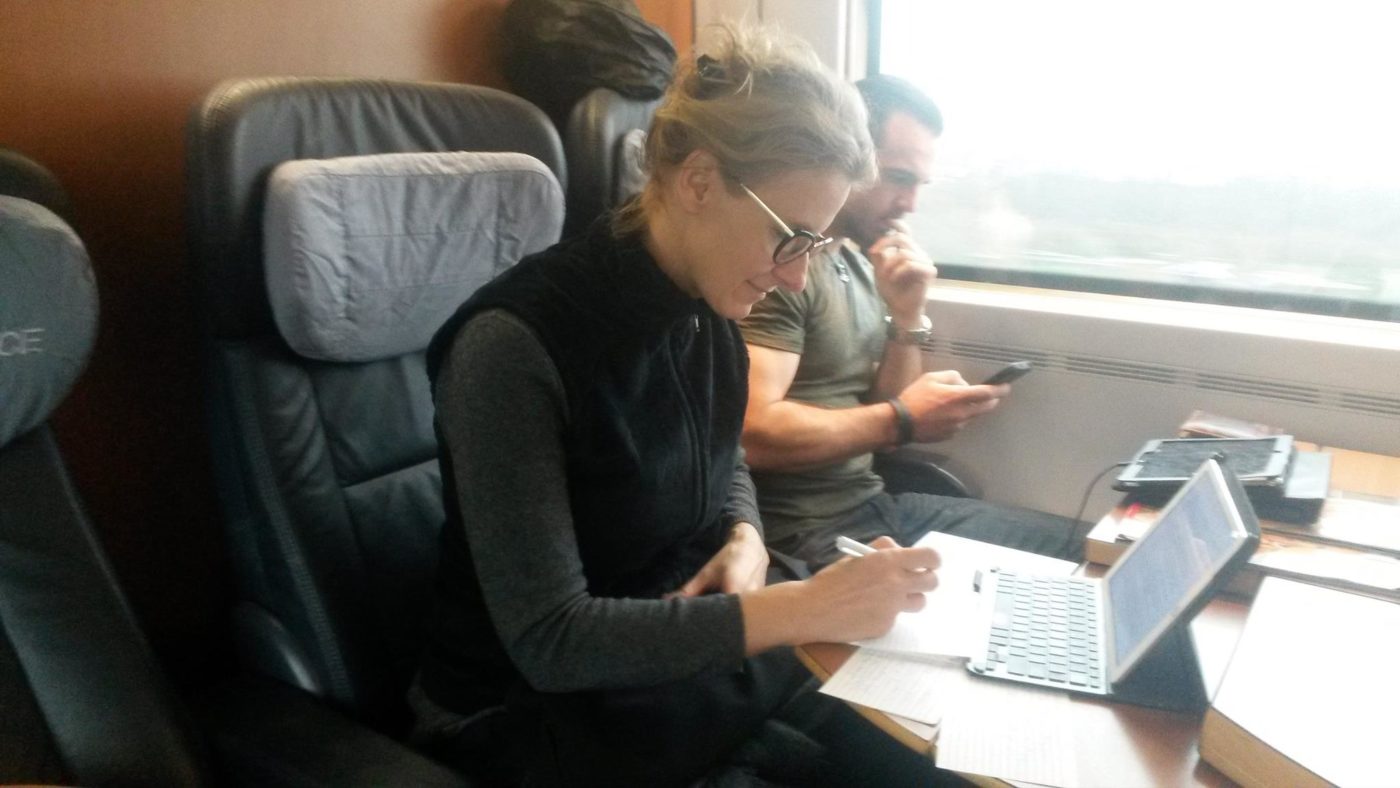 Writing on the train from Karlsruhe to Frankfurt, Germany

In Eat, Pray, Love you wrote: “I feel about travel the way a happy new mother feels about her impossible, colicky, restless newborn baby — I just don’t care what it puts me through … It can barf all over me if it wants to — I just don’t care.” Where horrified you the most in your travels?

Remote industrial urban China, when I went to write about the contribution of the Three Gorges Dam. It truly felt like hell to me. This brutalist landscape of grey concrete and equally grey skies. Crowds of workers with grim, similar expressions on their faces. No beauty, no nature, no light. Everyone had respiratory infections from all the air pollution, and everywhere they were building more, more, more factories. It was incredibly depressing.

What are three of the best meals you’ve ever had?

How about I tell the three courses of the single best meal I’ve ever had? In Taormina Sicily, I stopped a police officer on the street and asked him where I should eat. (Cops always know.) He directed me to a nameless little restaurant down a car-less alley, where I ate: 1) a salad of blood oranges, red onion, and ricotta as fluffy as cloud; 2) a dish of big, loose, homemade pasta envelopes in a briny seafood broth, and the pasta was stuffed with crumbles of sausage and herbs; 2) a stewed rabbit, with the meat falling off the bone. There might also have been two bottles of wine. I was alone, and I was in heaven. I still vividly remember every single bite of it, plus tiramisu for dessert.

What’s the most overrated destination you’ve been to and where have you felt most unwelcome in the world?

Shoot me, but I’ve never been able to get all that excited about Paris. I know, I know, that makes me sound like an asshole…but I just don’t get that city. I mean, it’s pretty, but… I’ll take Rome, London, or New York over Paris any day. As for places where I did not feel at ease, I felt unwelcome in Tunis. Especially at night. It was the first major city I’d ever visited where there were no women out at night. Literally — not a woman in sight. Just groups of men, all smoking, all brooding, all staring at me and appearing to wonder why I was walking around unaccompanied. That feel neither welcoming nor safe. 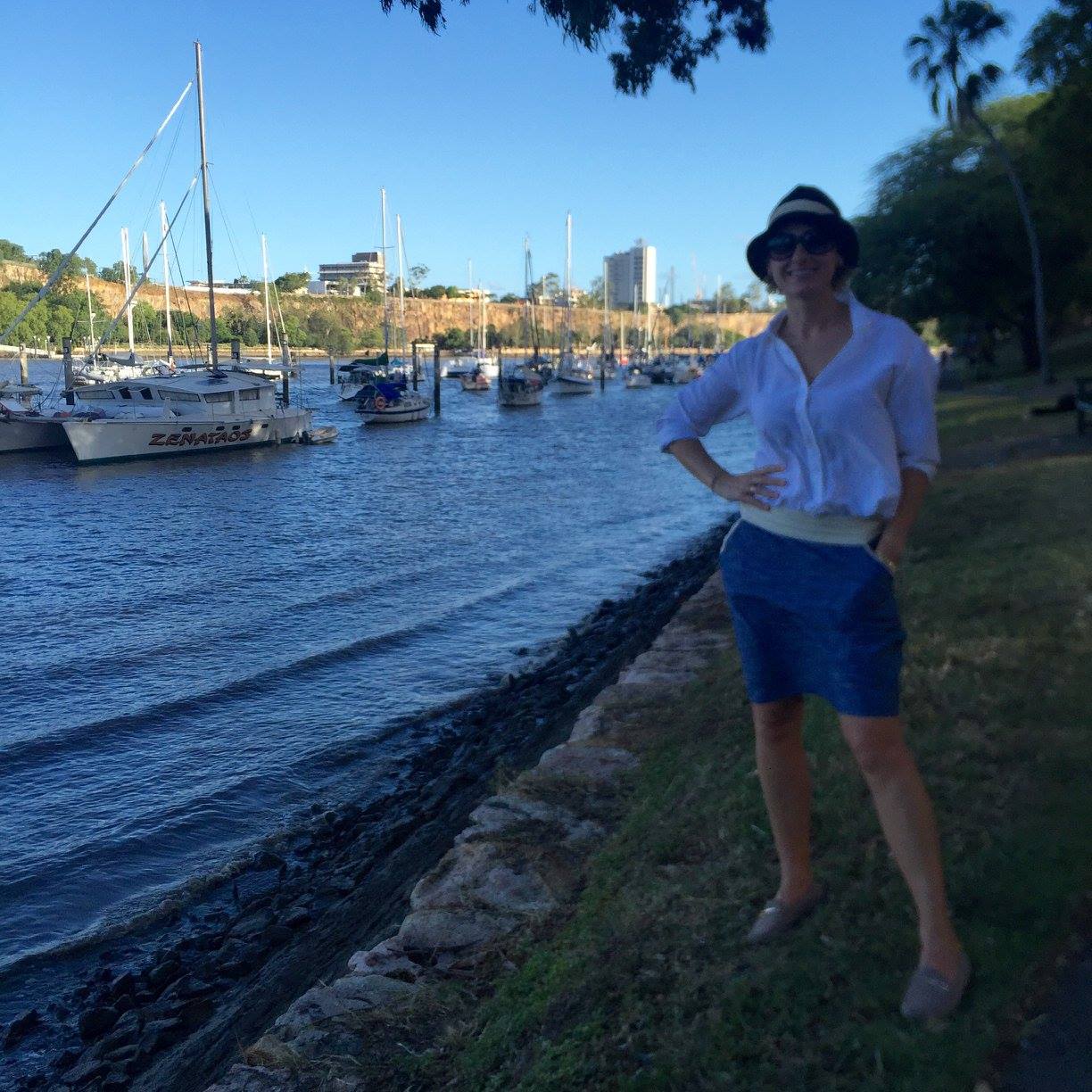 Who are the happiest people you’ve ever met/been among? Who got it most right?

You can’t beat the Balinese for getting life right. They get all of it right — beauty, spirituality, celebration, love, ritual. Something that I love about them is that they don’t envy or imitate Westerners; instead they treat us with a kind of graceful pity. They feel sorry for anyone who isn’t Balinese. So do I. They have the highest sense of self-worth of any people I’ve ever met. They know that their culture is something really special. They revel in it. It’s a joy to be around.

Who can teach Americans the most about welcoming and being kind and gracious to strangers?

Middle Easterners. I haven’t been all over the Middle East (yet!) but everywhere I’ve gone, I’ve been received like a holy visitor — and by the most humble people. I’ve had shopkeepers in Turkey close up their shops in the middle of the day to help me find my hotel, when I was lost. I’ve had taxi drivers in Lebanon drive an hour out of their way, just to show me something special, and to introduce me to their families. If you are guest, you are honestly treated like a gift from God.  And they take that hospitality with them when they emigrate out of the Middle East as well. The love of my life was Syrian, and my mouth still waters when I think of the feasts that her family prepared for me whenever I visited them in Detroit. They will give you whatever they have — more than they have. It’s beautiful to behold, and humbling. 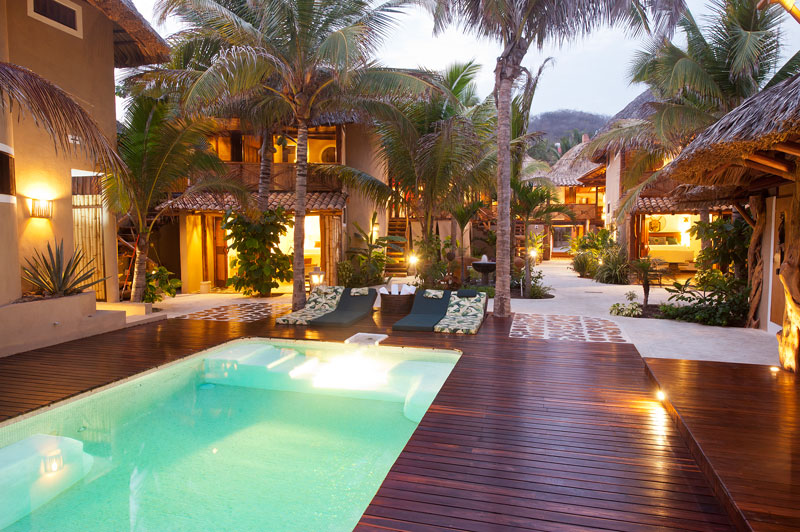 Pool view at Casa Aamori in Mexico, where she would like to disappear for a month

What hotel do you want to spend a free, obligation-less, non-working month in?

Please tell me that at the end of this interview, you’re going to tell me that I just won a free, obligation-less, non-working month in the hotel of my choice! But since you asked…Casa Aamori, on the Oaxacan coast, in Mexico. The dearest little quiet little boutique beach hotel. Please feel free send me over the details of when you’re arranging this for me…

What’s your favorite sentence you’ve ever written about Italy?