For the last three plus months, SOFI TUKKER, the very hot musical duo comprising Sophie Hawley-Weld and Tucker Halpern, have been on a mission to bring crib-pumping, high-energy DJ sets into your home, from their living room, under lockdown.  Digital signs of light and life, a new kind of rage at the pandemic and quarantine.

Since starting in 2015, SOFI TUKKER have rocketed to fame. Their song “Best Friend” peaked at number 3 in January 2018 on Billboard’s Top 100. Their debut single “Drinkee” (recorded during their final week at Brown University) was nominated for a Best Dance Recording Grammy in 2017. In 2019, their debut studio album “Treehouse” was nominated for a Best Dance/Electronic Album Grammy.

They’ve toured the globe and played to sold-out crowds at major festivals from Tokyo to Bogotá. Their records have reached Gold or Platinum status on every continent, minus Antarctica. If you really want to count Antarctica.

Sophie has a singer-songwriter’s sensibility and a deep love of bossa nova and Brazilian culture (she often sings in Portuguese – with a decidedly Carioca accent which she picked up while living in Rio de Janeiro). Tucker is an experienced DJ and a master of music production, dropping hip-thrusting, body-jiggling beats made with anything he can lay his hands on – cowbells, castanets, horns – you name it, he’s probably used it.

And they share a fondness for tropical jungle aesthetics — their live streams often take place amid lush foliage and areca palm trees that surpass Tucker’s 6’7” frame. 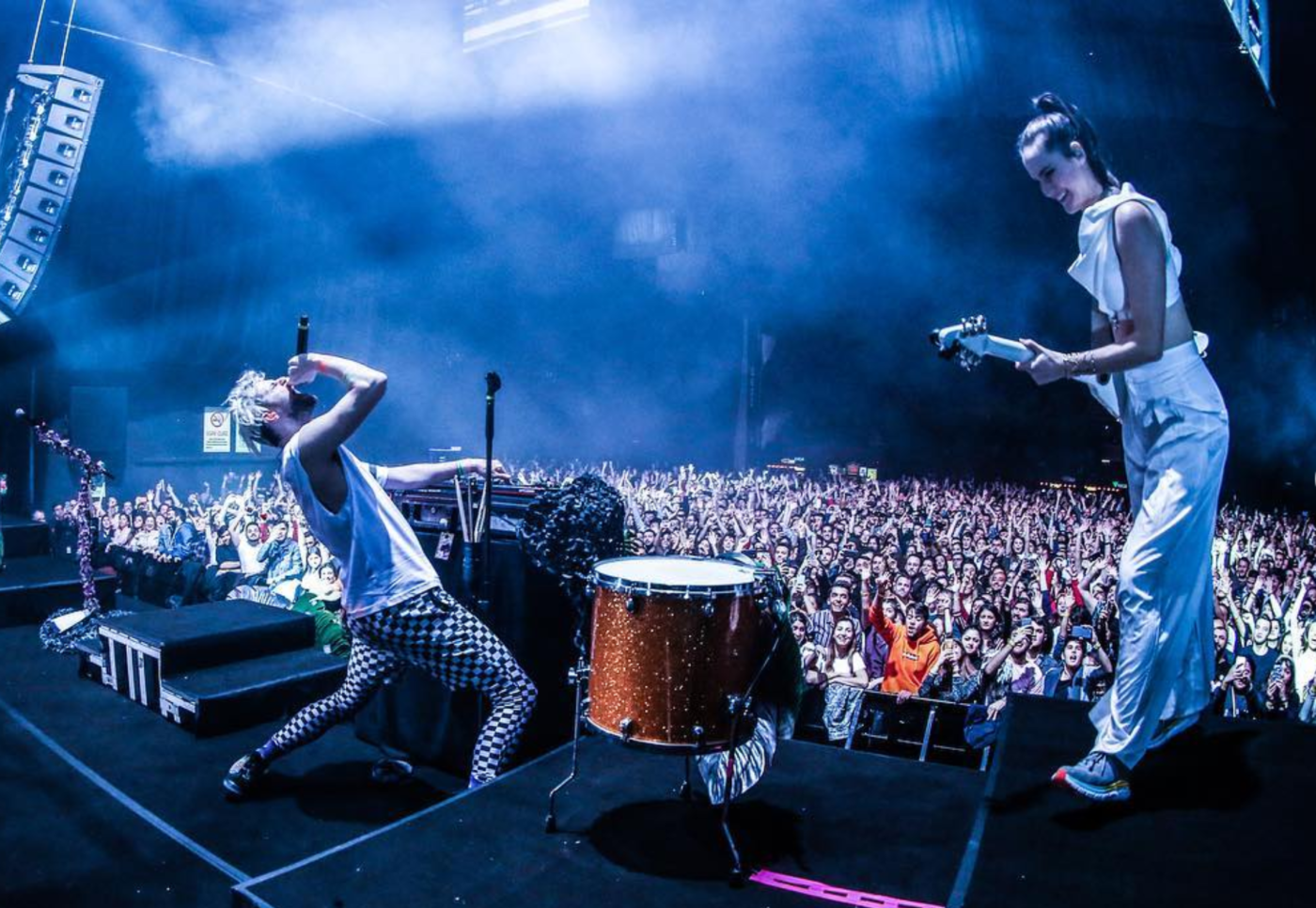 First place you want to visit when normalcy returns?

Tucker: I was going to say something dirty

You can say something dirty.

Tucker: I think my first place, right after the first place I was thinking, would be a dance club.

Sophie: Ooh… Laroc. It’s a club outside of São Paulo, and it’s spectacular.

What do you love most about Brazil?

Sophie: It’s cheesy and really easy to say about places but I really mean it when I say the spirit of the people, there’s just nowhere else like Brazil in terms of how people interact with each other and how people feel music.

Tucker: Yea, it’s inherent in their like blood. They’re just rhythmic, and appreciate music in a really cool way and can dance well, also are beautiful. A lot of beautiful peeps there.

Have you ever felt alienated or out of place somewhere?

Tucker: Yes. German airports! It’s because I’m always in bright colors and like funky outfits and German men just haaate it for some reason.

Sophie: They literally will turn their heads and point at him…

You know, this is a weird one, but the only thing I could really think of was once in a cab in Russia… I don’t want to make a generalization though, but some Russian men make me very uncomfortable. Like it’s a very masculine-dominated country and I feel my womanhood in a negative way there I don’t in other places in the world.

What places captured your imagination as kids?

Tucker: Florida. I was obsessed with Florida. It was the only sort of tropical climate place I’d ever been so I thought it was the greatest. And now we live here.

Sophie: Brazil definitely captured my imagination and that’s why I became so infatuated with it later. But a little later in life when I learnt about Bhutan, I became so obsessed, because it’s hard to visit and not everyone gets to, and they have the Happiness Index. I’ve just always been so curious about it. And I’ve never been there, so it still has my imagination. I would love to experience that one day. 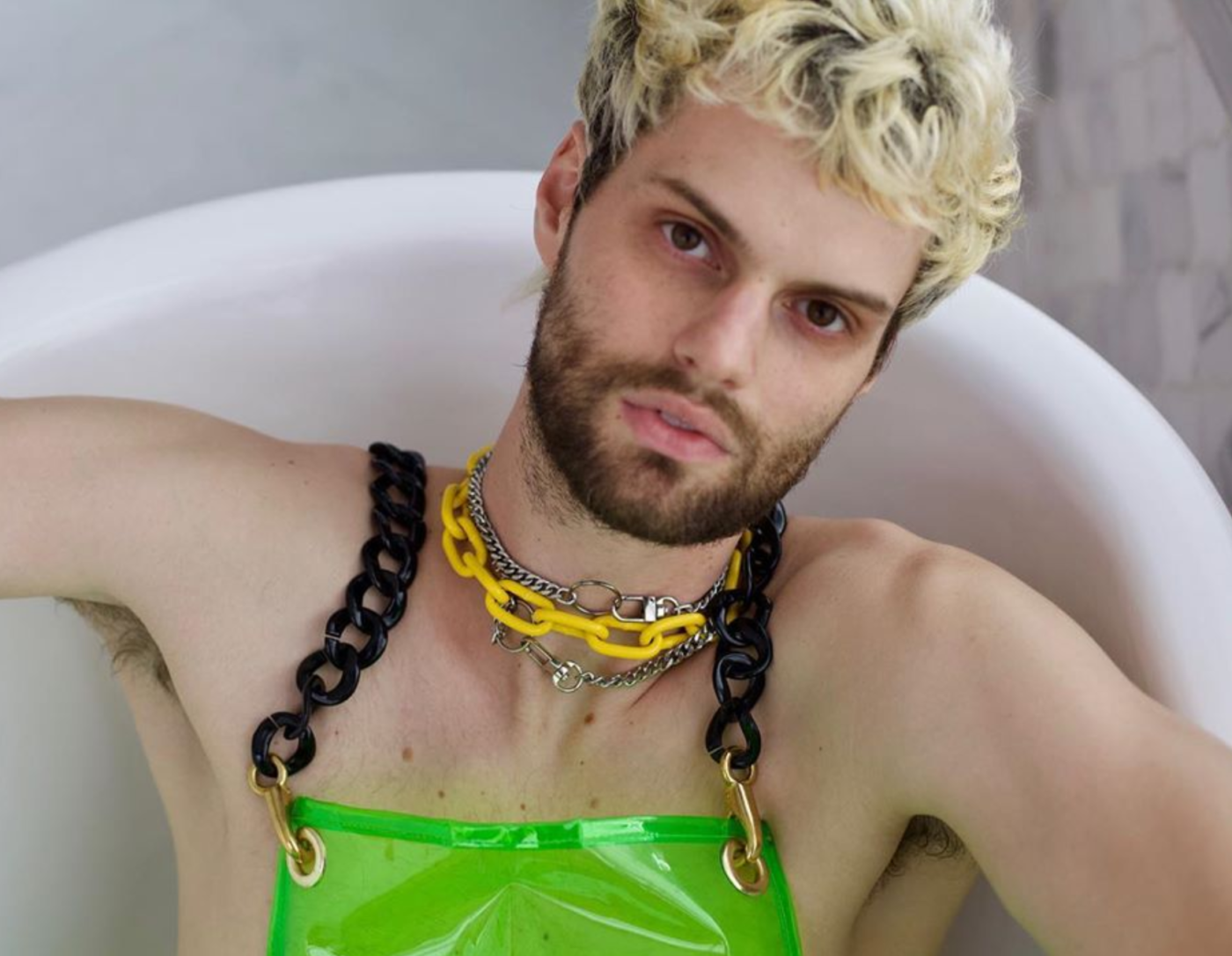 Sophie: One of my favorite comments that we’ve ever gotten was… Tucker often posts pictures that are um, how do you say it?

Sophie: Encouraging crude comments! And we got one that said, “I’m moister than an oyster”! And I just think that’s still the best comment that we’ve ever seen.

What’s your craziest mishap on stage?

Tucker: Sophie breaking her foot onstage in the middle of a show in Australia. That’s probably the worst thing that’s happened.

Sophie: That was definitely the worst. There was also the time when Tucker’s bass hit my eye and I started bleeding. I don’t know why I’m always the victim here.

Tucker: Well now we get to play on much bigger stages. That was like when we were playing on tiny stages.

How would you define your identities?

Sophie: It’s almost impossible to really describe it and we haven’t fully been able to… but I think our music is definitely global with a special nod to South America. I don’t really have that much of a national identity just because I never did. I have a passport from here. Some people call me German because I was born there, but that doesn’t feel right either.

Tucker: I mean, I definitely have always felt American and I think I slowly feel less and less American as this band has grown and as I’ve gotten to see the world and be embraced by other places. We really get to feel the love from people in those places. And, with the political climate and leadership in general, I’m not proud of being American a lot these days. But we’re connecting with people all over the world every single day, whether playing music to them or talking to them on the internet, and we’ve developed friendships all over the world.

What are some common misconceptions about you?

Tucker: That SOFI TUKKER is one girl named Sofi Tukker. Or that we are a couple, or that we are brother and sister… All those things are assumed, often.

What’s the most relaxing sound in the world to you?

Tucker: House music. Honestly. It’s probably when I think the least and feel the best. It’s not like a relatively relaxing thing necessarily, but it probably relaxes me the most.

Sophie: I’m gonna say something really cheesy but I really feel it: my mom’s laugh. She sometimes gets in this mood where she can’t stop giggling. And there’s really nothing like that ever, because she’s usually in control and she’s the boss of the family, so when she starts uncontrollably laughing, there’s nothing more at ease or relaxing than that sound to me.

What is home for you?

Sophie: I feel at home in a lot of places. With my parents in Geneva, but they’re going to move soon, so I’ll feel home wherever they go to. And I feel home in New York because we lived there for a while and my brother lives there. I feel home here in Florida for a number of reasons, but also because we have a physical home here. I think I’ve probably felt at home everywhere that I’ve ever lived. And I’ll always feel at home in London because that’s where my extended family lives.

Tucker: Yea. I feel very at home here. Interestingly we lived in Los Angeles last year and I don’t think I ever fully felt at home there. Am also close to my family, or my parents at least, which is really nice and that always is like the most at-home feeling.

What are some bands or artists you look up to?

Sophie: Randomly, I’d say Manu Chao, because of his relationship with global influences and I don’t know what his national identity is, but it’s probably as confused as ours is! Even though it’s a really different kind of genre.

Sophie: Every year we are in Europe over the summer, and so we take a couple days in the South of France because a friend of ours lives there and so it’s one of those traditions we’ve built, that we actually take a couple of days off and that’s very special. 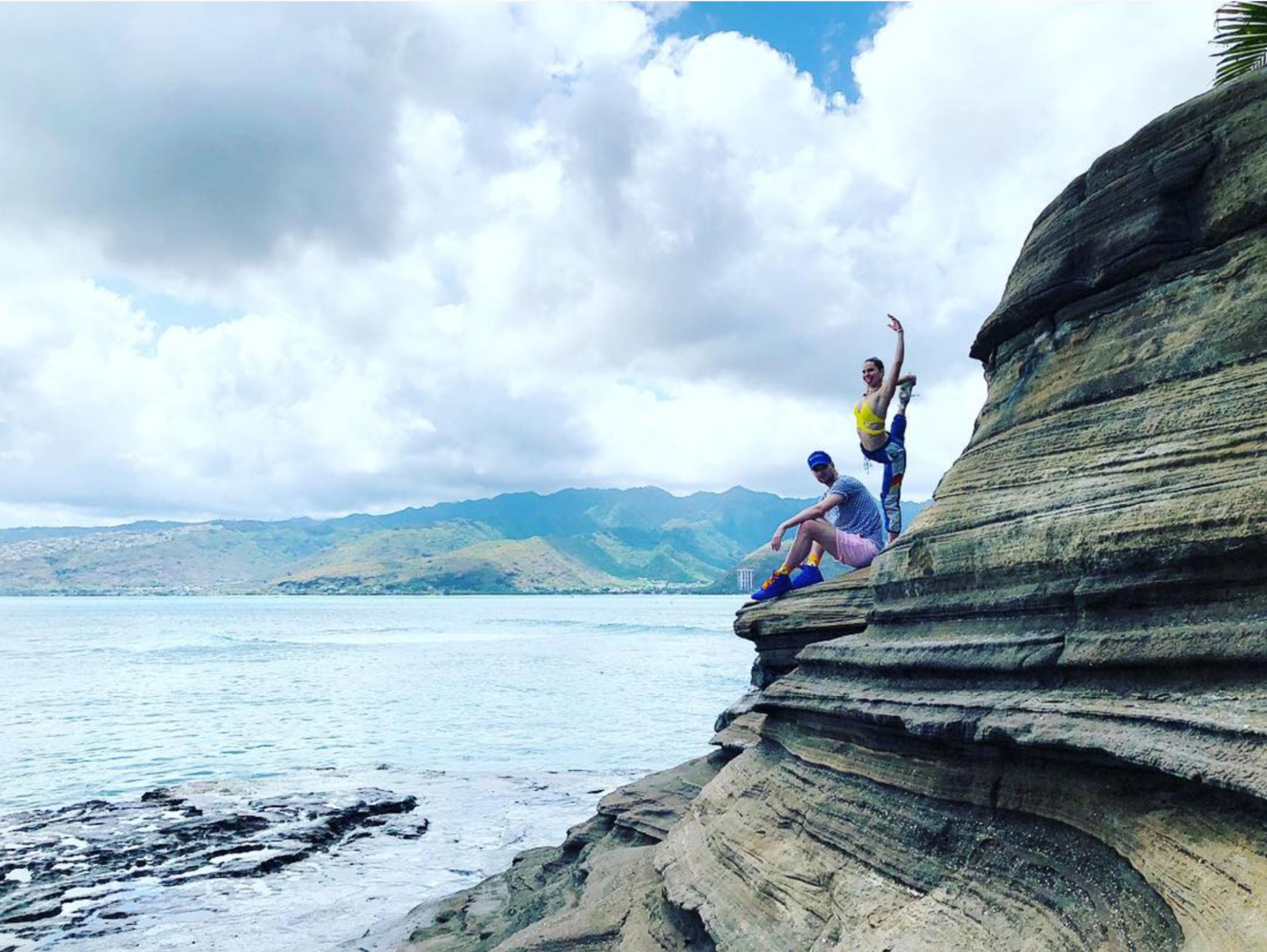 Sophie and Tucker on the Mediterranean coast***@sofitukker***

What are your upcoming plans for SOFI TUKKER?

Sophie: We’re making sooo much music that we don’t know what to do with it. We’ll definitely be releasing music, we just don’t know when a full body of work will be released.

Is there a question you wish you were asked?

Tucker: Yea. If someone was like, “Would you like me to set you up with someone?”, I would say “Yes!” 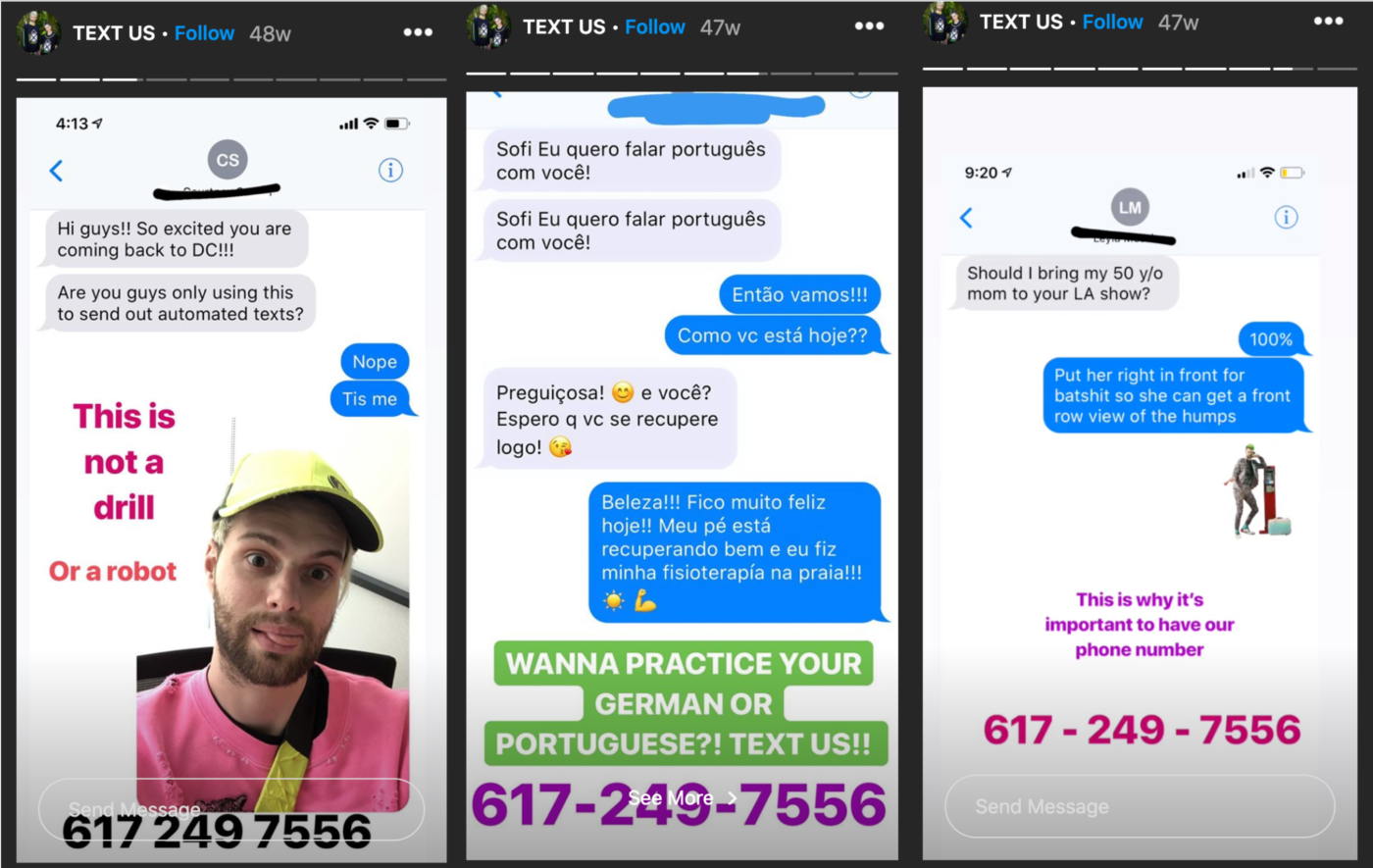