Island Outpost has been a secret hideaway for the rich and famous since 1994, starting with the exquisite Strawberry Hill property and expanding ever since. It’s recently been made more accessible to the less rich and lesser famous since 2016, courtesy of Chris Blackwell, the humongous and charismatic record producer who founded Island Records, and discovered and brought to worldwide audiences Bob Marley, Toots and the Maytals, Cat Stevens and Grace Jones, with whom he has remained close friends. Except Marley of course, who died in 1981, but you can stay at Strawberry Hill, where he recovered after he was shot during a failed assassination attempt in 1976.

After selling Island Records for a reported $300 million in 1989, as it had become “too big”, Blackwell kept flirting with the film industry, producing The Basketball Diaries, having already had a hit with Kiss of The Spider Woman. Today, English-born Blackwell just focuses on his adopted home of Jamaica, where he’s a defacto ambassador through his resorts and giving back to the community through his Oracabessa Foundation, supporting local education, sports, coral restoration and more.

Blackwell began his hotelier career in 1991 revamping Miami Beach with a few boutique hotels including The Tides and The Marlin. By 2005 he’d moved resort operations back to Jamaica where he grew up in between being at public school in England. Blackwell, who turns 81 in June, has a legendary hip edginess, as befits a man who started his empire hawking vinyl records from the back of his Mini Cooper, to Jamaicans in London.

Island Outpost’s outposts are scattered around Jamaica. They are Blackwell’s way of “reawakening the sophisticated and responsible traveler to the beauty and vibe of Jamaica today”, in his words.

He has four exclusive properties, having just opened the doors to his 1,000-acre jungle farmhouse Pantrepant, 20 miles from Montego Bay, where organic ingredients are grown for all of his resorts, and some others. But there’s a catch. You can’t stay at Pantrepant unless you’re already staying at one of the other places: Strawberry Hill Hotel, in the Blue Mountains above Kingston, which debuted in 1992; The Caves in Negril, opened in 1997; and GoldenEye, on Jamaica’s north coast, home of the famed Ian Fleming Villa.

In addition to being a hotel magnate nowadays, Blackwell, in 2008, launched his own rum, Blackwell Black Gold. Which makes sense since he does come from a 17th-century family-run rum company. (Try saying that when you’ve tossed back a few Blackwell Paradises.) 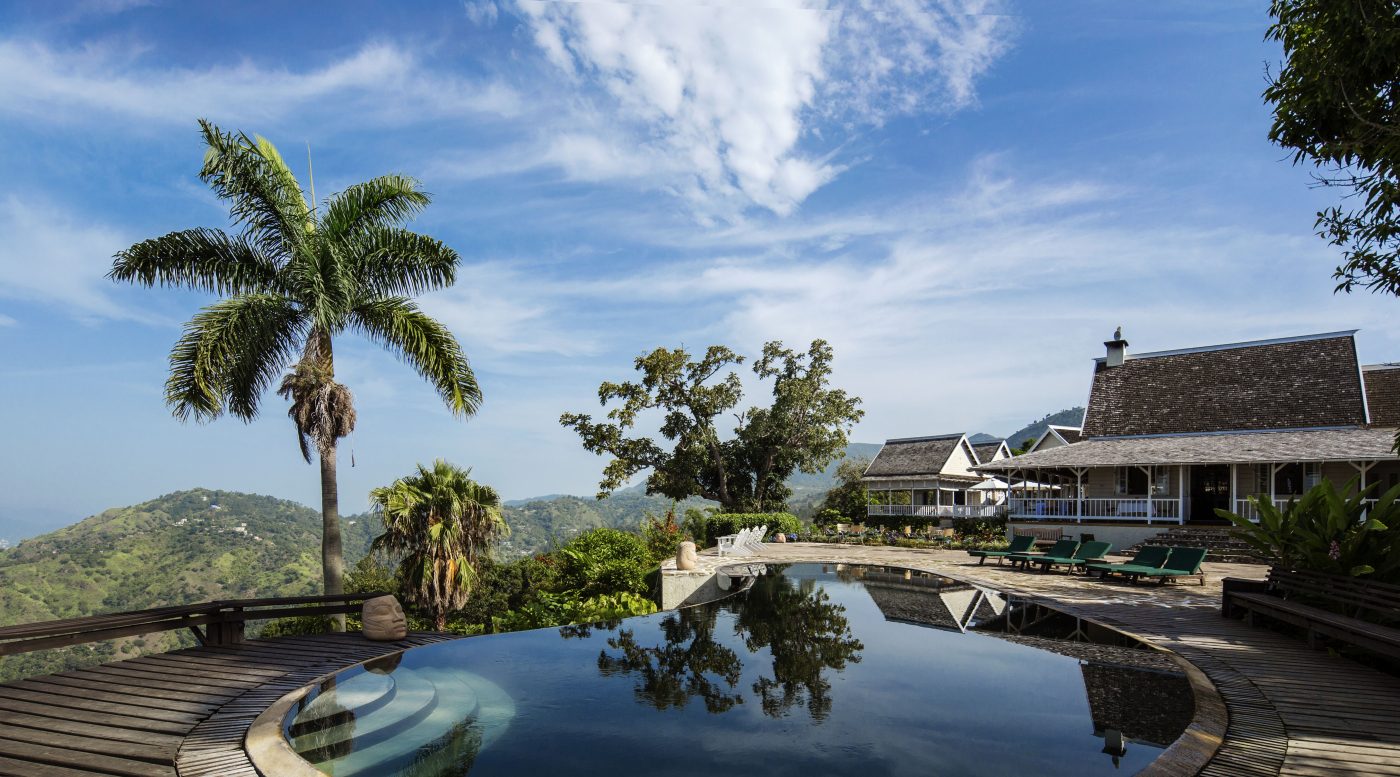 Although the 45-minute drive from Kingston’s Norman Manley International Airport is a fun way to get there, and can be arranged at $90 each way, you can also fly in via helicopter, which is much more fun, and can be arranged with the hotel, if you don’t have one of your own. 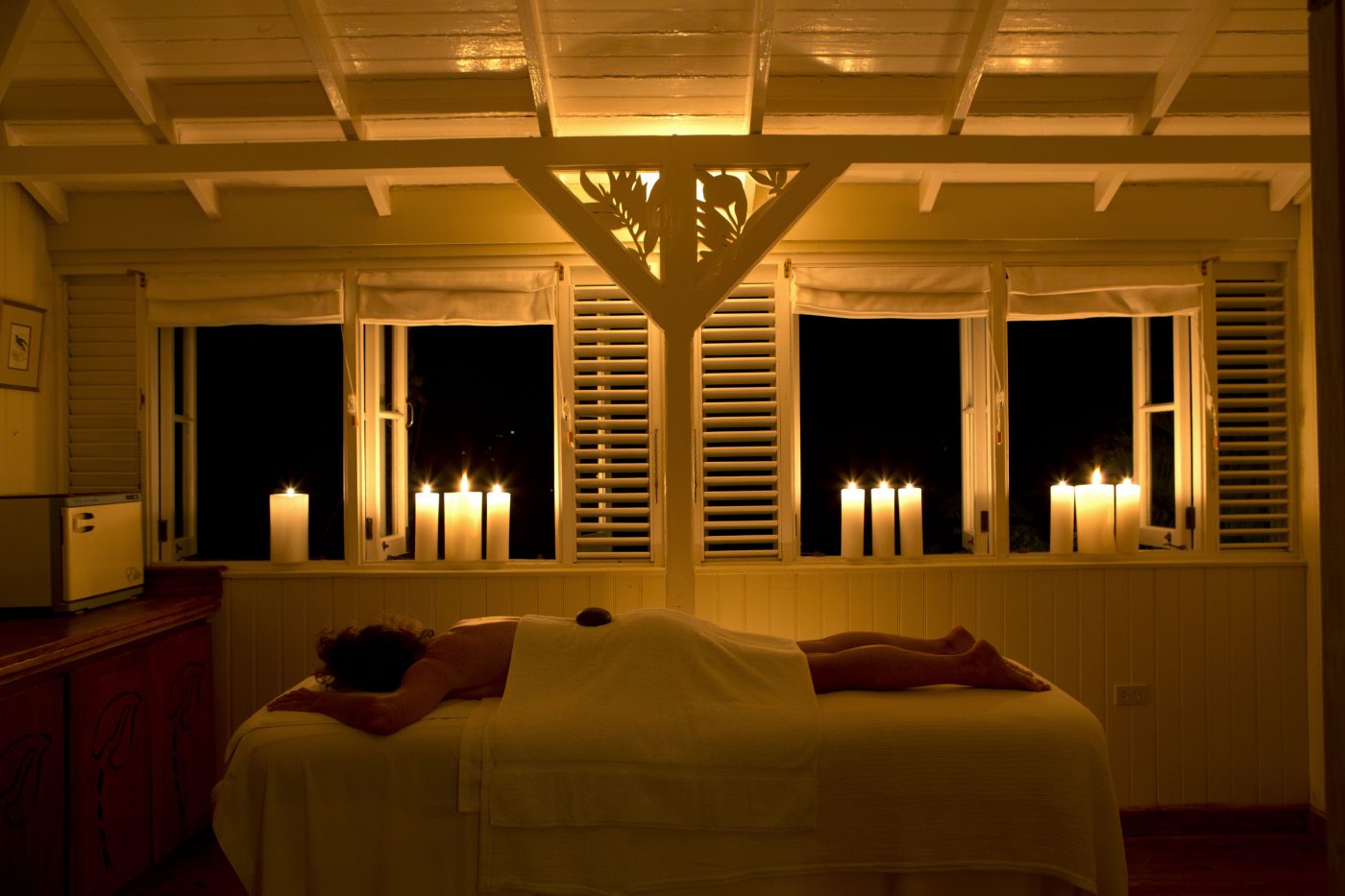 The spa at Strawberry Hill. It’s strange how laying under a small warm rock is such bliss, but it just is

You can see Jamaica’s capital, Kingston in the distance from the infinity pool.

In the bar there are photographs of luminaries from Bono and Mick Jagger to Bob Marley, Sting and the Princess of Wales. Hey, mon, this place has stories!

The Strawberry Hill restaurant is open for breakfast, lunch and fine-dining dinner. It’s highly popular with people coming from Kingston, and on Sundays is known for its brunch.

Besides being pampered in The Spa with a Blue Mountain coffee scrub, there are miles of tropical trails to explore on a mountain bike if you just can’t relax, plus exclusive tours if you’d like to explore. 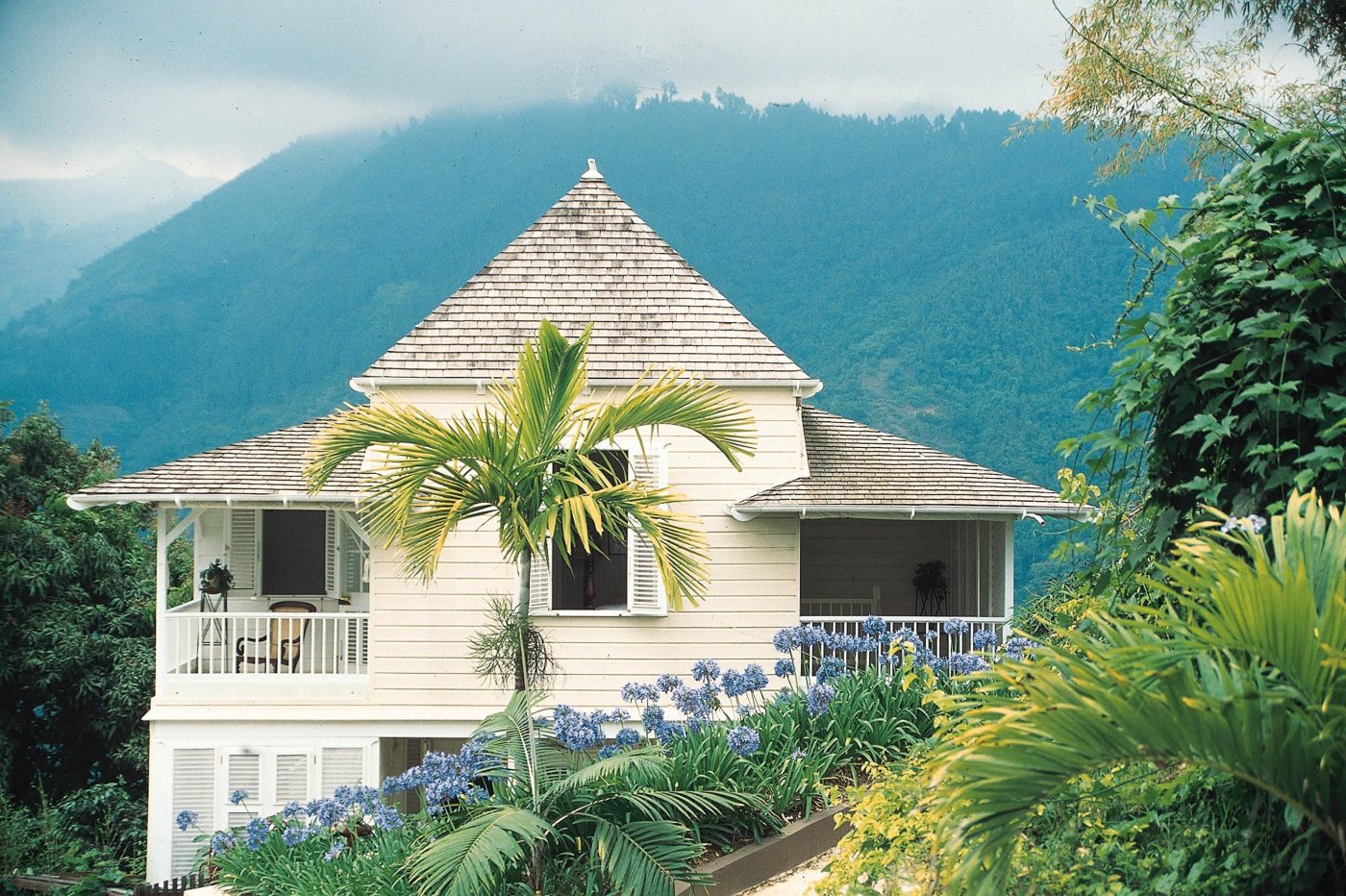 Villas from around $600/night – season dependent 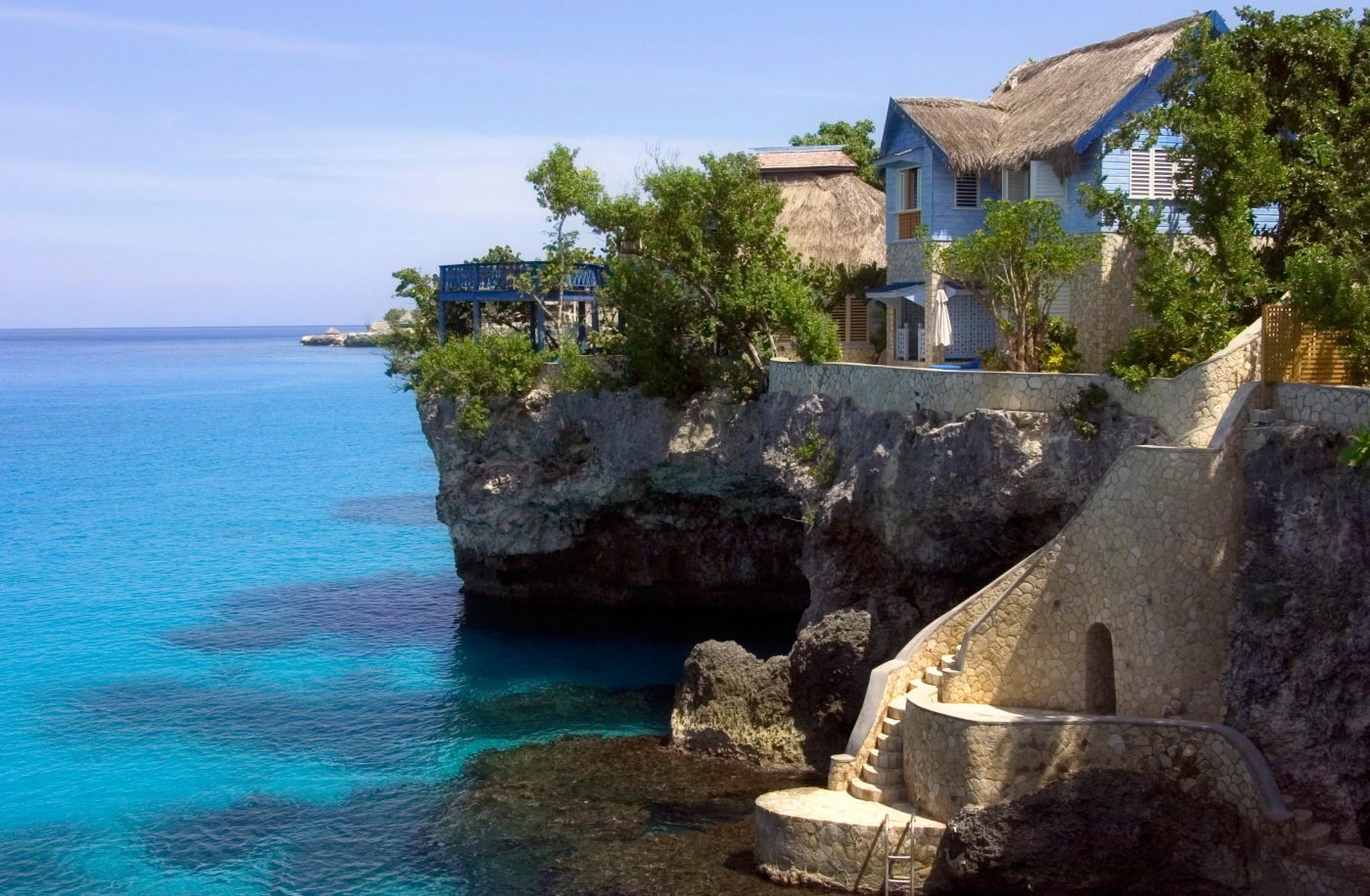 The Caves Hotel sits on a cliff on Jamaica’s far west coast in Negril. You can sip cocktails in Blackwell’s Rum Bar, situated in one of the grottos looking out over the Caribbean Sea. That is oh so romantic at twilight, and oh so amazing at any time regardless of the light. You’ll feel a part of a secret club. And you are. This is a secret favorite honeymoon spot, and you have to be over 16 years old. (Although, if you’re 16 and on your honeymoon, you’ll probably want it kept a secret.) You can dine in a candle-lit cave and stay in thatch-roofed cottages with steps down to the water.

The Caves Spa offers a variety of scrubs with Jamaican brown sugar and massages to help forget where you are. (Jamaica.) 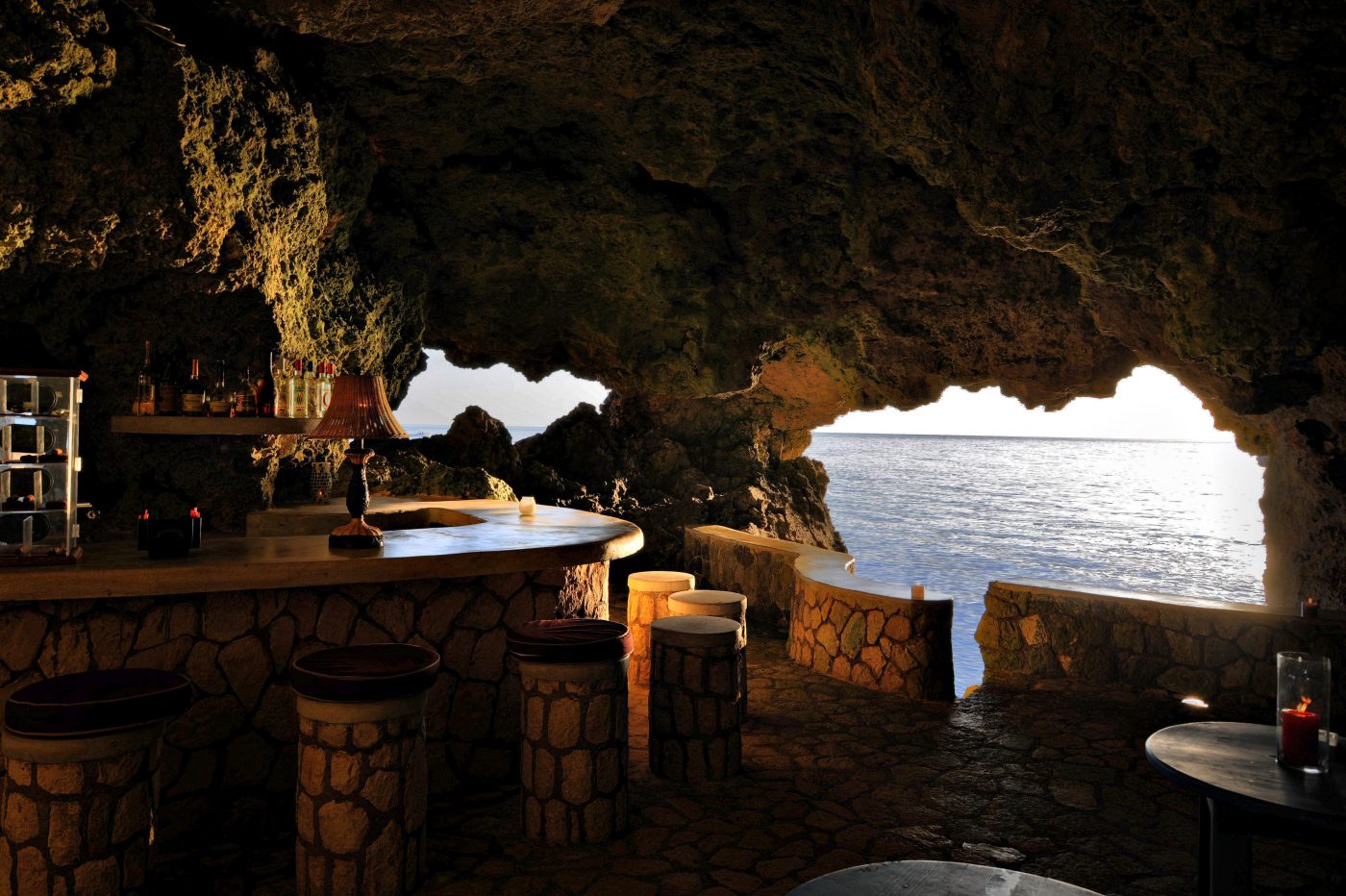 Blackwell’s Rum Bar in the grotto. This place (and a few cocktails) can also make you forget where you are

Sitting above some of the most spectacular sea caves in the world, there’s incredible snorkeling and you’re minutes away from a four-mile-long white sand beach that’s called Seven Mile beach — but it’s not, it’s four. Don’t worry about it.

For dining, The Gazebo is alfresco under a palm-fringed roof and great for banana pancakes for breakfast. The Dining Room offers a 24-hour bar for drinks and tasty things. Oceanside under the palm trees is The Sands, which is fine dining at nighttime, and more casual by day. You can also dine in a cave, if you’re into that sort of thing.

If you need to leave, there’s a vibrant scene close by in Negril with clubs and live entertainment. Just ask and they’ll point you in the right direction. 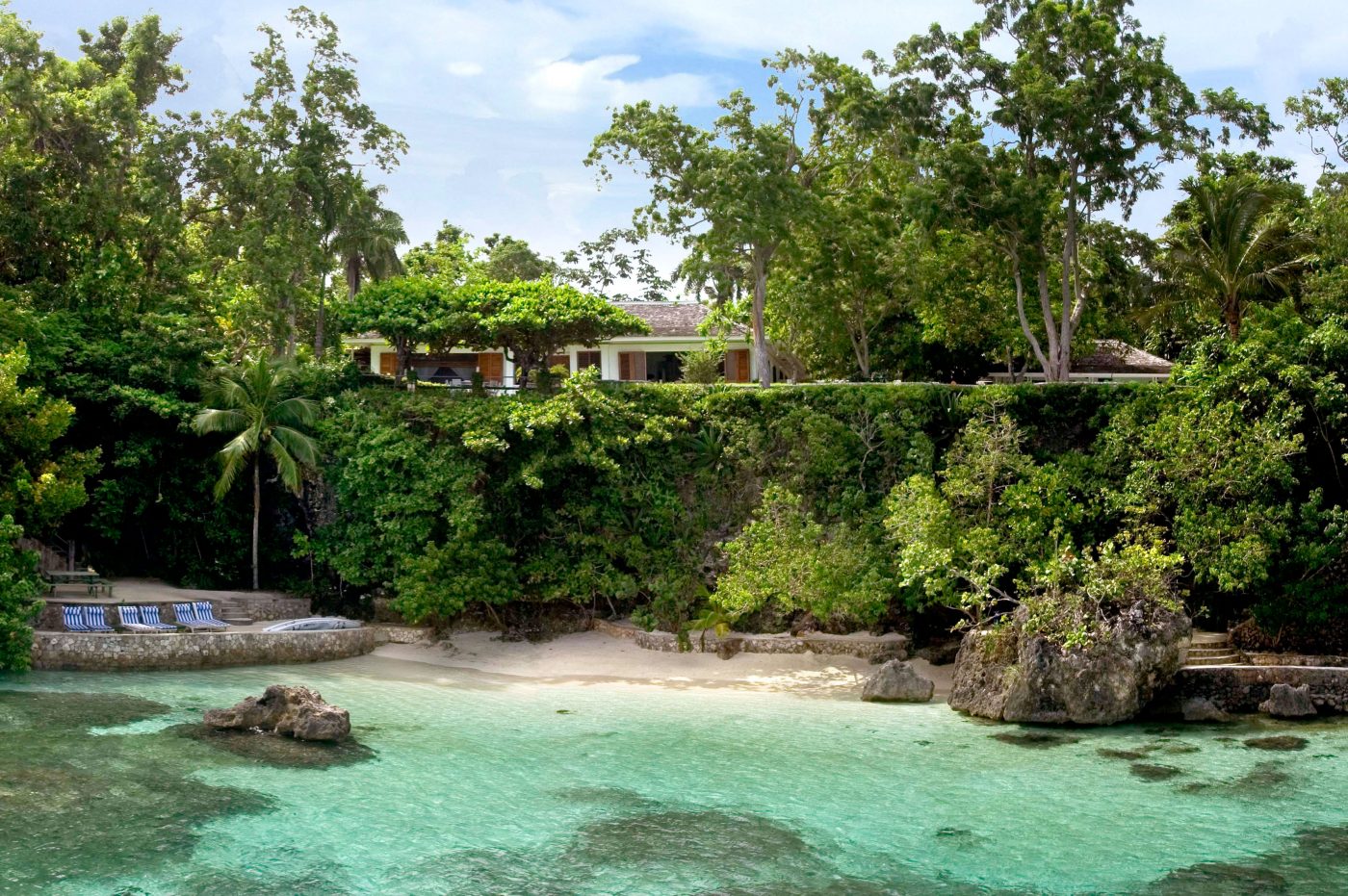 The Fleming Villa and private cove bought from Bob Marley in ‘77, who’d owned it for a year

In the 1950s, Ian Fleming created the 52-acre estate which he named Goldeneye, after a wartime operation he’d been working on (although he also claimed a Carson McCullers short story title as an inspiration, and Goldeneye is a species of duck). He later came up with James Bond at Goldeneye, christening his protagonist after the author of a book about bird watching in the West Indies. He wrote 12 Bond novels and two collections of Bond short stories. Right here. The famed scene from Dr. No when Ursula Andress with her knife strapped to her thigh approaching Sean Connery from the turquoise waters — that was filmed here, too! Bonus trivia alert: You can catch the uncredited Blackwell playing ‘Henchman jumping from the dock’ in the movie, but you’re still probably transfixed on Ursula’s knife.

Blackwell bought this place in 1977 for himself, then turned it into a hotel, opening it to the public in 2010. Ian Fleming passed in 1964, but his desk still remains where he left it — just in case you ever need some international spy inspiration. You can book his five-bedroom villa for a mere $6,000 per night at low season. 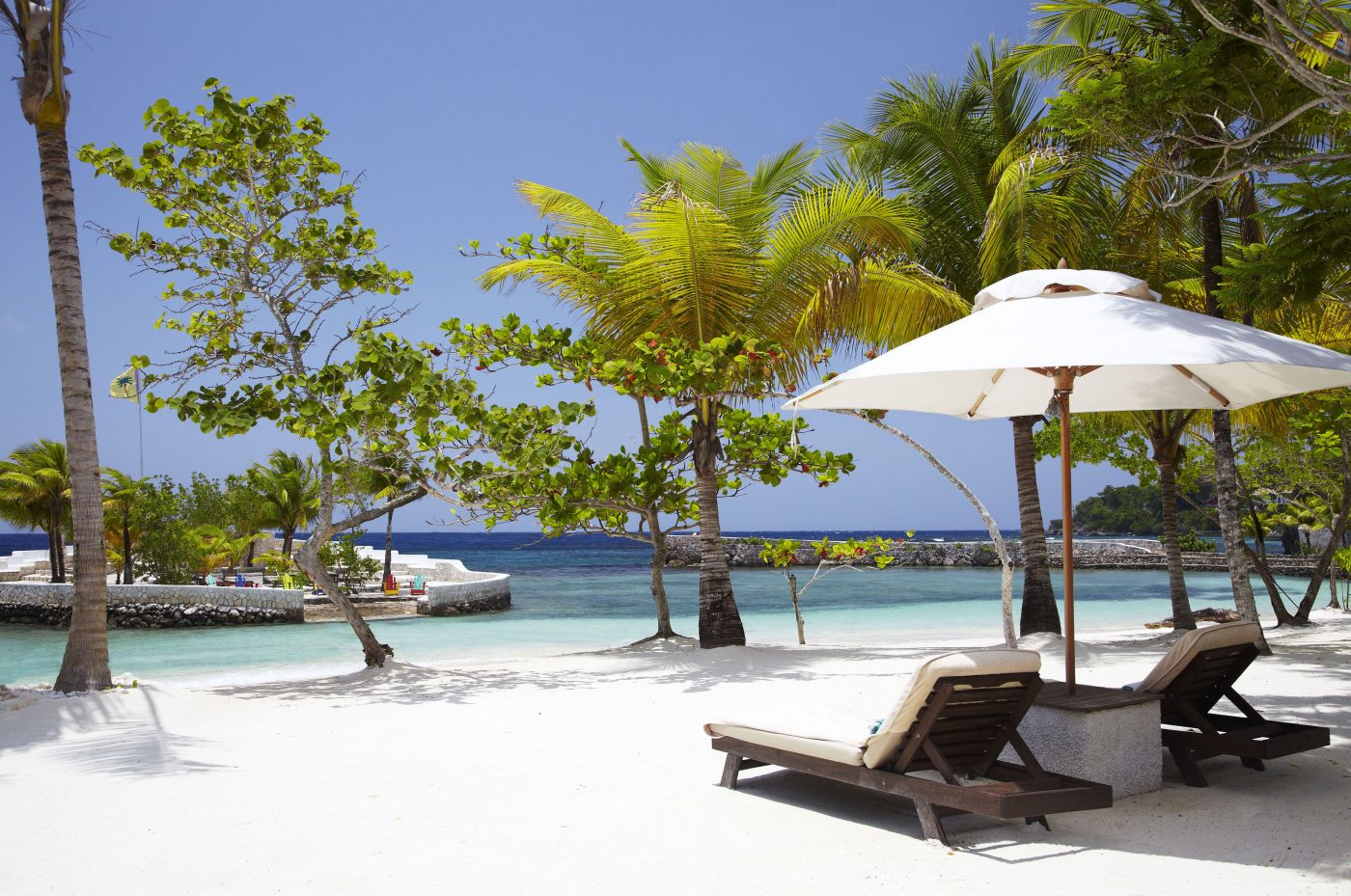 GoldenEye was built on a four-acre lagoon that later joined with the Caribbean Sea. The lagoon is still a warm natural bathtub, a mix of saltwater and spring fed — a float in lush coconut breezes, a massage of every sense you ever had. You will cry at some point.

When more and more famous friends kept arriving, Blackwell had to expand. With help from designer and local architect guru Ann Hodges, cottages kept popping up, and there are now 26 extra beach huts built in varying heights, all with Jamaican furniture, local botanical bath and beauty products, hardwood floors, high ceilings, airy open breezes and fridges with coconut water. And you get a specially curated playlist of Island Record music. There are many nice touches. 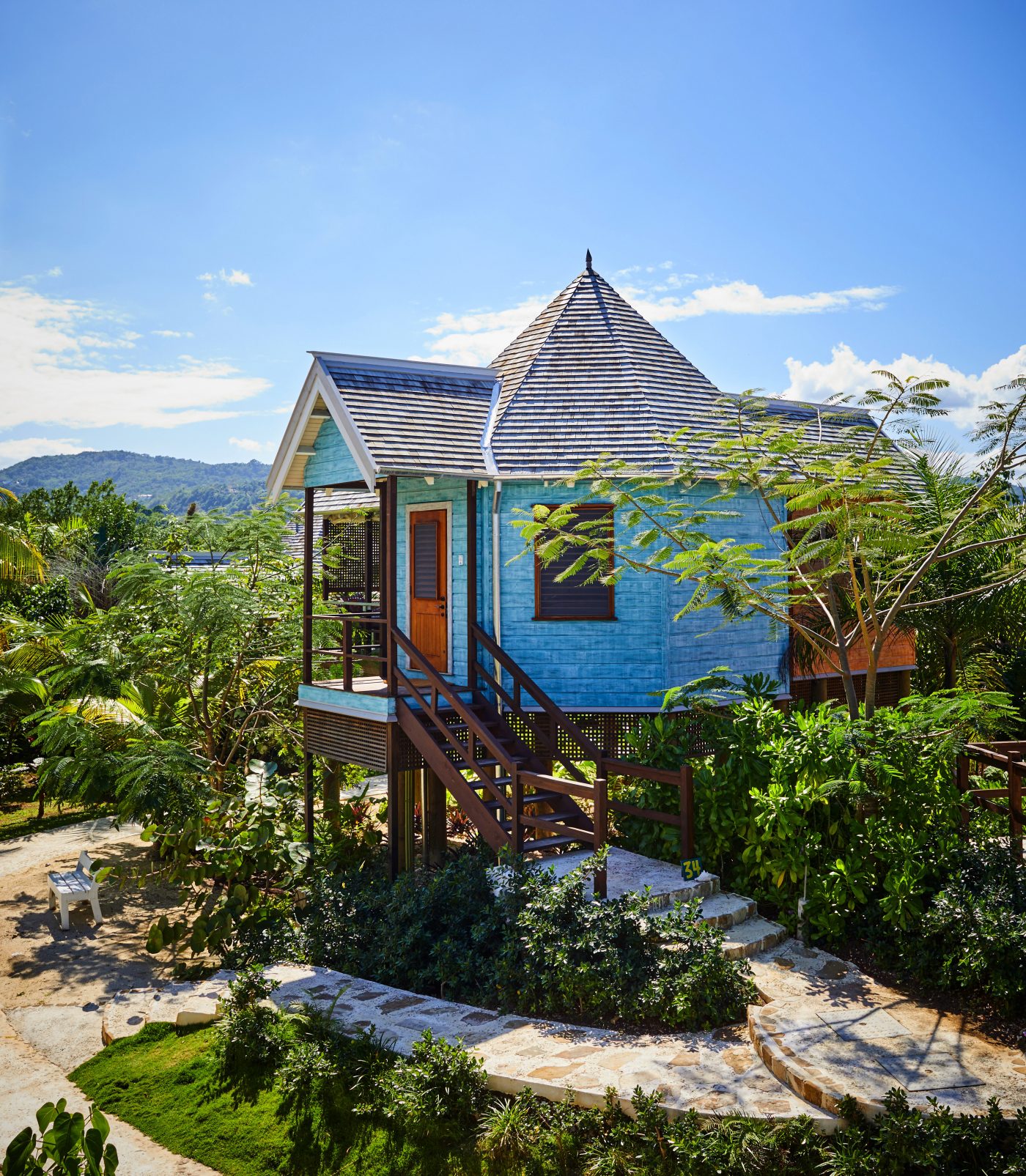 Now totaling 45 villas, cottages and the newer huts, you can choose from beach villas on Low Cay Beach (that open directly onto white sand) featuring a living area/kitchen, mod cons and outdoor shower; lagoon villas; lagoon cottages (that look as if they’re floating, with private gardens and outdoor showers and tubs); or the beach huts.

There’s a tennis court too, FYI.

Excuse me whilst I kayak across the lagoon to the Field Spa for my Lemongrass and Wild Lime Abyhanga (it’s an Ayurvedic-style massage) and please don’t expect me to come home again.

At The Bizot Bar, on Low Cay Beach, it’s beach casual with collages of covers from Island Records and portraits adorn the walls — a memoriam in time. There are light bites, international wines and exotic cocktails with Chris’ rum. The bar is named after Jean-Francois Bizot, a close friend and founder of French magazine Actuel and radio station Radio Nova in Paris, whose cool sounds stream out in the bar.

Watch the sunset from The Gazebo restaurant between the lagoon and the Caribbean Sea serving local fare with an international twist: Saffron Poached Snapper with Scotch Bonnet Hollandaise, grilled lobster tail and an amazing coconut shrimp curry for instance. But the menu changes depending on what’s fresh. 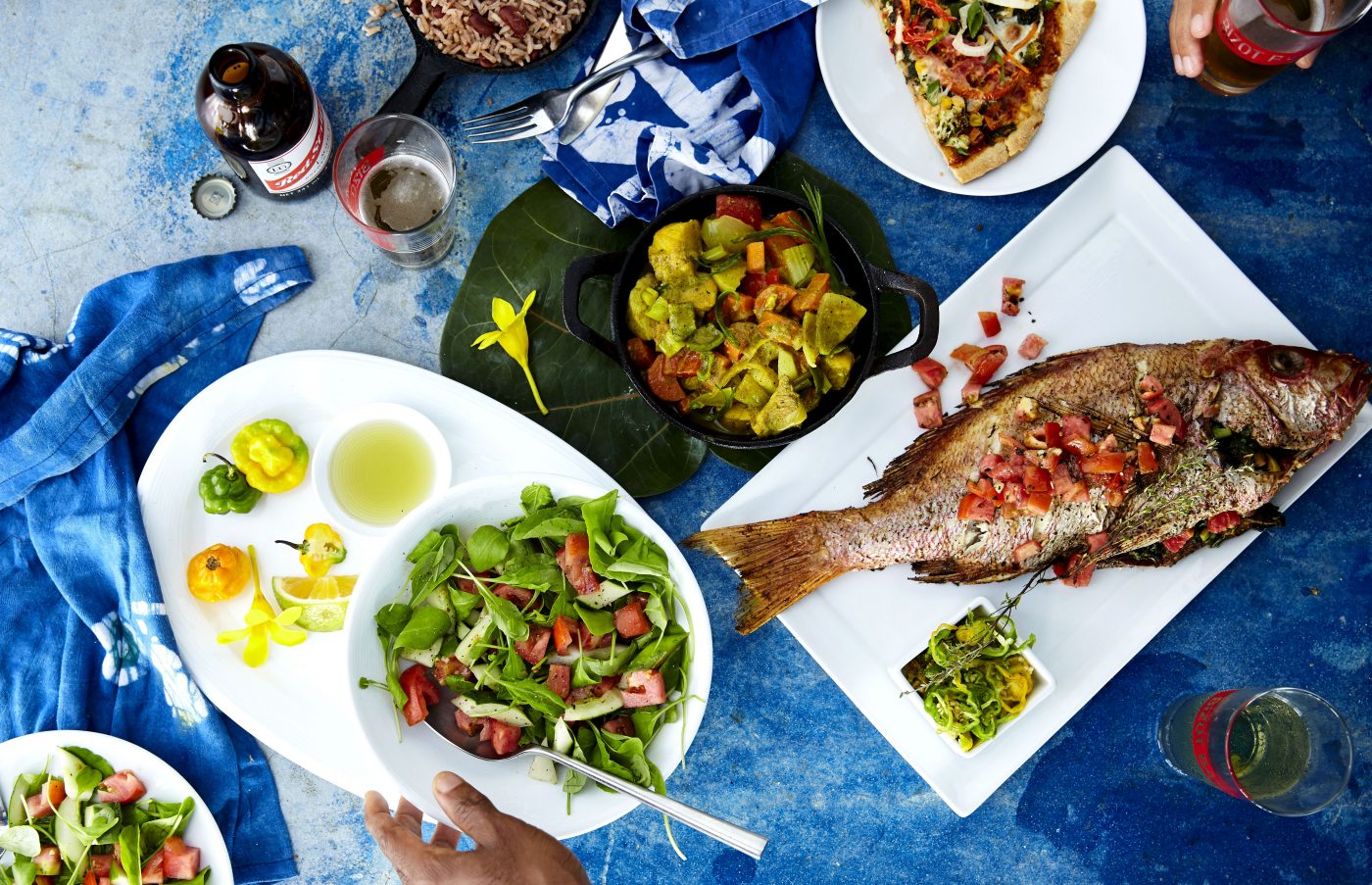 Fresh fare at The Gazebo at GoldenEye

Additionally Shabeen is a seafront bar and rooftop lounge for cocktails and drinks to watch the sunsets. You will not want to leave. And Bamboo Bar is a laid back rum bar with the great Jamaican jerk chicken and fresh fish from the sea. Maybe you won’t be able to leave there either. But there are worse places to wake up in. (We mean in your hotel room, rather than the bar, but, then again, seriously, how bad would it be to wake up in the bar too?)

GoldenEye has a special offer until October 31st, 2018: four nights for the price of three, or seven for five. And you get a flask of Blackwell Rum, free WiFi, some meals and other goodies. Plus you can get a great GoldenEye pen when you leave with a little Jamaican fishing boat that moves up and down in the end (they’re in the room!). Laugh at the pen offer if you want, but…well, if you go, you’re going to covet that pen.

The Fleming Villa from $6,000/night low season, but you get a butler, housekeeper and a cook. And five bedrooms. So, you know, not bad.

The latest addition to the portfolio of magical properties, is the 1,000-acre Pantrepant Farm. If you’re more into the active thing, try here. It’s an hour from Montego Bay, a working cattle farm and Chris’ secluded hillside retreat, with magnificent Indian Brahman and dairy cows, chickens and geese. Plants, food, herbs and botanicals from this farm go to all the resorts along with produce from local vendors. 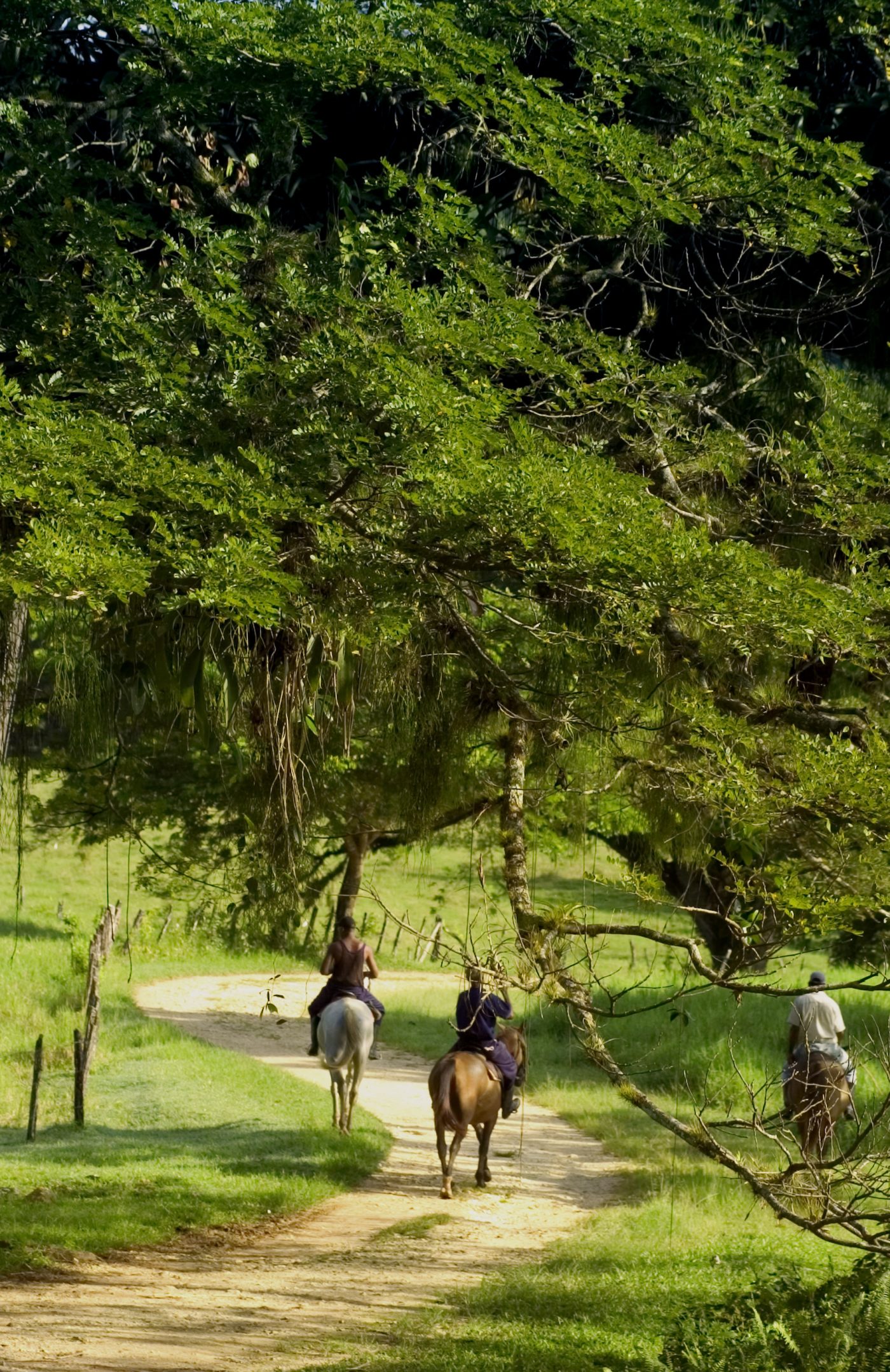 They produce honey, make their own butter and ice cream, have an organic vegetable garden, fruit trees and of course a coconut grove. It’s only recently opened up to guests and offers only one two-bedroomed cottage to guests of GoldenEye, Strawberry Hill or The Caves. Yes, that’s the pre-requisite, and it’s not a trick. You’re special!

There are spa services booked a day ahead, horse-riding through the jungle and a swimming hole with tubing and kayaking. Children are welcome and catered for and can help do farm things, like milk cows, or you can send them through the jungle on a horse. They’ll probably come back…

For all Island Outpost Resorts peak season is through mid-April, but there are great offers to be had during their summer months, too.

Should you get the urge, flights to Jamaica from major U.S. hubs leave multiple times most days. American, Delta, JetBlue and Air Canada fly from JFK in under four hours.