I’ve participated in everything from séances, yoga retreats, vegan festivals, full moon Goddess rituals, and New Age expos, but in my opinion, the most magical happening in Los Angeles takes place at Red Eagle Ranch.

Every Tuesday evening (and every other Sunday) at his home perched high in the canyons of Malibu, an enlightened spiritual master, Riz Mirza, channels the spirit of an American Indian called Chief Red Eagle, at an event he calls, The Circle of Light. Spiritual seekers and those who are just curious from all over LA flock there to receive messages from the wise and benevolent entity.

My friend Ana, a fellow spiritual seeker and healer, told me about Riz over lunch one day. “Do you want to go?” she asked.

“You mean to tell me that I can ask a spirit whatever I want for only forty bucks? Hell, yeah! I’ll even drive,” I replied

So, on an unusually warm Tuesday, Ana and I arrived at the ranch at 7:15 P.M. Strands of multi colored twinkle lights illuminated the way up the long driveway to the front door of the hundred-year-old, two-story cottage. A hawk soared overhead and landed in a nearby tree. On the porch, sage was burning in a large abalone shell.

I was immediately intrigued as Riz welcomed us at the door with a warm smile and a hug. With exotic good looks, and standing at 6’2” he invoked the feeling of a powerful Viking. We left our shoes near the door, paid his assistant $40 each, helped ourselves to some herbal tea and entered an enchanting and whimsical living room. 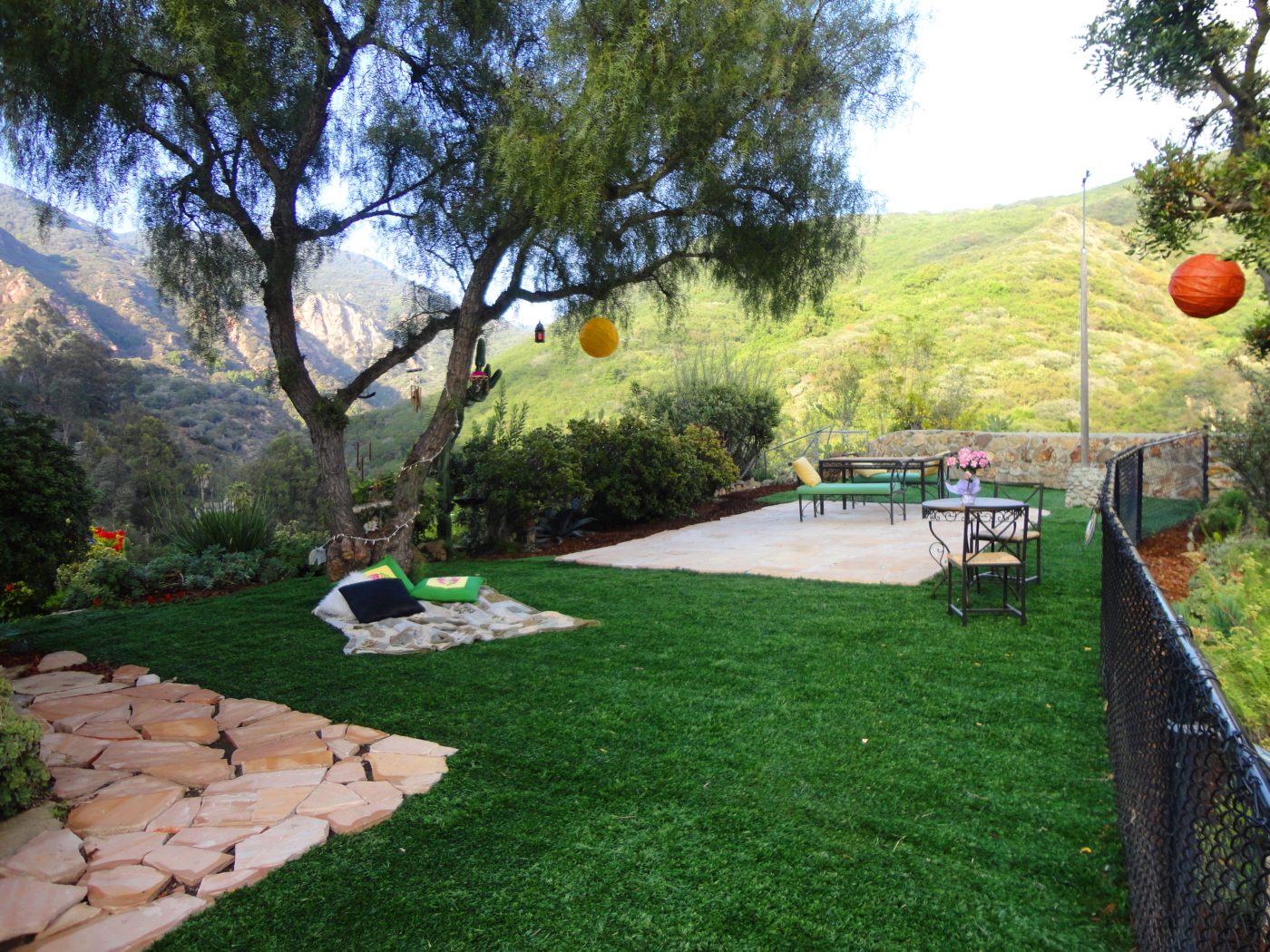 The backyard at Red Eagle Ranch is a peaceful sanctuary

Hanging purple flowers and twinkle lights adorned an artificial tree in the corner; LED candles glowed in the fireplace, on the mantel and on the large wooden coffee table. Crystals, Christmas lights, deer antlers, salt lamps, a glass case full of Harry Potter memorabilia, and an antique piano added to the eclectic décor.

We took a seat on the large sectional sofa and waited for the others to arrive. When the session began, around 40 people were seated — on the floor, the winding staircase and upper balcony.

Riz sat in front of the fireplace in an oversized wooden chair. After a warm welcome, he invited us to set our phones on the coffee table to record the session, then gave an explanation about channeling, led us through a brief meditation and within a minute Riz was gone. I felt the energy change in the room as Riz’s guide entered his body. He shifted in the chair and leaned forward resting his arm on his knee. His face morphed into a more intense expression, serious and smoldering. Chief Red Eagle had apparently arrived. His voice became deeper and more commanding. Riz scanned the room before speaking in an American Indian accent.

Red Eagle proceeded to give a fascinating talk about our human definition of reality, love, and how we relate to each other. He then greeted each of us individually and relayed a message from our guides.

I’d wondered how Riz came to be a channeler and how he connected with Red Eagle.

Born and raised in New York of East Indian parents, Riz understood that the Universe is in your heart. At the age of seven, he knew that a person had died on the couch where he was sitting. 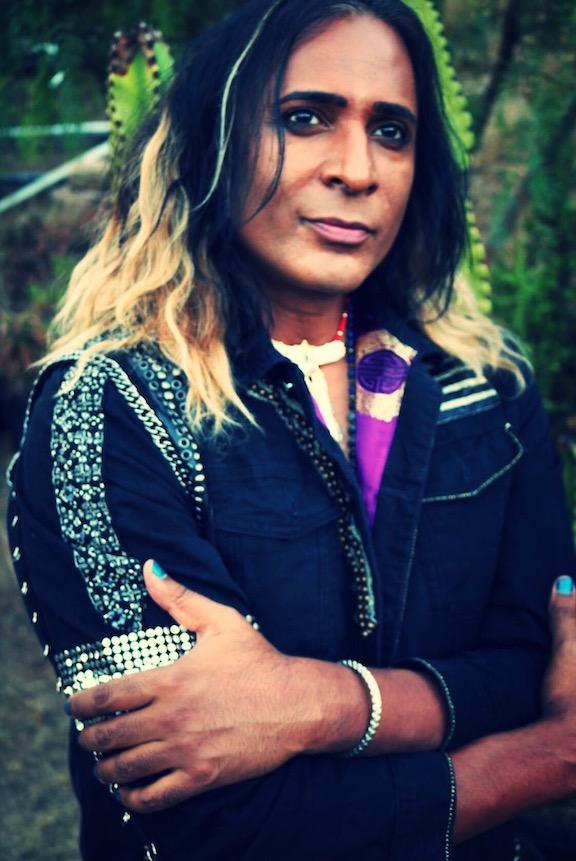 Around ten, he met one of his first spirit guides. Abraham Lincoln also appeared in his visions.

Wherever he would go, Riz started receiving messages for people, on the subway, in the street, and even for his co-workers at the moving truck and catering company he worked.

Soon he began holding group readings, relaying poignant messages from spirit guides. In 2008, at thirty-eight, the guides told him to move to California, even though he knew no one there. That’s when Red Eagle began communicating.

As the evening unfolded, we witnessed an interaction with a man named Cesar, whose His father had recently passed away. Cesar was hoping for a message and hadn’t met or communicated with Riz before that evening and had just shown up. When Cesar said his father’s name, Red Eagle paused for a few seconds before turning to a woman sitting on the staircase.

“That your father too?”

“The light fly over to you. That how I know is your father too.”

Finally Red Eagle turned his attention to me.

My eyes filled with tears. As an author of five books and  countless blogs and articles, I knew my spirit guides were encouraging me to get back to writing since I had slacked off the past year. Red Eagle shared a couple more details that no one could have known.

Riz and his wife Oriah are a constant and great example in the spiritual community of Los Angeles, with many exciting projects in the works, Riz and Red Eagle will be transmitting messages for many years to come!

I recently video interviewed Riz Mirza about his weekly Circle of Light in Los Angeles, and the magical spiritual retreats he leads to India, Ireland, Egypt, Japan and the Galápagos Islands.

POSTSCRIPT  The folks at Burger King must read WONDERLUST… Soon after our piece ran, they auditioned and hired Riz for this brilliant ad they’re running this Halloween season!

The highest cocktail bar in the Western Hemisphere is in the Wilshire Grand Center, Downtown, Los Angeles 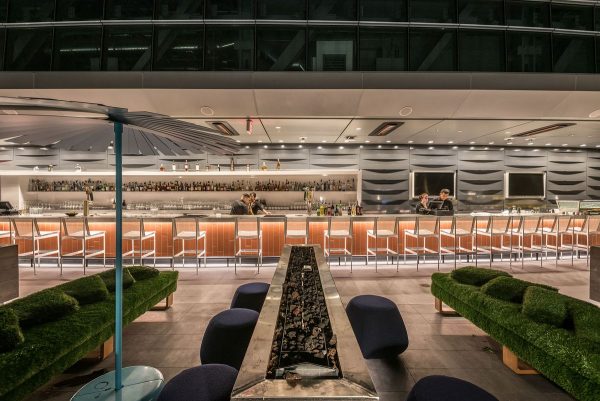