Every fisherman fantasizes about the ultimate day of fishing. A pristine wild river. No people for miles. And of course fish lining up to take your lure! This is the dream that motivates thousands of fishing enthusiasts to book salmon and trout fishing trips to Alaska every summer.

For most anglers, reality never quite lives up to the dream. Even well-heeled visitors who pay up to $10,000 for a week for “fly out lodges” miles from the nearest road and only accessible via float plane often find themselves sharing their fishing spot with other lodges.

And for those who can’t afford a float plane, fishing from Alaska’s road system can be downright brutal. Indeed, there’s parts of Alaska where hundreds of fishermen are literally shoulder to shoulder at the height of the salmon run. There’s even a term for this: combat fishing.

Bucolic, isolated fishing does exist in Alaska, but it is never guaranteed.

So when my bush plane landed on the gravel airstrip five miles from Icy Bay Lodge in Southeast Alaska (65 nautical miles from the nearest human settlement), I tempered my expectations of truly isolated Alaskan fishing. I couldn’t have been more ecstatically wrong. 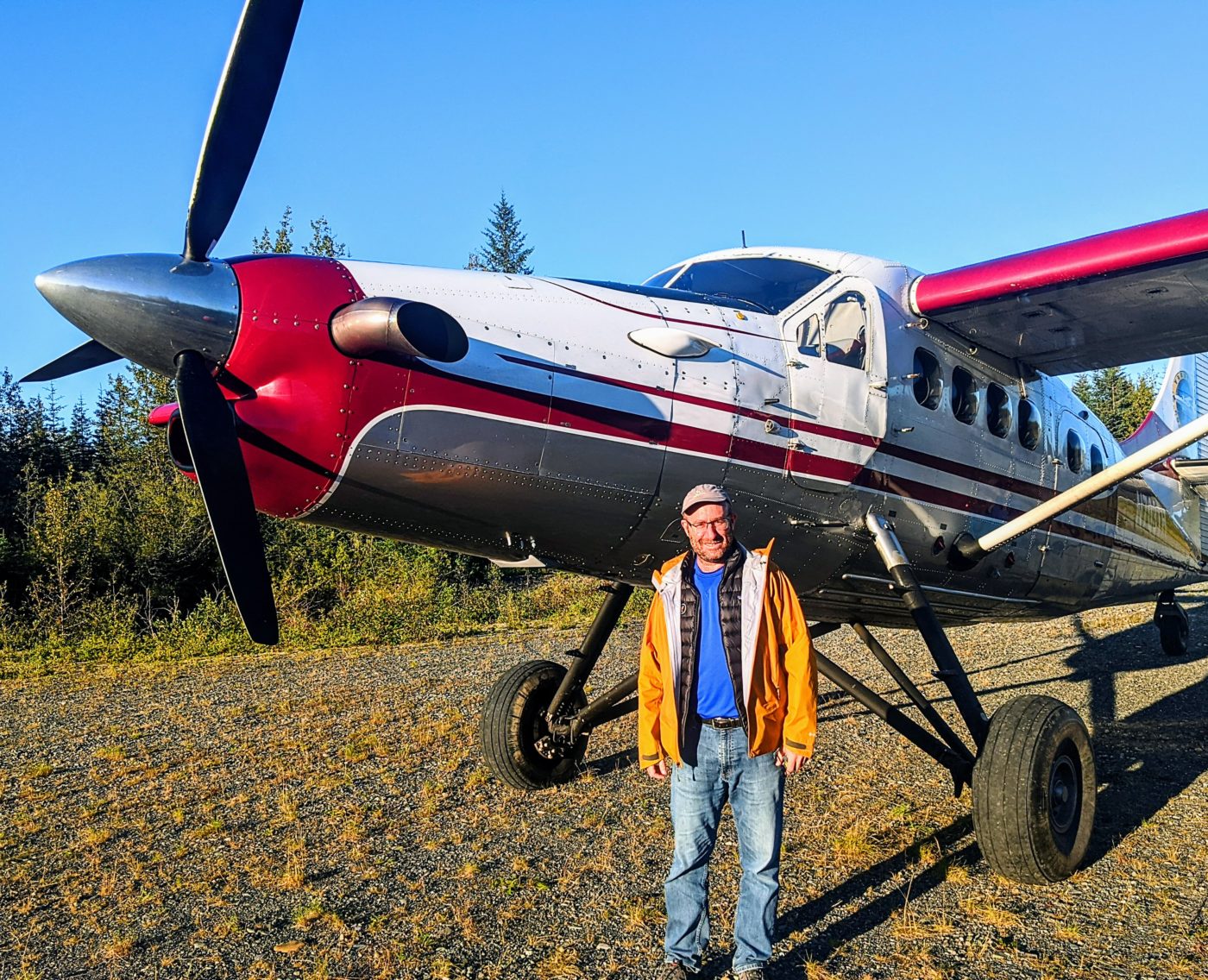 It turns out, if you want to fish without any other fishermen, you have to work for it. And at Icy Bay Lodge, that’s exactly what you do — each and every day. That’s because getting to the fish from the lodge requires a lot of patience and resolve. To put this in perspective, on day one of our adventure, nine people left the lodge to go fishing. By day five, only four ventured out.

Here’s how your fishing day unfolds at Icy Bay.

After eating a hearty breakfast in the lodge, it’s time to load up the Bandvagn 206, a Swedish military transport vehicle used by the US Army. Imagine a snowcat from a ski resort, but splashing its way through old logging roads that are often submerged in several feet of water. 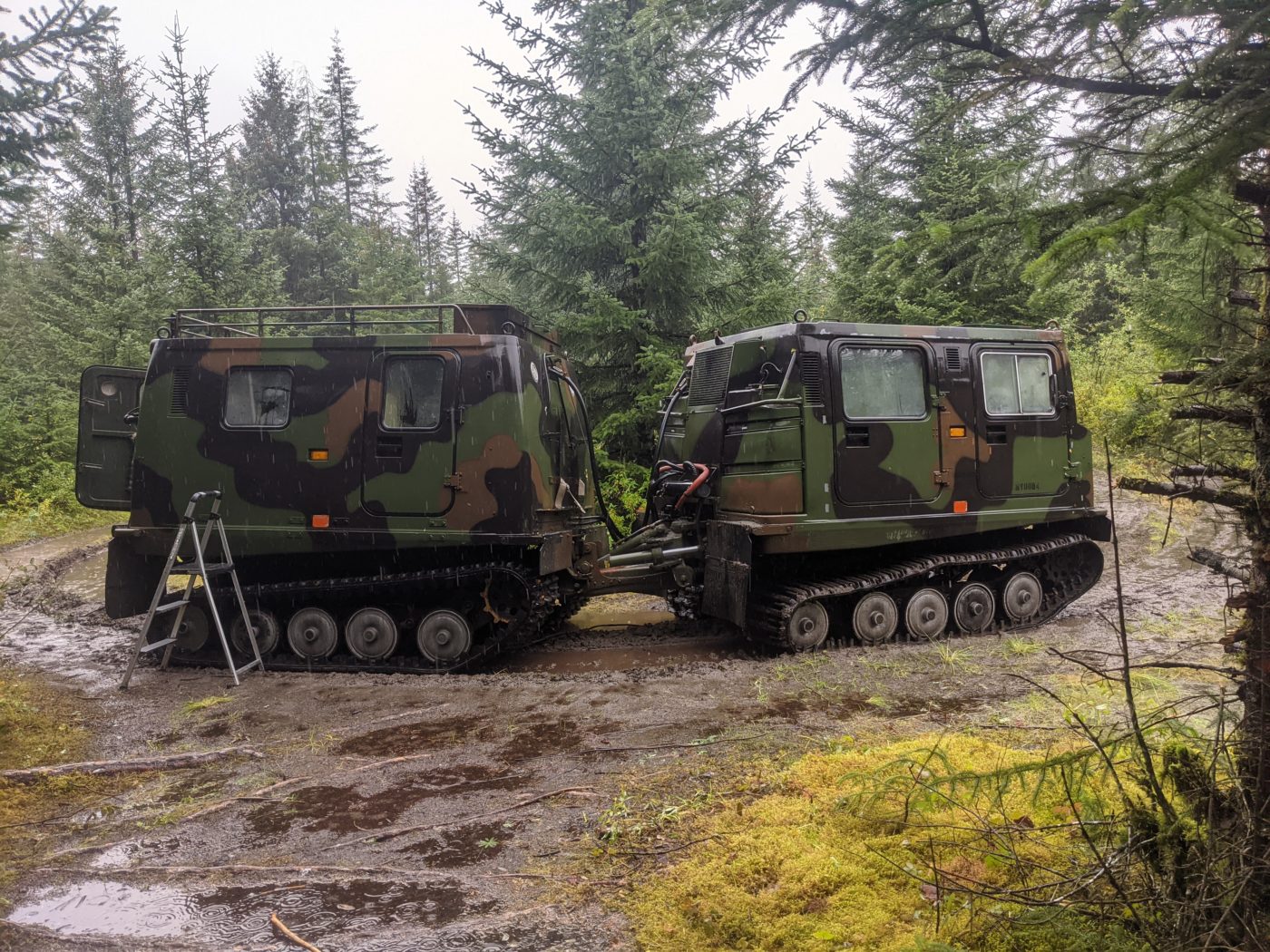 The road is overgrown with brush, making sticking your head out of the window a career-limiting decision. There are also numerous moments when a normal 4X4 would tip over due to the grade of the road — not a problem for the Bandvagn. It’s unclear whether shock absorbers are an available feature on the Bandvagn, but if it is, this one doesn’t have them!

After about 35 minutes of trogging through the bog, we stop. I assume we’ve reached our destination since we’re at the banks of a body of water. I jump out and excitedly waited for our guides to point out the choicest fishing spots.

Instead, I watch as the guides unload the gear from the Bandvagn and put it all into waiting skiffs.

Step 2: Through the Marsh

We hop into the boats and start to make our way through what feels like the Alaskan version of the Amazon river. Our guides navigate narrow pathways of water — branches smack us in the face. On one day, a branch knocked an angler onto the floor of the boat and knocked a guide into the water. Fortunately for him, he had a belt that tightened his waders. Had his waders filled with water, he would have sunk to the bottom in seconds. 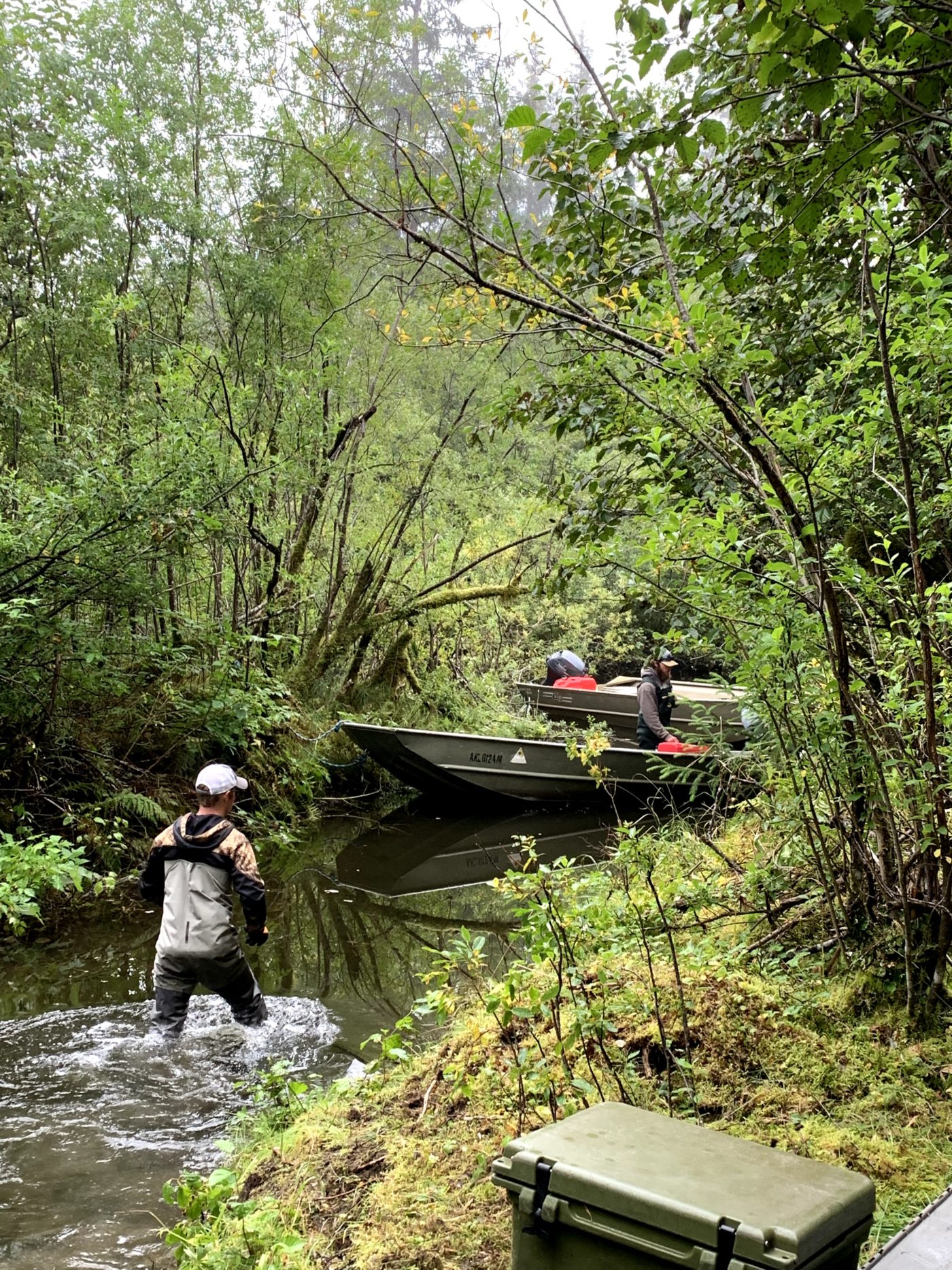 After about ten minutes, the river broadens into a marsh. The head guide, John, explains that this used to be where the fish were, but the 50 foot high winter waves from the ocean “moved the river” and now this is just backwater. 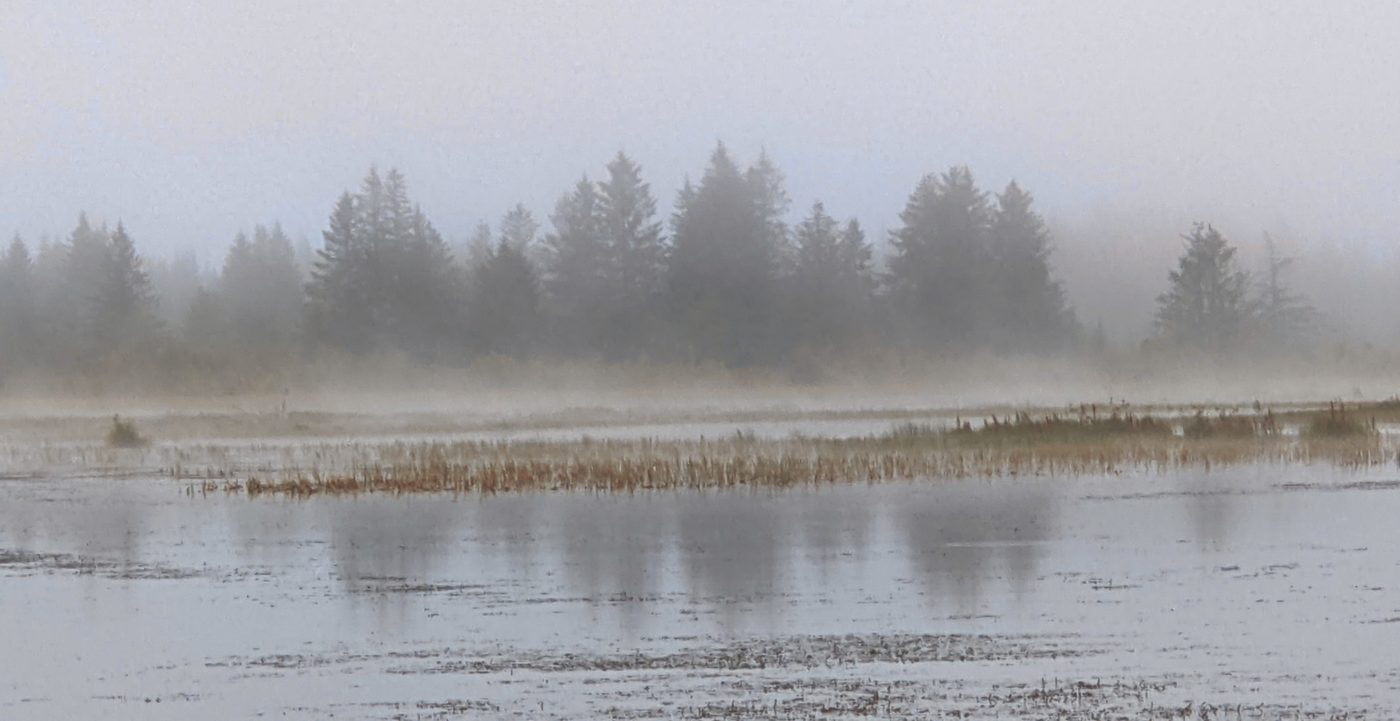 We pull the boats into the reeds on the edge of the marsh. Time to get out! We jump out of the boat into two to three feet of water (we’re all wearing waders). Everyone helps to bring the gear from the boats to the waiting ATVs. On the first day, one of the guests trips on a floating log and nearly falls face first into the water (this was the first and last day of her trip — upon returning to the lodge, she asked to return home. The lodge got a bush plane to pick up her and her husband two days later).

Alaskan fishing is not for everyone.

Waiting for us on the beach are ATVs with trailers. There’s not much sign of humans, but plenty of evidence of other large carnivores nearby. Indeed, not five minutes into our ATV ride, we spot a large male bear sprinting towards the bushes. Moments later we see a sow and cub. Fortunately, all the bears seem pretty petrified of us. I suspect that the loud motors of the ATVs are a new and annoying sound they’d rather avoid. 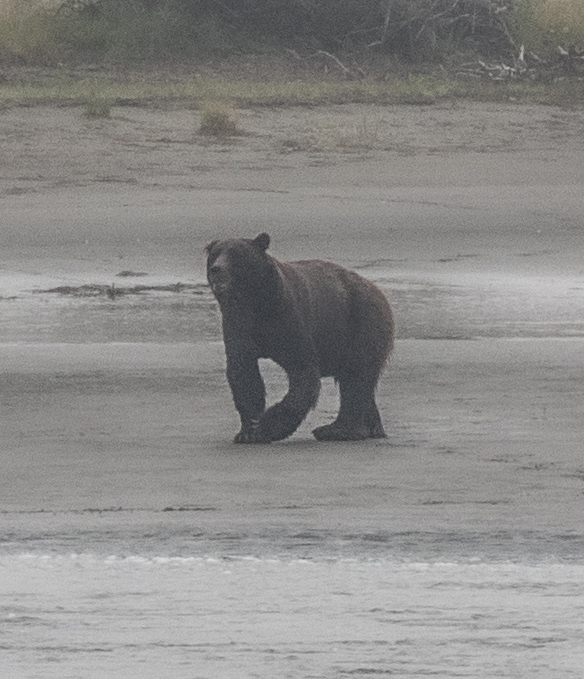 An adolescent male bear checks us out *** David Rodnitzky ***

We drive along the beach. Driftwood is strewn everywhere. The combination of sand and glacial silt creates a moonscape. On some days, the waves seem to be at least 15 feet high. Seals bob up and down in the surf, a good sign that there are fish nearby. 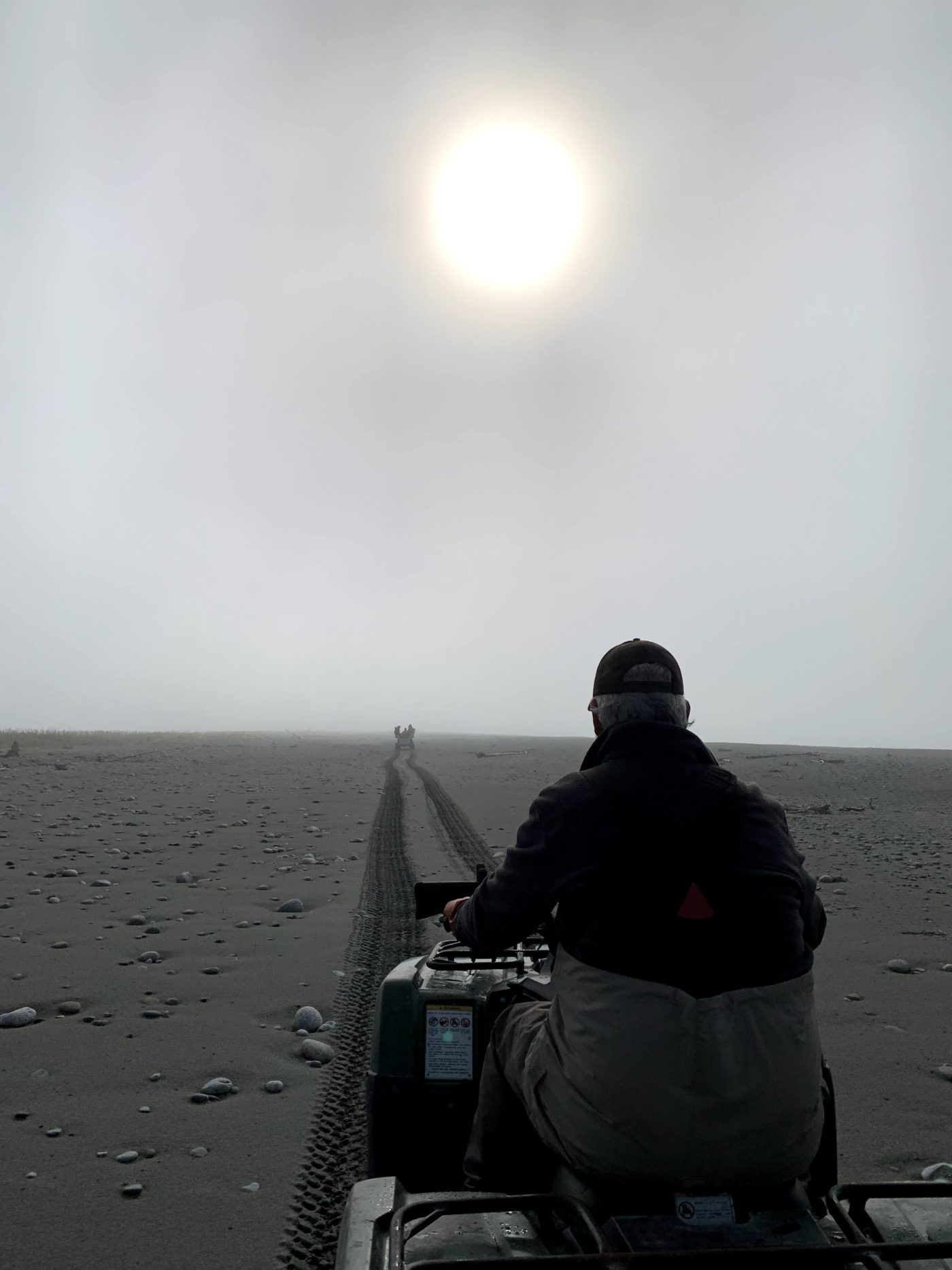 After about fifteen minutes, we pull up to the banks of the Yahtse River. The Yahtse is a large river — probably 100 yards across. If it was near a major city, it would be a focal point of the community. Instead, it’s not even labelled on Google Maps (and the one photo you’ll find online was recently uploaded by one of my travel companions).

Finally, it’s time to start fishing. It’s taken us an hour and three modes of transportation to get here. The first angler throws in her line and — bam! — a beautiful ten pound silver salmon strikes the lure! In short order, all nine of us are landing tons of fish.

Toward the middle of the day, John suggests that we explore a new part of the river. To get there, however, there are two challenges. First, we have to ford the river. It’s not too deep but the glacial silt sometimes turns into quicksand and can transform what looks like 18 inches of water into three feet (this happened to one of the other guests and I had to use all my strength to pull him out of the river). 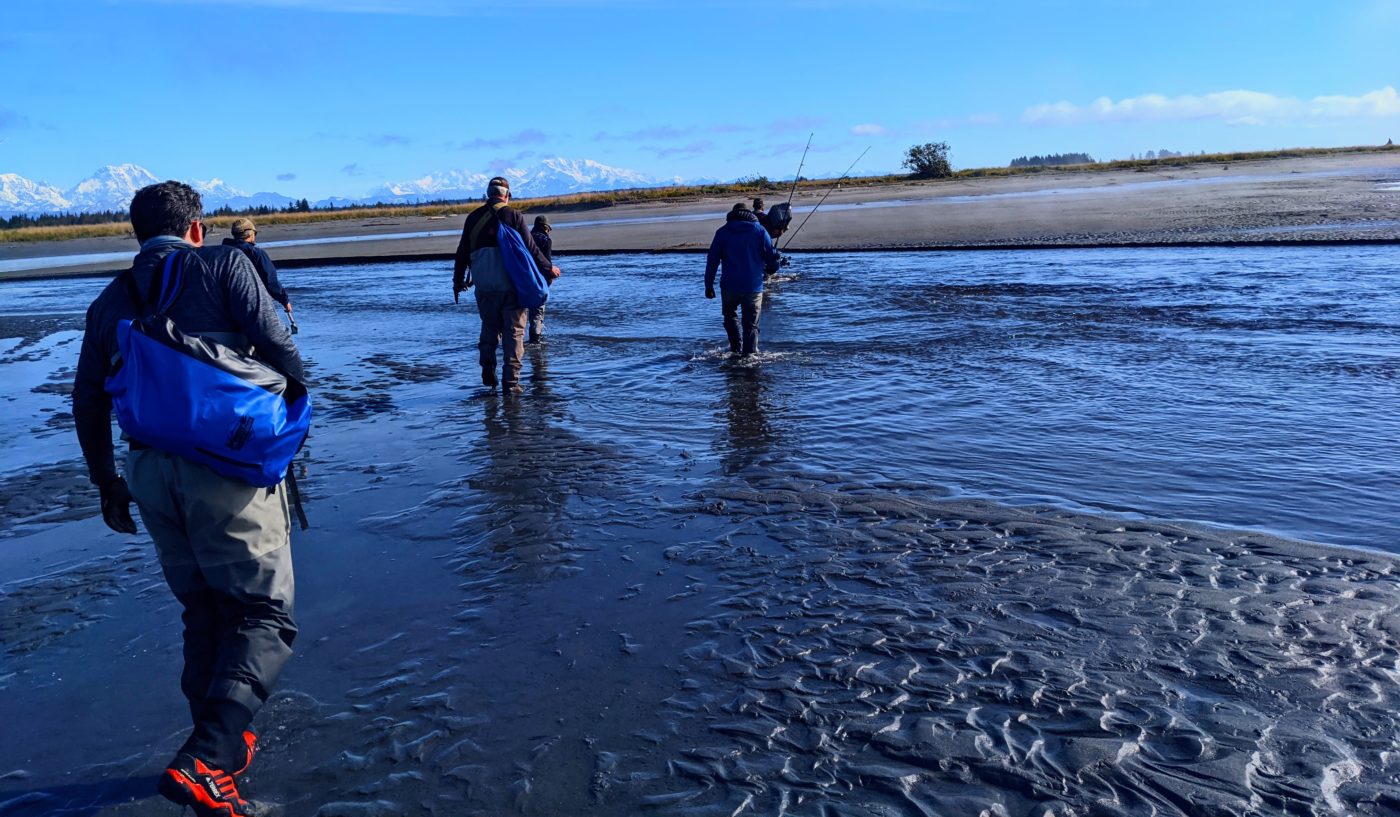 Challenge number two is that the part of the river we want to check out is clearly part of a “bear highway,” a path that is frequently used by numerous bears, as evidenced by the plentiful bear scat, bear tracks, and bear beds (cleared away brush where a bear has been napping). It doesn’t help that there is high brush and we are walking upwind.  We’ve already seen that the bears are doing their best to avoid us, but surprising a bear never ends well.

We shout “hey bear!” as we stomp through the thicket. Fortunately, our timing is good and the bears are somewhere else. 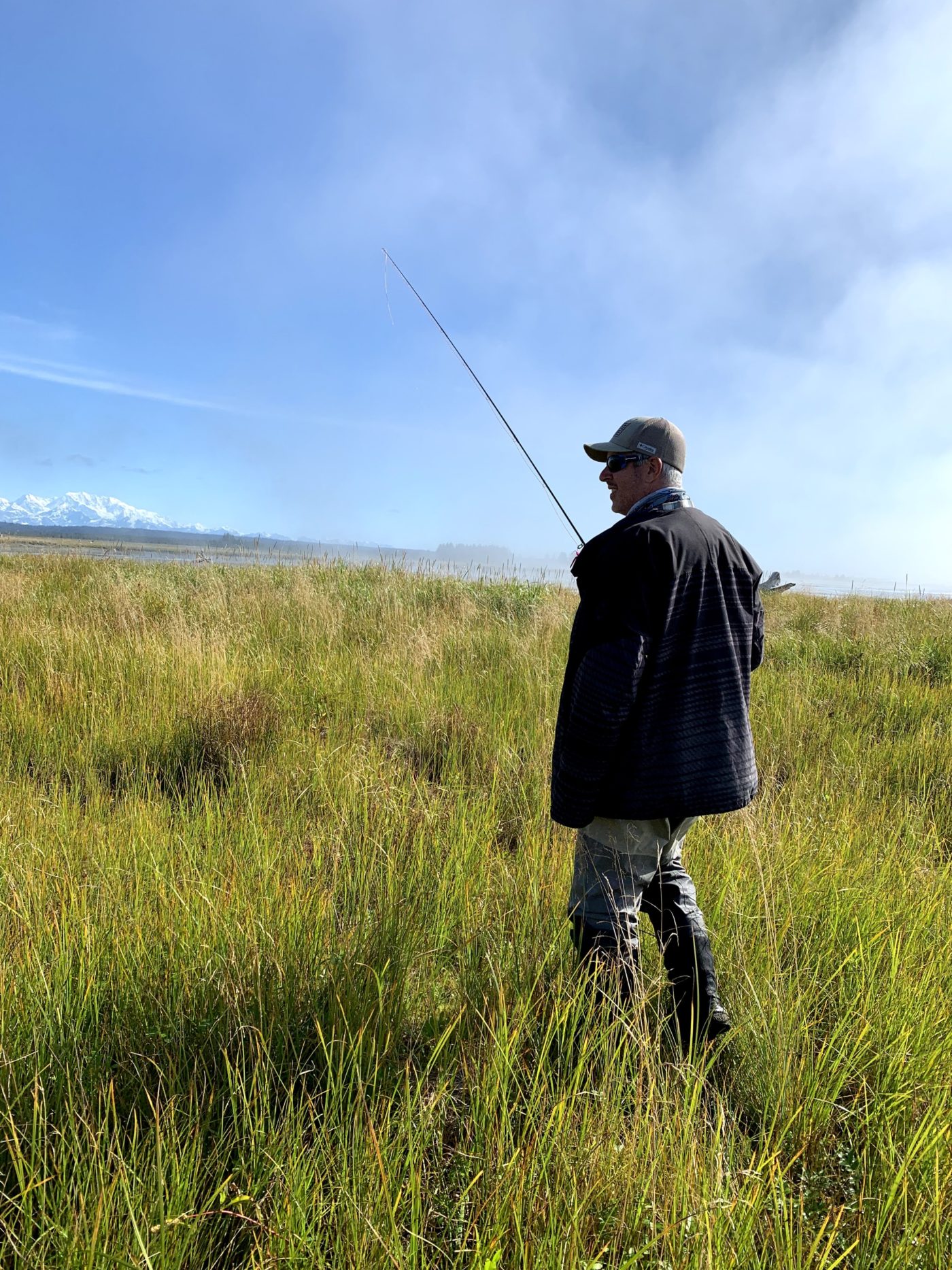 Walking through the brush to get to the fishing *** David Rodnitzky ***

As good as our first fishing spot was, this one is ten times better. At times, we catch fish on every cast. The guides run back and forth helping unhook fish that we want to release or killing the fish we want to keep. The limit for silver salmon in this part of Alaska is four fish a day – we only keep the male salmon, ensuring that the females can release their eggs upstream and maintain a healthy population into the future. On the best day, I catch and release more than 40 salmon. 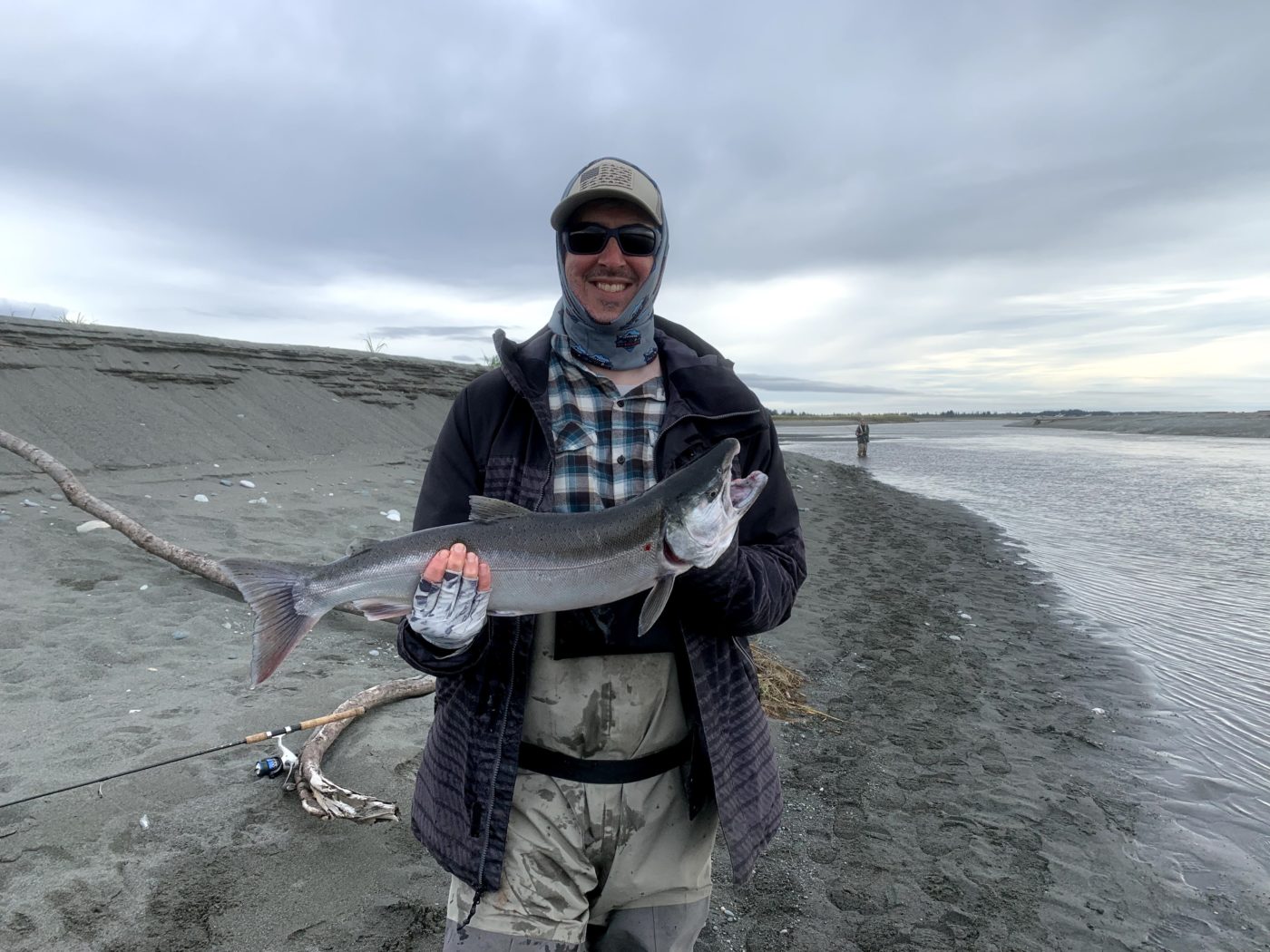 The weather on the first two days is amazing. Clear skies and temperatures in the high sixties. The mountains of Wrangell St. Elias create a stunning background.

On the third day, the weather changes. Low clouds obscure the mountains and it starts to rain. Despite numerous layers of waterproof gear, it’s impossible to avoid the wetness. The guides collect driftwood and create an eight foot high bonfire on the beach, but it’s hard to stay warm. 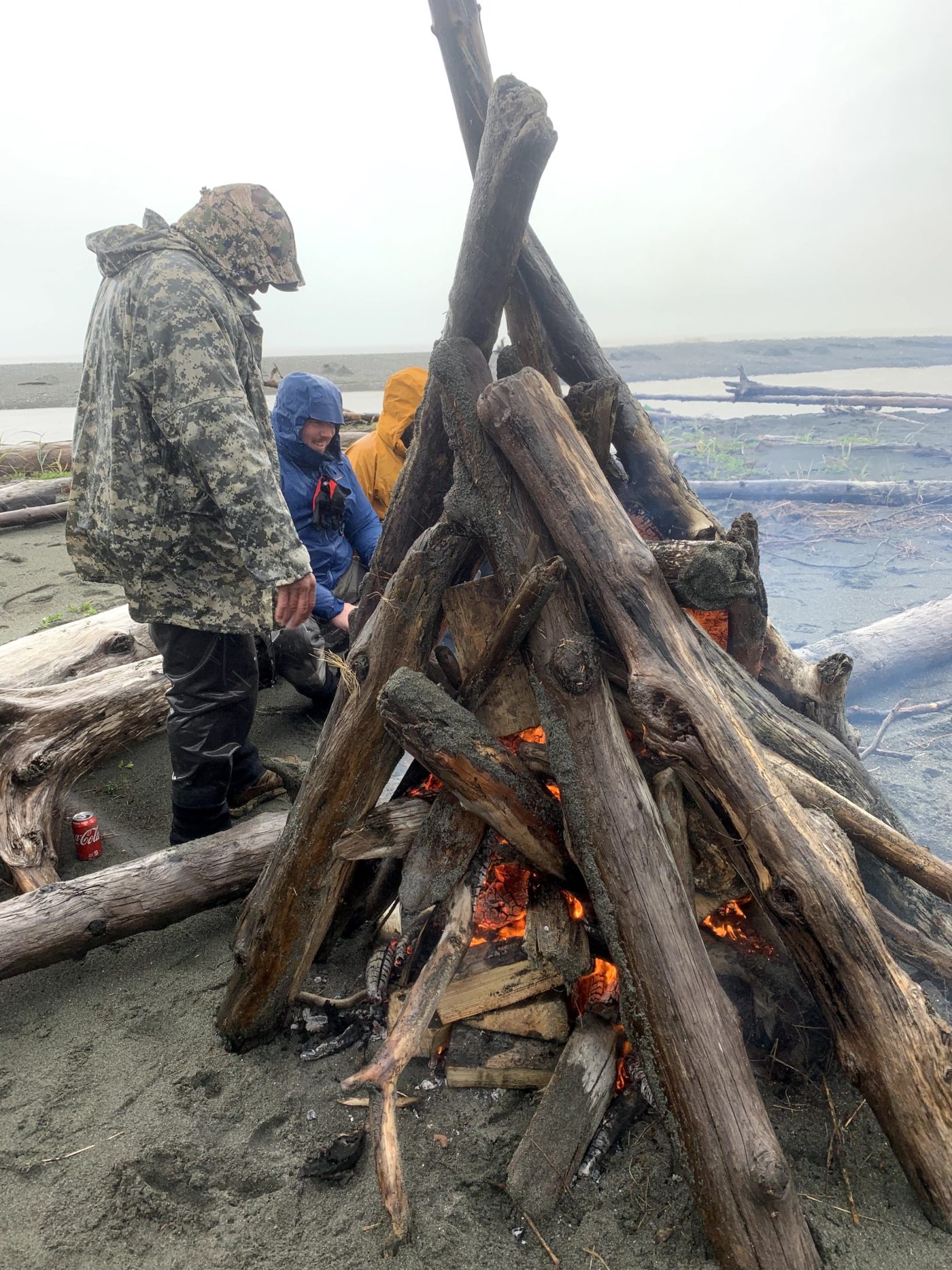 Trying to stay warm by the beach bonfire *** Doug Tarr ***

The combination of wet weather and the long “commute” to the fishing is enough to make even the most enthusiastic angler wary about leaving the warmth of the lodge. On day five, three more guests decide to stay home.

We start the last day quickly bagging nine fish. We throw them into a four foot long plastic box on the beach near our ATVs and ford the river to the other spot. After a couple of hours of non-stop action, we return to the ATVs, only to find that the salmon — and the plastic box — are gone. With no bear tracks present, or any noticeable rise in the water level, we can only conclude that a few clever seals swam up the river and dragged our catch out to sea.

So instead of bringing home 80 pounds of salmon, I only return with 60. If that’s the price of having an entire river to yourself, I’ll take it.

Icy Bay Lodge describes itself as “truly remote fishing.” I’ve been all over Alaska and I can confirm that few lodges give you the Alaska wilderness experience the way Icy Bay does.

It’s a place where the journey is as exciting as the destination. If you want designer down comforters and an easy stroll out the front door to a fishing spot, look somewhere else. If you want a real wilderness fishing experience, you’ll be hard pressed to outdo Icy Bay!

3 STUNNING SITES TO SEE ON AN ALASKA CRUISE

Why 2021 is the perfect time to visit Alaska

THE SLOW THAW OF CRUISING

As the world starts to reopen more than it closes down, here are the top cruise destinations 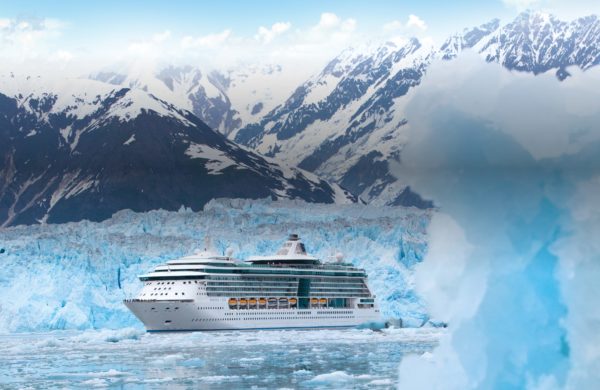