By Lucia Gillot and Emily Gatlin

Haiti and El Salvador are two beautiful countries. And Africa is a magnificent, stirring and magical continent. They have had terrible problems, some of their making, some not, and in degrees still have serious problems. But what countries don’t?

What follows is our Pop Up Guide to Haiti and El Salvador, two wonderful, gorgeous, fun, safe places to vacation. We highly recommend them.

WHY WE LOVE HAITI 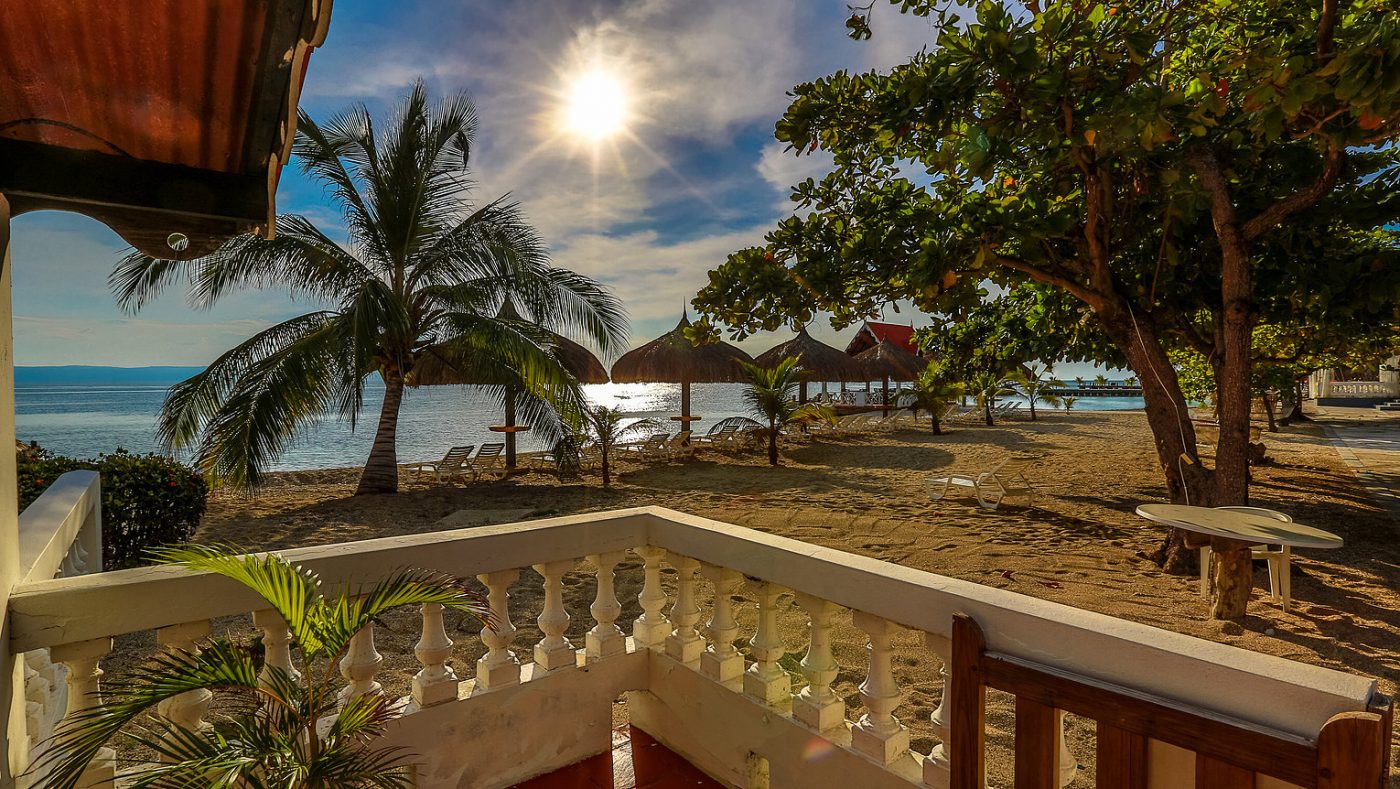 Smack dab in the middle of the West Indies, bordering the Dominican Republic and surrounded by five of its own idyllic islands, one of which is Tortuga (you’ve probably heard of that), and Jamaica somewhere off to the west, is Haiti. I know you know it because of the partially devastating Hurricane Matthew that came through just about 18 months ago, and the earthquake in 2010, of which, January 12, is the seventh anniversary, but you may not have really known where it was. So now you know where it is, in the Caribbean with 1,100 miles of coastline.

Recovering slowly but well, and still not, nor was it ever really, overrun with tourists, it is somewhat of a haven. It’s no secret that with all it’s natural disasters and humanitarian crisis — and throw in government corruption — Haiti is an anguished third-world country and one of the poorest on the planet. But it’s friendly, safe and beautiful, and tourists are welcomed and greatly appreciated

Its tropical climate is hot and humid but perfect around 80 and cooler in the evenings. Its rainy season is usually April thru June and October thru November, with the stormy season in between. It has several lakes and is also home to the second largest lake in the West Indies where you can see crocodiles and pink flamingos, like David Lynch designed it, plus beautiful, breathtaking rugged mountains. Lots of options for car rentals from the capital if you want to explore. And yes you do. 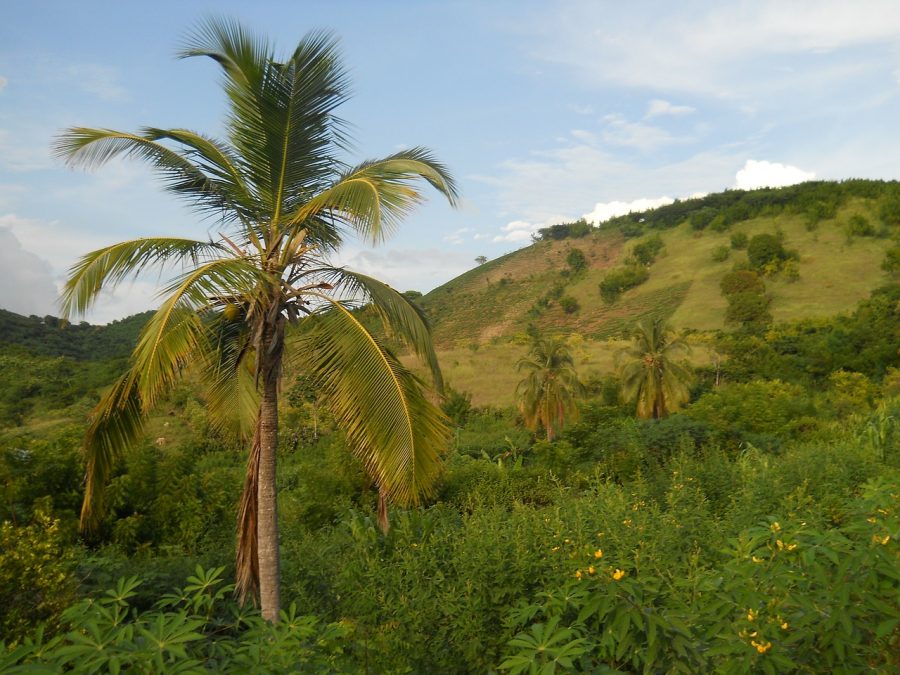 Haiti, the birthplace of voodoo as we know it (its roots come from Africa) has an eclectic culture that is a mix of African and European influences. The food is a blend of indigenous and international cuisine — Creole, African, almost Arabic spices and complex, tasty sauces, simple preparations using them, lots of fish and chicken and vegetables often combined with cashews. Delicious.

Its vibrantly colored gingerbread houses adorn the hills of the capital Port-au-Prince. 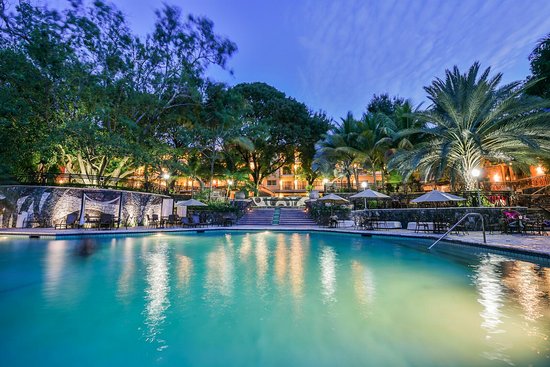 Overlooking Gonave Bay in Montrouis, Moulin Sur Mer offers everything you need for a relaxing (or not) stay, from their spa packages to dive packages. Everyone is happy. Stay in a beach bungalow or a suite. It seriously doesn’t get much better. www.moulinsurmer.com

A glorious, one-of-a kind hotel offering 174 spacious and uniquely decorated rooms, with balconies overlooking the city or the mountains. And free wi-fi. Good for conferences too. Bring the whole company! Field trip!

The Presidential Suite goes for around $900 per night and is not shoddy. Unlike the US President and his gutter mouth. karibehotel.com

From the NH Hotel Group, El Rancho in Petion-Ville is a scant four miles from the center of Port-au-Prince, but near the embassies, many restaurants and other hotels, as well as art galleries and great shopping. It also has an outdoor pool, casino and 24-hour gym. www.nh-hotels.com/hotel/nh-haiti-el-rancho

When restaurants don’t have a website, it means they’re too busy making delicious food. Papaye, considered the top restaurant in Port-au-Prince, may have slow service, but who cares when you can enjoy a stiff rum cocktail while waiting for your fried plantain with crabmeat and creme fraiche.

Highly regarded Italian restaurant and a break from local Creole. In Petion-Ville. You can walk it off on your way back to the hotel

Get a table in the pleasantly shaded courtyard of this converted house for a casual (all the restaurants in Haiti are basically causal) meal. Similar feel to New Orleans, and not too dissimilar food for the Crescent City. But you’re in Haiti. Score! 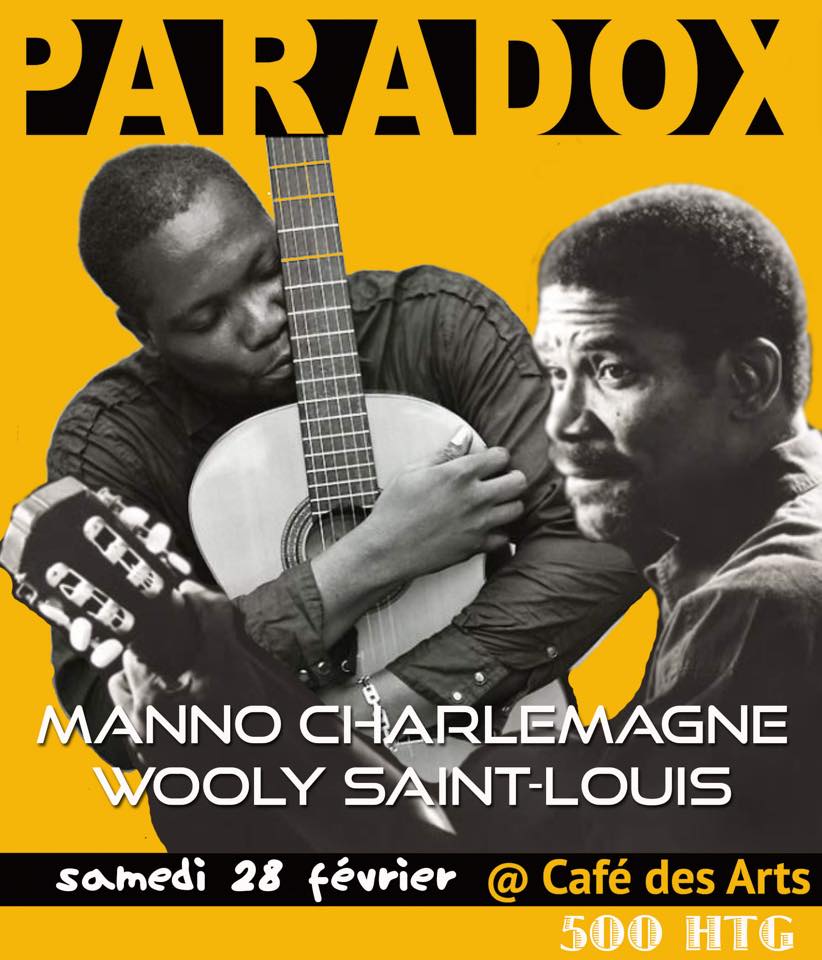 In Port-au-Prince, we love Magdoo’s for cool DJ’s and Lebanese cuisine. Bill Clinton’s been there. So has Sean Penn. And where those two have been, you can bet Bono has too. Because Bono does not like to be left out.

For art and music events, with an underground, deep roots cultural feel. Great live music. Very authentic, local, not a tourist spot. You could be stepping fifty years back in time. Who doesn’t want to do that? 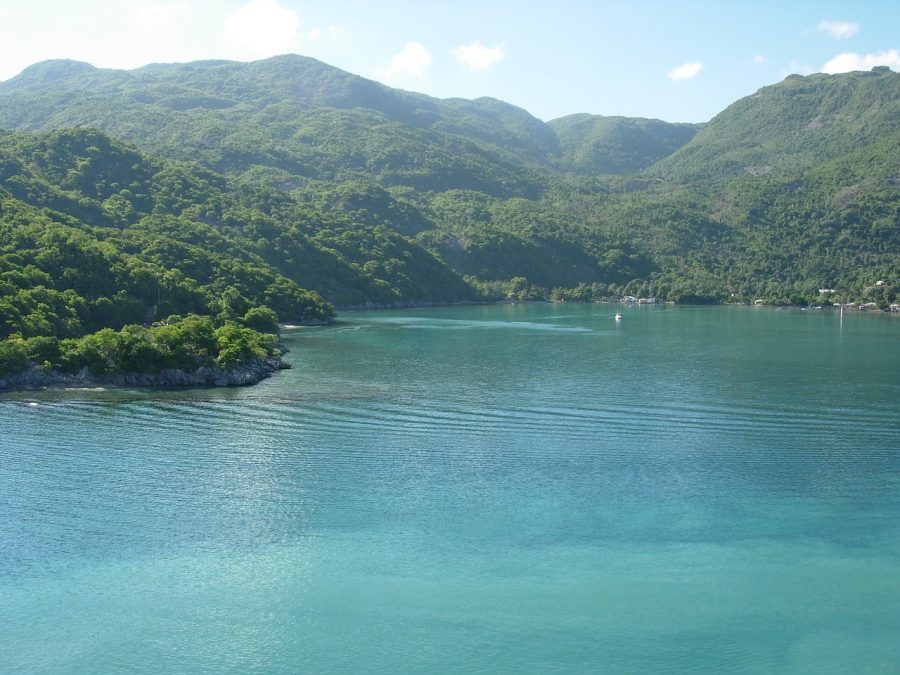 How green is my valley: part of Haiti’s gorgeous coastline

The Iron Market is a large covered market dating back from 1891 in Port-au-Prince where you can buy produce and handicrafts but not, we think, per se, iron.

Petion-Ville, in the hills above, where all those good hotels and cool, funky restaurants are, is the place to go for art galleries and shopping for anything from fruit to herbs and potions. You don’t get Haitian potions at the Rite Aid. In case you thought you did.

Around February/March (depending on the year and when Lent falls, so check) Carnival fills the streets of the towns, and it is magical, as it is throughout most of the Carribean. If you miss that, there are great music festivals around Easter. And you don’t have to pretend to be abstaining then!

Fort Jacques, a panoramic 19th Century fortress with views over the bay of Port-au-Prince.

The Musee de la Pantheon National Haitien is the place to discover the country’s rich, sometimes troubled history and culture.

Pic Macaya National Park is our pick for great for hiking trails and forested peaks. And, one assumes without actually knowing, for a picnic.

Visit La Citadelle La Ferriere, a mountaintop fortress close to the ruins of Sans-Souci Palace, the former home of Henry Christophe, a leader in the 13-year Haitian revolution which finally overthrew French dominion in 1804, and who became President and later proclaimed himself King Henry I, which stuck.

Bassin-Bleu, northwest of Jacmel, is described as one of the most stunning places on the planet. A series of blue pools connected by waterfalls, two of which are 75 feet deep, so beware. We don’t want to lose you, plus it’s better to get a guide to take you there unless you’re really hiking savvy.

Just want to snorkel, dive or relax at a spa? Head to the Cote des Arcadins and stay at The Moulin Sur Mer (see above).

Water sports and excursions can be booked through Marina Blue Haiti.

WHY WE LOVE EL SALVADOR 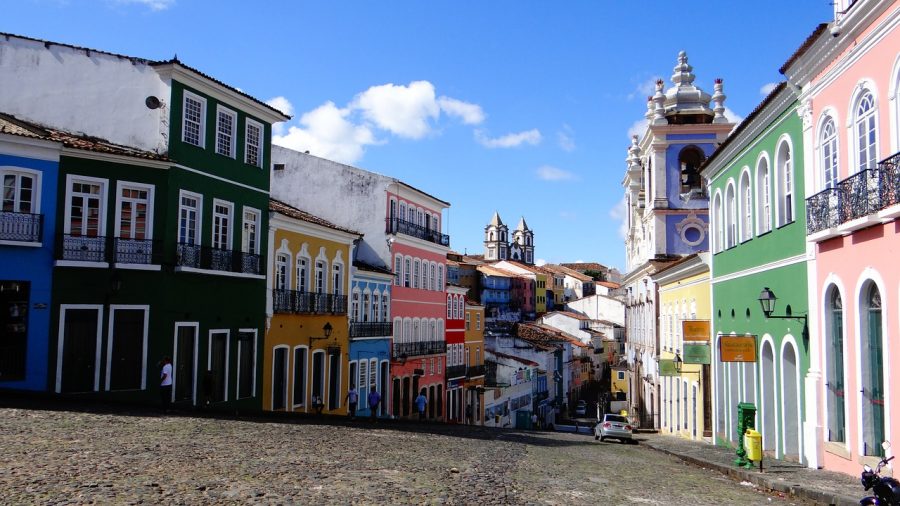 El Salvador boasts beautiful beaches, an ideal surfing environment and incredible mountain views. They’ve got a really high murder rate – so does St. Louis – but they’re also the most densely populated country on the mainland of the Americas, with 6.3 million people occupying 8,124 square miles, which is about the size of Massachusetts. Roberto Ayala Guillén, Specialist in Development of Tourism Products, told us the country’s people are a treasure, and they always welcome tourists from all over the world. They have a strong police force and are dedicated to keeping visitors safe.

Guillén also notes that El Salvador has a variety of natural resources like lakes for diving, sailing and aquatic sports, as well as volcanoes for hiking. Their culture is largely derived from the Mayans and Pipil people, who were the ancestral inhabitants of El Salvador. There are several locations to see Mayan ruins, including Tazumal, which was first settled around 5000 B.C.

The easiest route to this unique paradise is a flight to the capital city, San Salvador. Direct flights from most major US airlines and Columbia’s Avianca are available from New York (JFK and LGA), Washington D.C., Dallas, Atlanta, Houston, Los Angeles, Miami, and San Francisco. El Salvador is one of the gems of the Americas, vast swaths are greatly unspoiled, something that is less and less true of the world every day… 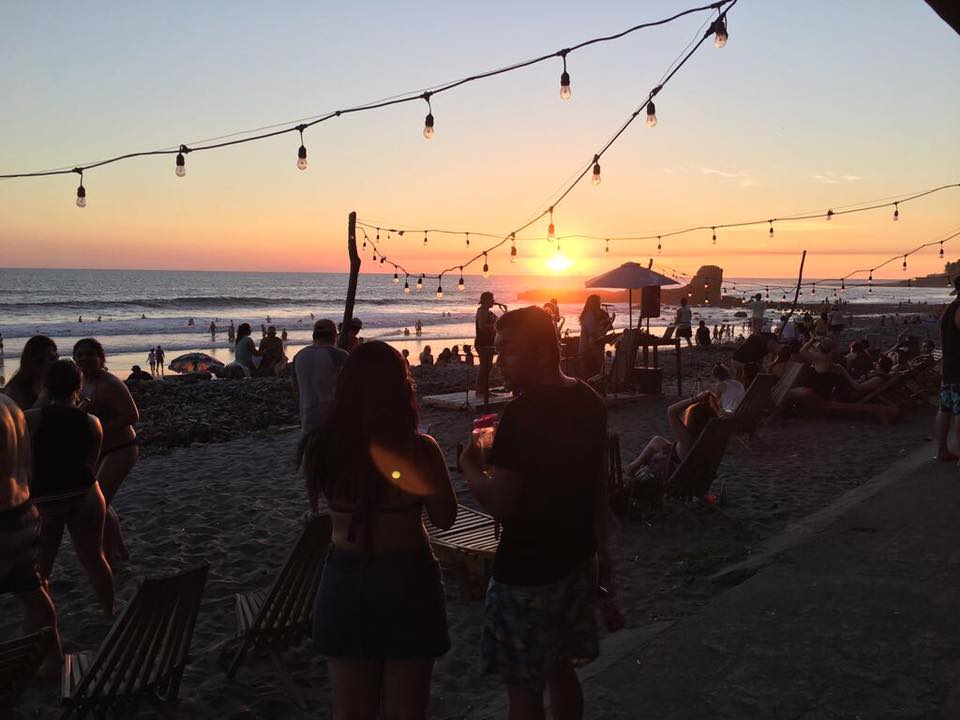 In El Tunco is a luxurious beach resort, and where you want to stay if you’re planning on surfing. Directly on Tunco Beach, Monkey Lala also offers one of the best nightlife experiences in El Salvador, with beachfront karaoke on Fridays and barbecue on Sundays. I.e., PERFECT WEEKEND!

In beautiful Playa Las Flores, on the eastern coast of El Salvador. Suites offer a 180-degree beach view, and you can book a special “Surfer Package” which includes breakfast, lunch and dinner with a daily boat trip to a secluded surf break. Where you, um, surf. 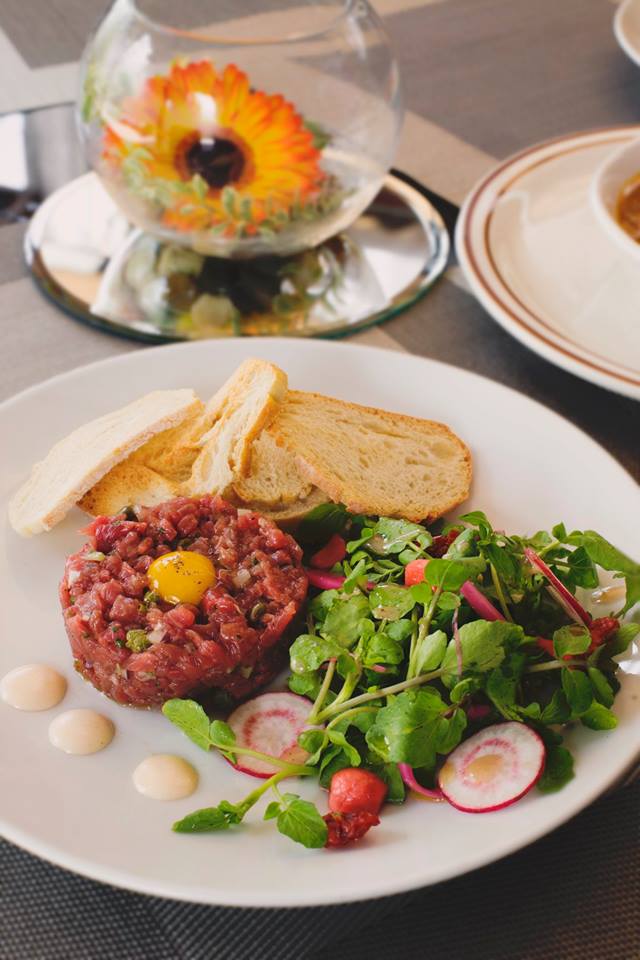 Steak Tartar: the most recent special at La Gastroteca

One of San Salvador’s fantastic culinary creations from French-trained Chef Fernando, who makes it his business to visit with patrons while they peruse the menu, which changes every two weeks.

Also in San Salvador is Irineo Gatronomia, a small upscale Latin restaurant with a Mediterranean flair. It’s located behind the Teatro Presidente, which is the home of the Orquesta Sinfónica de El Salvador (Symphony Orchestra of El Salvador). Dinner and a show!

Located in the Nico Urban Hotel (see above) San Salvador’s top Italian restaurant has been serving authentic cuisine for the past 14 years. And they have a wine club you can join!

These folks know what’s up — one of El Salvador’s major exports is hammocks. They’ve got hammocks all over the place, and they’re really big on afternoon naps. In November, they even have The Festival of the Hammocks. We’re down. 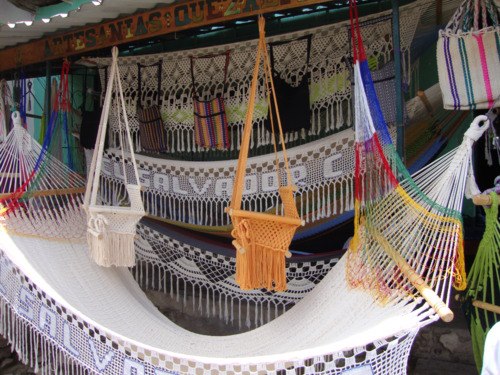 Soccer is the country’s sport of choice, to put it mildly, and San Salvador is home to Estadio Cuscatián, Central America’s largest stadium with a capacity of 53,400. For the sake of comparison, to the north, soccer infatuated Mexico’s national stadium Estadio Azteca, in Mexico City holds 87,000. El Salvador and Honduras once fought an actual war over a contentious soccer match, in 1969. (Read The Soccer War by Ryszard Kapuscinski.) 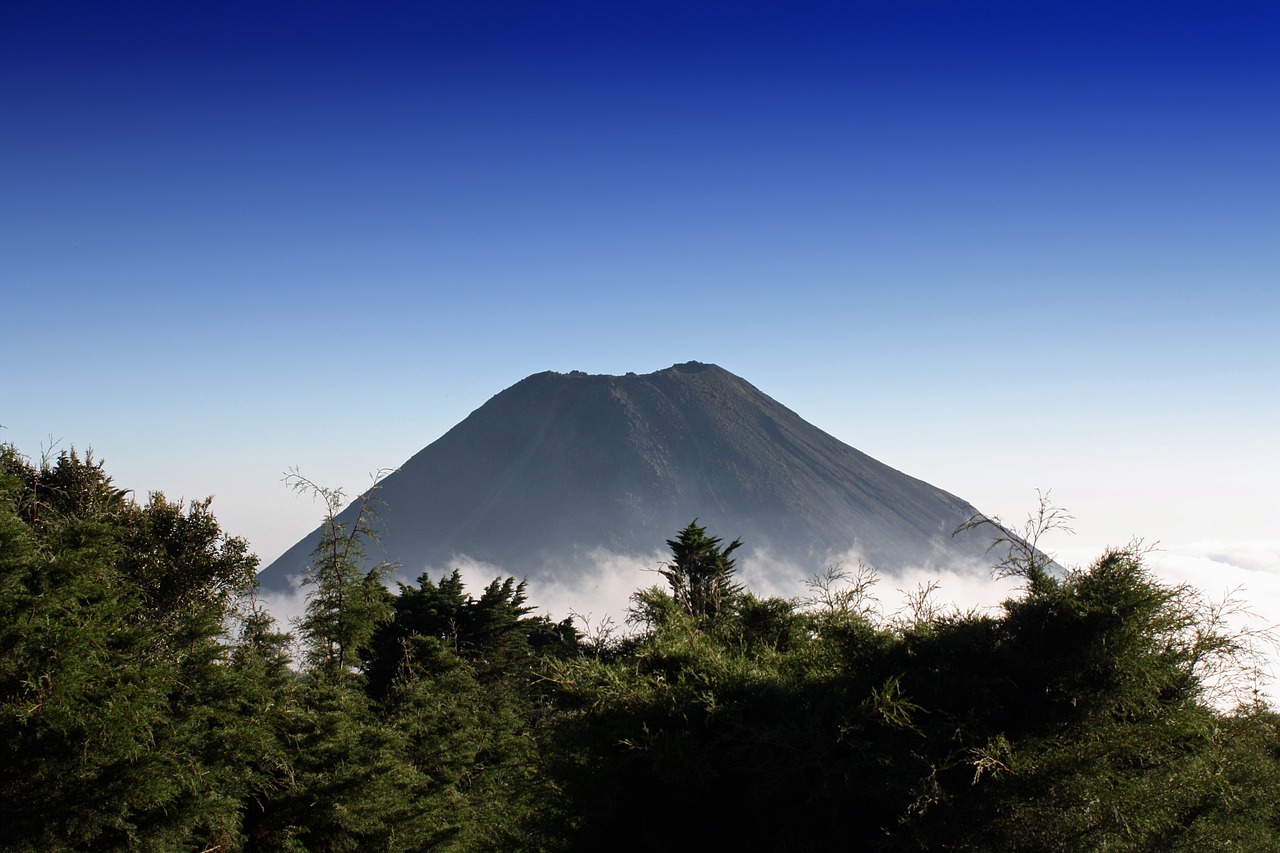 Parque Nacional El Imposible is the country’s largest national park, and along with the equally beautiful Parque Nacional Los Volcanes, it is home to over 500 species of birds and mammals.

Hope you like to dance and party hard, because El Salvador sure does!

Cadejo Brewing Company in Juayúa is a brewhouse known for its live music scene and delicious beer, and is the second largest craft brew producer in the country. (Cervecevia La Constancia reigns as the supreme brewer, before you get all verklempt.) They also have an extensive cocktail menu and some good eats.

BarBASS is a pub in San Salvador, serving up traditional greasy drunk food and straight rock and roll. I mean, you may not have to leave the States for that, but… here you won’t know anybody and if you do it in, say, Pittsburgh, you can’t go to a gorgeous beach in the morning and sleep off the hangover on white sand.

Cafe Bar El Necio is a bar where veterans of the civil war from 1980 – 1992, from both sides hang out to drink and reminisce. Yes, reminisce! That’s the civil part of civil war, I guess. This place is fun and unique, and friendly.

So, whether you’re into sun, sand, surf, hiking, and yes, even naps (our favorite!), El Salvador is an affordable and delicious trip for all types of vacationers. It’s laid back, it’s beautiful, and it’s not overcrowded. It’s definitely not a shithole.