When you think of America’s important music locations, you might first think of the Mississippi Delta and the South where the Blues came from, or New Orleans, which birthed jazz, or New York, Chicago, even L.A. But Seattle, and the Pacific Northwest, hold a significant place when it comes to American music.

The infamous “Louie Louie” (a staple of every rock band ever formed, or yet to be formed) was recorded in 1957 by The Kingsmen, from Portland. The impossibly simple song has been called both “a law of nature” (Greil Marcus) and “a cornerstone of rock” (The New York Times). Neither is an exaggeration…

A decade later, left handed Jimi Hendrix, born in Seattle and its most famous guitarist, if not son, turned his electric guitar and then the rock world upside down. (Bit of trivia: Seattle was the final date on The Kinks’ US tour in 1965 —  they were denied US work visas for another four years, a lifetime in the heyday of the British Invasion, and they didn’t come back until 1969, by which time it was too late.)

Flash forward a quarter of a century, and Kurt Cobain (from nearby logging town Aberdeen) and Nirvana, followed by a gang of generation-defining bands including Pearl Jam and Soundgarden, spawned the grunge sound, which ripped the roof of rock ‘n roll, and maybe buried it too.

That musical history seems never too far below the surface in and around Seattle.

On a recent trip there, I stayed at the Seattle W Hotel, a wise choice FYI. Seattle is a beautiful city, a bit underappreciated, a bit forgotten. It’s not the rainiest city in the US, as is often thought (it’s not even in the top 30 — Miami is number one, before you go looking it up). And it’s not, by a mile, the windiest (neither is Chicago, by the way — Dodge City, Kansas is. You’re welcome). 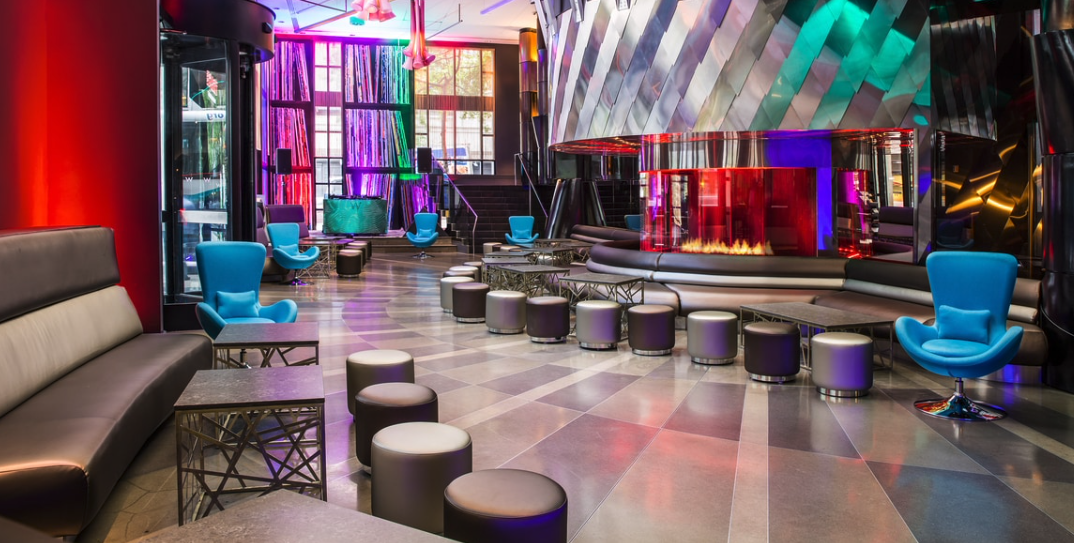 The very cool Living Room at the W

Back at the W, music does not go unnoticed. Adjoining the lobby is the we-gave-up-trying-to-name-it The Living Room, an area in which to hang loose during the day and catch some wonderful musical vibes at night. Each Friday and Saturday the hotel coordinates with legendary local radio station KEXP-FM to spotlight local bands. 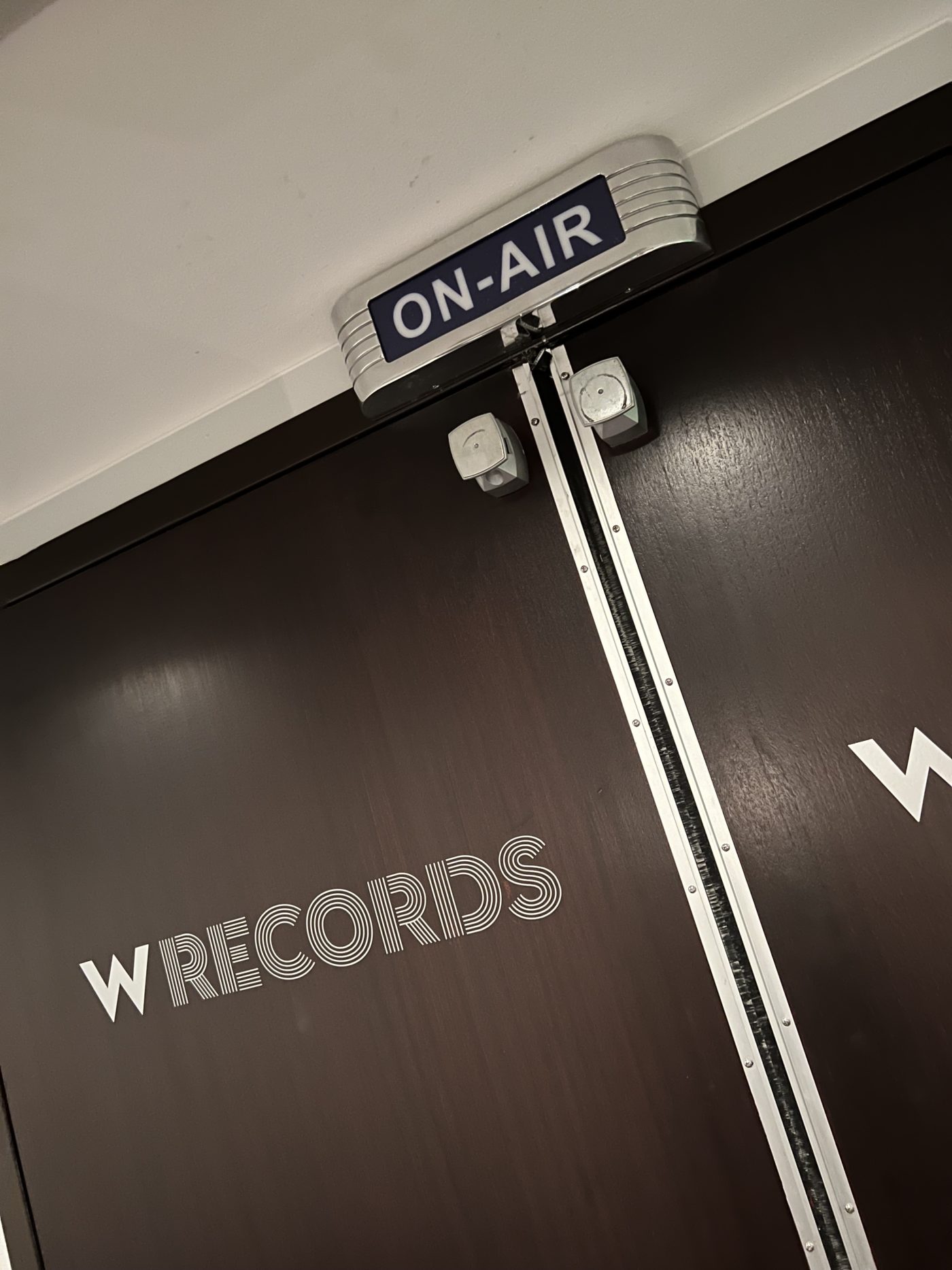 Murals with a music theme have been painted by the hotel’s resident yoga instructor (why not?) and there’s an oversized vinyl album library against the far wall.

On the top floor of the hotel is a recording studio, available for resident guests, or visitors, to lay down tracks, perhaps inspired by Seattle’s musical ghosts. Surprisingly, it is the first such studio in a US hotel. (Memphis, WTF? Are you asleep at the wheel?)

It is impossible not to notice The Space Needle when in Seattle, and after a $100M refurbishment, a visit is recommended, and justified. The once revolutionary revolving restaurant has been replaced with “The Loupe,” the world’s first revolving glass floor. And, frankly, maybe there’s a reason for that. After getting to the top of the Needle it was great overcoming the initial vertigo and then watching new arrivals do the same.

The original structure was created for the 1962 World’s Fair and now has an additional 176 tons of glass. The 605 foot tower gets over a million visitors per year.

We gaped at the expansive view of the Puget Sound and the city below. Almost directly below us was Chihuly Garden and Glass, an indoor and outdoor museum dedicated to the glass blowing art of Dale Chihuly. Born in Tacoma, he studied at University of Washington and Rhode Island School of Design, returning to the Pacific Northwest after an apprenticeship in Venice.

His impossibly colorful, delicate yet robust glass sculptures are arrayed in a series of galleries. Chihuly’s homages to the ocean are especially compelling. Stepping outside you see his work integrated with lovingly tended flora. It is a touch surreal, in the same way that James Cameron’s visions in Avatar are different yet eerily familiar.

A great way to enjoy the outdoor component of Chihuly Garden and Glass is to watch demonstrations of glass blowing design and then kicking back with a wood-fired pizza and a local ale, a perfect way to contemplate the arts that combine fire and the earth’s elements. Chihuly Garden and Glass is open year round (picture a fine dusting of snow on the outdoor displays), and commendably donates a portion of proceeds to local arts, kids organizations and public schools. 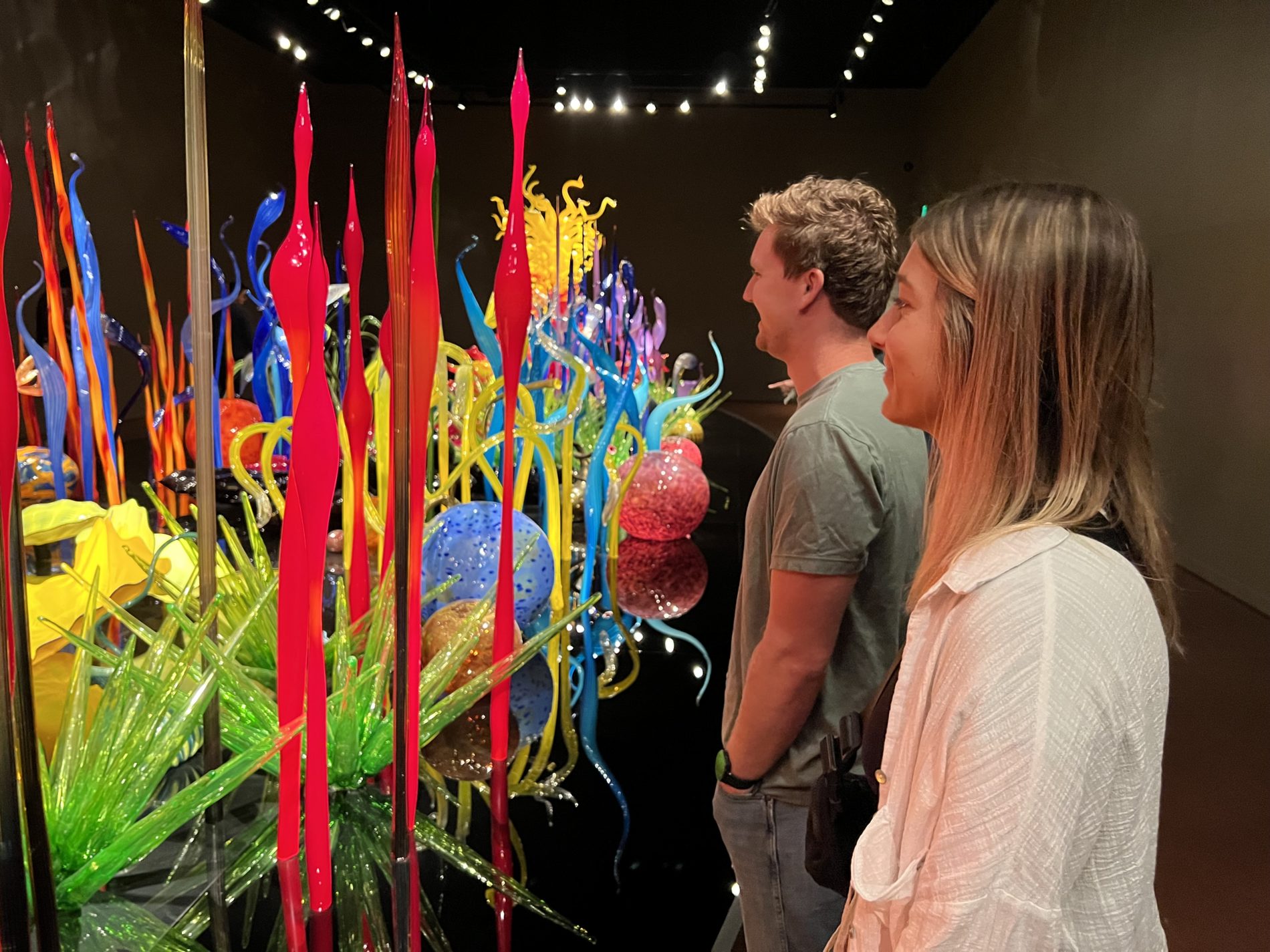 Brad’s kids at the Chihuly Garden and Glass museum, who are glad they came after all

Other great stops in Seattle should include Pike Place Market and The Edgewater Hotel. The former is one of the largest and oldest public markets in the country, spanning nine acres on Seattle’s downtown waterfront. A non-profit board oversees the operation, which helps maintain its eclectic diversity of shops and eateries on offer. Not surprisingly, there is an abundance of seafood on offer, both raw for preparation at home or available at several restaurants. Locally sourced flowers, vegetables and fruit stalls are scattered among regional artists’ booths.

The Edgewater Hotel deserves its own article. Suffice to say its history is rich with visits from The Beatles, Led Zeppelin and Frank Zappa to locals like Cobain, Pearl Jam and Ray Charles.

Brother Ray moved to Seattle to get as far away as possible from his birthplace of Albany, GA, but he only stayed a couple years. Nonetheless, he cut his first record in Seattle, and developed his genre-breaking style here.