Steve Brusatte could be in the running for World’s Most Interesting Man. The 34-year-old paleontologist has become one of the most prolific dinosaur hunters of modern times, to date discovering and naming more than a dozen new species of vertebrate. (Well, technically they’re really old.)

He frequently travels all over the globe, living every boy’s dream as a real-life Indiana Jones. His new book, The Rise and Fall of the Dinosaurs: A New History of a Lost World is the ultimate dinosaur biography and will be the go-to guide for decades to come. We caught up with Steve, somewhere across the ocean, to find out more about the Earth’s first travelers.

You were born in the Midwest, and now live in Scotland. How’d you end up there?

I grew up in the middle of the cornfields and beanfields of northern Illinois, a state where no dinosaur bone has ever been found. But Chicago was about an hour and a half drive up the road, and seeing the dinosaurs at the Field Museum of Natural History was a big inspiration to me. I became so obsessed with dinosaurs that I decided to become a paleontologist, and moved to Chicago to study geology at the University of Chicago.

I did my PhD in New York, at Columbia University and the American Museum of Natural History, the world’s greatest dinosaur collection! Then my wife and I started looking for jobs on both sides of the Atlantic, and by luck one of the great European universities, the University of Edinburgh, started hiring hordes of young faculty and offered me a job, and here we are. Edinburgh is where the whole science of geology was invented, so that’s pretty cool.

Where is the best place for dinosaur digs?

I’m so fortunate to have this weird, niche job where I can travel the world digging up dinosaurs, working with amazing people everywhere from China to Brazil. Right now we’re doing a lot of work in Scotland, on an enchanting island off the west coast, in the frigid north Atlantic, called the Isle of Skye.

It’s a Tolkenesque landscape of craggy peaks, misty hills, and peat-clogged streams. It is also one of the few places in the world with rocks formed in the middle part of the Jurassic Period, about 170 million years ago, and they’re bursting with dinosaur bones and footprints. Ok, maybe not bursting. The bones are fairly rare, but the footprints are more common. I take my students there every year and we’ve found some cool things, including a site we call the ‘dinosaur disco’ because it preserves over 100 footprints of colossal long-necked dinosaurs milling about an ancient subtropical lagoon.

Isle of Skye, home of many dinosaur mysteries…***JakubSolovsky/Flickr***

It’s going to sound lame, but I have two ultimate dreams as a dinosaur hunter. The first is to find the world’s oldest bird on the Isle of Skye. It could happen! We know that birds were evolving from dinosaurs right around that time. The second is to find the first dinosaur in my home state of Illinois. A single bone, a tooth, a scrap of rib, part of a footprint: anything!

Brush with history: On a dig in Algarve, Portugal

Is there anywhere you haven’t been?

I’ve never been to Antarctica. But people are finding dinosaurs there, and several of my friends have gone on expeditions over the last few years. It’s really sad, but as the ice melts, more and more dinosaur bones will probably be found. It’s not the way I would prefer to find dinosaurs. But to find dinosaur bones on the edge of the world, deep in the glacial mountains, where the only way in and out is by helicopter. That’s the ultimate, I think.

That’s not to say I would relish going, though. Even growing up in the frigid Chicago area, I don’t know if I could handle months of Antarctic weather.

Where is the oddest place you’ve found evidence of dinosaurs?

Maybe in Scotland! But beyond that: Lithuania. It’s a small country, very flat, almost Illinois-like. Hardly any rock exposures anywhere. But about a decade ago I went there with my friend Richard Butler (a British paleontologist) and our Polish buddies Grzegorz Niedziwedzki and Piotr Szrek. We went into a huge quarry where they were mining clay to make bricks. Beyond all logic, Grzegorz found a tooth. And then returned later, and found more teeth and some bits of a jawbone. They were from a reptile that lived during the Triassic Period, about 230-220 million years ago or so. They weren’t actually dinosaur bones, but came from a very closely related species. Until then, nobody had ever found anything like this in Lithuania and we didn’t really think it was possible.

Best experience on a dig?

It’s something that I can’t talk about yet. Last year when we were on the Isle of Skye, one of the students on the trip, Amelia Penny, found a fantabulous fossil. I mean, stunning. By far the most important thing any of my field crews have ever found. We almost lost it to the tides, but we salvaged it at the last moment, and then celebrated like mad. But we’re still studying it right now and aren’t quite ready to announce it.

Worst experience on a dig?

The very first international dinosaur dig I ever went on. It was to Tibet. Still the most exotic place I’ve ever looked for dinosaurs. I was an undergraduate student, part of the team led by my mentor Paul Sereno in Chicago. Although the setting was gorgeous, and the rocks were looking good, fate just wasn’t with us on this trip. We were there for about three weeks, but had hardly any time to look for fossils because of bad weather, blocked roads, and other random acts of bad luck. That happens sometimes. You can go to the other side of the world and come back empty handed, because finding dinosaurs is not easy and so much is up to chance.

Fossil hunting in a clay quarry in Poland

How far did dinosaurs travel?

That’s a tough one. It’s hard to tell from fossils, but there is some evidence from the chemical composition of dinosaur teeth (go figure!) that some dinosaurs migrated long distances when the seasons changed, maybe even several hundred kilometers, or more.

What did dinosaurs do for fun?

When they weren’t hunting each other, causing small earthquakes as they thundered across the land, or dodging asteroids, I think dinosaurs probably would have behaved a lot like today’s birds and mammals. So they could have been a little bit playful with each other the same way, say, crows or otters are. It seems like a lot of dinosaurs lived in groups, so they were social animals.

Where weren’t there dinosaurs? Do we even know for sure?

They lived pretty much everywhere on land. Their bones are found on all of the continents. But they never invaded the water. They never did what whales did: start out on land, and then change their bodies so they could swim and live in the ocean. I have no idea why. 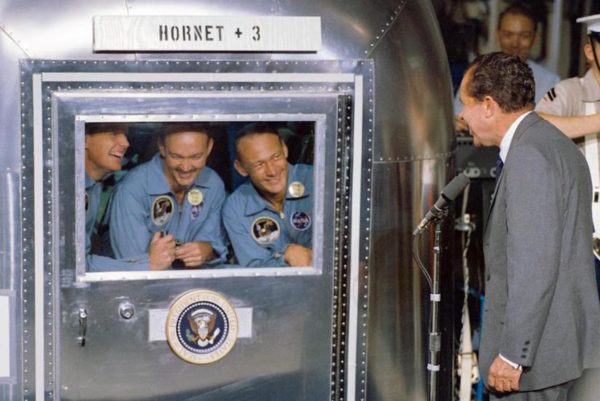 President Nixon welcomes the astronauts aboard the USS Hornet, back in the old days when returning astronauts crash landed into the ocean and were picked up. Temporarily confined to the Mobile Quarantine Facility are (l to r) Neil Armstrong, Michael Collins and Buzz***NASA***