If you’re a Gen X-er, there’s a good chance you grew up viewing Debbie Harry as an aspirational older sister, or maybe the cool girl in school you’d dream of being friends with. Kids have no sense of age, and Debbie’s striking, delicate, almost doll-like features left her ethereal, like a punk rock angel.

It’s possible some of us would have known her hits on the radio, danced feverishly to “Heart of Glass”, and surely no one escaped pre-teens not knowing every single word to “The Tide Is High”. Further, if you were born during a particular decade, your introduction may very well have been Debbie on The Muppet Show, singing “Rainbow Connection” with Kermit and a background of serenading amphibians.

For some of us, there’s no other way to experience a memoir of such a legend than to listen to her read it herself, as I did with Face It. Debbie Harry is not a professional reader, nor is she meant to be, but this is the only way to fully absorb the stark contrast of her remarkable life and her impenetrable rough vulnerability. Much of her story you might already know: Born in 1945; her adoption by a loving New Jersey couple; her struggle to make it in 1970s New York City; her brief foray as a Playboy Club waitress; her lifelong partnership—and 13-year life-partnership—with Blondie co-founder and guitarist Chris Stein; and, of course, the music. 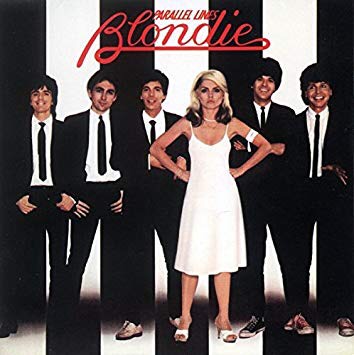 The surprises come from the frankness with which this self-declared forever punk describes herself and some of her tougher experiences. While living downtown, she and Chris Stein were driven into their apartment at knifepoint, where Debbie was tied up and raped, of which she says, Stein’s stolen guitars was the worst part.

When Blondie was on the rise, she’d brought David Bowie and Iggy Pop a small bit of cocaine at their request, and, as a thank you, Bowie unzipped his pants and revealed his notoriously (as we know now) large member. She reveals the story not with shock or horror, but with reverence, and posing the question of why Iggy didn’t do the same. Of how, in the early-80s, after selling 40 million records, Stein was struck with a devastating mysterious illness, they were destitute, losing their home, and being sued by the IRS after suffering grotesque mismanagement of their financial affairs. (To add serious insult to injury, the IRS succeeded in taking Stein’s health insurance away while he was in the hospital.) Before you wonder if you can take any more of this, Debbie continues to make music with little on-going commercial success, and her friend Andy Warhol suddenly dies in 1987, on the same day she split with Stein. 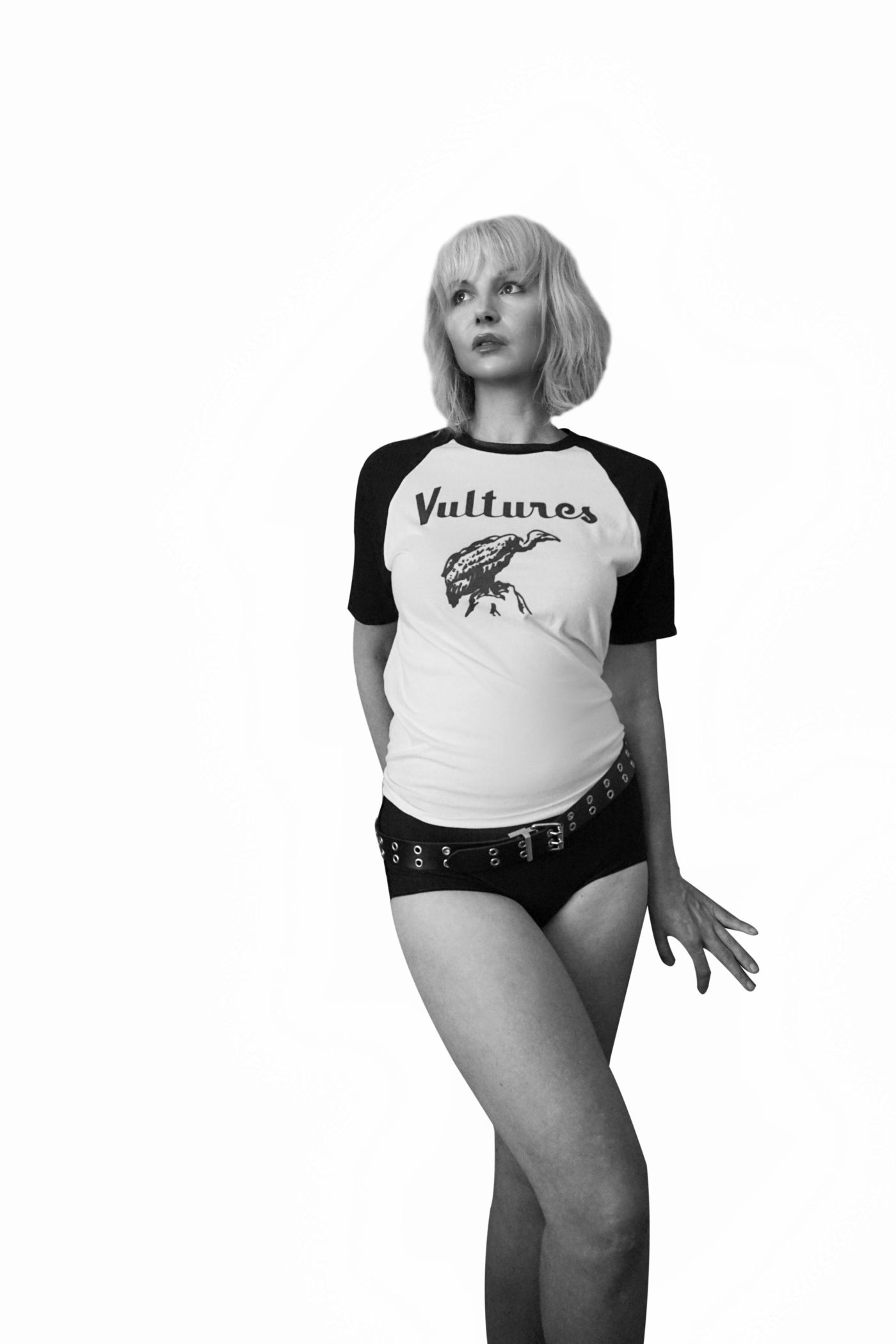 The author, in tribute to Harry and Stein’s famous shoot. (Vultures tee, grommet belt and blonde bob, her own.)

I dare to try and imitate such remarkable icons like Debbie in this column, in some scenes and styles, because I get to spend a fraction of a second playing — in this case Debbie Harry — dress-up. It was oddly shocking to realize that she wasn’t a Muppet Show fan when she appeared in 1981 at the age of 36. (And yes, that’s a real Kermit doll in my photo that my boyfriend saved from the trash during a hasty attic purge.)

I’m sure we all bounced around to “Call Me” during the show’s finale, not at all understanding it was the theme to a film about a guy who was paid for sex. I had a Vultures shirt and an apropos blonde bob already, so this shoot was easy enough, though we didn’t pull old baby dolls out of the trash to decorate the scene, as Debbie and Chris Stein had done in some of her most fantastically gritty, early-fame black and whites.

In reading Face It you snap back to the essential realization that Harry is so much more than her outer iconography. Even though I was that girl who hunted down the 45 single of “French Kissin’ (In the USA)”, obsessed over the cover art and Stephen Sprouse’s designs, as I was taking classes at Massachusetts College of Art. It would have been impossible, as a young teen, to understand the disappointment she must have felt when the single failed to break ground, and she was dropped by her record company.

With a cover design by Stephen Sprouse and Any Warhol, French Kissin’ reached 57 on the Billboard Charts in 1986

Harry recalls her favorite time, the early days of Blondie, when they were literally throwing together kick-ass awesome hits like “Atomic”, and the whole raw NYC downtown art scene. (Including a struggling Jean-Michel Basquiat’s $300 first sale.) Go ahead and Google “Debbie Harry Zebra Dress” and gawk at her gorgeousness, as you remark on Chris Stein’s striking portraits of Debbie in a tiny frock she’d transformed herself from a zebra-striped pillowcase she’d found in the garbage.

No matter how unfashionable it may be to say so, this may be my favorite look of hers to date, because of the story and raw authenticity behind it. It takes a true icon to rock a pillowcase.

The takeaway from Face It was, to me, surprising. I’d expected to be wowed and in shock and awe, but instead I wondered how those we idolize can ever suffer from disregard. It happens all the time, I know, but Face It reminded me that it happened to Debbie Harry, too. She’d raised us, in a way. She taught is how to sway into a camera, how to lead a punk band, and how to share the stage with a frog prince. She reminds us, without meaning to, that we need to revere our revolutionaries, if we claim to care about them. Her 1988 turn in John Waters’ Hairspray, one of my all-time favorite films, was a result of her quest to keep working and her chronic reinvention of herself as an artist.

Now in her mid-70s, she’s as bad-ass as ever. To those of us who saw her during her height, she’ll always be that tight-jeaned, heart-lipped, forever blonde girl gang leader. Now, she reminds us that the greatest fashion is reinvention and survival, something that looks good on everyone.

People Like Us, Ask a North Korean, Timekeepers, Julep 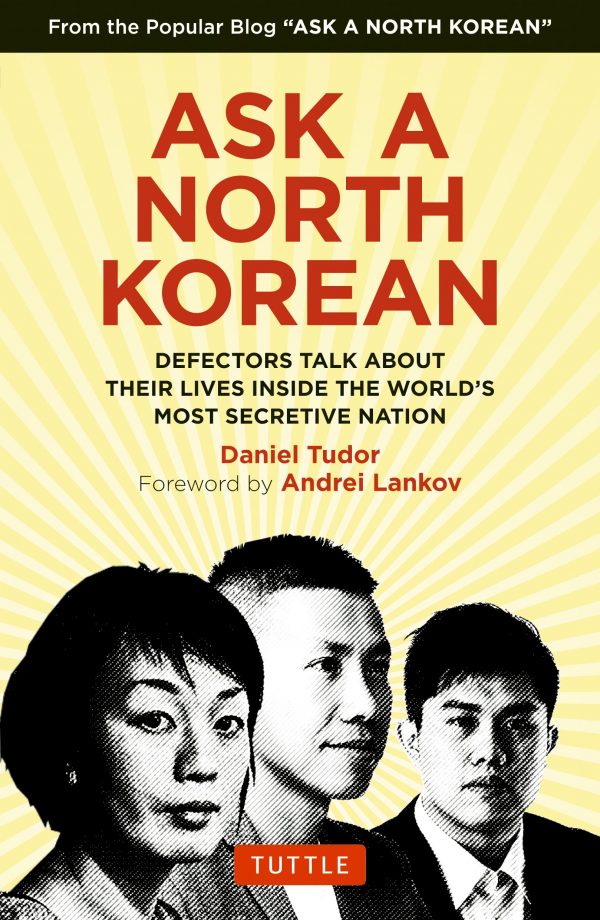