Notwithstanding tensions between Azerbaijan and Armenia, as ancient border disputes (and intervention by Turkey and Russia) have boiled over into military conflict, Azerbaijan still has so much that’s worth visiting for. The violence is isolated to the southwestern Nagobo-Karabakh region (don’t go there, if we may state the obvious). The nation, formerly part of the Soviet Union, is just beginning to open up, therefore much of what is beautiful about it remains untrodden by the tourist masses. That is, until we put it on this list! Sorry Azerbaijan!

In the east, on the Caspian Sea, is the capital Baku, surrounded by fortifications dating back to the 12th century, and steeped in influences from the countless civilizations and cultures that have come and gone, from Zoroastrian, to Persian, to Ottoman. It has been designated a World Heritage Site.

Make sure to visit Shirvanshah’s Palace for a dose of ancient Azerbaijani architecture. To the northwest begins the snow-peaked Caucasus Mountain range, an area of immense natural beauty with plenty of hiking, and dotted with ancient structures. This region is also home to the Lezgin, a people with a culture that dates as far back as the 4th century B.C. It is an incredibly rich culture centered around dance, religion and a delicious, distinct cuisine. In the cultural center of Qusar you’ll find your fill of decadent dolmas, and the wistful sounding afar, a dish of meat and herb filled bread.

When FOMO seems so yesterday, which it should by now, ahem, and you’ve tossed those conformist bucket lists out the window, there’s no better place to go than Juvet Landscape Hotel located in a remote village in the middle of nowhere on the northwest coast of Norway. Though the hotel bills itself as being in the middle of nowhere, as a fair warning, those in the know agree that “nowhere” is the new “NOWwhere”.

Juvet Landscape Hotel is extreme nature immersion with forest bathing, Nordic spa marvels, and outdoor activities that offer fjord viewing, skiing, climbing and hiking. Each of the “landscape” rooms is a small cube built on stilts with glass walls for those who’d rather do outside from inside. The prosaically named The Bath House is a glorious spa with a sweeping 50-foot glass sheet for ultimate river contemplation where you can watch the world go by. Or not. 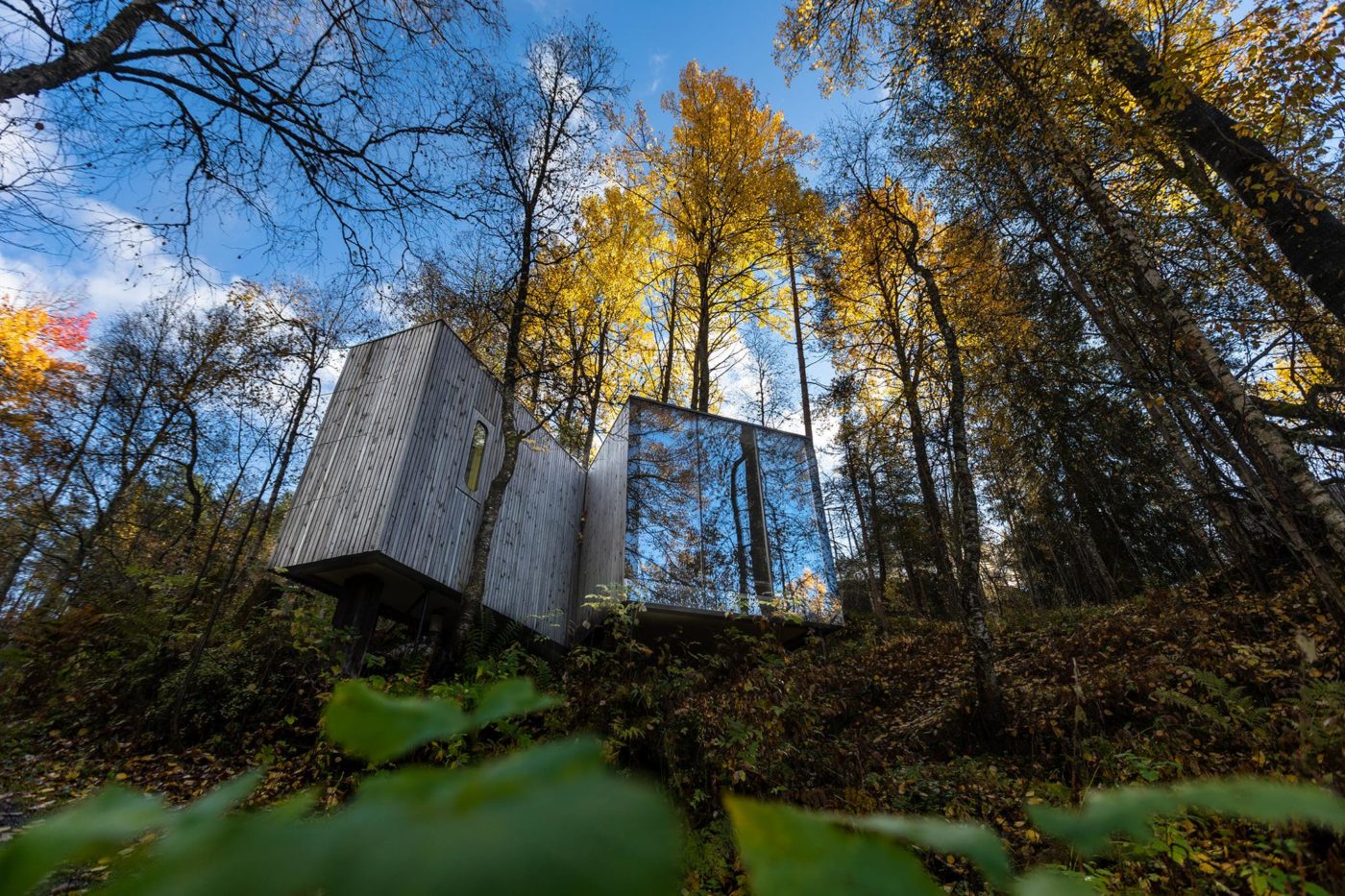 In 2017, Massimo Bottura, the superstar Italian chef who is twice winner of the World’s Best Restaurant list with nearby Osteria Francescana, and his American wife Lara Gilmore, exquisitely restored and adorned this 1700s villa in Modena, in the Emilia-Romagna region. The property is gorgeous, reached down a long windy driveway and through an imperious iron gate. The main building houses 12 guest rooms, each individually designed in that modern Italian hospitality speciality of blending the timeless traditional with the sleek and modern. The old brick carriage house, adjacent to an immaculate pond, is the restaurant, and Bottura is regularly in the kitchen with head chef Jessica Rosval. 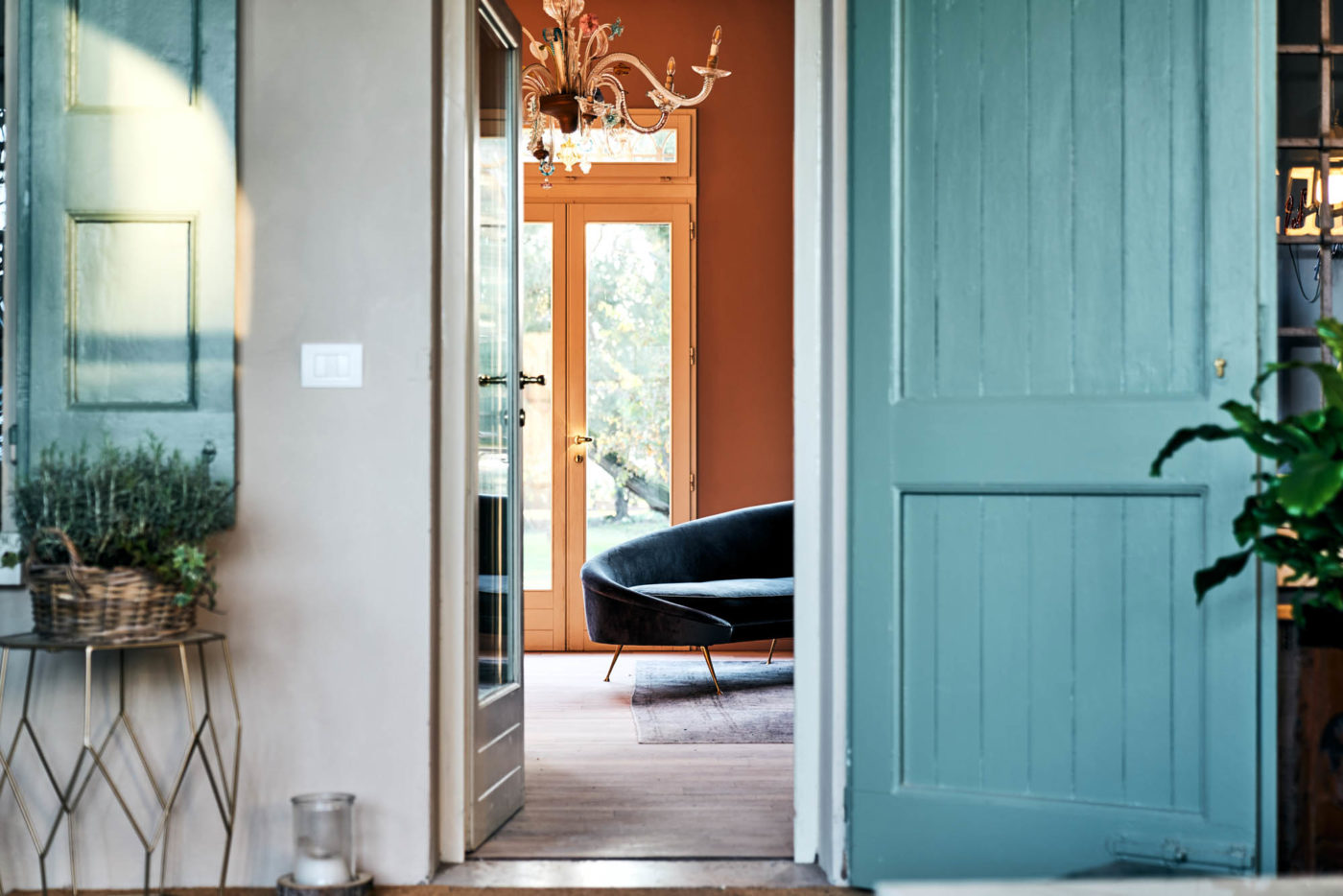 If only your house was this well furnished

The Inn is a labor of love for the couple, who poured their souls into the renovation and design. One of the rooms is a penthouse that has a living room, and a “tower room” (sooo fairy tale) as an additional bedroom. The main bedroom adjoins a wooden balcony that overlooks the spectacular, sprawling countryside. Time is your servant here. And when you have one of the world’s best and most innovative chefs in the kitchen, you have one of the most desirable destinations on the planet. 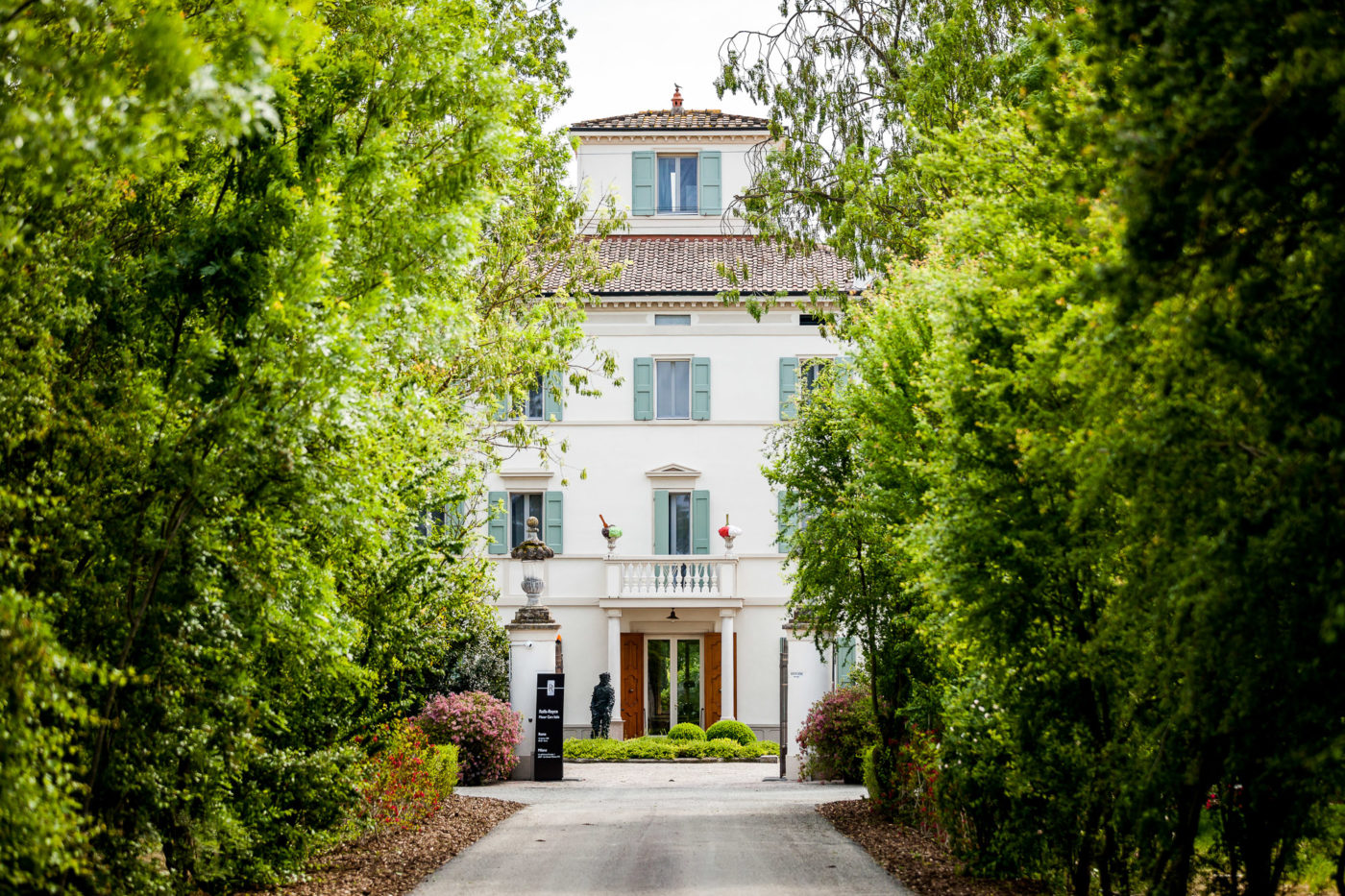 Talk about a dramatic entrance

Mountains, forests and hot springs, and castles and a 500-year old tea plantation: Gifu Prefecture is a large region of Japan both modern and old. One second you might be staring at a structure built hundreds of years ago and the next, you’re gratefully lapping up some 21st century air conditioning.

It’s unreasonable to describe all of Gifu as some sort of blast from the past — it all depends on where you go within Gifu and what you crave seeing.

For example, if you want a 13th century castle that’s been destroyed but reconstructed, check out Gifu Castle. If you’d care for a 13th century castle that hasn’t been remodeled and left to a few stone structures, check out the Iwamura Castle. We think Iwamura is way cooler; it really is a foregone ruin on a pretty hill in the smaller city of Ena.

Other experiences in Gifu include breathtaking tea plantations, kabuki, and traditional papermaking. You could go to hot springs if you want, but we recommend the ones in the Nagano Prefecture instead. There, you’ll also find ones reserved for monkeys. You will have your own separate onsen, but can visit some where our primate cousins enjoy their own chillaxing ritual.

In Gifu, the mountain villages of Shirakawa and Gokayama are UNESCO World Heritage sites. Known for their gassho-zukuri architecture, these towns are quite the sight. 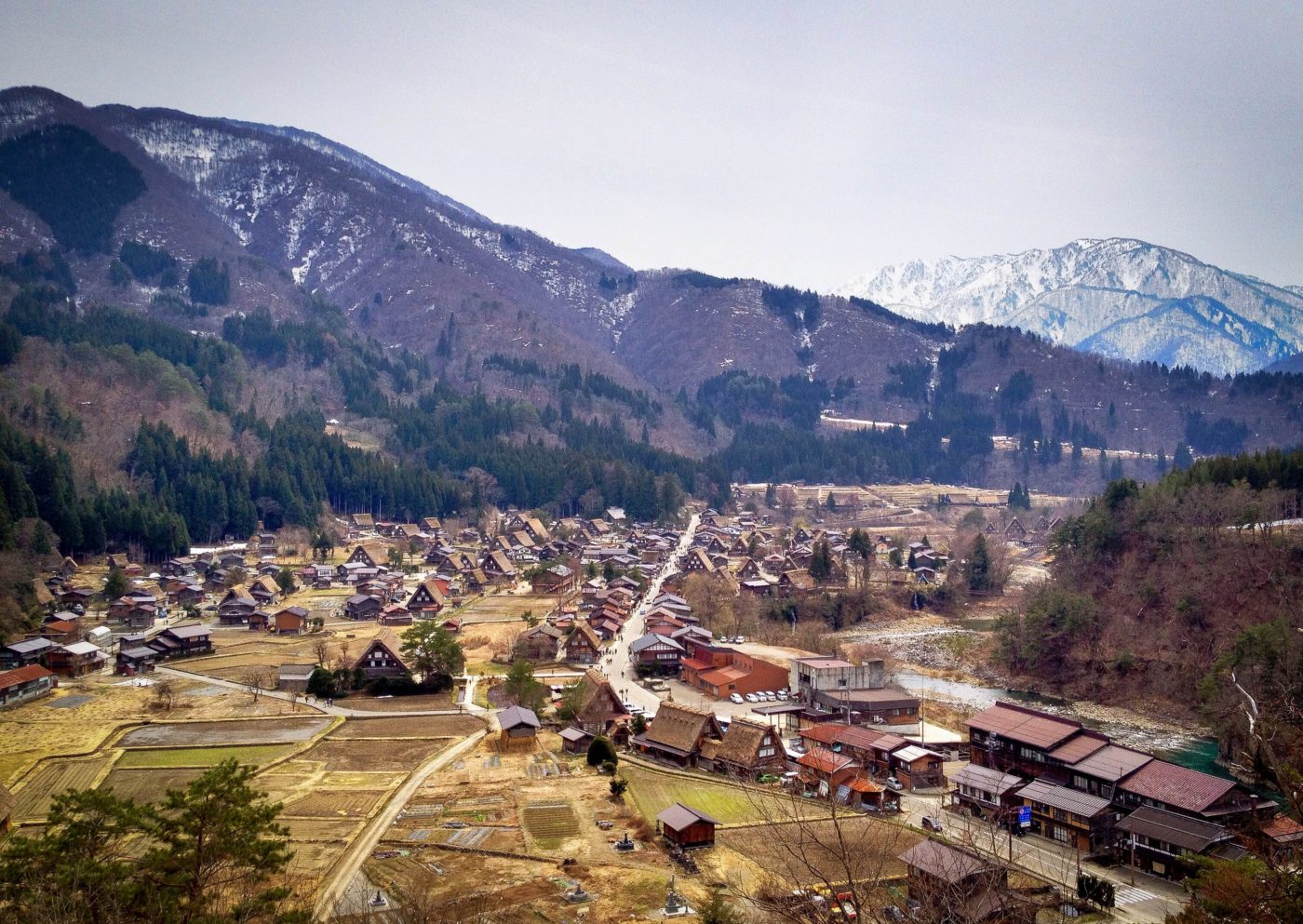 Gifu Prefecture seamlessly weaves together the old and the new

Once one of the countries least interested in tourism (see item 13 from last year’s 100) the Faroe Islands have now become one of world’s most sophisticated self-promoters. Situated high in the North Atlantic between Iceland and Scandinavia and just a few degrees outside the Arctic Circle, the Faroes are savagely beautiful and warmly hospitable, now famously so. This is, after all, the country that gave us the sheep cam. Hall of Fame Tourism Board for that alone.

Another gimmick was they once closed the country down to visitors — long before the pandemic did that for most nations — for maintenance! Now they have a new glorious piece of whimsy to attract tourists: the surreal, giant, blue-lit sculpture of a jellyfish at the roundabout at the end of a six-mile-long undersea tunnel connecting Streymoy and Eysturoy, the two most populated islands.

The tunnel halves the driving time (and completely circumvents travel difficulty due to the weather) between the islands and will help expand tourism to the lesser visited north from the capital Tórshavn. (Another tunnel is being planned to connect Eysturoy to the southern island of Sandoy.) The roundabout structure, resembling an illuminated jellyfish, is natural rock intact after the tunnel blasting and covered in a steel, 262-foot circumference sculpture by Faroese artist Tróndur Patursson, of dancing people forming a ring that looks inward to the blue light. It is also partial support of the ceiling at the widest point of the tunnel. Calling his artwork indicative of the Faroese traditional “Ring Dance,” Patursson said in an interview: “The figures symbolize the very Faroese idea that by joining hands and working together we achieve great things.” They already have. 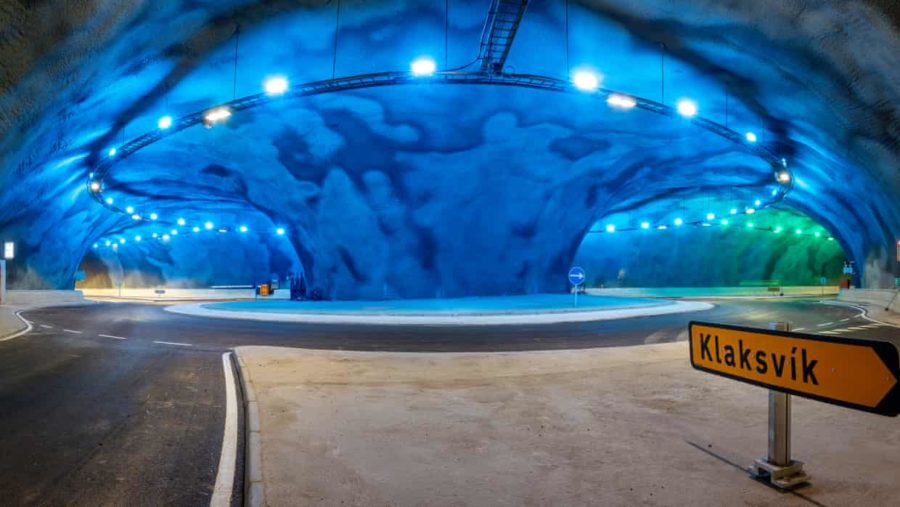