Voted as one of the 16 best beach bars in the world — I know, an odd number, right? I mean, if you came 17th you feel really luck-less — the bar with a panoramic ocean view can be found at The Rock Restaurant. Literally a restaurant on its own dedicated rock in the Indian Ocean, it’s the ultimate getaway, if ever there was one.

Depending on the tide, one can wade over or take a short five-minute boat hop from shore. The menu is locally sourced and seafood based, and offers a fine variety of options from tender octopus salad to homemade eggplant ravioli. And of course the bar is in that heady, almost incalculable percentile of world bars… The Rock is geared toward special events, although just going there is a pretty special event, and contributes to the community as part of the Kichanga Foundation, which supports local villages.

Slovenia, once part of Yugoslavia, has largely gone under the radar, but its wine and cuisine, caves and farm stays and cycling trails are reasons to go. It’s at the heart of Europe, bordered by Italy, Austria, Croatia and Hungary, and one of the safest and cleanest countries in the world. There are hundreds of castles in differing styles from Gothic to Baroque, one of the most beautiful lakes, Lake Bled, and some of the most unspoiled nature in Europe. Sixty percent of the country is forest, and there are numerous festivals to (hopefully, fingers crossed) look out for in the summer.

Did we mention caves? There are a staggering 10,000 in Slovenia — Postojna is the largest cave in Europe and was only discovered in 1818. It’s almost 13-mile length goes through large limestone caverns full of stalagmites and stalactites. Stunning surreal cathedral-like rooms connected via halls and passageways. It’s a natural art gallery formed over 2 million years ago.

Visitors can travel through three and a half miles of the cave system on a small train and then walk along raised platforms through the stalactites.

Slovenian vineyards — had you ever heard of Slovenian wine? Neither had we, maybe it’s a secret, but vineyards are plentiful. Five percent of the population of Slovenia are beekeepers, so there’s plenty of wine and Slovenian honey. Stay in the capital city of Ljubljana. It’s a chocolate-box-pretty old town along the river whose name in Slovenian means ‘the beloved,’ and is also known as the City of Love. 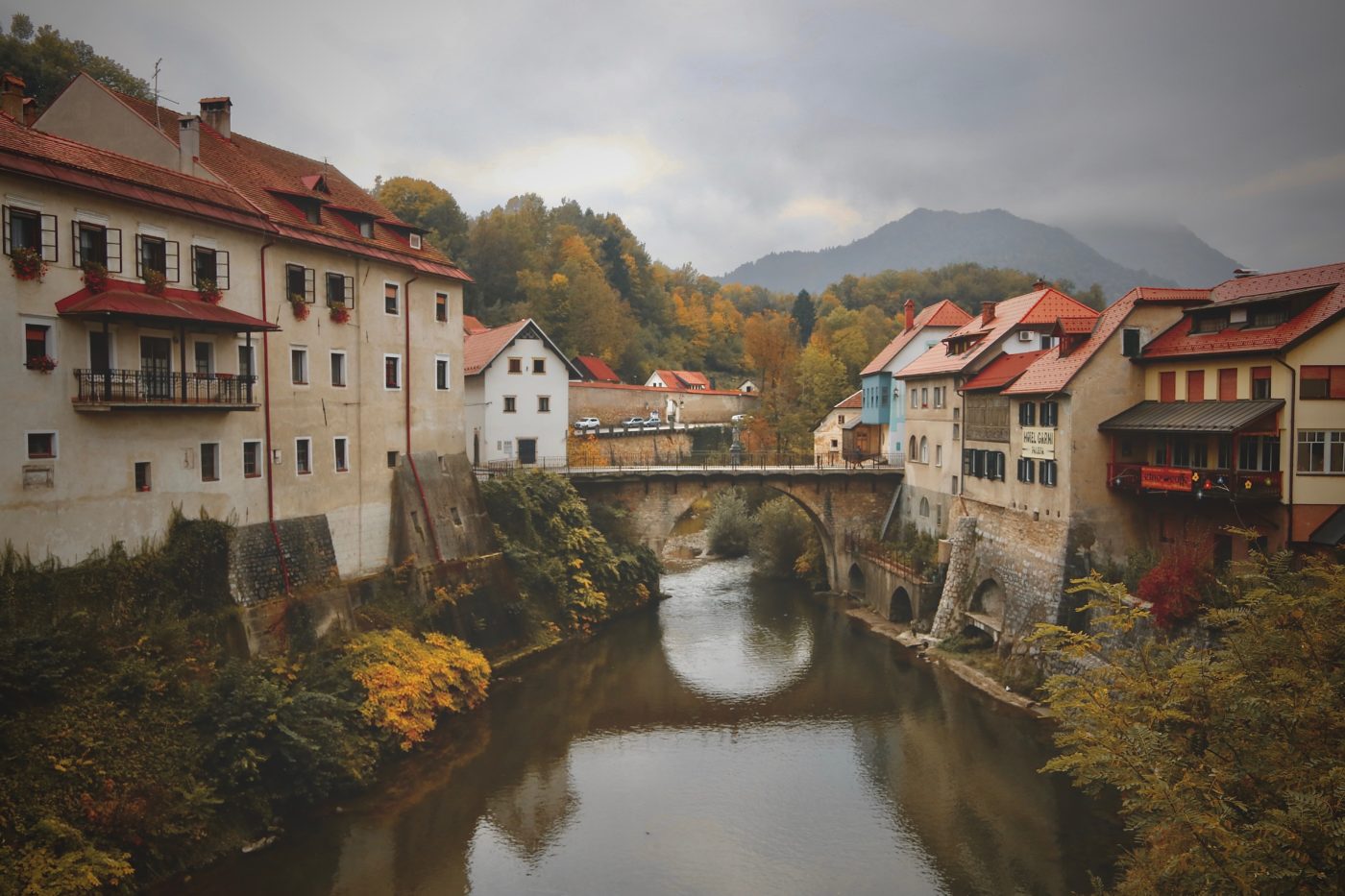 Did we take a time machine back to the Middle Ages?

You KNOW you want to go here! This is the ultimate paradise. Forget all the villas over the water in the Maldives, maybe we’ll all be living in villas over the water at some point anyway. But this place. This place caps it all, and you’ve probably never heard of it. Fregate Island Private is in the Indian Ocean a thousand miles east of Kenya, and one of the 115 islands of the Seychelles. Most of the island is covered in lush green rainforest with the most beautiful white sand beaches dotted around and fringed by coral reefs.

The whole island can host up to 44 adults and 15 children. You can be married where the white fairy terns flit through the forest with their partners for life (a good omen, FYI), or on the someone declared “Most Beautiful Beach in the World,” Anse Victorin, or in the Creole-style chapel on a hidden hilltop. The island managers will arrange all formalities for you including entertainment and flying in every special request.

Alternatively, if you don’t want to rent the whole island, you can stay in one of their 16 Pool Villas secluded by the rainforest canopy with your own infinity pool looking out over the Indian Ocean. Plus, you get your own buggy and private butler to serve your every (reasonable) desire. And the nighttime safaris are fun! 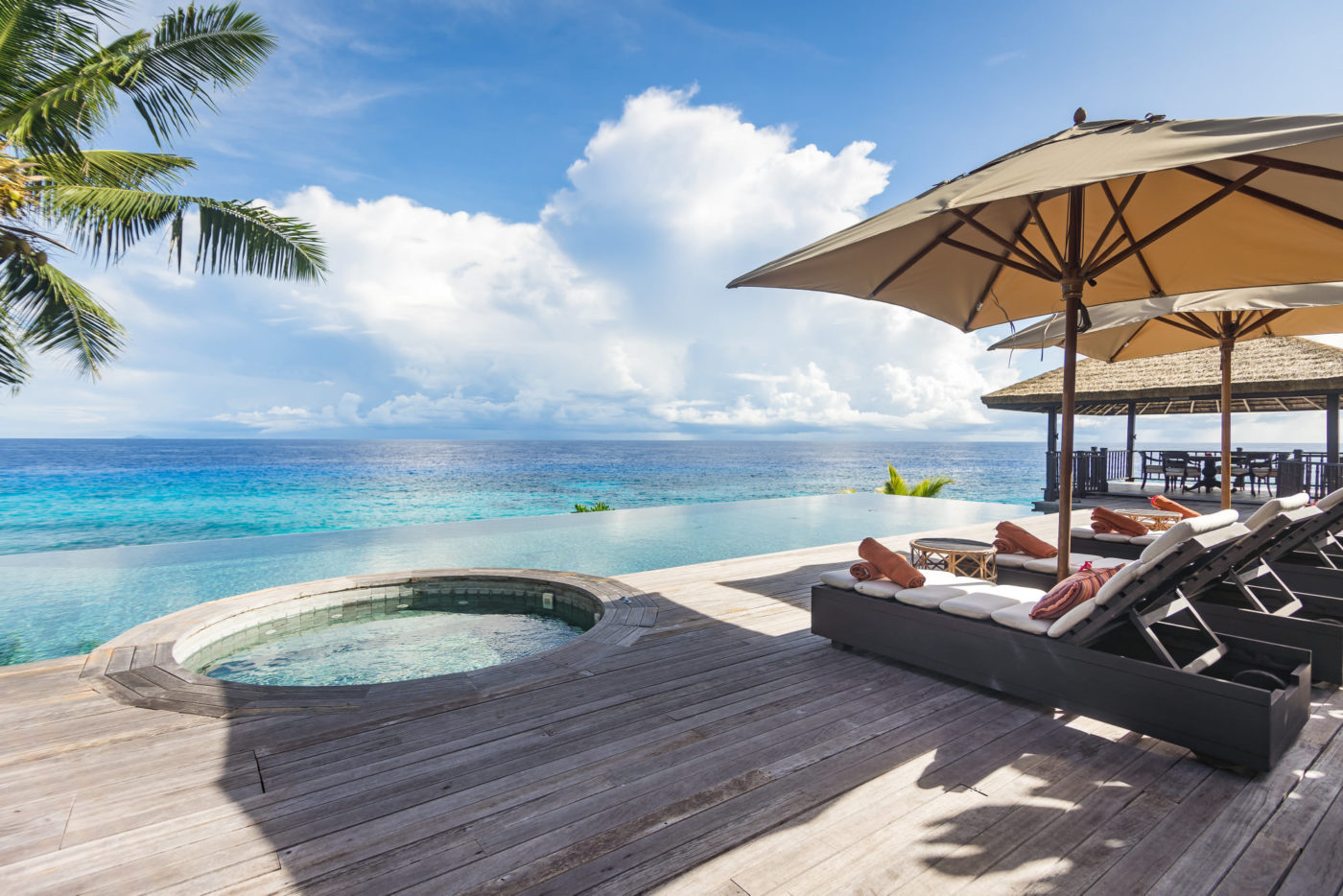 The villas sleep from two to six adults and three children. We’re not quite sure about the math for rationing children on this island, but I’m sure the numbers are negotiable.

For activities there are almost seven miles of trails, a dive club, sports boats, and lying still, by the way, our default activity here at WONDERLUST Tower. The Rock Spa uses botanicals and fruits from the island, rubbed all over you, and the snorkeling is like being dropped into an aquarium.

Eighty percent of the ingredients used by the chefs are from their own gardens including papaya, star fruit, pumpkin leaf, coriander, coffee beans, zucchini and spices, together with an abundance of local catch, and fresh ginger and lemon basil zesting up your cocktails. They have a fine wine cellar, too.

Should you get the golf itch whilst on Fregate Island Private (we have witnessed committed golfers in action!), a private helicopter will fly you to play at the 18-hole golf course on the nearby island of Praslin. And back, of course.

The best times to visit the Seychelles are April, May, October and November.

Fly into Seychelles International Airport on the island of Mahé, and then take a helicopter or boat from Mahé Island to arrive. 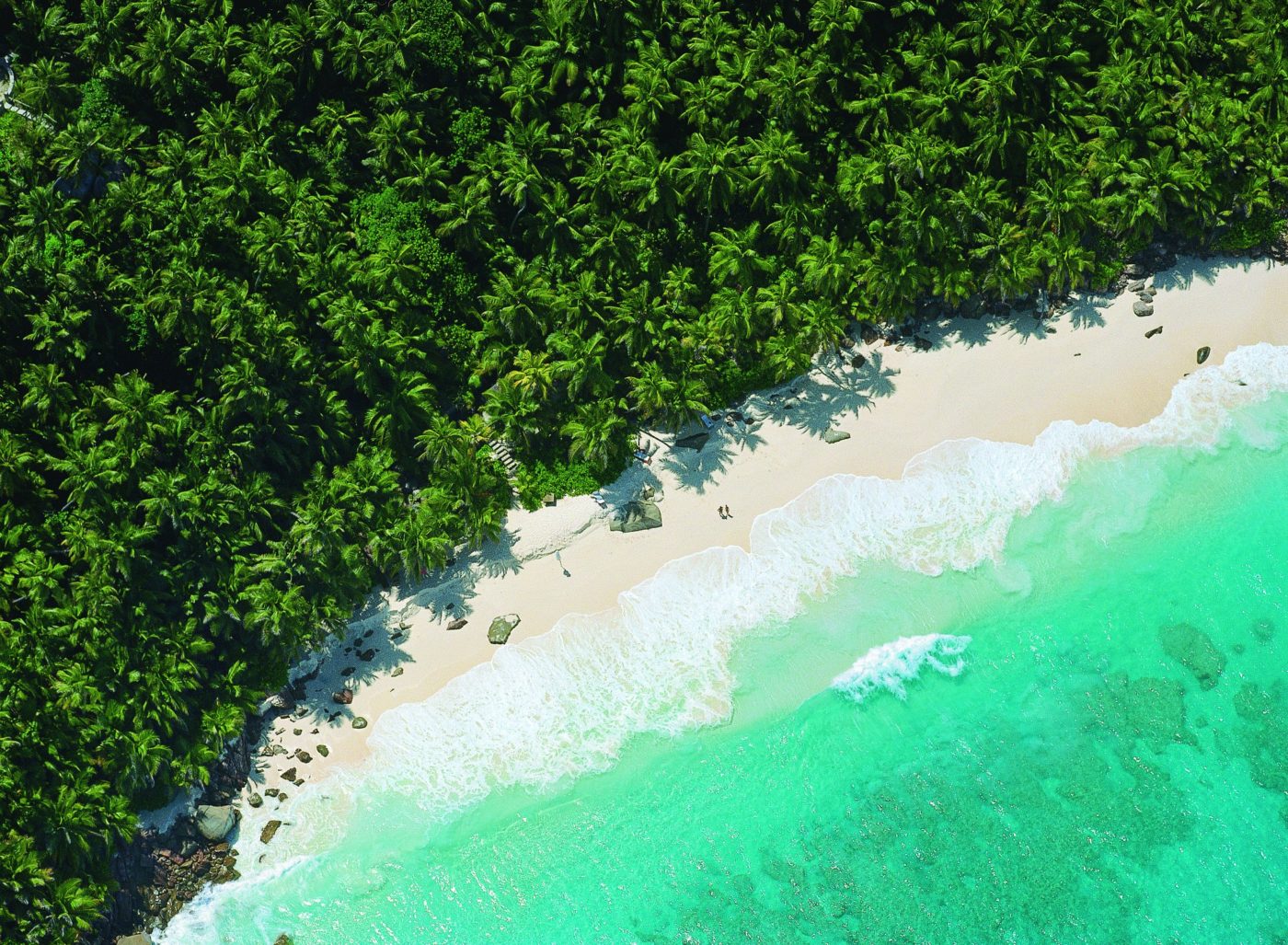 What comes to mind when you hear the phrase “The Poconos”? For many, it’s the images of much-disparaged heart-shaped Jacuzzis and champagne glass hot tubs, which is what gave this region in northeastern Pennsylvania the moniker “Honeymoon Capital of the World” in the 1960s. For the next 30 years, it was the place for couples to go to, um, renew their relationships. Then the honeymoon was over. Most of those love nests shuttered and the area fell into disrepair. But somewhere along the line since, people realized there’s so much more to this area than love by the hour. And what an area it is!

The Poconos is 2,400 square miles! That’s bigger than Rhode Island and as big as Delaware. Nowadays, the Poconos has become one of the true year-round destinations, attracting more families and outdoor enthusiasts, and being just 90 minutes and two hours from New York and Philadelphia, respectively, it attracts those people as well. And after 9/11, and most recently the pandemic and lockdowns, there were migrations of people moving to the region (which also includes Milford) permanently.

There are 170 miles of rivers to enjoy fishing, boating, whitewater rafting in spring and summer. The fall is gorgeous for hiking, and for god’s sake, how can we forget the foliage. There are so many mountains for your winter sports, from Camelback and Jack Frost to Shawnee and Blue Mountain, with trails for all ski levels. The Poconos also became known for its indoor water parks, boasting three massive ones – Great Wolf Lodge is the most notable.

There’s NASCAR for racing fans; Mount Airy Casino and its 1,800 slots, 170 table games and a sports book for you gamblers; Barley Creek Brewing Company and their distillery for you righteous booze seekers; there are 600 acres of wildlife and nature trails at the Dorflinger Suydam Wildlife Sanctuary. State parks abound! (Milford is the birthplace of the modern conservation movement, FYI.)

For you folks who love food, there’s the elegant Moya in historic Jim Thorpe. Ecuadorian chef and owner Heriberto Yunda will entice you with a global menu including Smoked Trout salad with Arugula, Sun Dried Tomatoes with a Horseradish Cream Drizzle, and Honey Glazed Shrimp with a tomatillo sauce. If this is what you want, you better go now because Yunda changes the menu frequently based on the seasons. His wine and beer list is also impressive, being very mucho international. And there are other outstanding restaurants around the area.

Whether you spend the night, the weekend, a week or longer — and you’re still looking for a romantic getaway — book any of the 19 rooms at the luxurious The French Manor bed and breakfast — and spa, and saltwater pool, and yoga, and…well we think you get it. This place, this region, this is it! 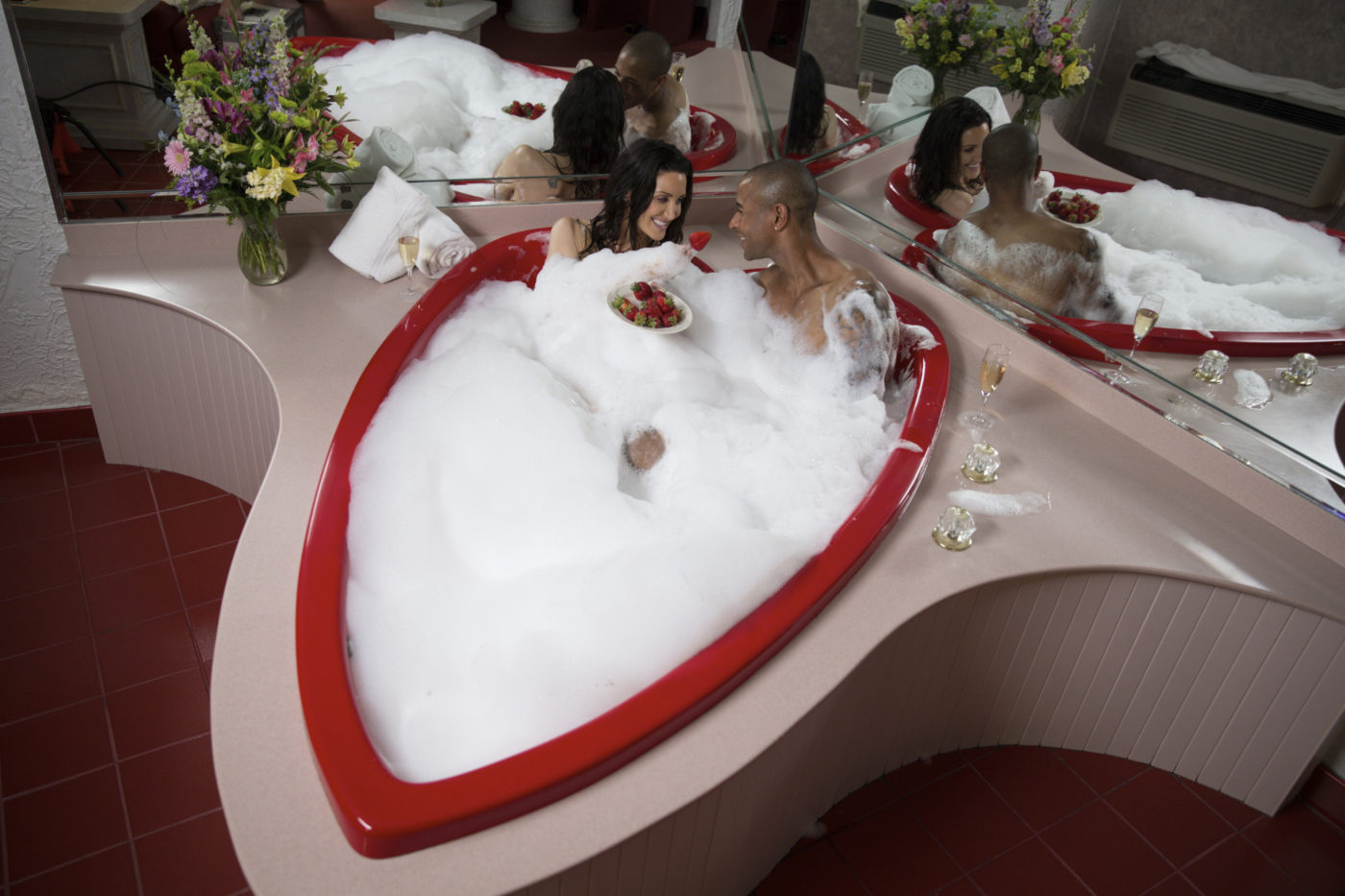 Romance is not dead! Yep, this is where the heart-shaped tubs started and they are still here

Snowman Trek in the Himalayas

The Himalayas are probably the most dramatic and beautiful grouping of mountains on Earth, and connect some of the most magnificent and special and pristine countries: Bhutan, Nepal, Tibet and the northernmost tip of India. This trek in Bhutan is one of the more challenging — some say the most — but it’s also one of the most exhilarating and inspiring trips you could ever take. Starting in Paro, from where you are driven to Shana, at an elevation of 9,400 feet, to commence the trek to Lunana, it is a 27-day commitment. The trek itself is 23 days (including three rest days), with camping in tents and eating Bhutanese food cooked fresh each day. You will traverse on average about seven miles a day, but across 11 passes over 14,700 feet above sea level. This is not for the casual stroller. This is for very fit and adventurous people.

But what an immersion! Three weeks in the purest, snow-capped mountains on the planet, seemingly a million miles and a thousand years from anything we recognize as daily life. You’ll come across breathtaking glacial lakes and spend time in tiny villages and yak herder encampments. You’ll see utterly isolated Buddhist monasteries dotting the mountains. It is safe to say, especially given the physical demands of such a trek, that you would never experience anything quite like it again.

The company to call is World Expeditions — this is what they do. 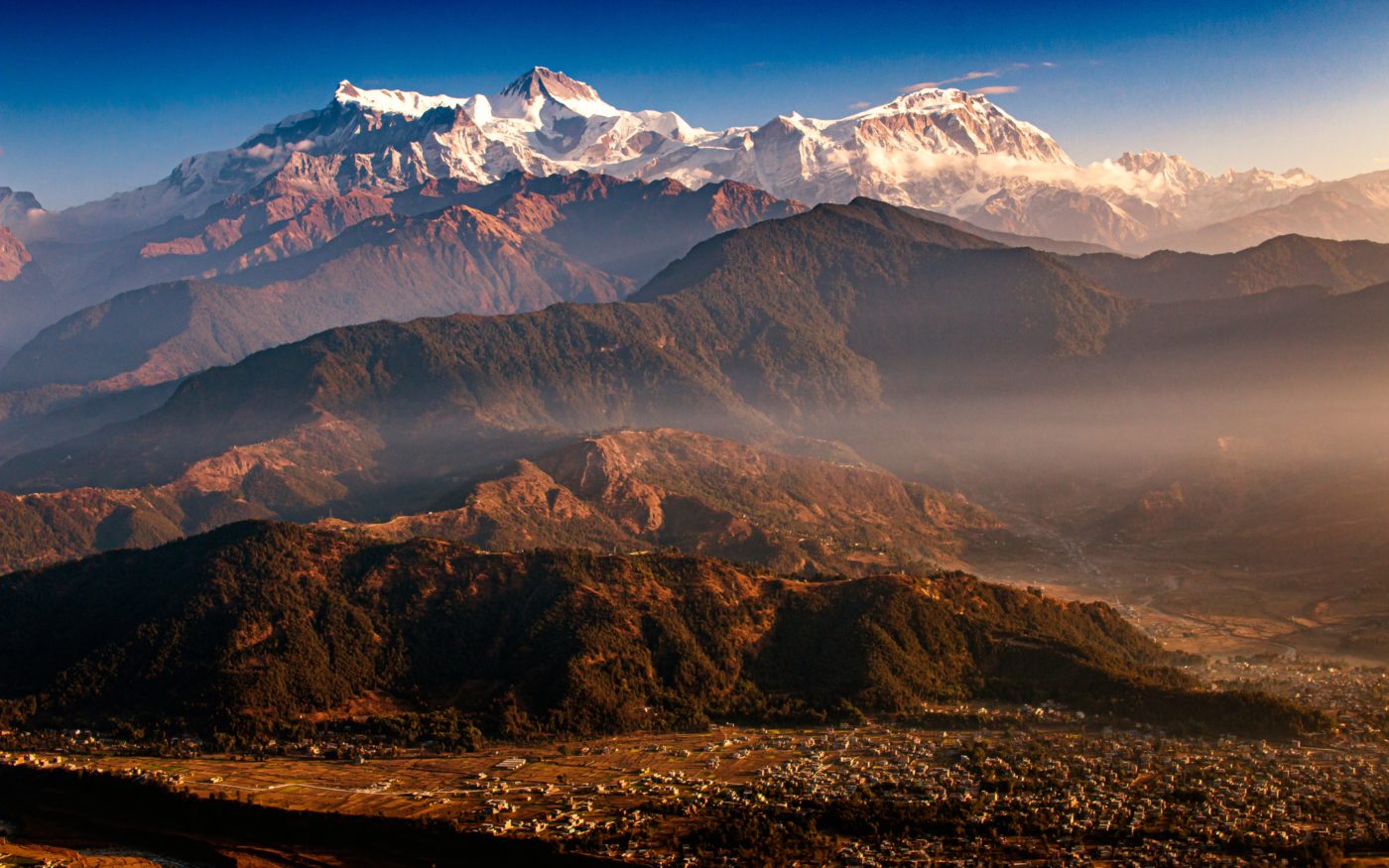 Imagine 23 days with this view