By the rude bridge that arched the flood

Their flags to April’s breeze unfurled

Here once the embattled farmers stood

And fired the shot heard round the world

It’s a scene that plays itself out every year. The Redcoats have mustered on the lawn of the Old Manse, a stone’s throw from the North Bridge in Concord, Massachusetts. It is seven o’clock in the morning. In the slanting sunlight their scarlet uniforms, swords and muskets and brass buckles radiate confidence. A clipped arrogance of manner is affected – “Cheerio! Right you are, sir!” – by these well-clad reenactors from nearly every state in New England. After all, when British troops under General Gage marched to Concord searching for hidden colonial arms and ammunition on April 19, 1775, they did not expect to meet organized resistance. To most of their officers, the American militia was a “peasant rabble” to be brushed aside.

“Leftenant Colonel,” as he calls himself, Winston Stone, British brigade commander of His Majesty’s Foot Guards, stays in contact by cellular phone (which, honestly, they didn’t have back in 1775) with Gardner (Skip) Hayward, head of the colonial militia. They hate to concede the use of modern gadgets, but concern for safety makes close communication a necessity. Several hundred yards away the Minutemen are taking up positions on the hill across the Concord River, where citizen soldiers of Concord and nearby Acton rallied to face the British.

Compared to the Minutemen, the smartly attired Redcoats are the fashionistas of this Patriots Day reenactment. Stone has a succinct explanation – “Haberdashery, old chap.”– as to why he joined the King’s army instead of his native colonials. (“And we have better parties,” confides an ersatz Redcoat foot guard.) These reenactors seem to have been recruited for their Anglo-Saxon bone structure, pink complexions and long noses, though Stone points to some French and Italian descendants in his unit.

Today’s Redcoats reprise the original light infantry and grenadiers in General Gage’s expeditionary force of 1775. The light infantry were small and hardy, fast runners who could race ahead to seize and hold bridges; the grenadiers (originally grenade-hurlers) were big fellows in fur hats who could break through enemy ranks in a bayonet charge. “We were recruited for our intelligence and our good behavior!” protests one of the grenadiers as he waits for his marching orders. “We’re better men, not bigger men.” 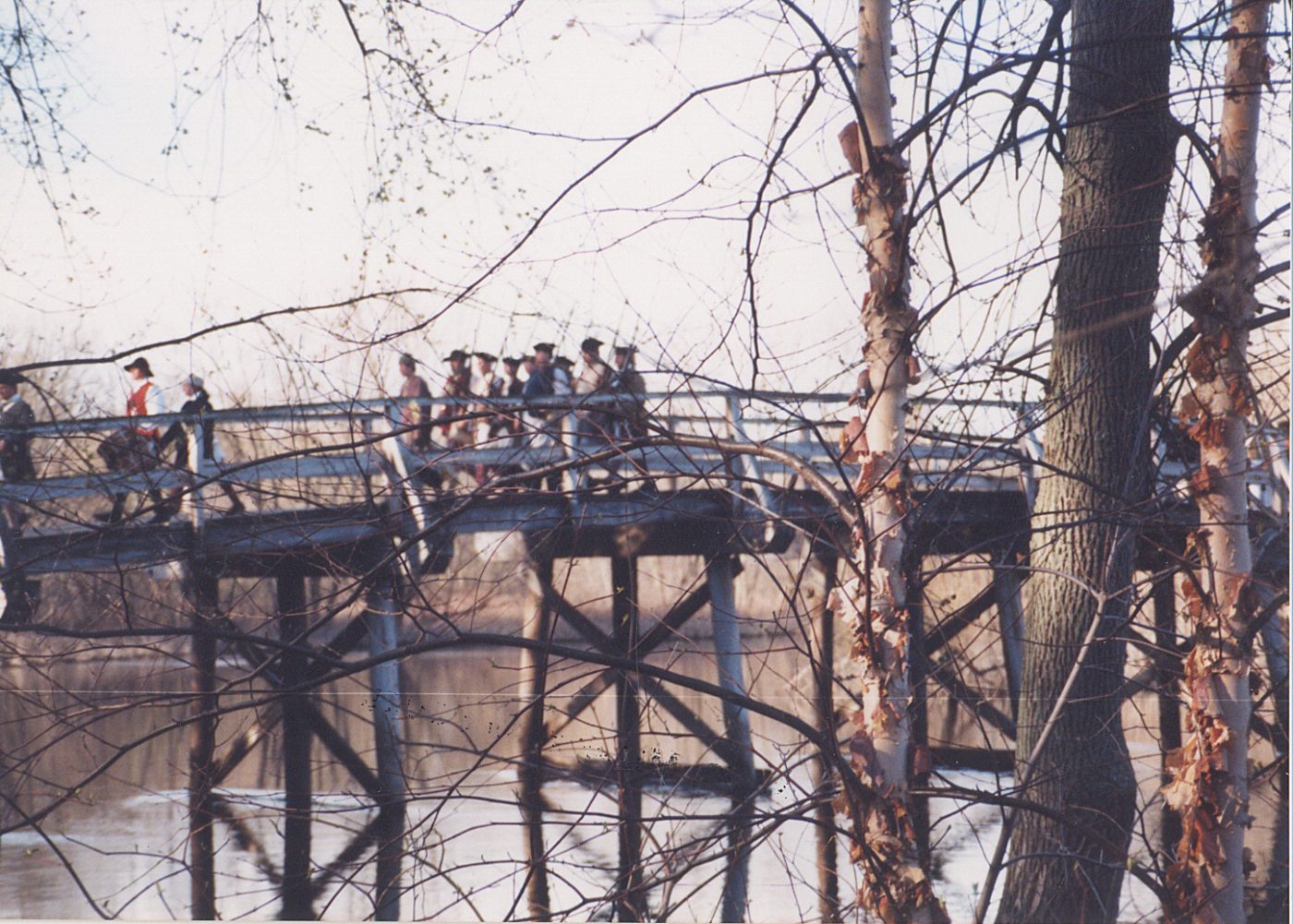 These living history reenactment units from Massachusetts, and as far away as Canada and Michigan, have gathered their kit, powdered their wigs, cleaned muskets and uniforms, rolled black powder cartridges and stacked arms on the green, all eager to face the Minutemen.

Colonial “loyalists” march alongside them in a show of support. “We’re loyal subjects of His Majesty,” one of the costumed civilians explains, using the present tense quite naturally as if the Concord fight is occurring now, for the first time, and will be fun! “We are very disturbed at what’s happening and have come to pitch in.”

Skip Hayward, President of the Lexington Historical Society, is chief organizer and choreographer of the Patriot’s Day reenactments. “The Battle Road retreat was one of the most unique battles ever fought,” he explains. “It was 16 miles long and 200 yards wide, a running battle from Concord back to Boston. We present a variety of tactics used in 1775; some of those tactics were ambushes from behind rocks and trees, or in other cases, they used military formations.”

Hayward has to be everywhere at once, checking rosters, sending runners with orders to move a company here or there, greeting friends and compatriots — after all, this is old home week for Independence buffs. He wears a long gray coat and tri-corner hat, is armed with a sword and walks with the long strides reminiscent of the colonials. He seems as comfortable in the 18th century as in the present. Maybe more.

“These people stood out here and defied the police force of the day,” he says with feeling. “Citizens were being mistreated. And they fought back.”

A proud descendant of a Revolutionary veteran, Charles Anthony, of Durham, Maine, is dressed in a bright green frock coat and white knee breeches. He is representing his great-great-great grandfather, Edmund Phinney, a founder of the town of Gorham, Maine. Like all the “colonials” present today, Anthony can reel off historical facts. His beaver cocked hat and powdered wig, for example, are those of a man of wealth. Dark wigs indicated less influential social status. Anthony’s shoes are the “latest fashion” of 1775 — toes pointed, not square.

An airliner flies over, its jet trail slicing through the cobalt sky, and Anthony shakes his fist at it, shouting “Keep the 21st century out of my war!” 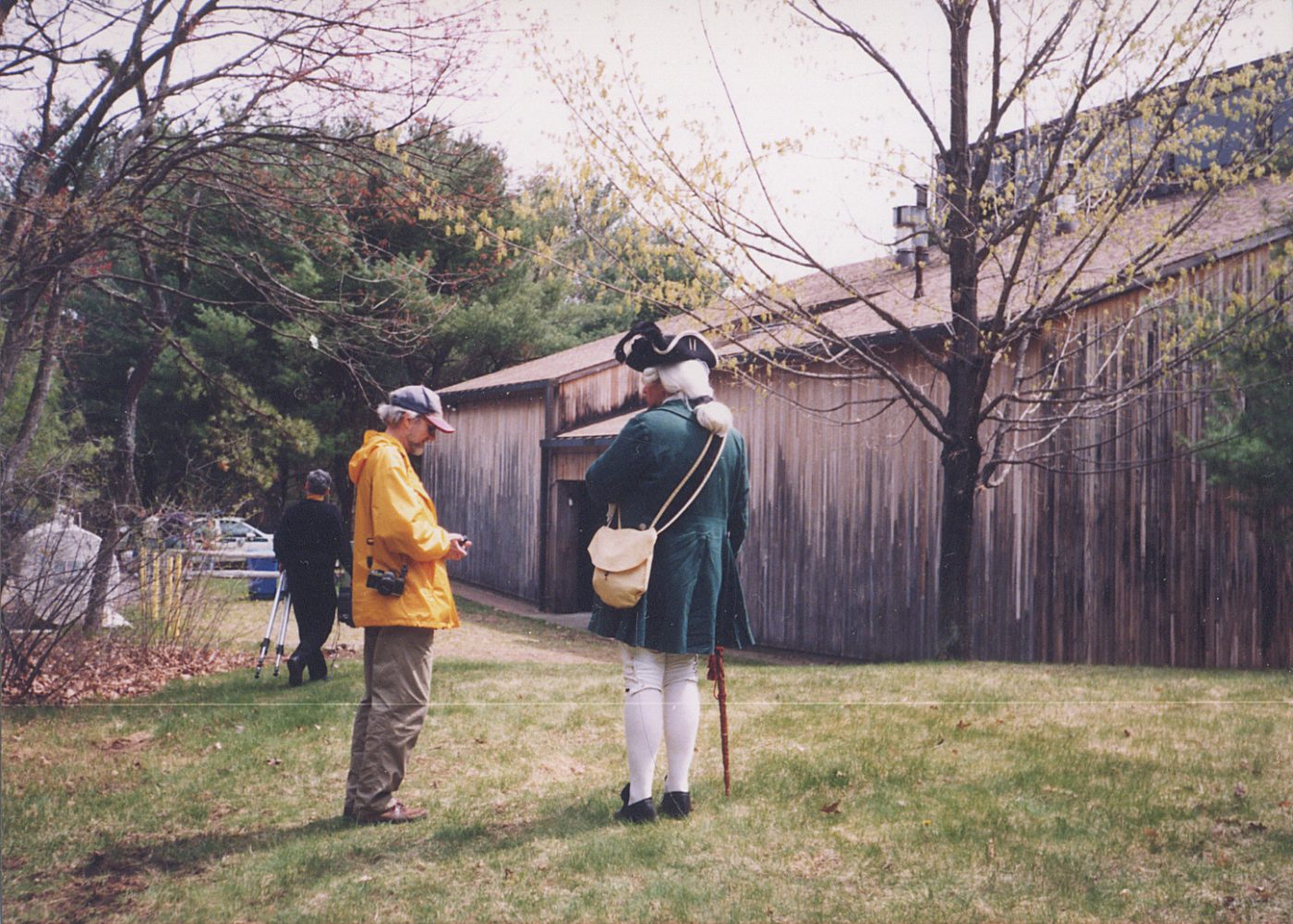 Fifes and drums draw spectators towards the fabled bridge. The militia, colonial dames and their children blend into the landscape, their costumes representing the “sad colours of Boston” — brown and grey and green — in perfect contrast with the Redcoats. Standing expectantly behind stone walls are visitors from Japan, Germany and France. A little Asian girl wears a cardboard tri-corner hat.

Stone’s order to move out is echoed down the line by subordinates. The Redcoats march massively, ominously, to the bridge, trailing muskets. Awaiting them on the hillside are the Minutemen.

“Basically it’s a rear guard action,” Stone describes the British strategy. “We’re trying to keep the column moving, as well as take care of the snipers who were shooting at us. It did not look the way it does today; there were no trees here. It was all farmland. The Minutemen knew that if they stood out in the open they’d be dead. Mostly they did not have bayonets. If they tried to stand and fight, they would be at a disadvantage. Many of them had fought in the French and Indian War, and they were trained in linear tactics.” He adds, with characteristic esprit de corps: “Even so, if they stood in line against the British army they would die. So they hit and moved on. Other militia groups did the same all the way to Boston.”

In real life, Stone is a Ford Motor Company warranty administrator. Today, dapper in tailored officer’s coat, he and his Redcoats are outnumbered five to one by the colonials just as in 1775. “We have seventy effectives,” he tells me during a pause in the action, “including eleven officers and twenty non-commissioned officers.”

The spectators roundly boo as the Brits come on. Stone gamely shrugs it off, saying, “If they boo and hiss, that means we’ve done our jobs right.”

The Minutemen, with history on their side, are confident of victory, are eager to renew the conflict. And let’s face it, it is kind of a sure thing. Most wear tri-corner hats; some have tassled red wool caps with “Liberty” printed on them. Fat, skinny, tall and short, mustachioed or clean-shaven, they personify America’s first citizen soldiers, who dropped what they were doing and took up arms against a professional army.

Between today’s armies, the Concord River flows serenely, powerfully, its dark current forging a “V” (for victory?) on the North Bridge pilings. The British start across it, the tramp of heavy boots on the wooden bridge startling in the silence.

The Minutemen deploy, company by company, moving down the hill in sunlit tandem to the “tamp, tamp, tamp” of snare drums. That day in 1775 the British were unnerved by the precision marching of the “peasant rabble.” The Redcoats actually were green, untried troops who had been marching all day in wet clothes and with limited ammunition. Still they were the Regulars, undefeated on American soil.

Quiet descends on the battlefield. Hayward speaks in a whisper, reverent, respecting the silence: “When you’re standing on the hill, waiting for the Redcoats, you don’t see the crowd. You go right back in time. You get goosebumps. You get nervous. You see the British column coming just like they did in 1775; you hear the drums, you hear the fifes, you see the glitter of bayonets and muskets; and just when they walk onto the bridge, at that point it grips you, that this is similar to the way it really was.”

Redcoat officers can be heard calling their men to attention, shouting down the line, “Present arms!”

The first volley is fired, a sudden ripping roar, shattering the silence, causing birds to fly out of trees. The Regulars fire in turn, each rank stepping back and recharging their weapons, a carefully practiced and rehearsed maneuver.

Hayward orders the Minutemen to return fire in the spirit of the original owner of the farm on the hill, Captain Buttrick, who was heard to shout, “Fire, men. Fire, for goodness sake.”

A deafening roar comes from Minutemen muskets, their massed fire breaking the British line. Seeing the Redcoats beginning to fall back, the Minutemen raise a cheer, growing in intensity; the spectators join in, victory being contagious, until everyone is roaring with it, full of the spirit.

The Redcoats beat an ignominious retreat, shouting fearfully as they go. It’s a total rout. The Minutemen fire off a victory volley. “It’s a different story when we go to Canada,” Stone says, upper lip stiffening, pretending to be miffed. “When the first American falls, up there, the crowd cheers for His Majesty’s soldiers, for us.”

The Minutemen march by, some 500 strong, their cadences a bit rusty, which of course is in character. After all, America’s first soldiers were citizens first, warriors second. Hayward yells to his brigade commanders, “Good job!”

Where are you going? a spectator asks the passing militia. Two teenagers in tri-corner hats yell excitedly, “All the way to Lexington!”

As the Minutemen march by victoriously, the fifers play “Yankee Doodle Dandy.” Some of the smallest musicians are kids half the size of their adult counterparts. The spectators cheer lustily. We’re all colonials, when you get down to it. Winning feels good, even if it’s only play-acting, yet this reenactment, Hayward reminds us, has a purpose.

“If it weren’t for the patriots who fought the war,” Hayward muses, “we’d be speaking English today with a British accent. People don’t realize this. Maybe we’d have eventually gotten our independence, like India and the other British commonwealths, but it wouldn’t be the same place we call the United States of America.

“To this day, I still don’t know how we won the war. Knowing about the desertion rates at Valley Forge, no food and clothing, I don’t know how we kept it together. It baffles me. I’ve read so many books and I still can’t figure it out, except for absolute perseverance on the part of the common man.”

5 THINGS TO EAT IN NEW ENGLAND

Lobster rolls and clams are obvious, so here are 5 treats indigenous to the northeast region you should really know about…

THE ETERNAL SUNSHINE OF THE LOBSTER ROLL

It’s the taste of summer 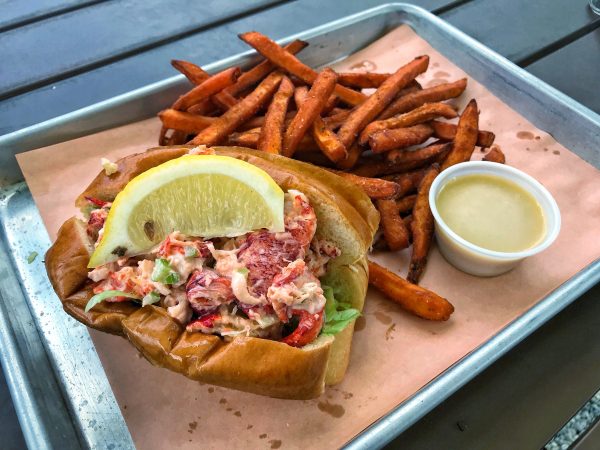