We’ve already genuflected at the altar of George Lois, ​the art director and marketing genius​ from when advertising​, at its best,​ was​ art, not the empty,​​ PC gag​-​reflex so much of it ​has become​.​ But whereas he has been generally, and appropriately, immortalized in the last couple of decades for his Esquire covers​ and ad campaigns, his wife of 70 years, Rosemary, has been less celebrated. That is about to change. George, who has published several books, recently put together a true labor of love, Lewandowski-Lois Paints Machines, a glorious coffee table book of her paintings. 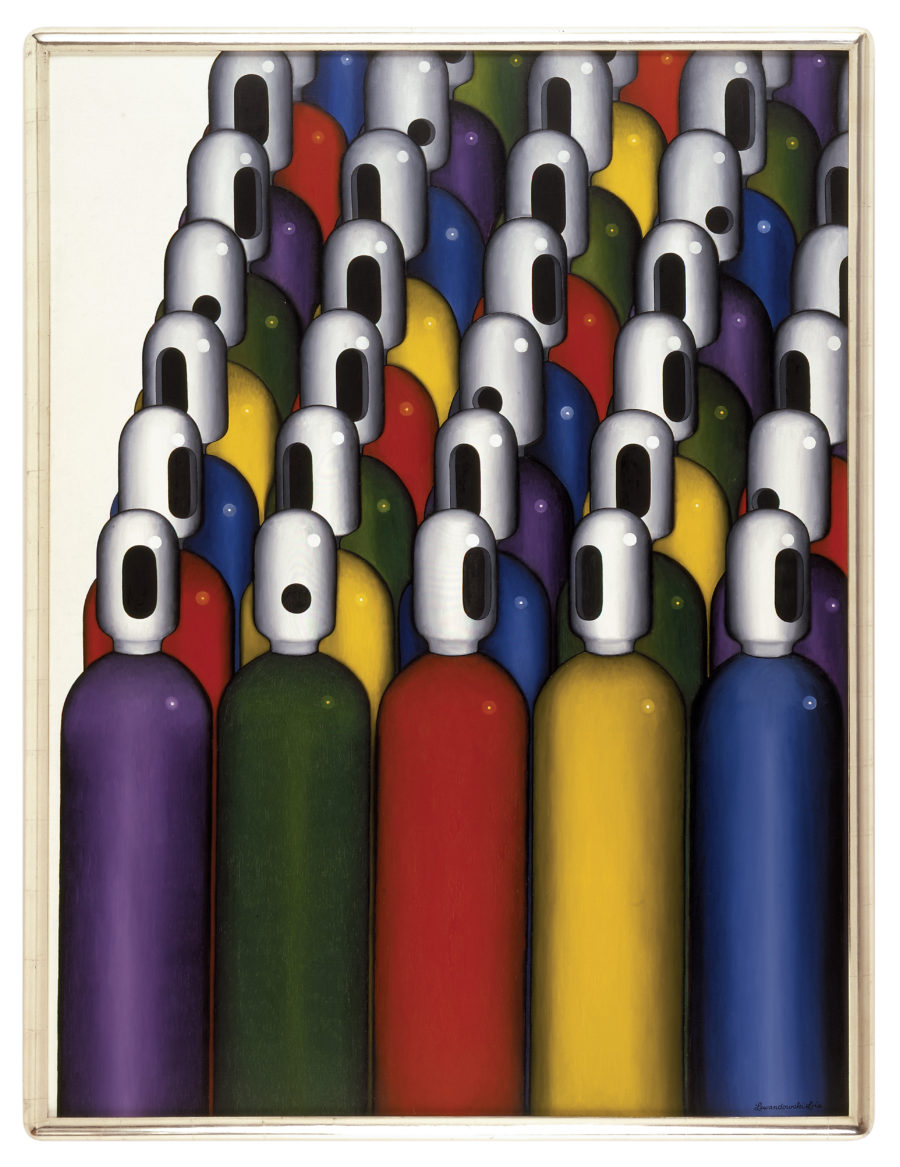 Rosemary Lewandowski-Lois, who just turned 91 and still paints and draws, was born in Syracuse, NY, in the Depression, to Polish American parents who worked in a spark plug factory. Her grandfather worked in a hot dog factory (George writes that his hair turned red from exposure to the food dye). ​These were unenlightened times when it was felt it was a waste of money to send girls to college, or even, really, to keep them in school. But Rosemary’s father sold his war bonds and worked somehow harder to pay for her education, and she, who wanted to be a painter since she was a child, worked on a fruit farm and then as a secretary for window blinds salesmen, and eventually got a scholarship to the School of Fine Arts in Syracuse. 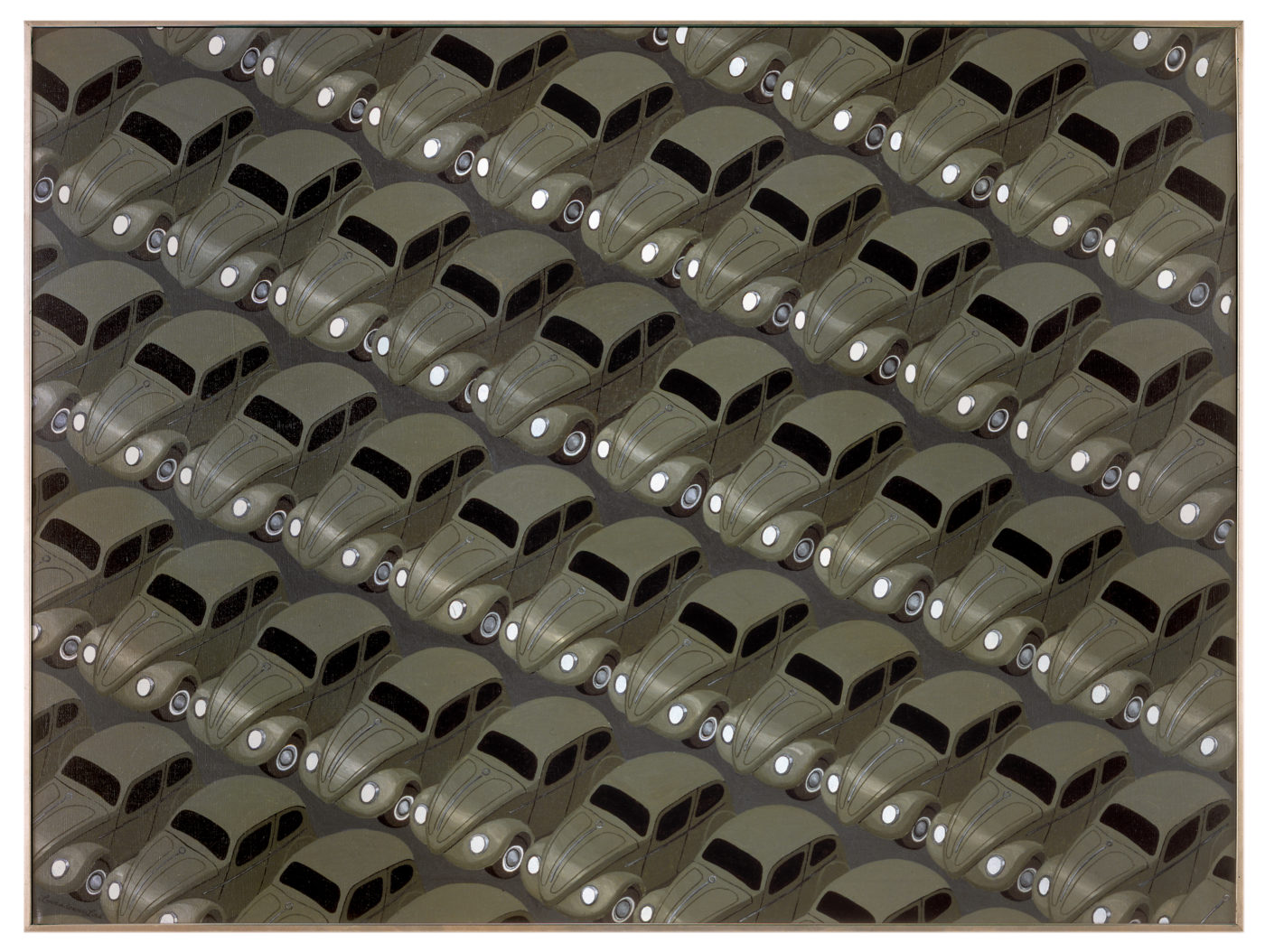 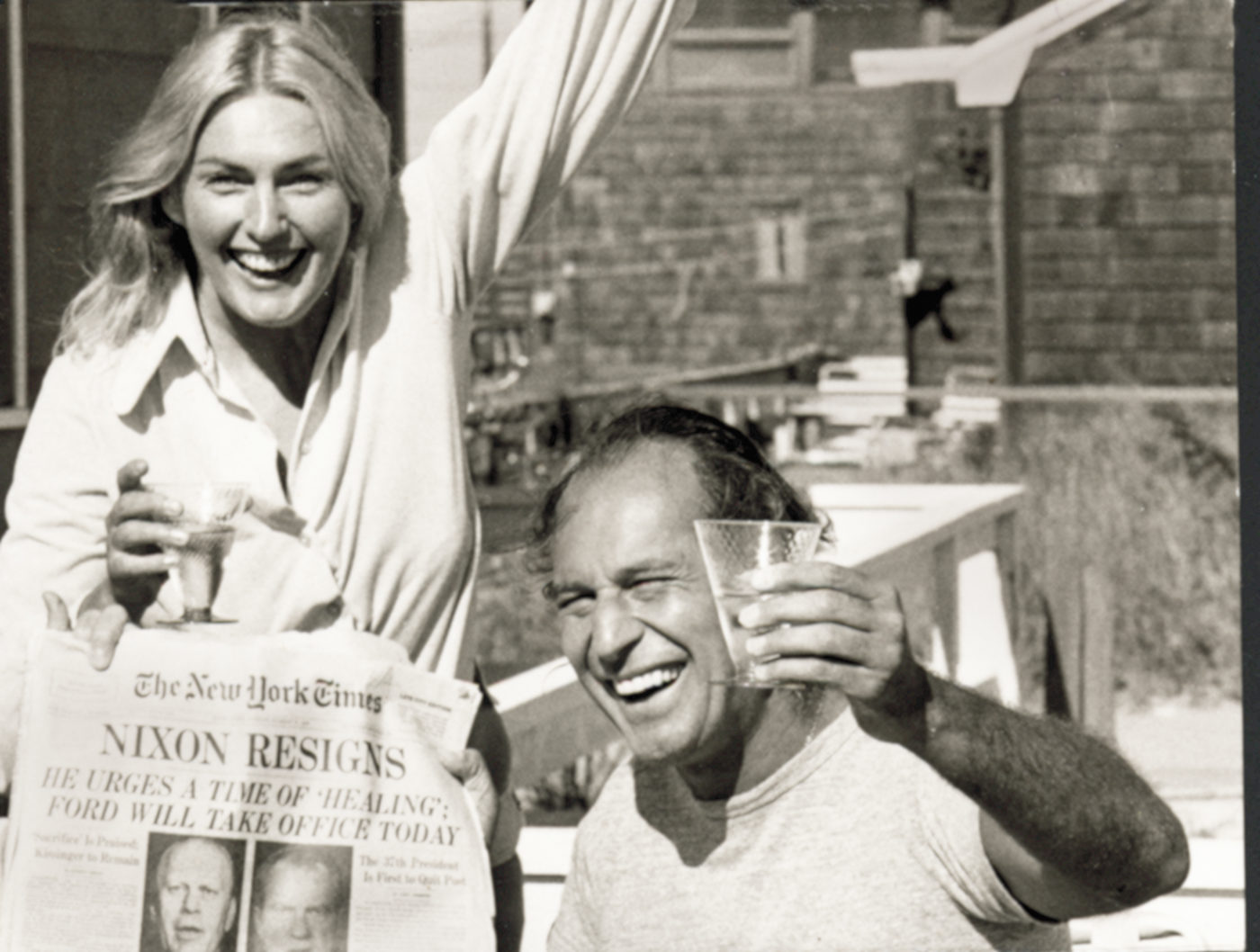 Even she realized how hard it was going to be to make a living as a fine artist and so enrolled in the Pratt Institute in Brooklyn, New York, to study advertising design, where she met George, and “went steady for two years” with him as he puts it, before they married. (“He took me to all the museums in New York City and taught me all I know about art and introduced me to Georgia O’Keefe,” she tells me.) After graduation, she became one of the very few women art directors at the time, working for Fairchild Publications. 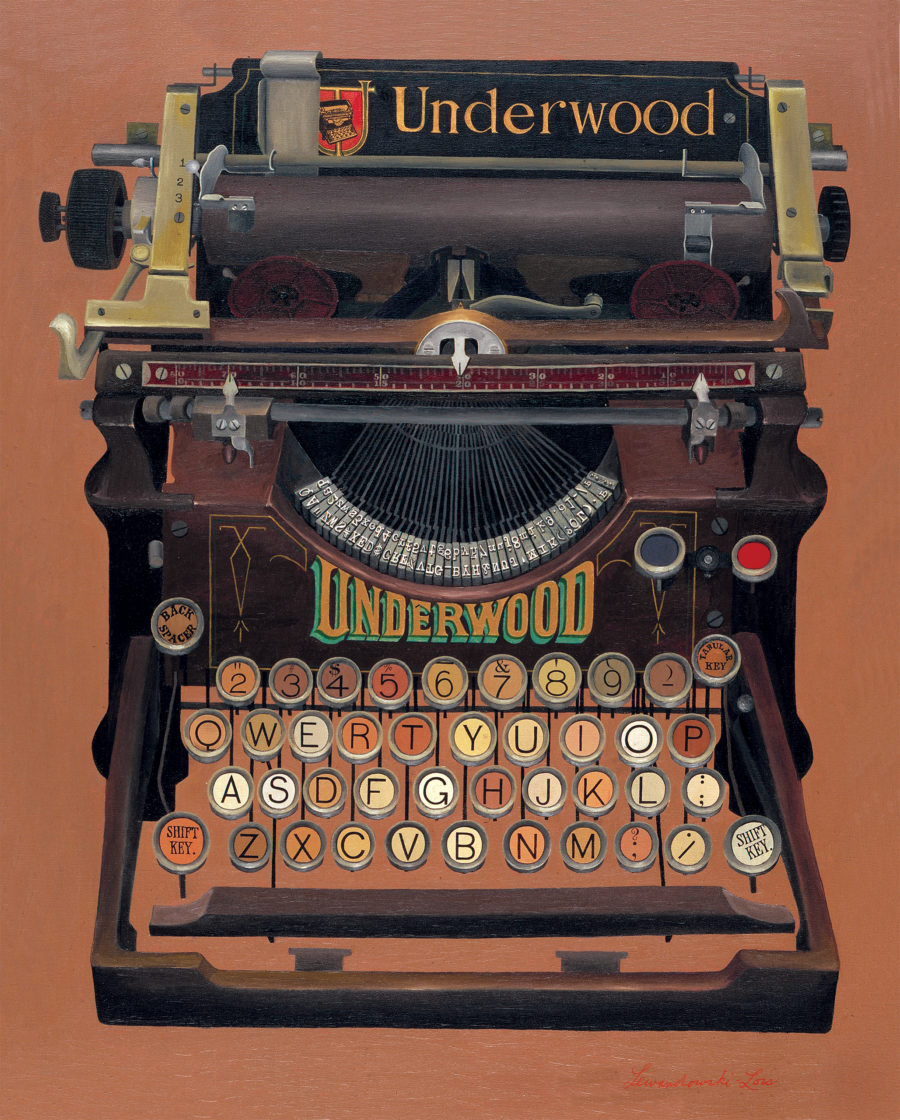 After George returned from the Korean War, his career took off and they had their first child and Rosemary stayed at home to rear him, painting when the boy napped. This book shows a panoply of subjects, and about half of the paintings are portraits. But principally and centrally and most interestingly, she painted machines. All manner of machines. She seemed fascinated by their construction and singular functionality and, as only great artists do, breathed a profundity into the otherwise sterile anonymity. When she had her first one-woman show in New York in 1967 a critic wrote that whereas Leger, the iconic French abstract painter and sculptor, seemed to emasculate machinery by changing it in his work, she glorified it. You can see for yourself here how spot on that is.

“I found an Underwood typewriter in an antique store and immediately fell in love with it. When I realized that the paper under the celluloid on each of the keys was a different color, depending on how often human fingers had touched them, it began my lifelong fascination with the relationships between man and machine,” Rosemary says.

She says her favorite painting of hers is is The Great American Dream Machine. “which I painted (on and off) over a period of 15 years. I am fascinated by the technological forms and vibrant colors – and knowing that the chip was invented by Americans, and changed the world, just makes it even more important to me.” 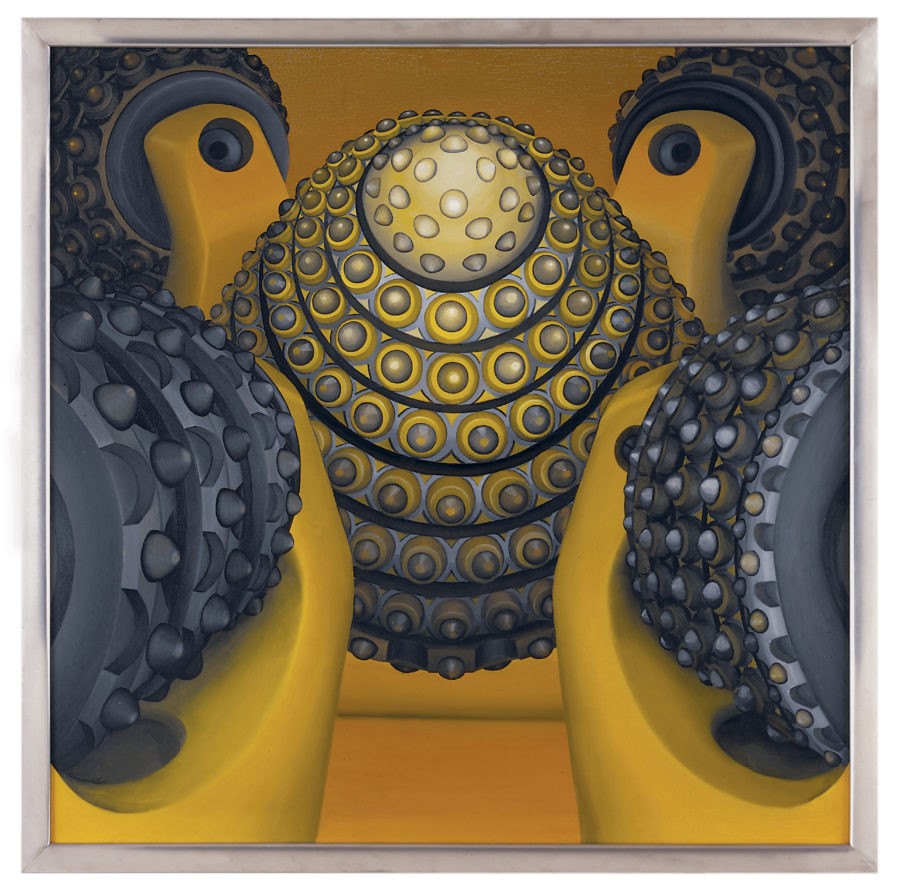 Cutters on the Jarva Boring Machine 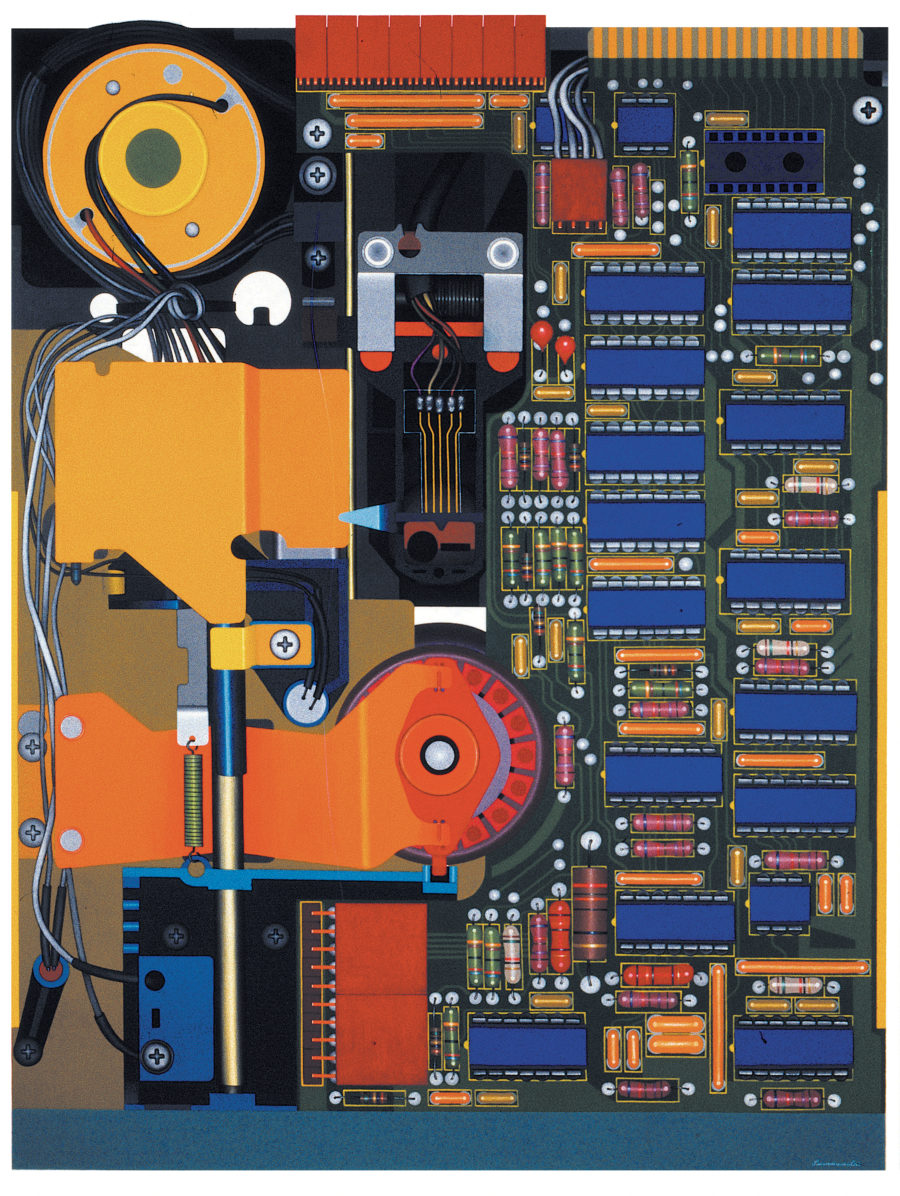 I’m no art critic but I think her paintings are transcendent. Not just good, not just great, but transcendent and transformative. I love her Cutters on the Jarva Boring Machine, which looks like two exotic birds cherishing a divine egg. And her Deardorff Camera, which looks — whether intentionally or not I don’t know — like a mythical animal stretching itself out.

If I knew anything about Art History, I could tell you her paintings are redolent of this German School or that Dadaist moment or other, but I don’t, and I won’t fake it, so I truly can’t say. (I’m not even sure I know what “redolent” means…) But I know they are great paintings and that they belong in any Museum of Modern Art’s permanent collection.

For one of her early sixties paintings, Volkswagens, a 40 x 28 oil on canvas of countless, identical, monochromatic VW Beetles, in rows filling out the frame, their headlights all lit, ARTnews wrote: “In her thought provoking painting, Lewandowski portrays an army of advancing VWs, an ominous parade of silvery-gray, army-green Nazi vehicles with windows painted black. Her fusion of exquisiteness and camp is startlingly effective — a fresh, early pop note.” Whilst highly complimentary, hence the quote’s​ inclusion, I can’t help thinking that, as useful writing, it’s a bunch of nonsense. For one thing it’s had to see the cars as either silvery or green, let alone both, and the Nazi’s had long been dispatched and are, frankly, more of a menace today than they were in 1965.

In my mind, it’s just a beautiful picture of the uniformity and order and perhaps reliability of machines. And I think the headlights being on, completely ignored​,​ by the way​, ​by our luminous​ vessel ​of art-speak, are an important, enigmatic aspect. 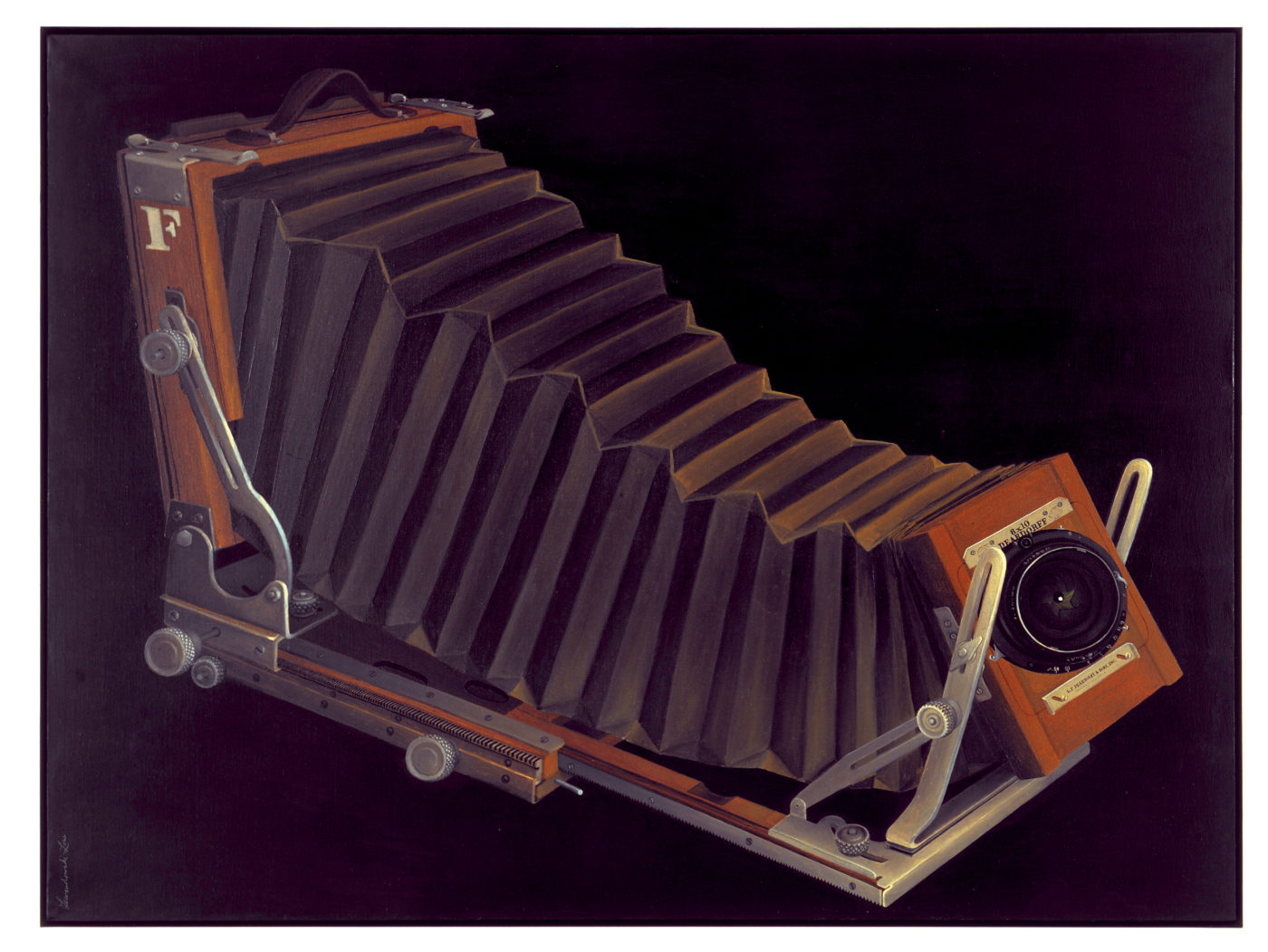 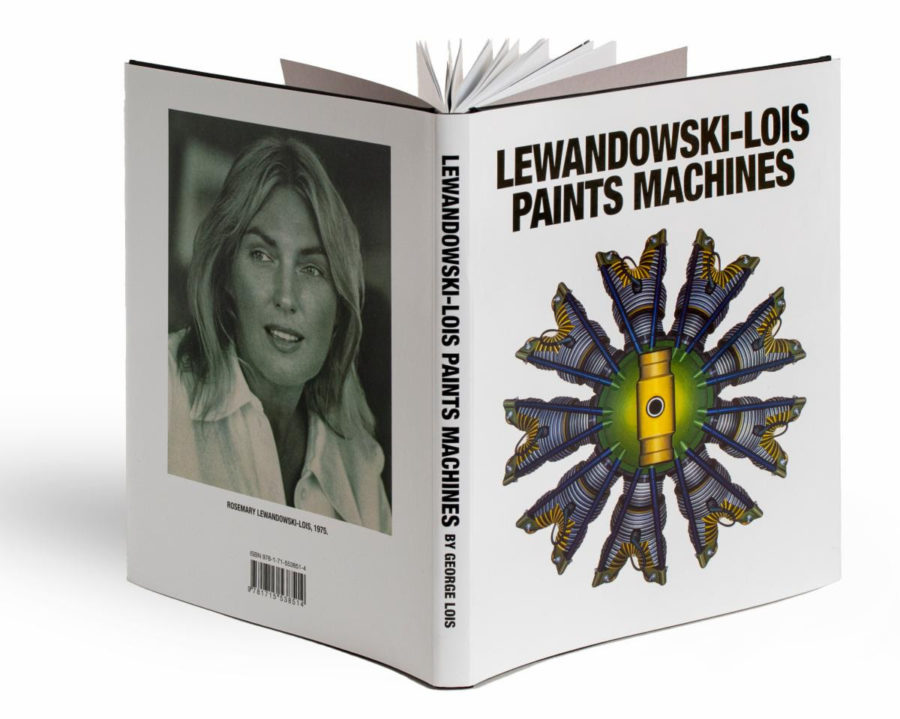 Flights of fantasy: Emily Mitchell draws inspiration from the raw beauty of Vermont for her extraordinary paintings

Tourists is a new hotel in the Berkshires, for art and other lovers 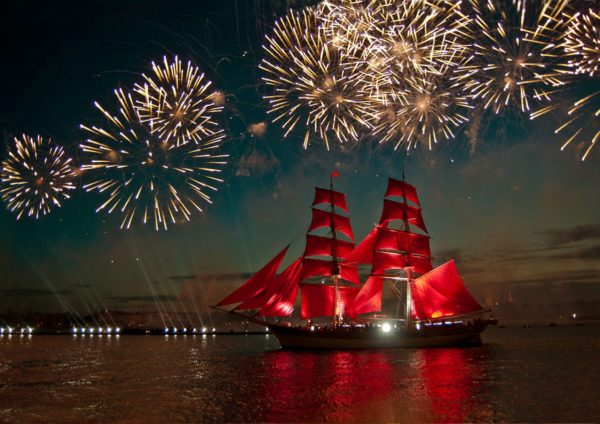 The red sails from The White Nights Festival in St. Petersburg