Official notice as to the whereabouts of the MV Astoria, Dec 17, 2020

In Covid pandemic-eviscerated 2020, the MV Astoria, the oldest cruise ship continuously sailing and carrying passengers, finally ran aground, metaphorically speaking, when it’s last (at least for now) operator, Cruise and Maritime Voyages, went bankrupt. In fact, after all the ship had been through in 72 years at sea, it’s undeservedly ignomious ending saw the ship being arrested by UK Maritime & Coastguard Agency officers in June, 2020, when it was suspected of being about to set sail to escape British jurisdiction without arranging for the obligated repatriation of its foreign crew members, who were stranded in the UK by the pandemic and the bankruptcy.

Originally constructed in 1948 as a transatlantic liner, the MS Stockholm, the jewel of the Swedish American Line, has had a storied history which includes a shipwreck, a spell of Communist cruises, and an attempted pirate invasion.

When the MS Stockholm set sail on her maiden voyage from Gothenburg to New York on Feb. 21, 1948 it was the smallest passenger ship in operation on the North Atlantic route at the time, but the largest passenger ship built in Sweden, if we’re being relative. The ship made international headlines in 1956 when it famously and tragically collided with Italian liner SS Andrea Doria off the coast of Nantucket after encountering thick fog. The Andrea Doria sank after ten hours. 1,660 people were rescued from the vessel just before capsizing, but 51 people died, 46 of them on the Andrea Doria, and five crew members of the Stockholm. One woman, who survived, was launched from her stateroom bed onto the deck of the Stockholm, such was the force of the collision.

The Stockholm made it to New York City, with the bow of the ship completely missing, two days after the incident, and was fully repaired in Brooklyn. Both liner companies blamed the other for the wreck, but neither was conclusively found guilty and  the matter of culpability ended with an out-of-court settlement. 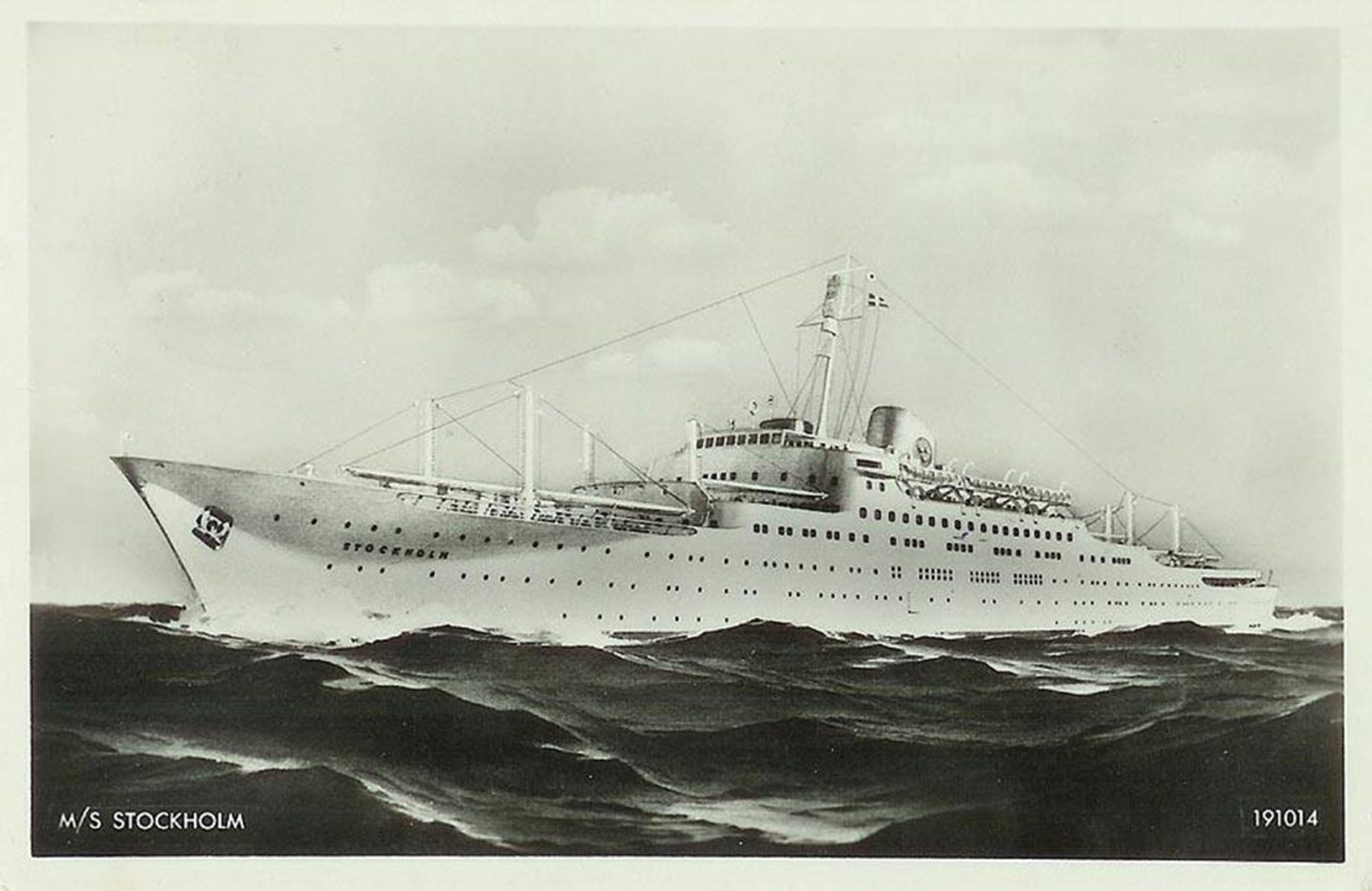 The original Stockholm, built in 1948, for the Swedish American Line ***Cruise & Maritime Voyages***

Many years later, the original bell from the Stockholm was recovered from the sea and is now housed near the gift shop onboard the ship. The bell carries the inscriptions of the names of the five crew members who lost their lives.

In 1960, the Stockholm was sold to the German government and renamed Völkerfreundschaft, or “friendship between nations.” That proved to be a forebodingly ironic name a year later, when the Berlin wall went up and the ship was only allowed to port in communist countries. The ship regularly took communist party members on cruises to places like Cuba, until as recently as 1985, just a few years before the Berlin Wall came down and the Soviet Bloc collapsed. Apparently, passengers frequently attempted to defect by jumping ship.

The vessel saw a complete renovation from top to bottom in 1994 after it was sold to Italian cruise line company, Star Lauro Lines, a line that had it’s own historic problems, particularly with flagship MS Achille Lauro, infamous for being hijacked by the Palestinian Liberation Front, and having two serious collisions and four fires, the last of which caused it to sink in the Indian Ocean — in 1994.

Although many aspects of the Stockholm were modernized for the ‘90s, the ship retained its original stabilizers, bow, anchor and iconic double porthole dining room windows. The ship went through a number of name changes: Italia I, Italia Prima, Valtur Prima, Caribe, Athena, Azores and finally, voila!, the Astoria.

In 2008, pirates attempted to take the ship in the Gulf of Aden, off the coast of Somalia. A US navy patrol aircraft saved it, circling over the ships, eventually forcing the pirates to flee. The Astoria crew had prevented the pirates from boarding by firing high-pressure water cannons at them. 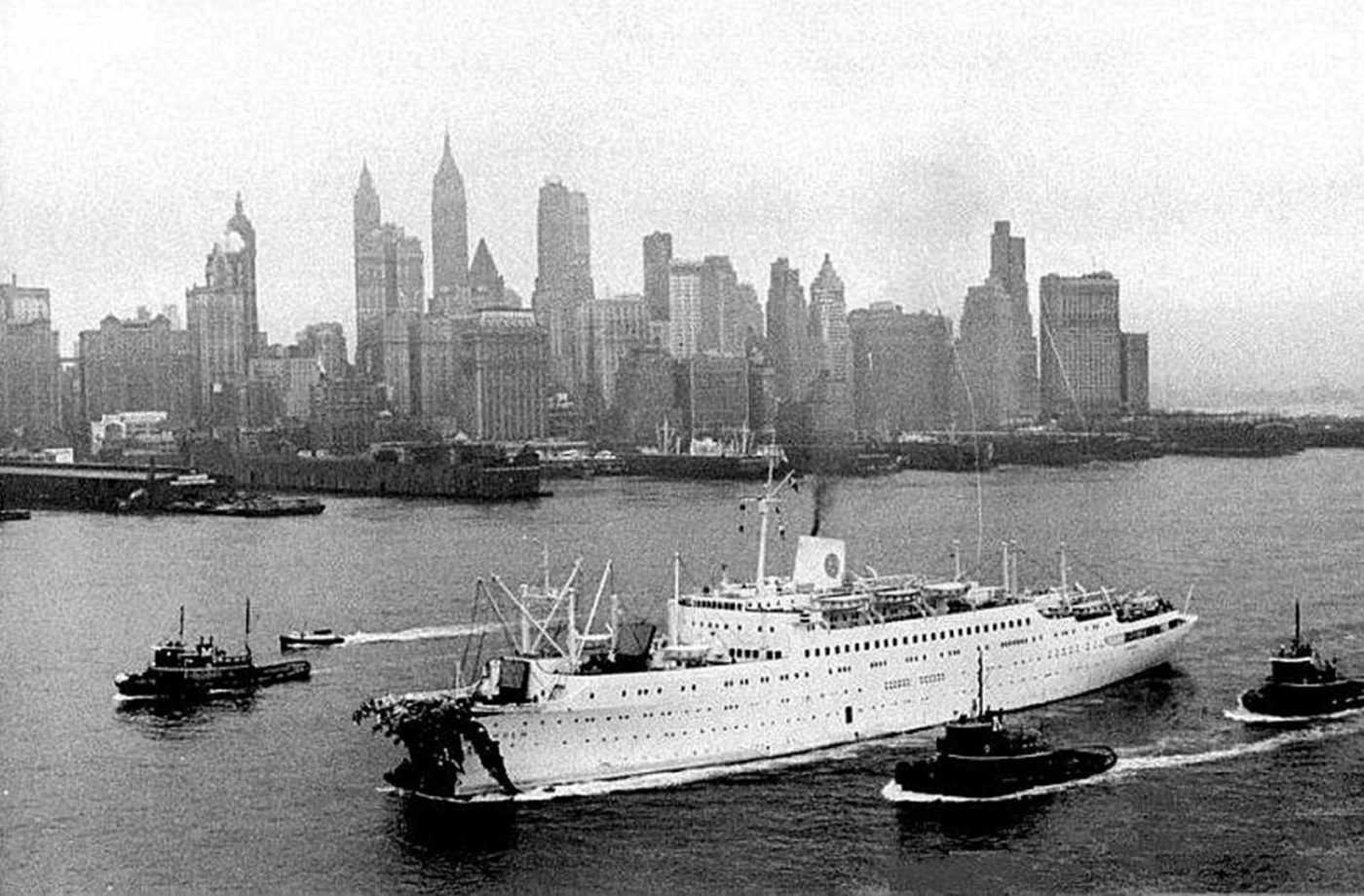 After it’s infamous collision with the Andrea Doria, which sank, the Stockholm somehow made it to Brooklyn, New York and disembarked passengers, all of whom survived ***Maurizio Eliseo***

Today, the inside of Astoria is like taking a trip back to the ‘90s. Warm, dotted rugs are spread throughout the many public rooms, such as the casino, nightclub and chapel. The captain’s club features an intimate sitting area surrounded by nautical plaques with the many ports Astoria has docked at. The Lotus Grill, the vessel’s buffet restaurant, has an Art Deco theme and hand-blown glass art panels lining the buffet counter, which admittedly isn’t very ‘90s, but which in the 1990s was a popular revisited theme…

The Astoria has 277 staterooms able to accommodate up to 550 guests. Each room comes equipped with a small television, a small closet, a bathroom and, for some reason, a mural depicting Athenian ruins overlooking the sea.

The Islands Cruises Transportes Marítimos, a Portugese company, has owned the vessel since 2013 (and still does) but since 2016 it has been operated by Cruise and Maritime Voyages. Some of the final voyages the ship took in 2020 included sailings to Iceland, Scotland, Norway and the Baltics. CMV announced they would suspend operations in late July, as did just about every other cruise ship company in the world.

After CMV went bankrupt it was reported that the great ship has sailed its last voyage, probably to be scrapped, which seems a travesty! Couldn’t it be kept alive as a museum in some harbor somewhere?

An associate at Rivages du Monde, Astoria’s former tour operators, only confirmed that the liner would be decommissioned soon but offered no further information. Former CMV CEO, Christian Verhounig, stated that Astoria was most likely to end up scrapped. A sad, unromantic end for such an iconic, historic ocean goer, and, in many ways, a mythical era sinks with it.

Cruise into this port city’s finest Italian restaurant for dinner. Definitely stay for the drinks 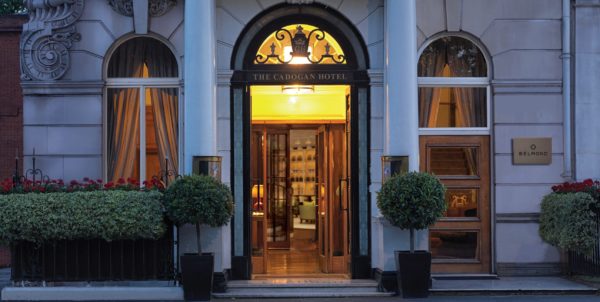