The Kishle, Turkish for ‘jailhouse’, is a fortress originally built during the Crusader Kingdom’s rule over Jaffa in the 12th century, and has been recently transformed into the new Setai Hotel in Tel Aviv, Israel, which opened in May.

This glorious new luxury hotel occupies five buildings which through the ages housed rulers of the many empires exercising control over Jaffa, the southern and oldest part of Tel-Aviv. And until 2005 it was most latterly a police station.

The Jaffa Clock Tower in the district at nightfall

The original building and corridors wrapped around an inner courtyard have undergone a massive transformation and been overall wonderfully restored.  As part of the renovations architects demolished several buildings, then restored the original structure, and added three stories. They dug a basement which unearthed artifacts, some dating to the 12th century, that are now on display in the hotel. The original wooden ceiling and ironwork have been preserved and restored, wooden doors and windows have been recreated to mirror the originals, with all the work performed meticulously by experts in stone, iron and woodwork.

One of the sea facing rooms. Note the historic windows

110 guestrooms and 10 suites all display the ‘old meets new’ design, mixing Middle Eastern and Mediterranean elements with modern style.  A selection of Deluxe Premium Plus, Executive and Premium rooms have breathtaking views from their balconies, and a not to be forgotten Presidential Suite has over 1000 square feet, with a master bedroom, a guest room, plus kitchen and dining area, and an expansive balcony.

The building’s large arch at the entrance bears the seal of Abdul Hamid II, the 34th Sultan of the Turkish Empire, lest anybody doubt the hotel’s provenance. The historic and modern designs continue throughout the luxurious public areas, with vaulted ceilings, doorways with Turkish ottoman calligraphy, modern and contemporary seating and furnishing mixed with ornate carpets, lacquered walls and chandeliers. The multiple courtyards and four levels of terraces, all glass-paneled, offer views from the north of the skyscrapers of Tel Aviv, to the south of the rustic city landscape, and to the west of the coastline and Mediterranean, and to the east the historic Jaffa Clock Tower, one of seven clock towers built during the Turkish Empire’s rule over the city.

It’s hard to believe you are in a major city when this is your roof suite deck. Which, of course, is the point

Below ground in the new basement are five events halls. The spa is spectacular and a unique, serene space for massage and the usual treatments. There’s also a swimming pool overlooking the Mediterranean and a Turkish Hammam/bath -– yes, I had to look it up.

The Jaya Restaurant and the Kishle Bar, both on the lobby level, are already destination spaces and, as you’d expect (and hope) specialize in Israeli cuisines inspired by Jaffa’s culinary heritage and heavily use local products.  The Kishle Bar serves handcrafted cocktails, as you’d suspect they would, and the finest Israeli wines, such as there are. The Mediterranee Lounge is reserved for guests staying in the hotel’s suites — beer and wines, newspaper and books all brought to you while you relax in a comfy chair or sofa. Doesn’t that kind of sound great, about now?

The pool overlooking the Mediterranean

The hotel is situated in the humming midst of restaurants, boutiques, and flea markets, all steeped in the culture and the port of the city. And it’s not far from the Carmel Market, which we featured as one of the 10 places to eat before you die.

It has to be one of the more dramatic new city hotels in the world.

The Birth of the Luxury Hotel

César Ritz and chef Auguste Escoffier invented the luxury hotel. Luke Barr, author of a new book on the pair, explains how 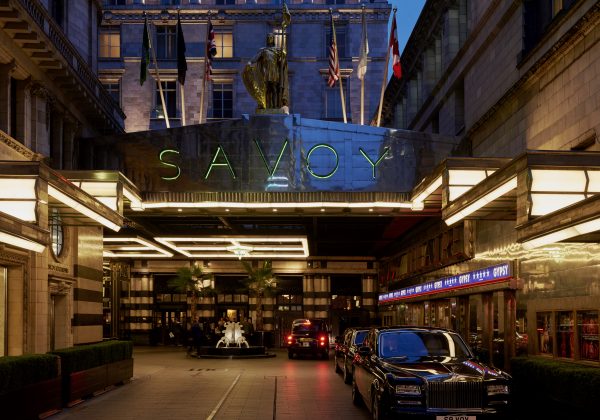